Improved Mechanics For An Improved Taijuan Walker? The New CBA and Your Arizona Diamondbacks

Get to Know Ketel Marte

The D-backs’ early blockbuster trade has mostly been panned as the Jean Segura for Taijuan Walker deal. You can see why — those players are likely to have the biggest impact on the long-term evaluation of the deal. They’re the most talented players in the swap, but this narrative clearly leaves the peripheral pieces on, well, the periphery. The Mariners clearly think they have something in Mitch Haniger and, as Jeff Sullivan wrote recently, the rationale for Seattle likely has a lot to do with the late-blooming outfielder. But how much should the Diamondbacks be counting on Ketel Marte to provide value? Before we can answer that, we need to get a better understanding of the 23-year old shortstop.

Marte was signed at the tender age of 16 out of the Dominican Republic for $100,000, suggesting that he was intriguing but not one of the most highly-coveted players available in the 2010 signing period. He was a lottery ticket, but one that’s paid dividends already since the Mariners made their modest investment. He moved quickly once he made his professional debut, spending one season in the Dominical Summer League at 17, then skipped the Arizona League and headed directly to the Northwest League at 18, facing older competition and performing about as well as you’d expect as a raw 18-year old playing against guys usually two or three years older than him. In 2013, he made the next step up the ladder anyways, playing almost 100 games in the Midwest League where he performed relatively well, earning a cup of coffee in High-A before the year was out. He skipped High-A altogether in 2014 and went straight to the AA Southern League at 20, again holding his own and he got a short stint at AAA as a reward. 2015 saw Marte start the year in AAA where he hit well in the PCL for half a season, then was promoted to the majors where he exceeded expectations. His 2016 campaign didn’t go so well and he became expendable to the Mariners despite playing his second big league season at just 22.

Marte was aggressively promoted throughout his minor league career, skipping several stepping stones on his way to the majors. He didn’t play in the AZL, played only 19 games in the High-A California League, and only played in 65 AAA PCL games before seeing the majors. Regardless, he proved up to the task. Take a look at his offensive production at every level where he’s played at least 50 games (keep in mind, he was just 17 for the 2011 season). 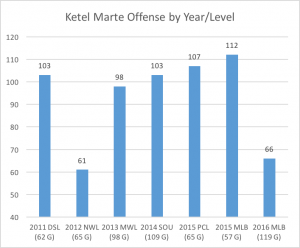 Using wRC+, we can easily see where Marte was above or below average (100). He had more hits than misses in his time in the minors and majors, and while he rarely exceeded league average offense, he was usually at or slightly above that mark while being generally three years younger than the average competition. Having just turned 23 last month, Marte is still young and there may be some room for growth left, and while that growth is more a refinement of skills rather than physical projection, considering him a finished product seems overeager.

But 2016 was bad for him and there’s no denying it. After acquiring Marte, the Diamondbacks seem to imply that they’re not ready to throw the towel in just yet, buying low on a guy who just a year earlier seemed like a budding young contributor. But the wheels did fall off last year and we have to wonder why. At first glance, it doesn’t seem like much changed between 2015 and 2016. Have a look at some key indicators you’ll see what I mean.

It should be noted that pitchers have had a pretty consistent plan of attack against Marte. Over the course of his MLB time, not much has changed. He’s received about 65% fastballs, 19% offspeed pitches and 16% breaking stuff. 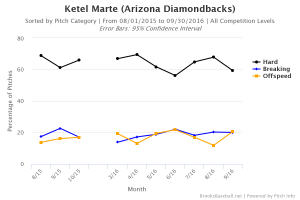 So it’s not as if pitchers began fooling Marte with a steady diet of breaking balls and pitching backwards. But he did perform worse against virtually every pitch classification in 2016 than he did during his rookie debut. Looking within, Marte made some slight changes to his swing in 2016 and maybe that played a role in his depressed production. Have a look at these two images. 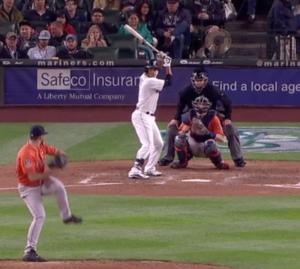 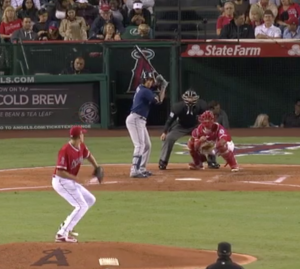 Starting at the base, we see that Marte showed a slightly open stance in 2015 but squared up in 2016. Moving up, you’ll notice the clear drop in his hands as he held them high in 2015 but lowered them some in 2016. His swing is simple with a small stride and light leg lift in both instances. It’s free of a hitch and he’s got a smooth path through the hitting zone in each instance. The set up appears to be where the changes have come and it’s unclear if these changes were made by Marte himself of if they were driven by his coaches in Seattle. We can’t say for certain that these modifications are the root of his drop off, but it seems to make some sense. He’s geared more for power in the first shot, with the bat ready to drop through the hitting zone and his hips already slightly opened. He’s geared more for contact in the second image, with his hands already closer to the hitting zone and his hips square to cover the whole strike zone. Unfortunately, the adjustments didn’t lead to more contact but his power numbers did suffer significantly.

Of clear concern was Marte’s drop in walk rate and his increased propensity to chase in 2016. He walked nearly 10% of the time in 2015 — a solid mark — but that number fell to under 4% in 2016. Pitchers threw him nearly 5% more pitches in the strike zone in 2016, too, so it’s clear that they weren’t avoiding him. Instead, they poured in strikes and dared Marte to hit them hard. He didn’t, and what really undid him was swinging at 6.5% more pitches outside the strike zone last season. He received more pitches over the plate and continued to swing at them, but he chased more and walked less in the process by making strikes out of balls. He was able to make plenty of contact as his strikeout rate didn’t spike, but a more discerning eye, much like the one he showed in 2015, is pertinent for his success as his OBP dropped significantly in 2016.

As a defender at sort, Marte won’t win any gold gloves. He’s not Nick Ahmed with the leather, but projects as something like an average or slightly below average defender. That’s about in line with what you’d expect to see defensively from Segura, but the Diamondbacks felt comfortable moving him off of short though they’ll likely take a different path with Marte who’ll continue to play shortstop. Metrics like UZR and DRS like him better at short than Chris Owings, another internal shortstop option. It’s likely we see some combination of Ahmed and Marte at short this season, with Marte having the added benefit of being a switch hitter. For his career, Marte has posted a 92 wRC+ against righties (Ahmed, 44) but has just a 66 wRC+ against lefties (Ahmed, 72). Even with his struggles, Marte has been significantly better at the plate than Ahmed against righties and nearly as good against lefties. There’s a platoon option available and it’ll be intriguing to see how Torrey Lovullo pencils in his daily lineup considering the offensive and defensive difference between his two best shortstop options.

While Taijuan Walker was clearly the big get here, Ketel Marte will play a big role in how this trade is ultimately viewed. He has some mechanical adjustments, or in this case re-adjustments, to weigh as he make his way to the desert. Will Arizona coaches revert him back to his original stance and swing? Would those changes make much of a difference? Can he get back to laying off pitches off the plate? Marte has his flaws and that’s why he’s not the headliner in this trade. But considering his minor league track record and his age, there’s still reason to hope that he can find a consistent setup and approach that will pay dividends. Nick Ahmed is coming off of a hip injury that landed him on the 60-day DL last season and he’s showed plenty at the plate to know there’s not a lot of room left for growth as he’ll turn 27 before Opening Day. Marte, on the other hand, is still a bit of an unknown in that he’s shown different profiles and is still looking to find himself. Don’t write Marte off as the thin desert air and some likely mechanical adjustments loom on the horizon. Here’s to hoping a new coaching staff can help Marte find his production once again.

11 Responses to Get to Know Ketel Marte