How Big is the Souza/Martinez Gap with a Humidor Installed?

The dust has finally settled in the Diamondbacks’ outfield. J.D. Martinez is now officially in Boston. Steven Souza will presumably play in right and David Peralta will man left. A.J. Pollock will patrol his usual center field. Jarrod Dyson will spell all three D-backs outfield regulars, and maybe Chris Owings will get a few starts out there (which, in full transparency, would be a boost to this author’s fantasy team). It’s an athletic and talented group. Yasmany Tomas is going to struggle to find MLB at-bats and his status is TBD. All three projected starters can be defensive assets and all three are capable of hitting 20+ home runs…

But wait, the guys lining up in the outfield aren’t the only change in Arizona. Chase Field will have a operational humidor in place by Opening Day. Not to toot one’s own horn, but that’s been an ongoing topic of conversation at this website for about three and a half years. Nick Piecoro of AZCentral has been reporting on this topic for the better part of a decade. To say that the installation of the humidor is a surprise would be a farce. This has been on the radar for a long, long time and the day has finally come.

The impacts of said humidor have been studied. Ryan did a fantastic job of breaking down the physics of the matter way back in 2014, looking at estimates from Dr. Alan Nathan, measuring relative humidity, discussing elevation above sea level, and even taking a look at the effects of air temperature on batted balls. If you’re looking for an in-house deep dive, this is the piece to read. The biggest takeaway is the notion that home runs at Chase Field are expected to drop between 25% and 50%. As the article above notes, those decreases are not evenly distributed, but rather change by month as the average temperature and humidity changes throughout the baseball season (see the month of June versus September). If we split the difference and assume there’ll be a 37.5% reduction in home runs, that would be a massive number.  A season in which 140 home runs would have been hit by the D-backs at Chase would drop to a season in which only 88 homers are launched. Taking away 50 home runs is a lot.

The pitchers should be happy, at least. The baseball will presumably be tackier, allowing for better grips that can make breaking balls more effective and help high-spin fastballs spin even more. Those Zack Greinke curves and Robbie Ray heaters up in the zone could be extra effective. But hitters are probably a little less pumped about the change. With that said, the Diamondbacks just haven’t hit that many home runs in recent history (2017 was an outlier, which we’ll look at below). Using home runs hit on the road as a proxy for Home Runniness, the team was 19th in the majors last season. Over the last five years, they rank 26th. It’s not a lineup full of big mashers, but rather a team geared towards hard contact that’s sprayed all over the park. If you were going to install a humidor, this is the kind of team you’d want playing in your park. Of note:

Considering that most of the position player group is back for 2018, we can build a sort of profile here. The team hits the ball extremely hard. They have a fairly balanced attack in terms of batted ball profiles. The grounders at Chase are probably a bit more productive than most other parks given the “baked” nature of the Arizona infield. The fly balls will be a bit problematic thanks to the new humidor coupled with the size of the outfield. Line drives are always good. The approach of hitters has been to use the largest part of the park to do their damage — it’s not a lineup full of pull-happy hitters nor oppo-slapping hitters. If we think about the humidor’s effects, we know it’ll take a bite out of the offense. But perhaps it’ll take a smaller bite out of the offense than, say, if the Yankees were playing half of their games at Chase Field.

Last season, however, the D-backs did an uncharacteristic amount of their offensive damage by the long ball. Observe the numbers for NL playoff teams below:

For a team that doesn’t have prodigal home run power, they sure did hit some dingers last year. But we should remember something important: J.D. Martinez hit a ton of home runs in just two and a half months and provided a bunch of offense via the long ball. He hit over 13% of the team’s total home runs and provided almost 13% of the team’s runs scored by home run after coming over mid-July. That was a torrid pace and we all enjoyed it. 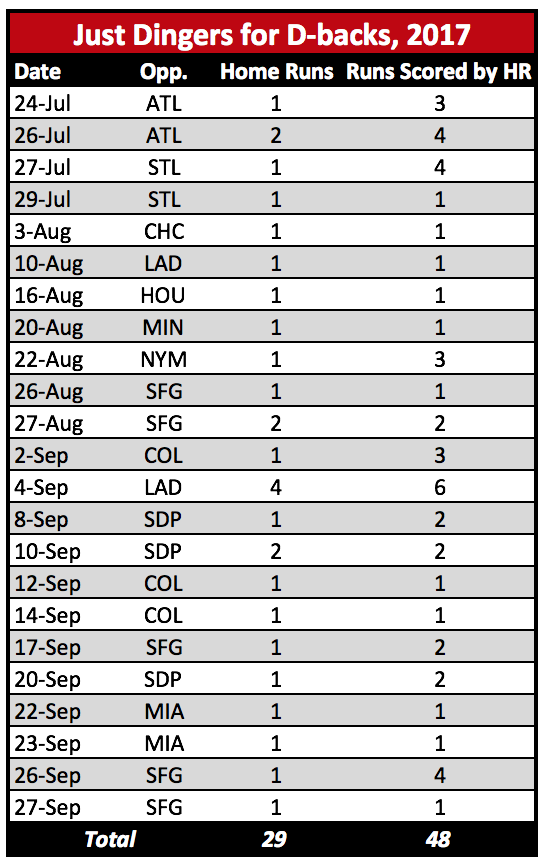 J.D Martinez was the difference between the D-backs scoring runs by the homer like they did and scoring runs by the homer like the Nationals did. It was a big swing (pun intended). For two and half months he played like a god, but he won’t be providing anything to the D-backs in 2018. Martinez has talked openly about his swing changes to deliberately hit more fly balls and it’s worked — he was among the league leaders in fly ball percentage last season. Those fly balls would not have fared nearly as well in Chase Field in 2018 as they did in 2017 for the simple fact that the humidor is now in play.

His replacement, Steven Souza, is a different kind of hitter. Souza hit fly balls about 34% of the time and Martinez hit them at over 43% of the time last year. Souza has tended to hit more line drives (by a small margin) and hits far more balls on the ground. He doesn’t make as much loud contact, but no player in baseball hit the ball as hard as often as J.D. Martinez last year. Replacing that kind of production wasn’t going to happen (even if they retained Just Dingers himself because, well, he’s not repeating a nearly 50% hard hit rate). Souza runs better than Martinez and will steal some extra infield hits while not generating as many fly ball outs. He also won’t hit as many home runs and wouldn’t have even without the humidor. And while I won’t try to tell you that Steven Souza is a better hitter than J.D. Martinez, an argument can be made that his skill set may fit Chase Field’s new environs fairly well. Have a look at some pertinent Statcast data for each hitter: 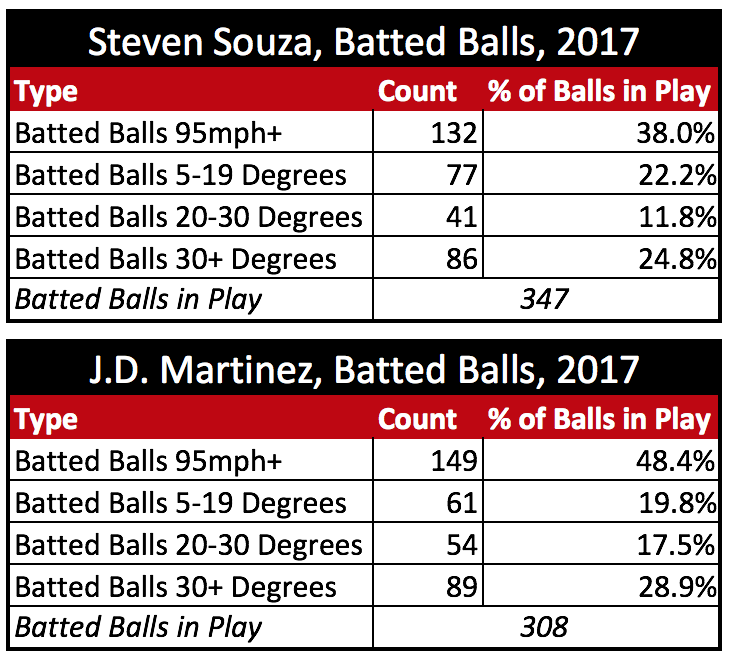 It’s important that we remember something: the Diamondbacks don’t live and die by the home run. They showed a bit more propensity for it last season, thanks in part to Martinez. Subbing him out for an average right fielder, the team would have been at or just below league average in home runs hit, even with Chase Field being their home field. They continue, however, to rank near the top of the league in doubles hit and base running, things that can generate offense in a park with big dimensions. Steven Souza fits this profile better than J.D. Martinez did, and while he’s not as good of a hitter overall, the drop off might not be as big as one may think. And this isn’t factoring in things like base running and fielding, areas where Souza is a superior player to Martinez.

Would the Diamondbacks prefer to take their chances with J.D. Martinez rather than Steven Souza if money and contracts weren’t an issue? Yeah, they probably would. But those things matter and Souza looks to be a particularly good alternative for the D-backs in their new run environment. He’s surely a better option than bringing back a fly ball machine and obviously better than handing the job over to Yasmany Tomas. With the humidor in play, Martinez is still probably the better option, but Souza might not be far off. The production will come, it will just look different. And that’s okay.

2 Responses to How Big is the Souza/Martinez Gap with a Humidor Installed?