Keys to Paul Goldschmidt’s Success: Improved Plate Discipline and Contact on Balls Inside

So what’s the secret to Goldy’s improvement?  I expected to find the answer in Goldy’s platoon splits, but didn’t find quite what I was looking for – I’ll post those findings over the weekend.  I also took a look at Goldy’s plate discipline and swing rates, relying largely on maps from ESPN Stats & Information and statistics from ESPN and FanGraphs.  I was a little surprised with the findings.

But a player who receives more pitches outside the zone hasn’t necessarily exhibited better skill at laying off pitches outside the zone, and while anecdotal evidence is often the farthest thing from reliable, it has seemed to me this year that he’s been pitched around more.  Walk rate tells a story, but it may be that Goldy’s swing rates are most telling.

When you compare these maps of swing rates, it’s readily apparent that Goldy has cut down on his swing rate outside the zone (2012 first, then 2013 through the game of Sept 5): 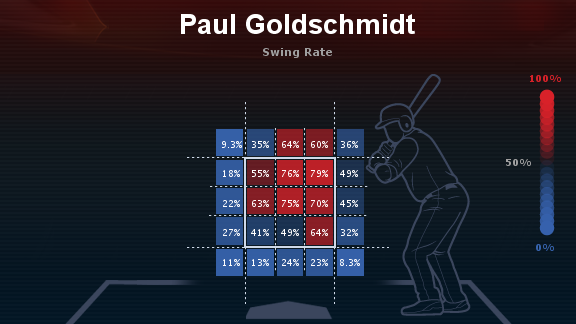 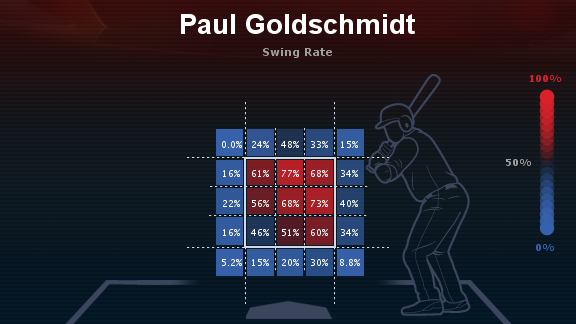 So, yes, Goldy has swung less of the time at pitches outside the zone.  With only one minor exception, each of the 16 boxes outside the strike zone show swing rates that are essentially the same or substantially reduced from 2012 to 2013.  That’s the story that’s told by the 4% drop in O-Swing%, though.

Look at each of the four main directions off of the plate, and despite sample size issues I think we learn something.  In both years, Goldy didn’t swing much at pitches below the zone or away from him.  Above the zone, though?  It looks like that’s where Goldschmidt’s selectivity has been most focused.  In contrast, his selectivity didn’t change all that much inside.  That’s pretty interesting.

It may be that Goldy didn’t really cut down on his swings inside because he’s actually having some success.  Consider the charts below with batting averages when Goldy puts the ball in play, which tell a stark tale (again, 2012 first, 2013 second): 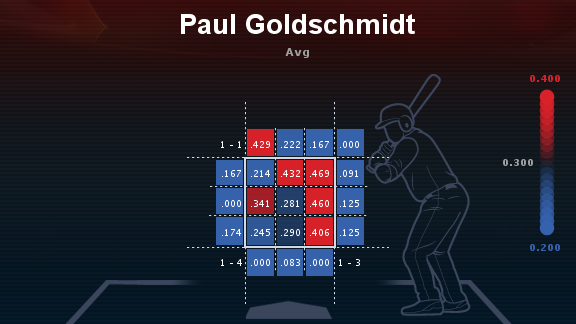 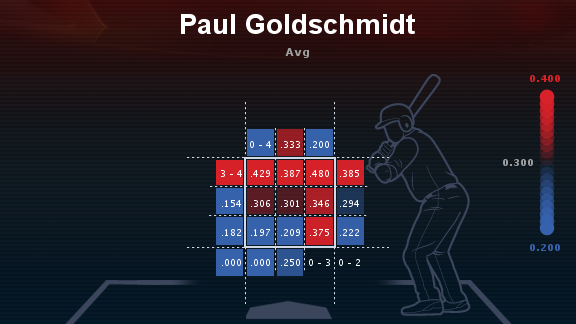 In 2012, Paul Goldschmidt had virtually no success on pitches inside the plate.  Despite that, he was swinging at a pretty good clip – nearly half the time in one box (top, 49%), even though his batting average on those pitches was .091. The other boxes inside (middle, down) were only slightly less awful for Goldy.

Goldschmidt hasn’t done better with inside pitches because he’s laying off of them a lot more – he’s doing better with them because he’s doing more with them.  He’s hitting a respectable .294 middle inside, and an outstanding .385 top inside.  Goldschmidt has always been a high ball hitter, but now you can’t really jam him – even if you come off the plate a bit, he can still kill you.

The success on balls inside and balls up and in may have come with a cost, however – Goldy isn’t doing as well reaching the far parts of the plate.  You can see this in the charts just above, with batting average decreases on pitches down and away, down middle, and middle away.  But it’s a little more obvious when you see it in heat map form: 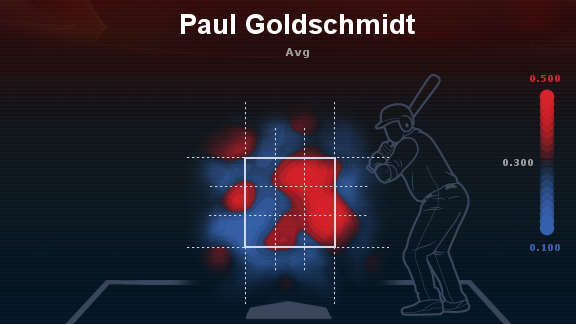 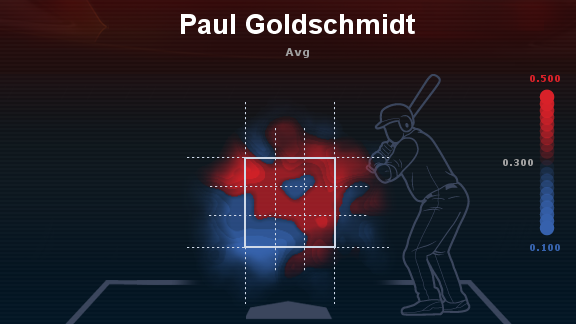 Note how the 2012 heat map shows almost no red up and off the plate inside, but shows Goldy commanding middle down and down and in.  The 2012 Paul Goldschmidt had really just one “happy zone” — it looks like he’s become more adept at moving the head of the bat in and out.

Working theory?  Pitchers discovered last year that they could jam Goldy, and at the beginning of the year, he made an adjustment (the stance doesn’t look more open, so he may be standing a little bit more off the plate or just looking for pitches in).  Goldy had a grand old time, perhaps until lately – it seems like he’s been getting a steady diet of pitches low and away in the last few weeks.  It remains to be seen, maybe, whether Goldy can continue to make adjustments to stay ahead of the league – but he’s done a pretty good job of it so far this season.

4 Responses to Keys to Paul Goldschmidt’s Success: Improved Plate Discipline and Contact on Balls Inside