Expanding the Zone with Runners in Scoring Position: Is Goldy an RBI Man?

Are some hitters particularly well-suited for RBI-likely spots in the lineup not just because of hitting prowess overall or tendency to hit for power, but also because they find ways to get guys in? The saber community has pretty much dispensed with the idea of “clutch” being a skill (which is not to say that some players have not been clutch). But occasionally, especially when scoring one run is the priority (rather than as many as possible), it may be the case that expanding one’s strike zone can be favorable to one’s team.

I’m going to start with the premise that if hitters could hit better simply because they wanted to, given the situation, they’d do so regardless of the situation. But that doesn’t mean they can’t try for different outcomes. For instance, can a hitter try to hit one to the right side, if they’re trying to move a runner over from second? Can he try to hit it in the air in a sac fly situation? I believe the answer is yes. And while the question of whether they’re doing it is different from whether they should do it, we can still learn from how hitters alter their behavior with runners in scoring position.

For instance, last season Paul Goldschmidt had a “chase percentage” of 20.8% — that is, he swung that percent of the time at pitches out of the zone (contact or no contact). He was more selective than the league average qualified hitter (27.6%). With runners in scoring position, Goldy’s chase percentage stayed essentially the same (20.7%), whereas the league average jumped up a tick to 28.5%. Here’s how the 2013 swing and chase percentage break down for Goldy and the 139 qualified hitters from 2013 (huge thanks to ESPN Stats & Info):

We have a bit of a sample size problem with respect to Goldy’s numbers, but it’s clear from the league averages that most hitters do in fact swing quite a bit more often with runners in scoring position (46.6%) than when the bases are empty (44.7%). That’s significant, although we may have a lurking variable here — leadoff hitters (who may tend to prefer walks) may be over-represented in the bases empty group. Hitters appear to swing most often when there is only a runner on first base (47.1%), and that was true for Goldy, too.

It does not appear that Goldy expands his strike zone with RISP, though. How does that compare to other hitters generally thought of as RBI men? Here are some of those folks (Mike Napoli, Carlos Santana, Jayson Werth), selected with the help of Brian Kong-Sivert from a set of hitters whose overall swing rates were similar to Goldy’s. 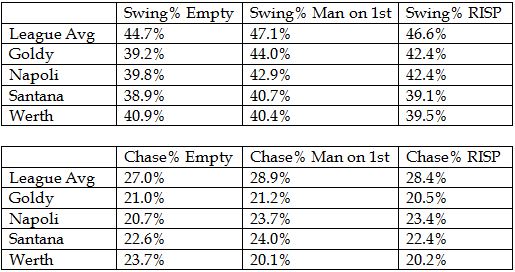 In the “RBI Men” group of Goldy, Napoli, Santana and Werth, just Goldy and Napoli swung significantly more often with RISP than with the bases empty. Santana’s rate stayed pretty much the same, and Werth’s went down a tick.

What’s really interesting is that only Napoli seems to have swung more at pitches outside the zone — 23.4% with RISP, as opposed to 20.7% with the bases empty. It seems that some RBI Men, like Goldy, Santana and Werth, do not actually expand their strike zones with runners in scoring position.

But that doesn’t mean they didn’t swing more often. Like Carlos Santana and Mike Napoli, Paul Goldschmidt did swing more with RISP overall. Even Jayson Werth seems to have increased his swing percentage at balls inside the zone, and that seems to be a common thread for RBI men in RBI situations.

Check out the swing rates below for Goldy for 2013. The first is for bases empty, the second is for RISP. Once again: huge thanks to ESPN Stats & Info. 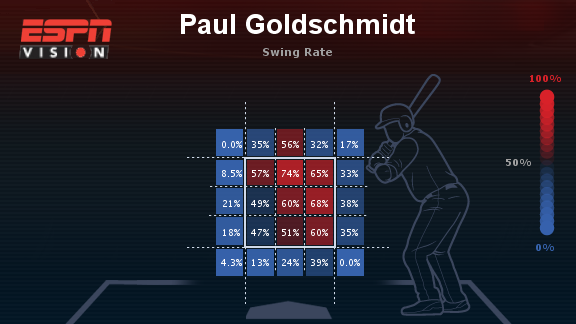 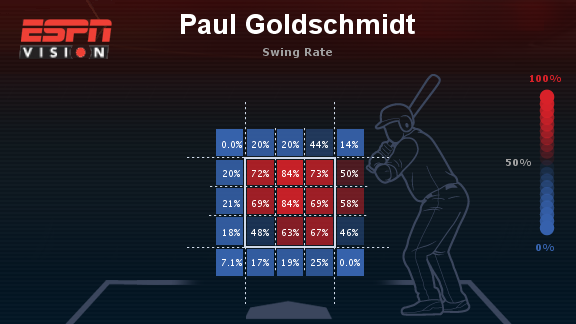 Two things that are extremely apparent from these maps:

1) Goldy does seem to expand the zone in one way: pitches inside. In RBI situations, Goldy appears to be more willing to swing at pitches off the inside of the plate. His Chase% does go down with RISP, but he appears to make up for that with fewer swings above the zone.

Goldy was looking for pitches to drive with RISP, it appears, and he was comfortable gambling that he could drive pitches in off the plate. For good reason: as I found in early September of last year, one thing that fueled Goldy’s breakout in a big way was a much better contact percentage on pitches in off the plate. He was swinging at those pitches more not just because runners could be driven in, but because he could actually hit them.

2) Goldy does swing a lot more in the zone with RISP. Look at all the red! With the possible exception of low and away, Goldy swings more in all nine sectors of the strike zone when there are runners in scoring position, at least in contrast to when there are no runners on.

And here’s where Joey Votto can help shed some light. Votto’s refusal to expand his strike zone with RISP doesn’t go over well in some baseball circles: his Chase% actually drops from a ridiculous 15.8% with bases empty to an even more ridiculous 15.5% with runners in scoring position. Despite swinging very infrequently at pitches outside the strike zone, however, Votto does seem to swing more inside the zone with RISP, just like Goldy, Napoli, Santana and Werth. Bases empty first, RISP second: 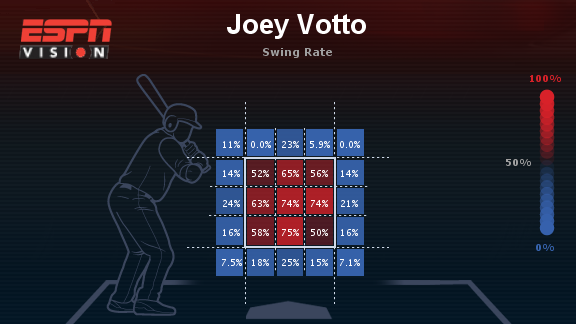 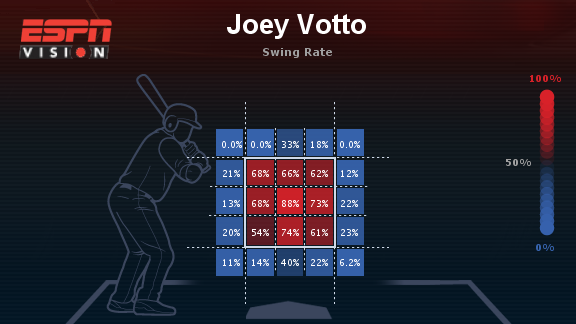 Who knows, maybe Votto really doesn’t think he can hit a ball well if it’s out of the zone. Maybe he thinks that if he starts to expand his zone, he’ll only get more of those borderline pitches. But while Votto is also pretty selective overall, he seems to be much more willing to swing at pitches in the zone. Maybe Votto doesn’t expand the zone so much as expand the pitch types/selection at which he’s willing to swing.

As for Goldschmidt and the other RBI Men, the question remains for a later day about whether they should expand their zones in RBI situations (although Goldy clearly did well in expanding his zone in off the plate). Nonetheless, I think we have enough here to conclude that at least some RBI Men do expand their zones with runners in scoring position. RBI Men do change their behavior when the situation calls for it, although the change in behavior seems to be much more a matter of swinging more frequently overall than of swinging at outside pitches.

2 Responses to Expanding the Zone with Runners in Scoring Position: Is Goldy an RBI Man?