Struggles Versus LHP, Not Versus Inside Pitches, Seems to Motivate New Parra Batting Stance

As has been reported by Nick Piecoro and others, Gerardo Parra brought more than just a new one-year contract with him to spring training this season — he’s also changed his batting stance. According to the Piecoro report, the new stance is less open, with his front foot a little closer to the plate and his right leg bent before the pitch. Last week, Steve Gilbert reported that the intent with the new mechanics is to get to inside pitches better.

In Piecoro’s article, by the way, he notes that offensively, Parra was “essentially two different players one half to the next.” His numbers did indeed go down, but I’ve assumed a pretty simple explanation over the last few months: Parra’s enormous platoon split. Early in the season, Parra was fighting for playing time with Cody Ross and Jason Kubel. He sat more frequently, but more importantly, when he sat it was usually against LHP. In the second half, I thought, Parra was called on to play almost without rest. Overall, Parra’s PA against LHP did rise from 22% or so in 2011-2012 to 29% last year. But it doesn’t look like that explains everything. Here are Parra’s triple slash stats divided into first half/second half and LHP/RHP:

Against RHP, Parra was pretty damned good all season. The dropoff from his first half to second half was negligible. Against LHP — a completely different story. Parra managed a respectable line against lefties in the first half. Note Parra’s outstanding OBP against LHP in the first half (.349 in 129 PA). Parra had just 71 PA against LHP in the second half (which is shorter than the first “half” by about 20 games), but did absolutely nothing: .118/.143/.132. Those horrendous 71 PA dropped his overall OBP against LHP to a measly .276, and his season OBP to .323.

Keep in mind, Parra was not terrible overall last season. Offensively, he created runs at a clip just 4% below average for a hitter (96 wRC+). But against RHP, he hit like Aaron Hill (121 wRC+), and against LHP he hit like Tuffy Gosewisch (39 wRC+). That’s a pretty big swing from 21% above average to 61% below it, and the promise of an improvement against LHP, any improvement, could turn an already very good player into an outstanding one.

Thanks to ESPN Stats & Information, we can dig a little deeper. Click here to see how Parra fared all over the strike zone (in batting average). It doesn’t seem like he had more trouble covering the inside part of the plate. Once we look at how he fared against LHP versus RHP, though, we get a different story:

Once again, we see that Parra had excellent plate coverage against RHP (on the left). But in the chart for LHP, it looks like Parra did struggle on the inner third of the plate. Given that he also had problems up and outside and middle outside, I’m not sure we have enough information to draw a conclusion. Still, it turns out that against LHP, Parra swung more frequently in that up and in ninth of the strike zone (78%) than in any other ninth (although up and away, middle middle, and middle down were all near 75%).

Parra’s contact rates were also very good — he made contact when swinging in the zone 92.3% of the time. But take a look at his contact rates once you slice up the strike zone: 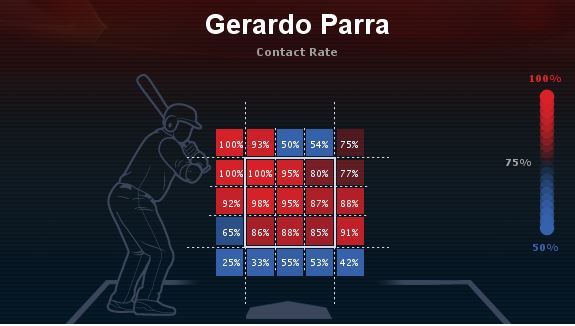 It’s very common for contact rates to go down on the outer third of the plate — think about where you’d hold the handle of a hammer if accuracy was important. But the premise of Parra’s new batting stance, I thought, was that he was having trouble getting to inside pitches, and it doesn’t look like the data support that. Up and in, Parra hit the baseball 40 times of the 40 times he swung. The problem may be that he actually fouled those pitches off a whopping 36.8% of the time, and only 5 of the swings turned into hits (two of which were home runs).

From contact rates, it doesn’t look like Parra’s problem was getting to inside pitches. But if Parra had less time to swing against LHP, it might be that he didn’t get to load properly, and he couldn’t hit the ball as hard. Parra’s very poor slugging numbers against LHP (.226, .476 vs. RHP) tell that story. But it’s also very clear in his line drive rate.

The league average line drive rate was 21.2% last season, and against RHP, Parra topped that: 22.8%. But his line drive rate against LHP was far, far lower: 12.4%. And by breaking that down by pitch location, we can finally get to this “trouble inside” evidence:

Parra was able to hit the ball at a line drive angle no matter where the pitch was thrown — if it was thrown by a right hander. That’s not the problem. The problem is that he had very little success hitting the ball accurately against LHP, especially if the ball was thrown inside. Up and in, Parra hit no line drives against LHP. But even the line drive evidence does not suggest a large problem inside. The real problem seems to be LHP in general.

If Parra gets less time to make swing decisions against LHP, then I absolutely agree, being able to swing more quickly (front leg already bent, etc.) could be a help. But why in the world can’t he just move back in the strike zone, as well? He’s cheating himself of about a foot of distance in every at bat, which is like the mound being 59’6″ away instead of 60’6″ — not a minor concern. If he’s having trouble getting to inside pitches and a new batting stance will help, then I’m all for it. But if he thinks there’s a problem worth fixing, I’d be curious to know why he won’t also try moving back in the batter’s box.

5 Responses to Struggles Versus LHP, Not Versus Inside Pitches, Seems to Motivate New Parra Batting Stance