Ziegler’s Extremely High Value, and Why He Shouldn’t Be Traded

It’s not that often that relievers like Brad Ziegler come along. Many teams have lefty relievers with low arm slots whose mission is to get lefty hitters out — but few have righty matchup guys, and fewer still have righty matchup guys who can generate ground balls at a rate even approaching Ziegler’s. This is, in large part, why we were thrilled with the extension that the D-backs signed with Ziegler in December.

It’s not that Ziegler is extra valuable just because he’s unique, exactly. Especially on the position player end of things, it doesn’t matter how you produce value (power, average, fielding, etc.), it just matters how much value you produce. In terms of winning baseball games, anyway. And that’s not necessarily an easy concept to grasp. Said our Jeff Wiser about Kevin Towers earlier this season:

Kevin Towers has sought out the label rather than the production when building his team. He wants “sluggers” and “aces” and “veteran arms” rather than players who have shown solid peripherals that backup long lasting, consistent production…it all becomes a series of trade-offs where you give up defense for offense, positional flexibility for production or a quantity of innings for quality of innings.

As Jeff noted, just as with position players, the type of starting pitcher doesn’t really matter; what matters is production. Sure, there are some types of pitcher profiles that are more reliable than others (fly ball pitchers are prone to a lot of fluctuation, for instance), but a starting pitcher enters every game with the same situation: none on, no outs, and nine innings to play.

You see where I’m going with this: relief pitchers are different. They’re different because a team can manipulate the situations in which they’re introduced. Up one run with one out and runners on second and third, you want some kind of strikeout king up there, because most other outs in that situation will score a run. That’s true even if your strikeout reliever is no better than another option overall. In that situation, the guy with the higher strikeout rate is more likely to help the team succeed.

Most teams have strikeout guys. Most teams would prefer more, but there isn’t a massive shortage of relievers with strikeout rates over one per inning. Strikeout guys aren’t extra valuable through being rare, necessarily — they’re valuable, typically, only in relation to how good they are overall.

The other two are the same man: Brad Ziegler. From a piece on why Ziegler’s extension was so good:

For what it’s worth, the GB% leaders for those years among qualified starters were Justin Masterson (58.0%, 2013) and Trevor Cahill (61.2%, 2012).  Not even close to Ziegler, and it’s not even a sample size issue (there’s more potential for variance with smaller samples) — Ziegler has pitched 393.2 innings, and he’s got a 66.1% GB% for his career…Even among great groundballers, Ziegler stands alone — I think we all remember the GB prowess of Chad Bradford, but for the portion of his career for which FanGraphs has GB%, Bradford’s career percentage was 63.7%.  He topped out at 66.5% in 2008.

Ziegler is a unicorn, with only legends of other unicorns in existence. And consider this: of the top fifteen relievers by GB% this year, only one other pitcher (#10, J.P. Howell) has a K/9 over 7.08. Ziegler’s is 8.01 — that’s really quite good.

At first glance, it might look like Ziegler has been lucky this year. League average for batting average on balls in play is .298 so far this season. But against Ziegler, hitters have had a significantly lower .242 BABIP.

But that’s not luck. Why? Because so many of Ziegler’s batted balls are ground balls, which fall in for hits a lot less than line drives. Ziegler’s line drive rate is tied for 10th-best in the majors, and that takes away a lot of batted balls that become hits approximately 70% of the time. A big reason? Ziegler never pitches in the top half of the zone. No, really, I mean never. From ESPN Stats & Info: 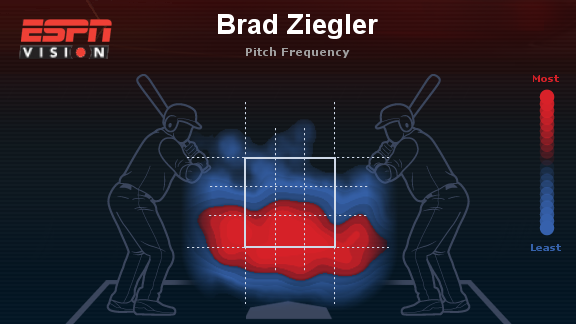 In addition, Ziegler has the 6th-lowest fly ball percentage in the group of 155. His fly balls have turned into home runs at about a league average rate, but that really doesn’t matter if you’re not giving up many flies, now does it?

But back to ground balls, which typically fall in for hits about 20% of the time. Yes, Ziegler has a lower than average BABIP because so many of his batted balls are on the ground. But not all ground balls, even, are equal; against Ziegler, you put the bat on top of the ball more often. And that also means that fewer of your ground balls are the type of hit that could shoot through the hole if it finds the hole; more of your ground balls will be that kind that makes it look like the batter is trying to kill a groundhog that lives just in front of home plate.

Ziegler ranks near the top of the league  (11th) in “soft hit average” among relievers with at least 40 IP. Courtesy of ESPN Stats & Info, here’s how Ziegler has stacked up in that stat the last three years (other seasons, min 60 IP):

Yeah, that’s right: Ziegler has been the best reliever in the last three seasons at inducing weakly-hit balls. Ziegler is an excellent reliever, who, by the way, happens have this one skill that extremely few other men have. But just how valuable is that ground ball skill?

Ziegler doesn’t always come on with men on first. But when he does, he prefers dos equis on the scorecard. The man kills in twos, is what I’m saying.

Last season, Ziegler was relied on to be the closer for a few months; for that reason, he wasn’t inserted mid-inning quite as often as he’s normally been, and consequently he had fewer chances to record a double play. In 2013, Ziegler saw 58 “DP opportunities,” as I defined it in this Beyond the Box Score post. He recorded 8 (13.79%). In 2012, Ziegler had 70 “DP opportunities,” and he recorded 20 (29.58%). That’s ridiculous. In 2012, he recorded DPs in DP situations more at a higher rate than the best strikeout pitchers got strikeouts. If you don’t think that has a lot of value, you’re kidding yourself.

That same Beyond the Box Score post was my opus on how elite GB% relievers like Ziegler may have extra value, and if you’re into that kind of thing, I’d recommend a look — John Choiniere collected amazing research for that point. But here’s the punch line:

If elite GB% RPs have a chance of converting a DP opportunity that’s about 7% higher than league average, then over 60 opportunities, we’d expect to tally about 4 additional DPs. Our DPs have not been GB-specific (lineouts do happen), but since we’re talking about GB relievers, I’d be most comfortable assigning a -0.85 run value to those 4 DPs. That’s 3.4 runs — good for about 0.3 wins. If a freak like Brad Ziegler or Seth Maness could demonstrate a real ability to convert DPs at a level above the 20% mark — let’s say, 25% — that could make a real difference, but only up to about 0.5 wins.

A half win — just from double plays. That says nothing about how Ziegler is an excellent reliever anyway, how his pitching profile means that he’s much less prone to fluctuation, etc. And it doesn’t tell the whole story about how especially effective Ziegler is at preventing inherited runners from scoring.

Most pitching statistics (like ERA) pretend that inherited runners have nothing to do with the relief pitcher who takes over. And most of the rest (like FIP) ignore runners completely. But there is one catch-all statistic that’s just amazingly perfect for evaluating special kinds of relievers: RE24. Because on average more runs are scored when the bases are loaded and no outs than when the bases are empty with no outs, RE24 doesn’t just give credit for three outs in both situations; it credits the pitcher with the change in run expectancy (RE, get it?).

In the last three calendar years, Ziegler has an RE24 of 46.02. That means he’s saved 46 more runs than the average pitcher would if an average pitcher had been placed in exactly the same spots as Ziegler. That’s fifth in the majors in that time frame, after just Koji Uehara, Craig Kimbrel, Greg Holland, and Joaquin Benoit. Ziegler is that good. Ziegler is special, even more special than his current 2.42 ERA would indicate.

And that brings us back to the very first point: there aren’t many guys exactly like Ziegler. If you had two Zieglers, you could cover more DP opportunities in the late innings; one Ziegler won’t be available for all of them. But not twice as many. And three Zieglers? Definitely not three times as many. Like a lefty-on-lefty reliever, having a Ziegler means having a different kind of tool on the tool belt, and most teams don’t have one. Every team could use one.

In our Midseason Plan, we recommended the team not trade Ziegler. That was mostly based on the premise that retooling for 2015 was the way to go, instead of tearing down and rebuilding for 2017 or something like that. But it was also premised on the idea that there’s almost no way the D-backs could get good value for Ziegler:

Ziegler should also not get moved unless the team gets a significant offer commensurate with his greater-than-it-appears value, and we recommend keeping him because such an offer is unlikely. In addition, Ziegler’s contract situation is something of a work of art crafted by the D-backs front office, and given his advanced age and connection to the organization, it’s highly likely that the D-backs will be able to extend Ziegler on a short-term deal after they exercise his extremely reasonable option for the 2016 season, should they wish to do so.

The point about Ziegler’s age shouldn’t be missed when considering trades. This October, Ziegler will turn 35 years old. His $5M salary pays for his age-35 season, and the club’s option for his age-36 season is $5.5M. Assuming his performance stays more or less the same for the next two years, will anyone really give him a three-year deal that would take Ziegler up to his 40th birthday? I don’t think so. It seems fairly likely that the D-backs could renegotiate an extra year at the end of the 2015 season for 2017, and even if they have to pay him $6M or so in salary, that market rate salary would be for a shorter-than-market-rate duration. Signing pitchers a year or two at a time makes getting a good return more likely.

I hope the information above helps convince you that Ziegler has a lot of value. But the point really is: he has more value than other relievers with similar ERAs or FIPs, even though he costs the same amount as those other pitchers. That means that his extra value is all surplus value for the D-backs.

It sounds like the D-backs organization might be on the same page, even if it’s because they’re maybe a bit more confident in a 2015 turnaround than they should be. Last Friday, Ken Rosenthal reported a list of six D-backs players that were “untouchables,” and he included a second sentence in the tweet: “And probably Ziegler.” That’s just fine with me. Apparently, “Ziegler” originally meant “bricklayer.” And if the D-backs are going to make a run for the playoffs anytime soon, Ziegler should be part of the team’s foundation.

9 Responses to Ziegler’s Extremely High Value, and Why He Shouldn’t Be Traded