Brad Ziegler is a unique pitcher. You don’t have to see him throw more than two pitches to understand that. His mechanics, his motion, his repertoire, how his pitches move – all of these fall well outside the norm. As a reliever, he’s particularly unique in that he doesn’t generate a lot of strikeouts in an era where strikeouts have been prioritized in the relief department for the last decade or more. K’s were always desired, but they’ve become more highly sought after in recent memory. For all of the things Ziegler does well, striking out opposing hitters just isn’t one of them.

Not that that’s why he gets paid – he gets paid to get hitters out. Strikeouts are an extra nice ways of doing it because runners on base don’t advance, there’s no chance for a fielding error, etc. But Brad Ziegler does what he’s supposed to, and with the double plays he’s able to generate with the grounders he produces, well, he gets “extra” batters out at rate far above average. Still, strikeouts are valuable and while he’s always been below average in this capacity, things have slipped in 2015 to the point where we have to wonder if there’s a problem that will impact his production.

Take a look at his K% first. It’s fallen hard this year to a mark that was only worse in his inaugural big league season with the A’s. That seems to be a bit problematic even on the surface. Of 138 qualified relievers in 2015, Brad Ziegler has the 6th-lowest strikeout rate. Sure, like I said in the opening, strikeouts aren’t what Brad Zeigler gets paid to produce – he’s not Aroldis Chapman. But, strikeouts are still the best kind of out for a pitcher to obtain in nearly every circumstance. And we know that strikeouts are closely related to results, especially for relievers who work in short stints and occasionally come in to the game with runners on base (Ryan did some fantastic analysis of these ideas very recently and it’s very much worth your time). Because here we’re talking about what actually did happen, let’s take a look at how strikeout rate relates to ERA- (remember, 100 is average, the lower the score the better): 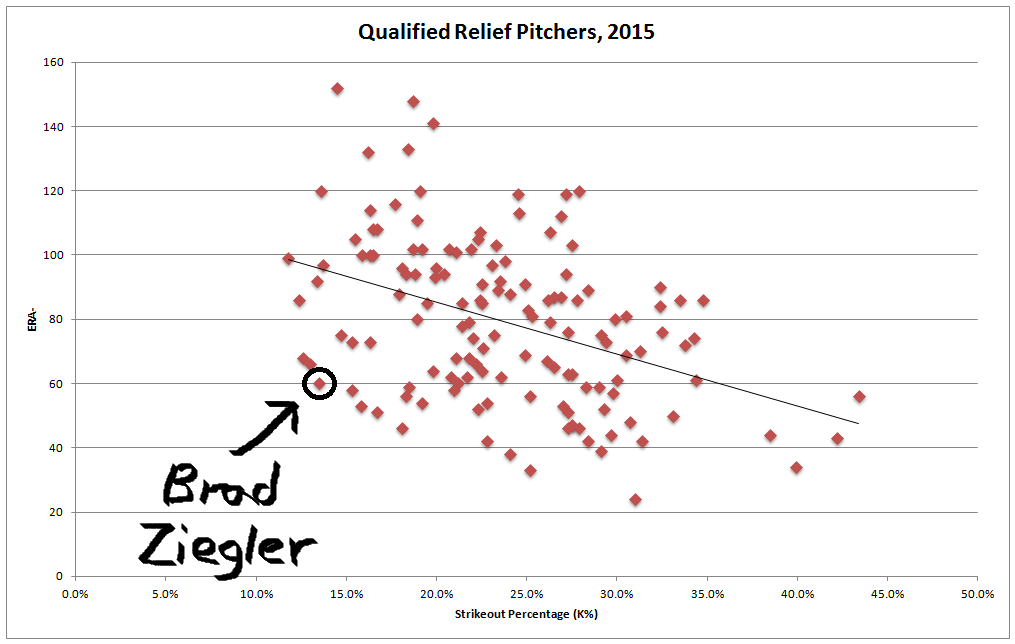 Do you see Brad Ziegler there? I mean, how could you not with that lovely graph defaced so eloquently by my MS Paint skills? Anyway, you’ll notice that he does sport a fantastic ERA- (60), 40% below average. But he’s also on the extreme-low end of the strikeout spectrum. Each pitcher that strikes out fewer hitters has allowed more runs per nine innings than Ziegler and same goes for those have very similar strikeout rates. As strikeout rate goes up, the ERA tends to go down as is evidenced by the trendline. Ziegler is a kind of miracle, an outlier among his peers. We’ve known this since the day he donned the Sedona Red, but with his strikeouts falling farther than ever, and with him being on the verge of turning 36, should we be concerned?

The answer is “yes”, but only to a certain extent. We know that K’s aren’t a huge part of Ziegler’s game, never have been and never will be. The key to his effectiveness is rather well-known: groundballs. But, you see, why have a bit of an issue here, because while his ground balls have gone up, his strikeouts have gone done and vice versa. See what I mean: 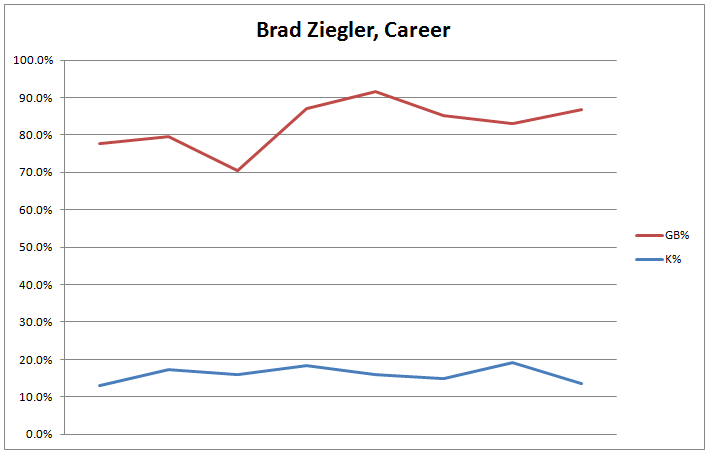 So if there is some kind of inverse relationship between the two, as the graph above would seem to indicate, then it’s not a matter of getting both, it’s a matter of prioritizing the outcome that is deemed most critical. Different situations call for different outcomes surely, but it would appear that ground balls have been the ticket in 2015 more so than any season prior, aside from 2012. And if we’re simply comparing the last two seasons, something has changed dramatically for Brad Ziegler in the last several months: he’s now closing games. Maybe this drop in strikeout rate isn’t about mechanics, velocity or raw pitch selection so much as maybe he’s pitching to the situation, resulting in some different outcomes.

Mechanically, Brad Ziegler is who he’s always been a quirky, funky right-hander who throws from a release point that virtually no one else attempts, let alone makes a big league career out of. A quick glance at his velocity shows that it’s down slightly and has been falling for a few years now. But it hasn’t dropped horrendously, just .6 mph on average when looking at his sinking fastball. That’s not going to help his cause, but it’s unlikely the key to why he’s not striking batters out.

But remember, he became the team’s closer in late May and it should be noted that his repertoire has changed significantly since that time.

You may have noticed that his move to the closers role closely correlates to the drop in usage of his slider. Or his curveball. PITCHf/x calls it a curve, Brooks calls it a slider, we’ll just call it his breaking ball. But you notice that it (red line) begins to fall in mid-May, about when he took the job as the closer, surges in July, then starts to really disappear when he begins using his changeup more. And if we look, historically at what Brad Ziegler’s best swing-and-miss pitch has been throughout his career, it’s clearly his breaking ball. That’s the one righties chase and have no chance against, yet he’s just not using it. It’s not moving as much as it did last year and it is, presumably, most difficult to throw for a strike. The latter reason may be the greater concern and why he’s not throwing the breaking ball with its usual frequency. Either way, it’s not being used and it’s cutting down on the number of strikeouts for Brad Ziegler.

On one hand, the drop in K’s is a little bit scary. Every pitcher, no matter how many ground balls they generate, benefit from strikeouts. And being able to reach back and generate one when you need it is especially helpful. Brad Zeigler is will be 36 next year and the limited velocity he has on his fastball is slipping. But then again, he has very limited experience as a closer and trends in pitch selection and outcomes seem to have changed about the time he took over the 9th inning. He’s been effective regardless, but if this is a trend that holds over and his strikeout rates declines further in 2016, he may start to see a significant change in results, something the Diamondbacks can’t afford.