When Wade Miley was traded, a curious pattern emerged: in just a year’s time, the pitching staff has moved away from being ground ball oriented to being highly fly ball oriented. As things stand, extreme fly ball pitchers Josh Collmenter and Jeremy Hellickson are in line to head the staff, with middle of the road guys Allen Webster and Rubby De La Rosa pitching in and another fly ball guy in Chase Anderson likely in the early lead to become the team’s fifth starter. That’s a far cry from the beginning of 2014, when the team had four ground ball pitchers (Brandon McCarthy, Bronson Arroyo, Wade Miley, Trevor Cahill) holding down most of the rotation.

The 2015 outfield defense is likely to grade a little above average, with A.J. Pollock making up for Mark Trumbo, David Peralta doing just fine in a corner, and Ender Inciarte playing enough to raise the bar in general. So long as Trumbo is in the outfield, however, that crew’s defense can’t be so big a plus as to make a fly ball strategy a particularly good idea. Add to that the fact that unless there’s already some kind of special baseball storage at Chase Field that we’re not aware of, baseballs are significantly lighter and bouncier there; Chase Field balls are often around 20%-25% humidity, as opposed to around 60% in most parks and 50% in Denver.

If we gave the D-backs the benefit of the doubt in this offseason of change, we could say that hey, this all would make sense if they installed a humidor, and if they traded Mark Trumbo and let Ender Inciarte play. If they did those things, it would look like the front office has followed a reasonable Grand Unifying Plan for the entire offseason, instead of randomly making isolated moves that seemed like good opportunities (and many of them were). Short of a humidor and an excellent outfield defense, however, Chase Field is not the ideal place for fly ball pitchers.

If there is a Grand Unifying Plan this offseason, trading Mark Trumbo is likely still in the cards. Trading Addison Reed probably is, though, too.

In 2014, all MLB relievers had a fly ball percentage of 34.2%, and they also had a 9.0% HR/FB ratio. That translates to almost exactly 3% of balls hit in play going over the fence for a home run. Thanks in large part to Brad Ziegler, the D-backs numbers were very similar: a 35.0% fly ball percentage and 9.5% HR/FB. At home, that HR/FB percentage ballooned to 11.9%.

Addison Reed led the D-backs’ class of relievers in fly ball percentage at 47.6%. He also had an unseemly 13.9% HR/FB ratio, which, if it weren’t for the Chase Field Effect, would seem so outlandish as to be purely the product of bad luck. Alas, Reed did throw 32 of his 59.1 innings at Chase, and the results there were disastrous; he managed to avoid fly balls more frequently (44.0% FB%), but his home HR/FB was a ridiculous 16.2%. 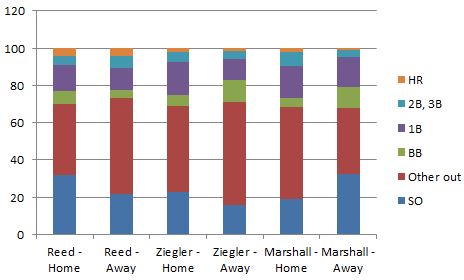 In the above chart, I broke down outcomes — as a percentage of total batters faced — for Reed, home and away. Ziegler and Evan Marshall are also there for a comparison. The difference in home run rate (the orange) may not look enormous, and the truth is, it’s not; this kind of graph doesn’t account for the potential for double plays, but you can see that Brad Ziegler gets his work done without nearly as many strikeouts as Reed. Ziegler was better than Reed last year overall (3.70 FIP for Ziegler, 4.03 FIP for Reed), but not by much; he just did it a different way.

The D-backs pitching staff had a HR/FB rate of 11.1% last year, the fifth-highest in the majors. At home, that slipped upward slightly to 11.9%. Sometimes severe fly ball pitchers can have reliably low HR/FB rates, due to a higher proportion of popouts and other weakly hit fly balls — but this phenomenon is very rare, and really only does come in on the extremes (Matt Cain has been that guy, and maybe Jeremy Hellickson was that guy 3-4 years ago). And Addison Reed isn’t all the way on that extreme; at 47.6% FB% last season, Reed ranked just 13th among 142 qualified relievers. That’s right in the reverse sweet spot; not high enough to tap into the popout phenomenon (1st among the 142 was 59.0% FB%), but plenty high enough that if the D-backs HR/FB holds, Reed could be looking at 5% of his batted balls being home runs.

That’s just not a good fit for the D-backs, given their home park. Very few pitchers in recent D-backs history have outperformed their peripherals, and the ones that have tend to be good contact managers thanks to some deception, like Ziegler and Collmenter and Bronson Arroyo. Reed is not a contact manager, and I can’t find a single pitcher like him who has succeeded with the D-backs in recent years.

Reed was used as a high-leverage reliever all season in 2014, as the closer throughout. In fact, only three of the D-backs’ 35 saves were tallied by someone other than Reed (Collmenter got one in a 4-inning performance in April, Cahill grabbed one in extra innings after Reed had blown a save). On the surface, it looks like Reed was a particularly bad closer. Of the 142 qualified relievers, Reed had the 14th-worst Win Percentage Added, a negative total (-0.97) that tells us that on average, the team’s chances of winning were better before he entered a game than they were after his appearance. He had a 0.0 Wins Above Replacement total, and the only qualified reliever with a fly ball percentage at or above Reed’s who sucked more was the aptly-named J.J. Hoover.

But Reed could improve, and him being bad in 2014 is not the same thing as saying he’s particularly ill-suited for his job. Not every team had a single closer in 2014, however, which makes a cross-cutting analysis pretty much impossible; in every arrangement of the stats I tried, I had to cut so many relievers that the results were based on too small a sample. Cutting anyone at all also means that an analysis would suffer from a survivor bias. What we’d really need to find out if Reed is particularly ill-suited to close is some alternate universe stats from 2014: Reed stats from a role other than closer, and some stats representing other closers of different types with similar-sized innings samples. We don’t have that.

We do have theory. For the sake of argument, let’s say that every appearance was a clean ninth inning to seal a 1-run victory. Reed pitched in 62 games, and gave up at least one run in 23 of them. That would mean 39 saves, and 23 blown saves, although 15 of the blown saves would have been ties. Juan Gutierrez is the only other qualified reliever with a 4.03 FIP. He pitched in 61 games, would have had 44 saves, but of the other 17 games, only 8 would have been ties.

I’ll be honest, theory only appears to get us so far here. On the one hand, a homer-prone closer sounds like a terrible thing; on the other, if we’re picking among pitchers who are the same quality overall, is it really a bad thing if the earned runs they give up come in bunches? No closer can ever be perfect, and if, say, you’re going to give up 20 runs in 60 innings, it might be better to have those 20 runs come in fewer than 20 games. Reed clearly still affects games when he’s not pitching in save situations, but it’s worth noting that last year, he did convert about 85% of save opportunities (32 of 38), and the D-backs actually came back to win 2 of the games in which he blew a save. I don’t want to put too much stock in this last number because closers get to leave mid-inning in the event of walkoffs, but still, it’s pretty impressive that Reed never gave up more than 2 runs in an appearance in 2014.

Reed has a lot of things going for him as a pitcher. His strikeout rate is outstanding, and his walk rate is perfectly fine. The fact that his fly ball rate at Chase was unusually low for him (in any year, not just compared to his rate on the road) could be a symptom of him worrying about giving up the long ball at Chase, and straining to be someone he isn’t may have contributed to his lack of overall success in 2014. No matter how you slice it, a fly ball pitcher like Reed doesn’t really belong with the D-backs. Add that to the fact that his arbitration salaries will soon outstrip his value (either in 2016 or 2017), and the fact that the D-backs are ridiculously deep in bullpen arms, and it seems like the D-backs would do well to send Reed to another team before this offseason is over.