Among Nick Piecoro’s great work within the last week was this piece about the tightening budget and the D-backs’ interest in James Shields. This is the “true baseball team” article that generated a large stir last week, as we talked about on The Pool Shot. This is also the article that alerted us that once again in this zig zag offseason, the D-backs may look to shed payroll. In the piece, GM Dave Stewart notes that hasn’t been told to get under $100M, but that he would like to be under that mark. At that early stage — hours after the team agreed to terms with Yoan Lopez — Stewart indicated that there was no specific plan in place to lower the payroll.

The curious thing? What should be considered “payroll” is a question of semantics, but the D-backs are already under $100M in payroll, if we’re being technical. The difference comes with how we treat signing bonuses.

Back in October in another Piecoro article, Derrick Hall made a point about the amateur signing bonuses:

As for the club’s payroll for next season, Hall said “$90 million is probably a number that makes a lot of sense right now.” He said it’s possible the team could stretch into the $95 million-$100 million range, but one complication is the cost of picking No.1 in next year’s draft.

“It’s not only number one overall but number one in each round,” Hall said. “As that budget has gone up, I’ve got to shave a little off of major league payroll.”

Ok, so clearly signing bonuses affect the budget for payroll, but they aren’t necessarily the same thing. From the D-backs’ perspective, money is money and the category it fits in probably doesn’t matter a whole lot. That makes it hard, though, for us to figure out what the team is saying. Here’s Stewart from that “true baseball team” piece:

The Lopez deal, which is pending a physical, calls for a signing bonus of $8.27 million. Since he was subject to international spending regulations, the Diamondbacks will have to pay a 100 percent tax on the amount they exceeded their bonus pool, essentially making it a $16.27 million expenditure.

Stewart said the signing puts the Diamondbacks’ payroll around $106 million, adding that the club “may have to” make additional moves to shed money.

Here, Stewart is making an unresolved point: the D-backs may or may not need to subtract. That’s the kind of unresolved point that perks up my ears. So let’s dive in, because I can’t help myself.

What is the payroll now?

Three and a half months and a bajillion moves ago, the D-backs projected payroll looked to be $92.9M or so, which included a few extra (and inevitable) major league minimum salaries. Quite a bit has changed — but the payroll really hasn’t. 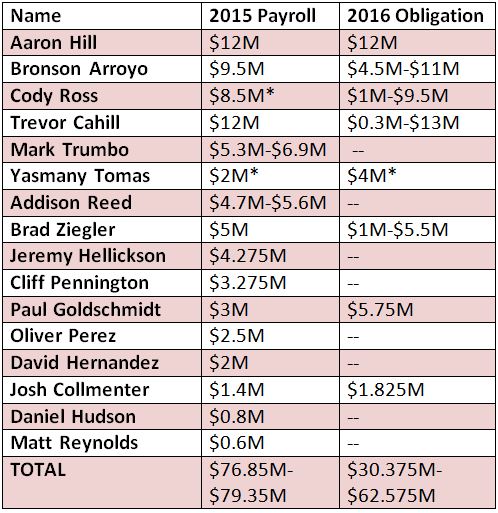 The payroll is actually well over $80M; these figures do not include well over a dozen players who will be making under $550,000 as controlled, non-arbitration players. Patrick Corbin, Randall Delgado, Allen Webster, Rubby De La Rosa, A.J. Pollock, Vidal Nuno, Tuffy Gosewisch, Chris Owings, Jake Lamb, Chase Anderson, Ender Inciarte, David Peralta and Evan Marshall will be in the picture, and several others, some of whom we don’t know the identities of yet. I think fifteen such salaries is a conservative estimate, and twenty would involve a little bit of bad luck with injuries. Call it $10M or so. Depending on how the Addison Reed and Mark Trumbo arbitrations proceed, we’re in the $87M-$90M range.

*But that’s not the whole story. In terms of “payroll,” we’re technically done; but Cody Ross, Yasmany Tomas and Yoan Lopez each have other compensation coming to them this year. I’m not sure how Ross’s $3M signing bonus plays out, but if he’s due a final $1M payment on that this year, that would explain why reports of a $9.5M salary keep cropping up. Yoan Lopez signed for an $8.27M bonus, which is all due right now. Yasmany Tomas signed a professional contract, but reportedly, $14M of his deal is payable as a signing bonus, and I haven’t seen any reports that any of this amount is deferred.

How about the 2015 amateur draft? Final figures for the bonus pools have not yet been determined, but I added up the 2014 bonus allotments for all of the picks the D-backs are in line to get this year, and the total for the first ten rounds is about $11.8M. For reference, last year the D-backs’ signing bonus pool was $7.23M. But if you added the whole $11.8M to our running total, we’re at about $129M-$132M.

Maybe the labels we put on these things don’t really matter. Here’s what changed in the last few weeks: the D-backs’ total expected outlay in payroll-ish costs between this offseason and next offseason went from about $113M-$116M to $129-$132M with the signing of Yoan Lopez and the associated tax. The reality is that not being able to sign any international amateurs over $300k in the next signing period also has an impact, because there’s no way the team will be able to spend over $5M now, as it has permission to do. I’m not sure whether to consider that money saved, because we don’t know whether they would have spent it all anyway. Pressure’s off now, though… they don’t have to figure out how to spend that money.

The next moves in this offseason

The D-backs can subtract in small ways very easily, and maybe that’s in the cards. In hard ways? Well let’s just say that the D-backs were just in this position a month or two ago, and I think it’s safe to presume that if Aaron Hill and/or Trevor Cahill looked easier to move than Miguel Montero, they’d already have new uniforms with their last names stitched on the back. Tasked with trimming the fat from the meat, the D-backs already tried to do that as best they could. It’s not all muscle left — if the team could cancel the Hill or Cahill contracts, I’m sure they would.

Trading what’s left of the fat, though, means packaging it with some muscle. Moving Hill or Cahill means eating money and/or including some kind of meaningful prospect in the deal, and both strategies seem like something the front office is loathe to do.

Like someone buying a car who adds extras because, hey, it doesn’t really make the car more expensive, the team has already made decisions to keep players they don’t technically need. Cliff Pennington is a great piece to have, and he’s signed for a reasonable price. Chris Owings may continue to deal with some shoulder difficulties, Hill could get hurt or moved, and Nick Ahmed doesn’t have the look of a player this team wants to play in 2015. Pennington is a luxury, however, and the fact that he’s signed for such a reasonable price only makes the question louder of whether moving him is a wise idea.

The relief crew could also be cut without really affecting the 2015-2017 product on the field; Brad Ziegler is fantastic and even better than advertised, but despite the uncertainty of coming back from microfracture surgery, he still counts as a luxury. Oliver Perez could get moved easily. David Hernandez had to have been a tough call as a non-tender candidate, because of depth and uncertainty.

If the team looks to move payroll in something other than a pure cost-cutting move, the prime trade candidates become the two remaining D-backs arbitration-eligible players: Addison Reed and Mark Trumbo. Reed looks to be fairly priced for 2015, but there is no chance at all that he can be had back at a 2016 salary that will reflect his real value, let alone 2017; it’s probably better to look at Reed as being on a one-year deal than as being in year one of three arbitration years. Reed is a “proven closer,” and while there are only so many teams now that seem willing to pay for that label, there’s a pretty good chance the D-backs could get something back. Mark Trumbo could command an even better return, although in the “true baseball team” piece by Piecoro, GM Dave Stewart seems to have shot down the idea of moving him.

Barring a trade of Reed or Trumbo, it’s hard to see the D-backs 2015 payroll going down, regardless of how you view the finances. Stewart said he hasn’t been asked to lower the payroll, but seems to be a little uncomfortable with how high it is; that makes it sound like the payroll is exactly where it’s going to stay. Maybe we’ll see the team go after another fairly promising catcher, although I haven’t seen anything saying they’ve been in on Carlos Corporan, who fits the team’s needs fairly well (could partner with Gosewisch; could be better than Gosewisch as the main guy if Oscar Hernandez makes the team). After James Shields, though? We’ve seen this team go after opportunities they think of as good deals, even if it blows up future possibilities (Yoan Lopez), even if it doesn’t quite fit into the plan (Jeremy Hellickson), and even if it’s expensive (Yasmany Tomas). Nonetheless, it seems fairly clear that there’s no vaguely promising way to lower the payroll in a way that the front office seems willing to consider. I wouldn’t count the D-backs out of the Shields race, but if they do, it won’t be a matter of shuffling chairs at the dinner table; it’ll be a matter of adding an addition to the house to make room for a bigger one.

9 Responses to Payroll Puzzle Complicated by Yoan Lopez Signing: Are the D-backs Done?