The D-backs Middle Infield A Love Letter to Jake Lamb

There’s no denying that Aaron Hill is an important piece to the Diamondbacks’ 2015 success. Sure, you could say that to some degree about every player who’ll spend time on the 25-man roster during any season, but Hill is paid to hit and after consecutive season of doing just that, he fell off in a big way in 2014. Like the rest of us, he’s not getting any younger and is entering his age-33 season with two more years under contract looming. He’s owed $24 million over those seasons and, given his age and most recent production, is essentially untradeable at this juncture. The team could use the cash, but they could also use his potential offense. So, they’re hoping, again like the rest of us, that Hill will return to form in 2015 after struggling in a big way.

The first question to ask is why he struggled in the first place. Nick Piecoro of AZ Central spoke with Hill this week to discuss just that and Hill’s remarks were intriguing. Although he suffered from shoulder, ankle and wrist injuries in 2014, he didn’t blame them for his lack of production. Instead, he claims that he pressed at the plate in an attempt to do more. In essence, he’s saying that he tried too hard and got away from what’s made him successful in the past. From Piecoro:

When asked about injuries that might have played a part — there was a sore shoulder, an ankle issue, a wrist problem that General Manager Dave Stewart alluded to last month — Hill downplayed them, as he usually does.

“That’s what happens,” he said. “Some years you have bumps and bruises that you deal with all year, and whether or not that affects the performance … I don’t know. I’m never going to blame anything on that. Other years you go through and you may not have anything. It’s amazing.”

All he knows is, he feels good now. He went back to an off-season workout regimen he employed in the past but, for whatever reason, got away from last year. He added muscle and was surprised to find himself lose five or six pounds, down to 194.

“I feel awesome,” Hill said. “I haven’t felt this good in a long time.”

Clearly, Hill is downplaying the limitations and seems encouraged about his physical state right now, heading into a critical season for his career. Should he falter again, he’ll likely be viewed as someone in deep decline, whereas if he can bounce back, well, he may be regarded as a guy with a few more good seasons in the tank. With Arizona on the hook for a substantial amount of cash over the next two years, I’m sure they’d prefer the latter.

If Hill were pressing and it led to his downturn at the dish, then we’d expect that to show up in the data. One area might be that he was overly aggressive at the plate. Perhaps he got away from taking poor pitches and, in an attempt to do more, swung more often. Digging into the numbers, though, that doesn’t quite appear to be the case. 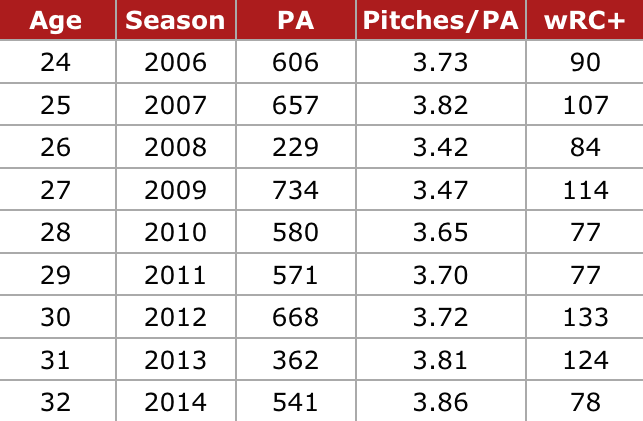 Looking through the bulk of Hill’s career, we can actually see that he saw the most pitches per plate appearance last season. He wasn’t cheating himself at the dish, he was actually taking the highest number of pitches of his career. That certainly wouldn’t imply that he was pressing. But, perhaps as he was taking pitches, he was swinging at one’s that he shouldn’t have. Did his plate discipline erode as he was trying to create the offense that he implied?

Here again we come up empty on the notion of pressing. Hill didn’t expand the strike zone more than in the past. In fact, he cut down his swing rate on pitches outside the strike zone by a full percent (which is more than it might sound) from the previous season. He swung at more pitches in the strike zone than he had during each of the previous three years, too, suggesting that he did a comparatively good job of judging the strike zone. While he made the least amount of contact of his career outside of the zone, his in-zone contact rate remained right in line with what we’ve seen in the past. His overall contact rate has fallen slowly, but steadily, in recent seasons, which is perhaps the most troubling trend. Is the bat slowing? Probably a little, which is to be expected given his position on the age curve.

So if it doesn’t look like Hill was pressing, was his drop due to injury? There are a few places we could look for clues there, such as his power output and the rate at which he hit the ball hard. So let’s peek and see if anything’s revealing.

Sure enough, Hill’s power (isolated slugging) was down at the lowest level of career in 2014. I’d imagine that having any combination of a sore shoulder, wrist or ankle would be troublesome here since both the shoulder and wrist are big parts of a players swing and if the ankle was a problem, it may have effected his weight transfer in the box, ability to load properly or thrown off his balance slightly. Right along with this is the precipitous drop in his rate of hard-hit balls, which was easily at the lowest mark of his career.

There are two explanations here. Either Hill was injured and isn’t letting on, or he’s in a serious decline where he’s lost the ability to inflict carnage on the baseball. Because he’s viewed as a veteran leader, I’m unsurprised he elected not to blame his injuries, but I don’t buy that Aaron Hill is done as a major leaguer. Instead, the injuries likely weighed him down more than he wants to admit, at least publicly. Even though it’s likely that he’s in his decline phase, a drop of this magnitude would be pretty massive and a clear sign that he’s done being the player we’ve seen in the recent past. While expecting a return to peak production in 2015 is overly optimistic, I don’t think he’s as bad as his 2014 campaign would indicate.

If we’re looking for a sign of hope to back this up, let’s glance at his batted ball data. A drastic shift in the rate at which he produced grounders, flies and line drives might tell us that he was a different player at the plate in 2014.

We see that his ground ball rate was indeed low, but it’s not far from his career norms, suggesting that he wasn’t rolling over the ball all the time and hitting weak grounders. Then again, he wasn’t selling out for fly balls either as his fly ball rate was well within his career range. So where’s the difference? Line drives. Hill hit the highest rate of liners of his career in 2014 by a wide margin, and as we know, line drives have the highest rate of turning into hits. But his batting average on balls in play doesn’t reflect this at all. That might be due in part because he wasn’t hitting the ball hard as the HHAV above showed, but we’d certainly expect that it would be higher given his line drive rate.

So perhaps Aaron Hill was unlucky in 2014 to a degree. Perhaps he was drug down by a myriad of injuries. It doesn’t look like he was pressing, but maybe he was in a way that the data doesn’t show. I’m betting on the first two component more than I’m betting on the third, and the good news here is that he appears to be healed up and the laws of regression would suggest that, if he maintains the batted ball profile, he’ll have better results in 2015. I’m not buying Aaron Hill as a 5-win player in 2015, but I’m sure as hell not betting that he’s completely finished as a major leaguer, and if my projection of the data is true, that’s good news for the Diamondbacks. We won’t have to wait long to find out.

*Data via FanGraphs and ESPN TruMedia