Fireballs Shooting Out of Right Hand of Enrique Burgos

There’s no need to overreact to spring training statistics, but Enrique Burgos is forcing us to pay attention — and when March success seems part of a trend that started earlier, we’re really referring to a larger body of work. In a mere 9 innings of work in “official” spring games, Burgos has left a burnt-out trail of major and minor league hitters this spring, recording 12 strikeouts and holding opponents to a strangely-low .133 batting average.

It’s not all roses — Burgos has also given out 6 free passes in those 9 innings, and with a lot of his appearances coming late in games, he hasn’t always faced opposing teams’ starting MLB hitters. Still, these strikeouts aren’t exactly coming out of left field (there might be more coming out of right this year anyway). 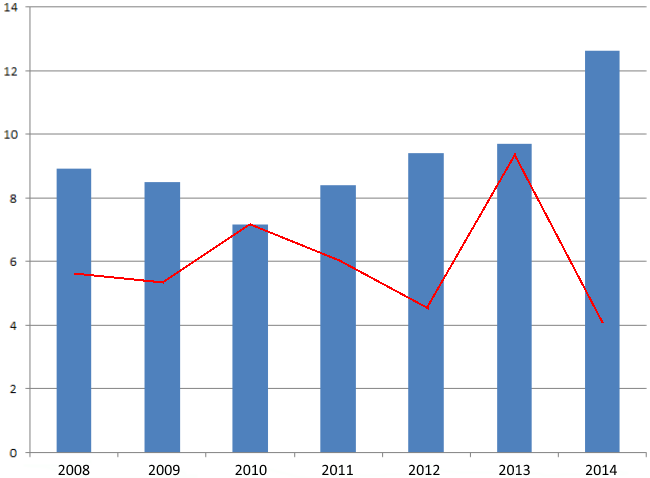 The blue bars are Burgos’s combined strikeouts per 9 innings pitched for each of his years in the minors. It’s pretty apparent that last year marked a pretty big change for Burgos, although his K/9 had been marching steadily upward in the three years prior. This is not a sample size issue, either: Burgos threw 67 innings in the minors last year, thanks to 12.1 additional innings in the Arizona Fall League. This kind of jump doesn’t happen that often.

There’s more to the 2014 story: although his K/9 was 12.63 for the year, it was a remarkable 13.66 in his 54.2 High-A innings. The man faced 227 batters, and while 26 reached with a walk (4.28 BB/9) and two earned first with HBP, just 37 got hits. That’s a ridiculous .186 batting average against, making Burgos more or less the Craig Kimbrel of High-A closers. And note the red line, showing Burgos’s walk rate. The red line is bad for all seven years; anything over 4 BB/9 is bad news. But whereas he somehow had a BB/9 over 9 in 2013 (a walk an inning!), he had a drop in 2014 that corresponded with his huge boost in whiffs. Harder to hit and less than half as likely to miss — something happened.

What was it? As Nick Piecoro reported at the beginning of this month, Burgos made a couple of mechanical changes that came together. Big, if true. The other thing that helped? From the Piecoro piece:

But he also believes his improved mentality led to some success. He credits Stewart with helping him there.

“Before, a lot of people would tell me that I looked so nice on the mound,” Burgos said. “But with the stuff that I have, I can’t be nice. That was one of the things he told me. You have to think you’re the man up there, instead of being so nice.”

And if you didn’t click that link (you should have, and you should), you may be wondering to yourself: “wait, Stewart became the GM in September, I thought we were talking about last season.” I guess you really should click that link, huh?

In the AFL, however, Burgos saw his K/9 drop to just 8.03. A betting man might attribute the drop to an increase in the quality of competition in the AFL, a hand-picked who’s who of prospects where most players have already had a taste of Double- or Triple-A. But consider this: as Jeff noted midway through the AFL “season,” Burgos was still dominant there, for a time, racking up 9 strikeouts in his first 9 innings for the Rafters. The AFL is a tiny sample, with one or two outlandish calls having the potential to throw the numbers completely. Maybe it was fatigue after his longest professional season — especially if the difference between “okay Burgos” and “amazing Burgos” is mechanics. When striking out a single batter in a one-inning appearance brings your K rate down, you’re doing pretty well.

Okay, maybe we can’t pretend like the competition didn’t have something to do with “it” and simultaneously pretend that there is no “it.” But that’s precisely why this spring is so interesting: the competition that Burgos is facing right now is at least as good as what he saw in the AFL. As Jeff wrote in that mid-AFL piece: he’s keeping the momentum moving.

Burgos’s success really stands out in the D-backs’ spring stat sheet, and his 2014 does the same on Burgos’s sheet. But the AFL and spring training give us another dimension we can look at: PITCHf/x. We don’t have it for every game, and with small samples, we wouldn’t be able to look and measure things like “consistency” anyway. It’s time to drool over some tools.

Even if you had no information at all about Burgos other than the stats discussed above, you’d start to paint yourself a mental picture: big time whiffs, low batting average, and high walk rate generally means hard thrower. In terms of max velocity in the AFL, Burgos literally had no equal. The PITCHf/x system measures velocity five feet in front of home plate, and that’s what the mph readings are in this Carson Cistulli piece at FanGraphs, which has his top velocity at 96.9 mph.

Around these parts, we tend to use data from Brooks Baseball when possible, which extrapolates the velocity of the pitch out of the pitcher’s hand. That’s why Brooks has that “96.9 mph” fastball included as a 98.56 mph fastball. And that’s a lot of fun to look at.

Better yet: Burgos has topped that this spring, in a game against the Padres last Saturday:

Poof! That’s what a heater looks like when it’s 99.21 mph out of a pitcher’s hand. Scary. Maybe it doesn’t hurt the intimidation factor that Burgos is not exactly a small man, but I digress. Pair that with a slider coming out of Burgos’s hand at or above 90 mph, and batters have some problems.

I have no idea how long it will be before we see Burgos in a major league uniform during the season; the fact that he’s already on the 40-man helps, but as Joe Paterson can tell you, hanging out on the 40-man doesn’t always mean you get considered when opportunities arise. Burgos already has seven years’ work in the minors, a testament to just how different things can be for players signed as international amateurs. Burgos is still just 24 years old, and apart from the not-that-easy-to-classify AFL, he hasn’t pitched above High-A.

Maybe he still has a ways to go; maybe not. I follow a lot of things in baseball, but I don’t have a feel for what generally happens when a High-A relief prospect breaks through for an entire season in his seventh minor league season, and I have no idea if it will take two more years or two more months. I do generally believe, however, that once pitchers become who they are, it’s not a great strategy to waste those bullets in the minors while hoping he gets better. I do generally believe that pitchers infrequently develop command, unless maybe they just haven’t pitched a whole lot, like a Chris Hatcher or a Braden Shipley. But what does it mean to develop command? Command is all about mechanics, and to hear it from Burgos — and possibly, to hear it from his former agent and now GM (there it is!) — his mechanics coming together is why he had a breakout. After they “clicked,” is there really a chance they will “click tighter”? I don’t have the answers. Burgos is probably going to walk a ton of guys, at any level. The other hitters he faces, though, are going to have a ton of trouble avoiding outs.