It’s been presumed since Chip Hale was named manager: the Diamondbacks will shift more in 2015. Given his tenure in Oakland, it’s no surprise that Hale picked up a thing or two about moving around the infield based on who’s in the box (and hopefully he took notes on creating platoons, too, but more on that later). Not only was the increased frequency of shifts speculated upon, but Hale confirmed as much to MLB.com’s Steve Gilbert this spring. And so the presumption was confirmed; the shifts were just a matter of time.

Then some baseball happened, and that was a good thing. The spring has given us a chance to see whether or not the Diamondbacks were truly going to shift more, and while the exact frequency of shifts remains unknown (for now), there have been some examples of the team optimizing its infield positioning. During a contest between the D-backs and the Cleveland Indians on March 13th, the team had a great chance to test out the defensive shift. True to their word, they did just that. Let’s see how well they moved guys around to accommodate a couple of Cleveland hitters. 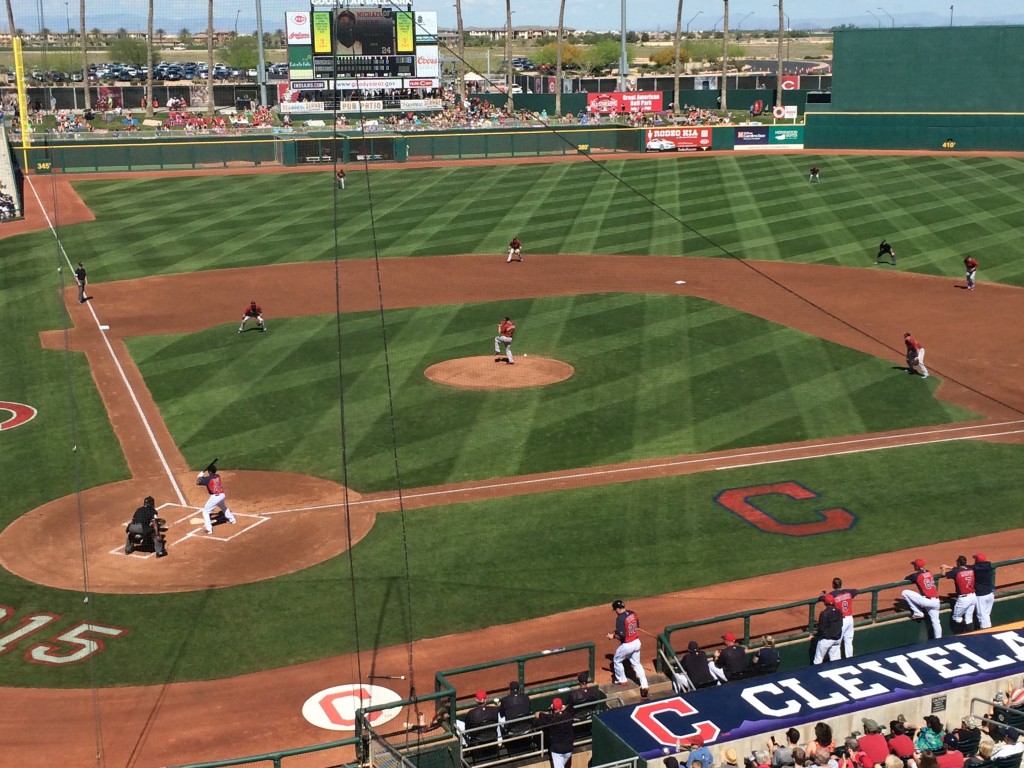 Bourn led off the game and the defense did not necessarily play him straight up. With his speed, both corner infielders were on the grass in case of a bunt. The second baseman, Brandon Drury, played him mostly straight and back while the shortstop, Cliff Pennington shaded the lefty Bourn to pull the ball as he was positioned towards second base. Let’s see how that matches up with where Bourn hit the ball in 2014. 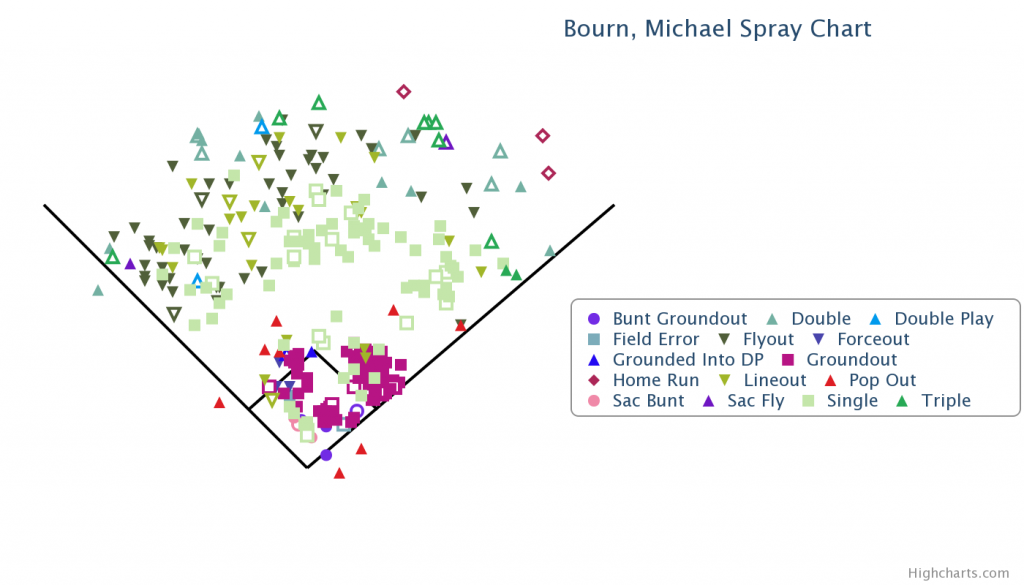 Okay, that makes sense. Bourn did have some pull tendencies in 2014, but they weren’t terribly extreme. The right side of the infield was positioned in near-standard fashion but Pennington moved towards Bourn’s batted ball tendency. Jake Lamb couldn’t have moved much given the threat of the bunt, so his position is logical. So far so good. 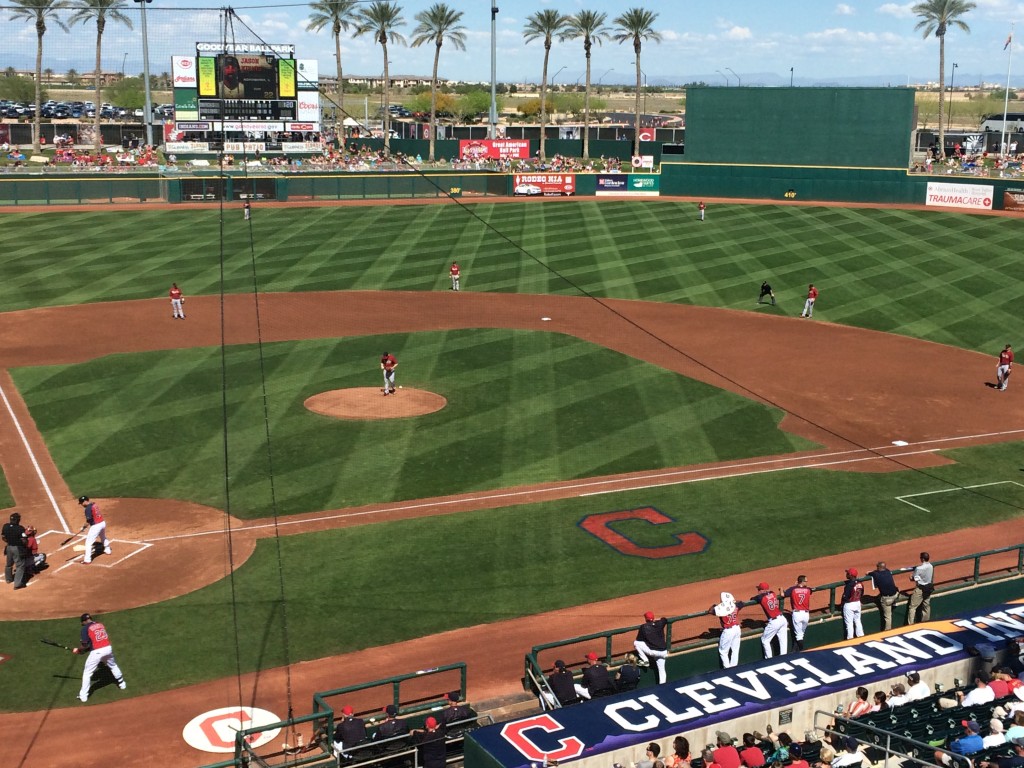 Now we’re seeing some serious movement on the left-handed Kipnis. Starting at third, Jake Lamb has moved back with the threat of the bunt all but gone and he played towards the hole at short, not even worried about guarding the line. Pennington moved towards second base in a big way, positioning himself only a few feet to the left of the bag. Once again, Brandon Drury played Kipnis nearly straight up while Paul Goldschmidt is was back and near the line. How does that register with what Kipnis did last season? Take a look. 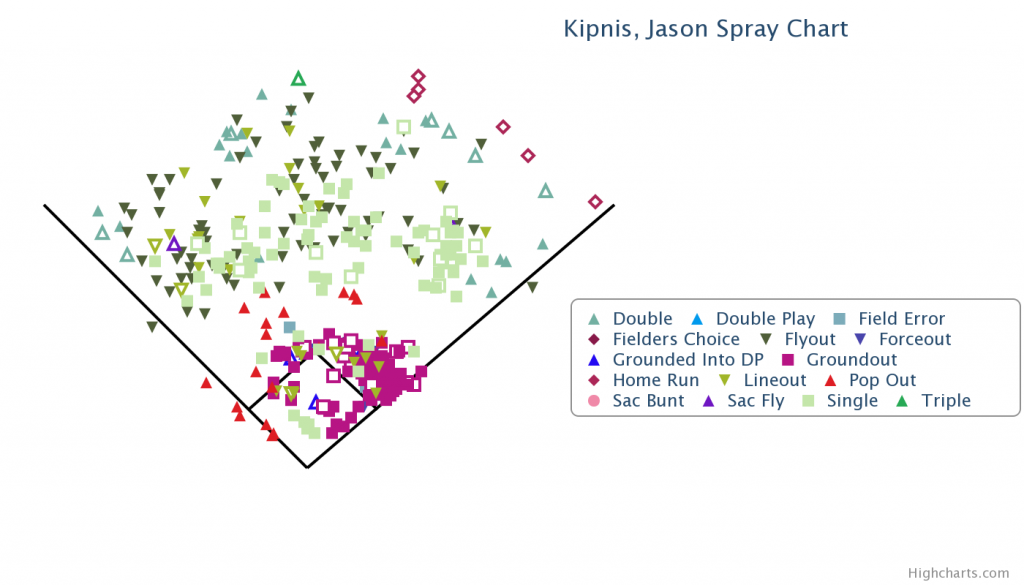 When Kipnis hit ground balls in 2014, he pulled them regularly. Almost nothing went to the left of where Lamb was positioned, meaning Jake really only had to worry about making a move to left when the ball was struck, and he was shaded that way from the start. Similar to what we saw with Bourn at the dish, Pennington moved toward second since that’s where Kipnis places most of his grounders. Drury and Goldschmidt were more or less where they needed to be, although one could argue that Drury could have been shaded a bit more towards the first base bag. Still, very few balls would have moved him to his right and as long as he was prepared to come in or break left, he was more or less fine. Goldy just rocks at everything. This was satisfactory, at least until Kipnis doubled (it was not a good day for Jeremy Hellickson). 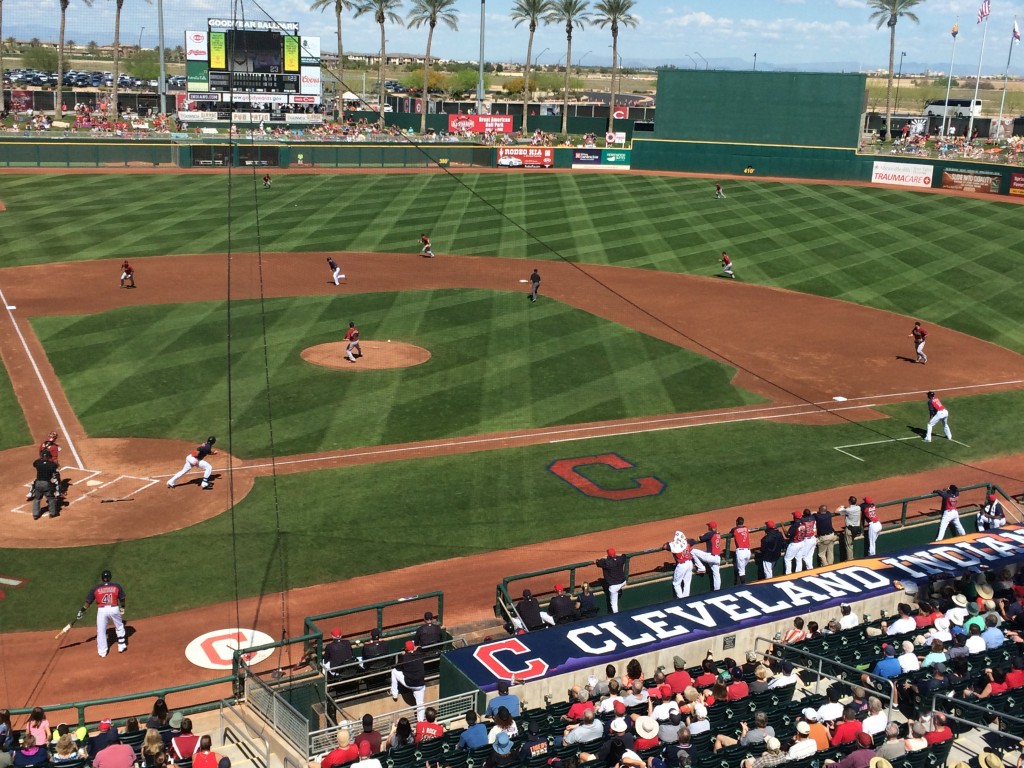 Fire the photographer! Oh wait, that’s me, so let’s give him another chance (he seems okay). Brantley swung at the first pitch of the at bat and caught me by surprise. Kipnis  was on second, which may have thrown off the chance to shift. Lamb would have had to be somewhat near the bag at third in case Kipnis tried to steal and one of the middle infielders would have needed to stay somewhat close to the second base bag to hold him on. Given Brantley’s batted ball distribution, the shortstop holding him on would have made the most sense. Pennington was nearest the bag when the shudder flashed, so that appears kosher. For the record, Brantley in 2014: 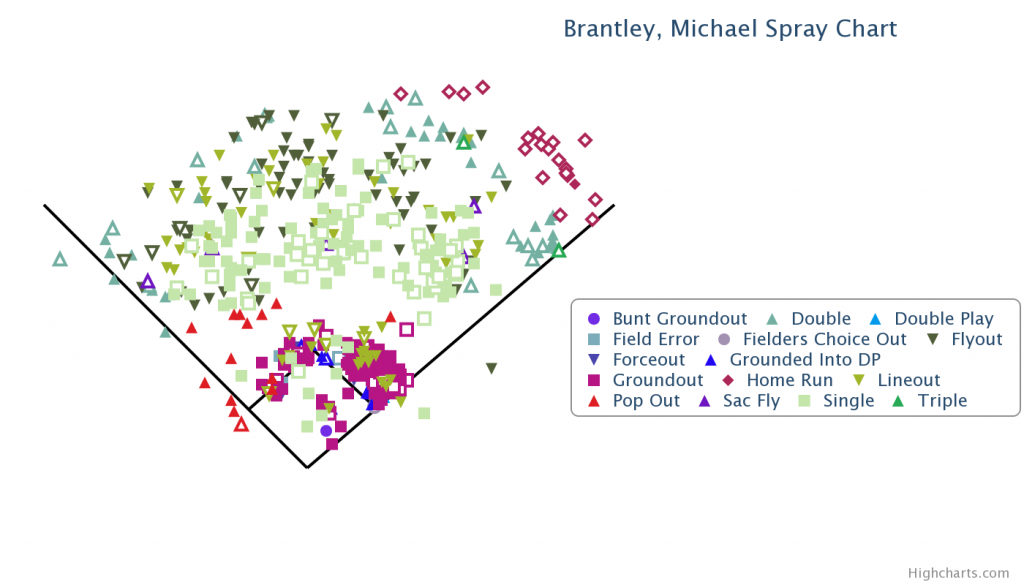 Given the situation, it’s hard to argue. The arrangement appeared to be similar to that which we saw in the previous at-bat with Kipnis since Brantley’s spray chart is similar. Given the quality of the photo (sorry, again) and the runner on second, everything checks out. Brantley shot the ball through the left side and Kipnis scored, but Brantley was thrown out in a run down between first and second. Luckily that kept the bases clear for our final and most exotic example. 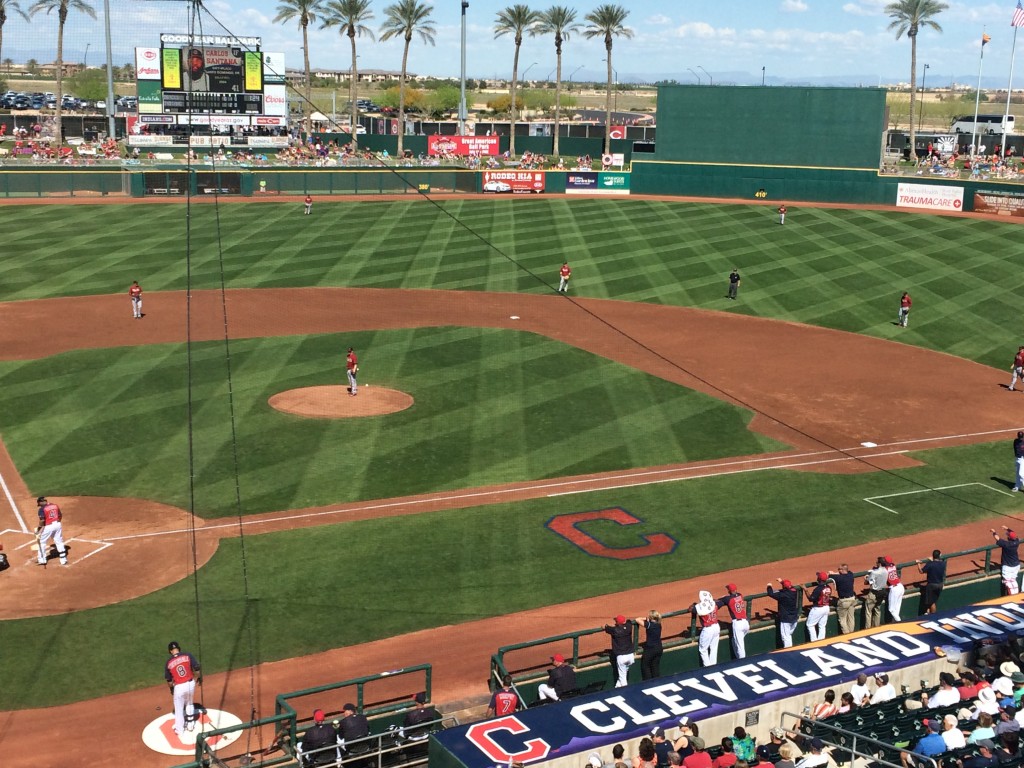 The D-backs really put the moves on Santana, at least in a baseball sense. They had three infielders to the right of the second base bag and even Jake Lamb was nowhere near the line. Pennington, the shortstop, was nearly standing on the base while Drury was deep and a few steps to his left from where he’s been previously. Goldschmidt barely snuck into the picture playing back and right on the line. In case you’re not following, Santana is a pull hitter all the way, especially from the left side. 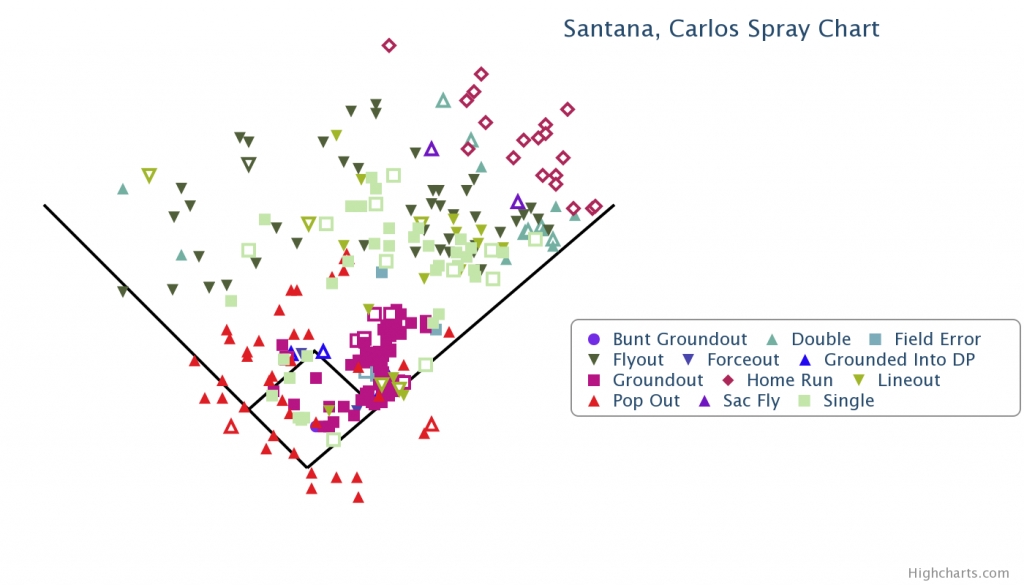 According to his spray chart against righties, like Hellickson, there were three people likely to field the baseball once it was hit: Brandon Drury at second, Paul Goldschmidt at first, or a fan beyond the outfield fence. Santana is a dead-pull hitter and the Diamondbacks adjusted accordingly. It took some serious positioning of the infield to accomplish it, but they did everything they should have. Then again, Santana laced the first pitch he saw from Hellickson up the middle for a single and would later come around to score, but the thought process was solid.

Overall, in at least this small sample, there’s some good signs. They shifted the infield around for each hitter, four that are bound to be everyday players for the Indians, and those shifts correspond extremely well to the data. It wasn’t a surprise that Chip Hale would shift his infield, but it was good confirmation that it was being done well enough. Shifting data isn’t publicly available at this point in time, so we’ll have to resort to the eye test through the 2015 season. It would appear, though, that the Diamondbacks are off to a good start in this department. And since saving runs is a good thing, we should be encouraged, at least for now.