Why Pulling Bradley for Perez Was Just So Wrong

When Archie Bradley was announced as part of the Opening Day rotation, everyone was elated. Here’s a kid who’s been the face of the player development system for the better part of four years in a time when the Diamondbacks’ prospect landscape was somewhat devoid of star power. After all, trading Trevor Bauer, Tyler Skaggs and Adam Eaton can have that effect on a system. His debut was okay as he was hard to hit but he also had a tough time finding the strike zone at times. Luckily, he did most of his missing down and/or off the plate and didn’t miss in the zone en route to six innings of shutout baseball. His second start, made last Thursday, was a test to see if he could remain just as difficult to square up. Once again, he was effective until lifted in the seventh. That’s when things fell apart.

The decision to relieve Archie with two outs and a runner on second base in the seventh needs to be put into context. Bradley had thrown 112 pitches in the outing before, surely more than the organization would like. Most of that was his own doing as he missed the strike zone way too frequently (i.e. four walks). The D-backs were up 4-1 at the time and the Giants, as mentioned, had a runner on second with Brandon Crawford stepping up to the plate. Even if they’d allowed Bradley to face Crawford, there was no way he could lose the game. I hate pitcher decisions as a factor in when to pull or leave a guy on the mound, but it’s part of the larger baseball thinking process, so it’s worth mentioning. The last piece of important information at the time is that Crawford is a left-handed batter (Bradley is a right-handed pitcher) and had been in a slump.

So there we were, with a slumping Crawford at the dish and Bradley sitting at 94 pitches with just one out left to record in the seventh. Chip Hale opted to pull Bradley in favor of Oliver Perez and, well, this is how that whole thing worked out:

Yikes. Crawford went deep and the runner scored along with him and what do you know, we have ourselves a one-run ball game. Now, it’s not hard to imagine the reaction of Diamondbacks fans when this transpired. Comments on twitter ranged from angry to downright irate. Hindsight is 20/20 and most were upset that Bradley was pulled in the first place. I didn’t have a huge problem with that given his pitch count and the way he’d been missing the zone. Walking Crawford would have brought the tying run to the plate and allowing a hit would have done the same while ceding a run. Hale was trying to preserve Bradley’s arm and, presumably, his place in the decision. I don’t love it, but I understand it.

So let’s try to figure out this pitching change. Crawford is a lefty and Perez was brought in to face him. My first thoughts was, “okay, lefty-lefty matchup.” We’ve been trained to assume the platoon advantage any time a pitcher faces a same-handed batter. Typically this is the case, but notice the that I chose the word “typically” and not “always.” As we’ve talked about here many times before, Oliver Perez is not a lefty-killing matchup guy. He’s shown some reverse platoon splits in his career as a reliever, something that’s pretty rare. He’s been inconsistent about it, bit has taken place, as you’ll see below. 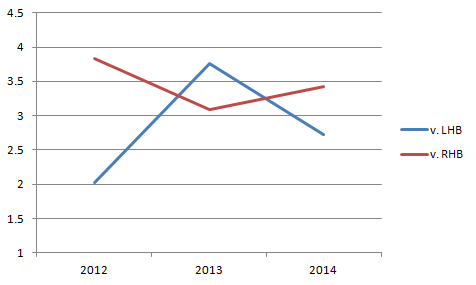 In 2013, Perez was better against righties than lefties, while he maintained the platoon advantage in 2012 and 2014. I limited the sample to his FIP as a reliever, but he’d shown reverse platoon splits at times during his starting career, too, such as his last season as a starter in 2010. When we put it all together and weight the information appropriately, we should probably reach the conclusion that Perez may not necessarily be better against lefties than he is righties, but he may not necessarily be worse either. That is to say, he’s inconsistent and you don’t know what you’re going to get in terms of protecting the platoon advantage. He may get lefties out better or he may get righties out better; we just don’t know because he hasn’t ever established dominance over one type of hitter. As Ryan pointed out a few weeks back, he’s a lefty reliever in name only. 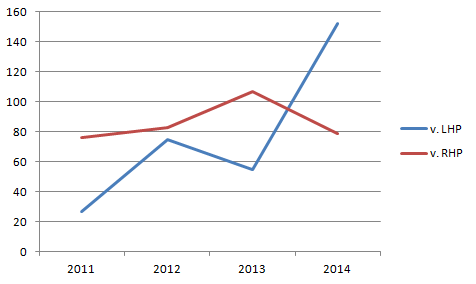 As we see above, Crawford struggled against lefties in the early part of his career as measured by wRC+. But, as of late, he’s turned that around and did it in a big way last season. Now, weird things can happen over a few at-bats, but Crawford logged 564 plate appearances last year, so that’s not necessarily a small sample. And even if we take his previous history of struggles against lefties into consideration, we’re still left with the possibility that Crawford has simply improved against same-handed pitching and has done so very recently. This probably isn’t the guy who just isn’t capable of hitting left-handed pitching anymore and we have plenty of evidence to suggest as much.

So let’s recap: we have a guy at the plate who has mashed lefties as of late despite being a left-handed batter and a guy on the mound who has struggled against lefties at times despite being a left-handed pitcher. There’s plenty of noise in the data for each, but there’s enough data to suggest Crawford is not bad against lefties and that Perez is not particularly good against lefties. That’s not a good matchup with a runner in scoring position in the seventh inning of a game that you should win. Perez threw one pitch (ONE!) and it changed the game immensely. 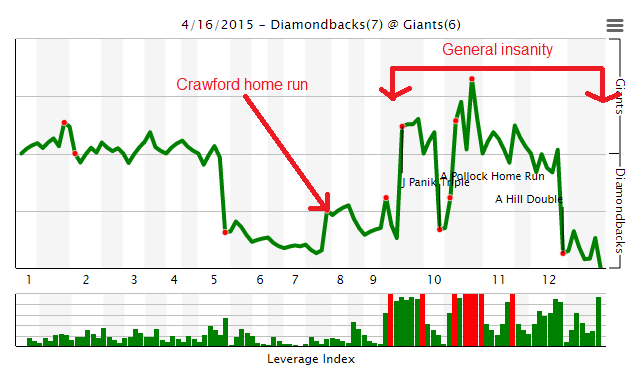 With that home run, the odds of the Giants winning the game rose from 7.7% to 25.3%. I don’t know about you, but it felt greater than that. Brad Ziegler came in immediately and struck out Hector Sanchez looking. Daniel Hudson came on to pitch the eighth (perfectly) and Addison Reed did what Addison Reed does and yeah and I don’t want to talk about it.

But there’s another question to be answered here: if not Oliver Perez to face Brandon Crawford, than who? Let’s run down the options:

With a full bullpen at his disposal, Chip Hale had other options. Oliver Perez has been good in a role as a one-inning guy who can’t get righties and lefties out about equally well. He’s not a match-up guy by any means as he simply has not dominated lefties or righties. Bringing him in just to face the lefty Crawford, with the intent to use Hudson in the eighth, shows us that Hale was using him as a guy who’s job it was to face one batter. That’s just not his game. Andrew Chafin could have done that if they were insistent of utilizing a lefty-lefty strategy (which may not have been the right play in the first place) or Brad Ziegler, who was already warm, could have come in to generate a ground ball. Even Evan Marshall would have been a fine choice given the coupling of his strikeout and ground ball rates. This was not just an example of Perez not executing his pitch, it was the wrong pitcher to use in the first place.

This is a failure of information. Chip Hale should be well aware that Oliver Perez is not death to lefties. He should also be well aware that Brandon Crawford has very recently been very good against lefties. With other arrows in the quiver, there were plenty of options that matched up better than Perez. These kinds of errors should not happen, ever. They’re easily avoidable so long as the information is available. It resulted in the entire bullpen being used, thanks in part to Addison Reed, which could have crippled the team had Josh Collmenter not gone out and thrown nine scoreless the next day, something that you can never count on no matter who takes the mound.

The Diamondbacks were proud to announce Dr. Ed Lewis as the Director of Analytics a few months back, and the team has showed some progress in keeping on-base guys like Ender Inciarte at the top of the lineup, utilizing the platoon advantage in penciling the batters of the day and shifting around the infield. But these more-granular decisions should be in the mix, too, because often the game hinges on a single plate appearance. I understand not wanting to force the manager to thumb through data in the dugout, but he should certainly know who his bast matchups are at all times. It would appear that this was not the case last Thursday and it nearly cost them. The Diamondbacks got lucky this time, but they won’t every time, and they can push the luck in their favor more frequently by paying attention to some of these finer details.