Coming into the season, one situation we were keeping a close eye on was Rubby De La Rosa‘s reliance on fastballs, which seemed to cause a problem for him in Boston, and seemed to make him something of a pre-breakout Dave Stewart. And yet, it’s Archie Bradley who has transformed before our eyes, throwing fastballs 75%, 71%, and 76% of the time in his first three major league starts.

Not that that’s been a problem. Three starts in, Bradley is perched atop a shiny 1.45 ERA. There’s some reason to doubt he can keep this up, as there would be with any human with a 1.45 ERA, but we may be learning that, at the very least, Bradley is capable of pitching well in the majors right now. You don’t need me to tell you that Bradley is walking too many, especially in combination with striking out too few — a good strikeout to walk ratio is about 4:1, and Bradley’s is about 1:1 right now. He’s left 84.2% of runners on base, whereas few pitchers move too far off of a 70% LOB%. And while there is plenty of reason to think that Bradley is inducing weak contact, that .149 BABIP is silly.

Once upon a time, when Bradley made “the leap” from good prospect to top prospect in 2013, the word was: the man has a swing-and-miss curve, a fastball that grades above average, and a changeup that could have a “league average” ceiling (which by itself is pretty good for any pitcher in terms of their third pitch). The changeup was part of the project in the minors, although the breaking pitch underwent some changes as well (more on that in a bit).

Now? Not so much. In the two Arizona Fall League games tracked by PITCHf/x last fall, 13% of Bradley’s pitches were changeups. So far this year, PITCHf/x has tracked four starts (including a spring training game on March 21). He’s thrown his change 2% of the time.

2% of the time. Bradley has thrown a total of six changeups in those four starts. It’s as if Bradley is done with “projects.” He has a fastball that no one can seem to hit, that great breaking ball, and he’s going to run with it. Time to stop preparing to succeed; time to succeed. As great as his fastball has been, it’s Bradley’s breaking ball that appears to be making the difference for him so far in his MLB career. 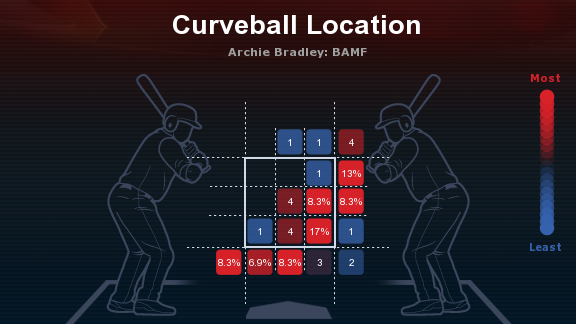 Bradley has hammered away at the edge of the plate on his arm side, as this pitch frequency map from ESPN Stats & Info shows. It’s not necessarily even about going inside (okay, it mostly is), as he throws it there regardless of the handedness of the batter. Against lefties: 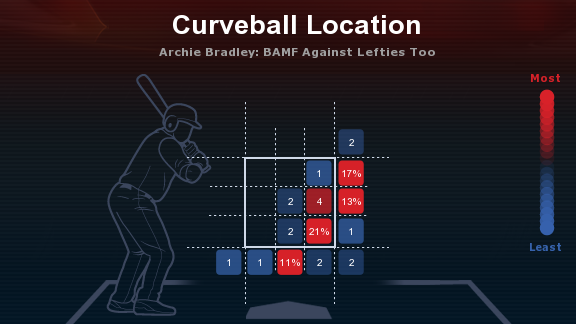 Bradley has already stolen three strike calls off to his arm side of the plate with his curve, so maybe he’s onto something here. Again according to ESPN Stats & Info, the curveball has been put in play 11 times, 10 ground balls and one line drive. All outs. 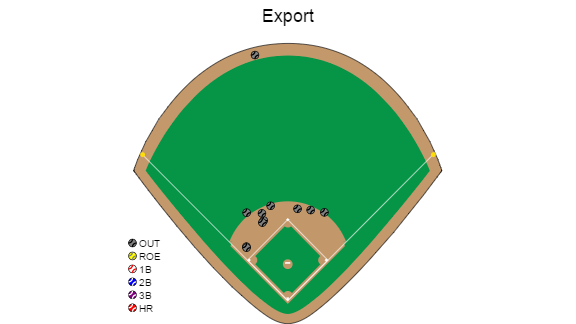 Bradley’s curveball in his three MLB games have — with just five exceptions among the 73 offerings — broken to his glove side, a nice contrast to his fastball. Just as you would have expected, however, the real trick is its depth. Whereas the fastball breaks about 8 inches upward (as opposed to a theoretical pitch with no spin), the curve breaks downward almost as much. It’s like Archie throws mostly fastballs, but every once in a while it’s Opposite Day and the pitch comes in as if the world had turned upside down. That’s a pretty neat trick.

Think of this as from the catcher’s perspective. As compared to a theoretical pitch with no spin, this is how the curve breaks, in inches: 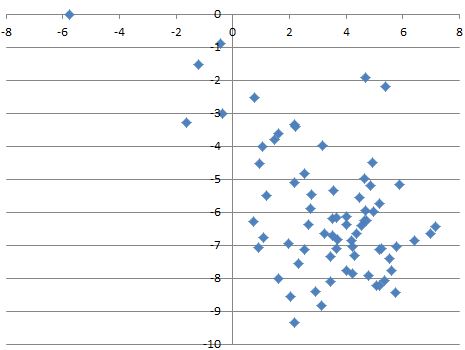 There’s no gravity in that scatter plot, so the curve does sink much lower than this before crossing the plate — but you get the idea. A lot happens, considering that this pitch is still thrown over 80 mph.

In terms of the extent to which the pitch breaks to Bradley’s glove side, what we’re seeing here is a bit more horizontal movement than was picked up by PITCHf/x in the Futures Game in 2013 and in the Arizona Fall League in 2014: 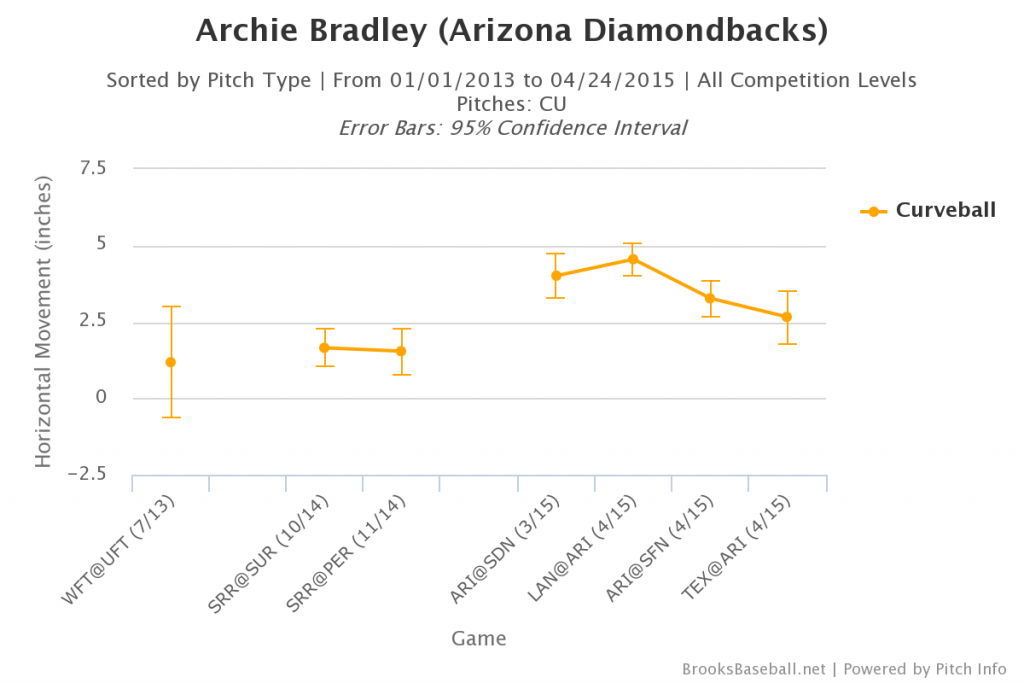 And yet, there is some cause for concern. Back when Bradley made that leap to top prospect status in 2013, his curveball rated very highly — that’s the Futures Game data point. But last year it was reported that he had lost “bite.” Vertical movement is where we’d see that, and we do see that, not just from 2013 to 2014, but continuing into this year. 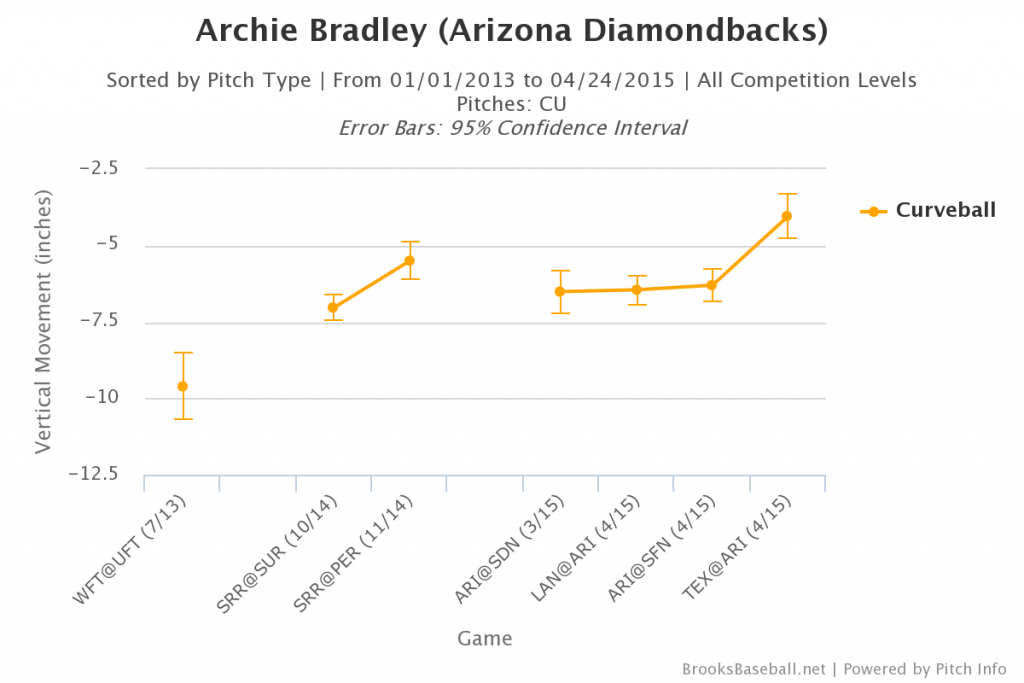 We’ll see if this decreased downward break in Bradley’s last start was just a blip in a longer season, or if it’s something to watch. In the scatter plot above, five of the blue dots/pitches actually broke to Bradley’s arm side (the negative numbers), rather than to his glove side — we should conclude that those didn’t go where Bradley wanted them to go. Four of those five pitches — as well as the two next closest to zero, but on the positive side of that line — were thrown in this most recent start, April 22. Those are throwing off the averages shown on the yellow line on these line graphs from Brooks Baseball; basically, if you hang more of the curves, the average break on your curve will change.

More good news, however. If there’s some truth to this whole “I wore the wrong spikes in the first inning” thing (Steve Gilbert), maybe we can write off these hanging curves, as well. Of those six hangers from his last start, four were thrown in that first inning. We’d expect some, for sure — he threw over a third of his pitches in that inning. But it looks like the cleats affected everything, and maybe we shouldn’t give it too much attention.

What we can pay attention to, moving forward: Bradley’s curveball has had excellent results, and it is an excellent complement to that dominating fastball. This should be fun to watch, hopefully for a long time. Especially if things like this keep happening because of it: