Chris Owing’s Ineffective Swing is Fixable Bend it Like Bradley

With three full rotation turns and about a tenth of a season in the books, the D-backs pitching staff ranks 4th in ground ball percentage. It’s not a ton of time, but batted ball tendencies stabilize quickly — and the thing is, we were expecting the exact opposite. Josh Collmenter and Jeremy Hellickson have been fairly extreme as fly ball pitchers, Chase Anderson has been more of a fly ball guy, and Rubby De La Rosa has been about middle of the road. Sure, there was Trevor Cahill. But then there wasn’t Trevor Cahill.

It’s been a strange, strange season as far as the pitching goes. Up through a week ago, the starting staff was terrible, and the bullpen was great; following the epic game on April 16th, the starters have all been very good and the bullpen can’t buy a vowel. Overall, the staff has the second lowest strikeouts per 9 rate in the majors, at 5.96. Not good. They have the eleventh-ranked staff in terms of walks per 9, at 2.85. Ok, better. The team is dead average with a 3.84 ERA, but ERA-estimators like FIP and SIERA indicate that’s been a little lucky.

It’s really all about this ground ball percentage, which is borderline absurd given that four of the six most featured pitchers (including Randall Delgado) are legitimate Fly Ball Guys, and one of the others has been neutral. The X Factor: Archie Bradley.

On Monday, Jeff Sullivan had a great piece at FanGraphs on Bradley’s four-seam, how it stacks up against others, and how unusual it is that Bradley had been throwing it so low and getting so many ground balls with it. Go read it; I’m not going to reproduce that here. Note, however, that Bradley recorded another eight ground balls last night and his GB% now stands at a cripes-that-can’t-be-sustainable 65.2%.

Most of the change in ground ball rate can be attributed to the starters, who have pitched 90.1 innings of the 136 total (about two thirds):

Based on the 2014 numbers (I used minor-league numbers for Bradley from the excellent mlbfarm.com), we would have expected a GB% of about 41.7% from this group. Three starters below 40% is fairly unusual, and so even with Bradley solidly on the high end of starters, that 41.7% GB% would have had the D-backs ranked 26th. Instead, the starters rank 11th among all rotations in baseball.

Yes, Bradley’s GB% is higher than we would have expected, although his ground ball rate from last night was nearer to his 2014 norm. Rubby De La Rosa’s rate has gone down some, which might have something to do with the pursuit of strikeouts. Collmenter’s has inched upward by a similar amount. But in addition to Bradley (again, refer to that Jeff Sullivan piece for more there), the GB% for Anderson and especially Hellickson have leapt forward. 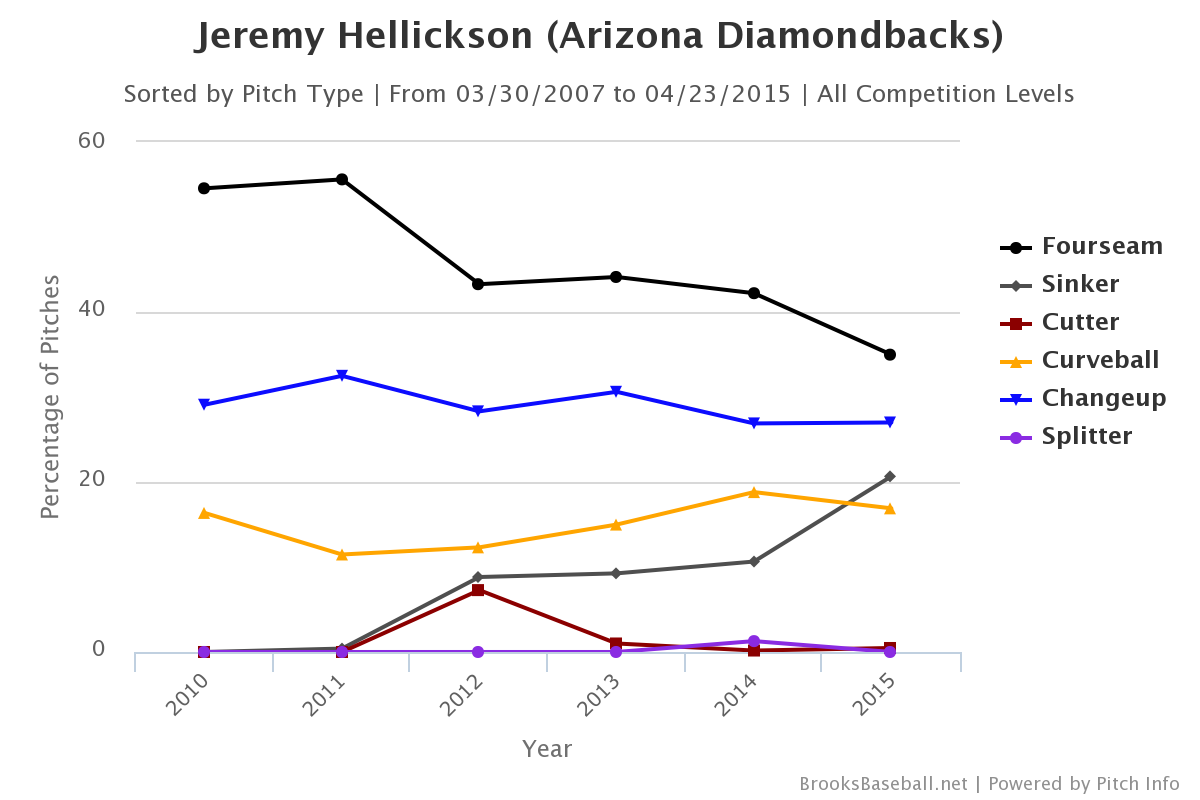 Oh hi there, sinker. Yep, these pitch classifications from Brooks Baseball make it look like Hellickson is trying to fight those fly ball tendencies with the classic ground ball pitch. No four-seams for you, National League. Also, from ESPN Stats & Info: 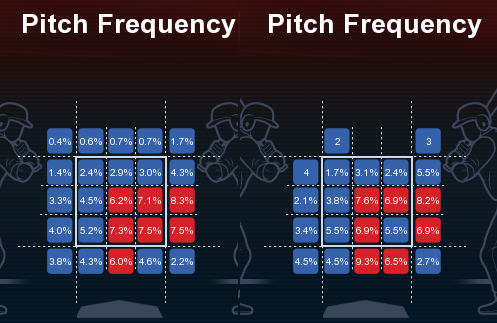 On the left is a pitch frequency map for Hellickson’s MLB work for his career up through 2015 — the 2015 version on the right suggests that Hellickson isn’t working in the bottom of the zone more, but that he’s throwing below the zone more. Hellickson has been a down-and-in guy throughout his career, but pitching a bit more down — combined with the significant increase in sinker usage — does suggest he’s pitching to a particular type of contact at least sometimes.

As for Anderson — we heard toward the beginning of spring training (Nick Piecoro) that he was going to try to keep the ball out of the air by throwing more sinkers, and that was and is a very good idea. But unlike Hellickson — he’s not. Anderson got by throwing the sinker 21.20% of the time last year, but this year, it’s only dipped downward a bit, to 17.63%. But here’s a fun one: it looks like Anderson may be throwing his “with two strikes” changeup in more counts. Regardless of the reason, Anderson’s changeup is leading the way with respect to that uptick in ground ball rate.

It’s still early yet, and this is something to revisit — but a 20 point jump in the ratio of ground balls to balls in play is significant, even after three starts. Before, it was especially fly ball prone; here, it’s been especially ground ball prone. Even the four-seam has seen an increase in ground ball rate, and given how frequently he’s thrown it, that is actually more significant in terms of the final count. What’s odd is — I can’t find any new patterns in his pitch location or in the movement on the pitches. It’s very possible that this is mostly random, but again… something to watch.

Collmenter belongs in the same “TBD” category, although we can say that this is all about his cutter. On Collmenter’s cutter, ground ball rate has stayed steady at 40% or so. But on his secondary pitch, the change — Collmenter has also seen his ground ball rate skyrocket from 45% in 2014 to 65% in 2015. This is the very same phenomenon as with Anderson. I like it. I don’t know what it is, yet. And we can’t know yet if this will actually continue. If this is based on the count, our sample is waaaaay too small to start drawing conclusions.

What we do know, however: Nick Ahmed is at shortstop now, with Aaron Hill mostly moved off of second base in favor of Chris Owings. Putting aside the whole Yasmany-Tomas-as-Third-Baseman thing, the team clearly has prioritized defense up the middle, on the ground. By luck, on purpose, or (more probably) a combination of the two, the D-backs staff is taking advantage of the middle infield’s defensive prowess.

Consider these things, all of which have happened in the last two months:

Anderson saying he would throw more sinkers wasn’t strange; he should throw more sinkers. Put Hellickson’s actual increased usage in the same category. The Delgado thing is weird and wrong, and so while it’s not as surprising, it fits with all of the other bits of “evidence” here, and they all point in one direction: getting more outs through ground balls. Viewing this together as one picture, it sure seems like the team is doing this on purpose.

Bring on the ground balls, friends. With Jake Lamb on the shelf and playing time for Hill available at third, this Ahmed-at-short experiment is likely to last at least a few weeks longer. The D-backs are putting him to work as much as they possibly can; let’s see if they continue to reap the rewards.

6 Responses to Nick Ahmed the Key to a New Ground Ball Pitching Plan?