With Cahill Gone, Rotation Plans Provide for Many Contingencies

The D-backs entered spring training with a dozen rotation candidates: two men with spots essentially locked up, a handful who had already broken into the majors, and an enviable group of longshots who were less likely for different reasons. In the second category were pitchers like Rubby De La Rosa, Allen Webster, Chase Anderson, and perhaps to a lesser extent Vidal Nuno — all of whom had had a taste of the majors and all of whom had at least the chance of showing the team that more time in the minors was unlikely to help them take more steps forward. In the third category were pitchers like Yoan Lopez and Daniel Hudson, who the team needed to get a read on, Archie Bradley and Robbie Ray, who needed to prove themselves ready, and Randall Delgado and Andrew Chafin, who would have needed to prove the team wrong.

Trevor Cahill never felt neatly into any of those categories, and did not fit even messily into the team’s apparent plan of hitting the ground hard in 2015, trying to make as many strides as possible, and contending in either 2016 or 2017, depending on how many of the team’s first options worked out. With Cahill traded along with $6.5M to the Braves (Piecoro), the moving part that couldn’t click is no longer part of the machine. This was an excellent move by the front office, one that would have landed around a 9 or 10 on our -10 to 10 point Offseason Report Card scale for me. It’s not just that he needed to get moved, or that the money seems right and looks good — it’s that the team may have accelerated their timetable even if they thought there was a chance they could eat less money by trading him a little later.

The rotation picture now changes most with respect to Bradley, who dominated in a Wednesday start that also featured an encouraging long relief bid by Ray. One thing I did not consider Wednesday was that Cahill trade talks may have been ongoing. It’s possible that it didn’t seem to make sense because it was never that real. If it looked to a team like the Braves that Bradley was forcing the D-backs’ hand, the Braves might have perceived that as better negotiating leverage, and may have drawn the line at more dollars (or even, a second player) from Arizona, either blowing up the deal or leading to a worse one for the D-backs. If it looked to the Braves like the D-backs had a backup plan they were publicly comfortable with — the Bradley-in-bullpen thing — it might have saved the organization a serious amount of money. I set on that situation because something didn’t make sense. But the cardinal rule when things don’t make sense is that there’s missing information, and this is a great reminder of that. The D-backs’ public consideration of the Bradley-in-bullpen scenario is no longer an example of a broken process — it’s an example of a good process. Thanks to everyone who helped to work through that.

Now, it’s about looking forward. This is maybe the biggest part of the D-backs’ Grand Experiment this year: so many pitchers stand to prove they can adjust to a new team or to the majors. There will be seeing what some pitchers can do returning from injury or bouncing back from failure, and others experimenting with new pitch mixes. Cahill out of the way means more of these things can develop before our eyes. It’s really hard to not get excited about that (but why try?).

If Things All Go Right

We’re in the lab now, designing a new rotation supercar. If the specs the D-backs have chosen first go right, the car could be fast enough to compete in the race in 2016, instead of 2017. Let’s look at what that could look like this year, and then circle back to work through some contingencies. 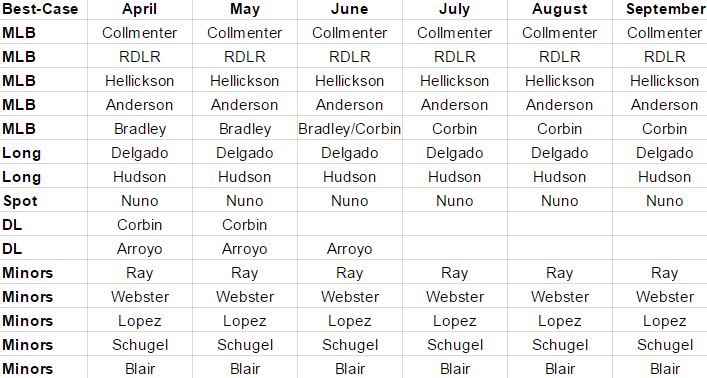 Yes, this is fantasy land. There is virtually no chance that none of these pitchers will get injured this year (we’ll get to that). But if Josh Collmenter is strong, he stays. If Jeremy Hellickson pitches very well (this is the best case scenario), he stays in the rotation, because in this scenario the team will have Big Plans and Big Hopes for 2016. RDLR and Anderson could end up getting bumped in September so others can get opportunities, but there are no glaring innings issues for either. This is the Group of Four.

Even if everything works out as well as possible, Bradley is not going to be in the rotation all year. Thanks in large part to the flexor issue, he ended up throwing just 100.2 innings last year in games. He threw 152 in 2013, so we don’t have to be thinking 120-130 innings, but there’s a good chance the team would look to shut him down around 150 (and there definitely would not be a shortage of other guys to take over.

150 innings does not put Bradley in a position to pass the baton to Patrick Corbin in early June; if he pitches on April 11 and the rotation stays in line the whole way, he’d be starting his 10th game on June 1. Call it 12 by mid-June, and that’s around 70 innings — just halfway there. Maybe they’d have Bradley work out of the bullpen then the rest of the year, or maybe it’d be someone from the Group of Four (except Hellickson), with Bradley instead set to pass his baton to Bronson Arroyo. But the chances that the D-backs will have to navigate that situation are practically nil.

Something will happen. Anyone from the Group of Four (or Bradley) could get injured; if we use the outlook last year as a rough guide, we might say there’s a one-third chance that any particular member of the Group of Four gets hurt this year, and a 40% chance that Bradley does. If we’re trying to guess what those chances are for injury by mid-June, we’d reduce those — but not proportionally (survivor bias). Calling it 20% and one-third for Bradley, that works out to about a 73% chance that one spot will be freed up due to injury.

But there’s another route by which the Corbin decision could be made. Bradley, RDLR and Anderson can still be optioned, and if one of them is struggling seriously, they could be sent down. Combine that with the potential for injury, and the chances that the team will really have to scramble to find Corbin a rotation spot are really low.

Some Possible Changes We Can Anticipate

In addition to the likely chance that Corbin will be added to the rotation sometime around June, there is the likelihood that Bronson Arroyo will be a candidate in late-ish July, or with a meaningful chunk of August left to go. That’s probably going to be difficult, because there are going to be pitchers the team is going to want to look at — and since the team isn’t committed to Arroyo, it’s difficult to see slotting him in being useful in any way other than helping them decide whether to spend an extra $6.5M to exercise his $11M option for 2016 (over the $4.5M buyout).

We can anticipate that Corbin and Arroyo aren’t the only pitchers that the team will want to add at some point this season. If Yoan Lopez starts to knock on the door loudly during the season, their commitment to him as a promising route to a MLB rotation will make those knocks resound all the more (as well it should). If either Robbie Ray or Allen Webster show at some point this season that he’s become all he can become in the minors, they too could be options even if there’s no clear opening. There seems also to be a (smaller) possibility that Aaron Blair could start to put pressure on the organization to promote him by the end of the season, especially if they want to help him surpass his innings total of 154.1 from last year — but that could just be a matter of getting him some time as a reliever once rosters expand and his minor league season is over.

It’s also possible that the team could look to add Daniel Hudson as a starter, regardless of what happens with other pitchers. Contributing about 5 innings a week could get Hudson to 120-130 innings, and so unless the D-backs want to push him higher, there’s no innings-based reason why the long relief plan can’t do that. But it’s possible that the plan won’t work, that the opportunities to pitch in 2-3 inning stints are harder to come by, and that experimenting with 1-inning appearances could leave the team apprehensive about pitching him in consecutive days.

If A Few Things Go Wrong

In terms of the entire season, the chances that all five members of the Opening Day rotation are healthy all season are about 11%. But that 89% chance of injury is “at least one” injury. If we start instead with “occupiers of rotation spots” and using these same starting point numbers, the chances of two injuries are about 70%, three 53%, four 34%, and five 12%. The chances that the specific five to open the season all get injured are just 0.3%, but still, even when considering the injured pitchers’ replacements, a 12% chance of five is higher than I thought it would be.

The chart above was unhinged from reality, but it certainly does bring something real into focus: the team is set up with too many contingencies to enumerate. There are probably about ten pitchers who could be MLB starters, either now or soon, which makes 252 different combinations of five starters. If you said the combinations could be different for three different blocks of the season, that’s over 16 million combinations.

Working those contingencies out as we go this season — and maybe even anticipating them at different junctures — is going to be one of the chief 2015 puzzles for anyone following the D-backs to think about.

What do you think? Here’s a link to a rotation spreadsheet on Google Drive. Take it for a spin, add some new sheets to make predictions, guesses, or work something out. I’ve locked the first one, but copy and paste, do whatever you like on other sheets (even do a different best-case if you want). Sign your name, add your Twitter handle, or do it anonymously. Let us know it’s there (here’s one way) or don’t (you can probably figure that out) — we’ll talk about it, and it’s all context for what happens on the field. The most interesting questions of all, however, have to do with how this season changes the picture for 2016 and beyond, and that’s a big part of what is going to be fascinating about games this season. Play ball!

4 Responses to With Cahill Gone, Rotation Plans Provide for Many Contingencies