The Bat Is Back for Chris Owings

Almost one quarter into the season, fourteen different D-backs position players have tallied at least ten different plate appearances. April offered some surprisingly excellent batting lines from not-(yet?)-superstars Jake Lamb and Ender Inciarte, but also some truly abysmal performances, especially from Tuffy Gosewisch and the D-backs middle infielders. The season stayed volatile when the calendar turned to May, nearly every one of the hitters on the roster either doing well or doing substantially better, or both.

May stats for position players with at least 10 PA in both months:

As you might expect, the players who have batted on more of a part time basis have seen some of the biggest differences; we’re not starting with much of a sample in the first place, so we shouldn’t be shocked to see big drops from Pacheco or Pennington (although on the latter — whoa). The other ten players have arguably played on a near-everyday basis, the lowest PA total among them Nick Ahmed’s 42, and fourth-outfielder-in-name-only-if-he-is-even-named-that-way Ender Inciarte leading the pack at 74. Those totals are still sample sizes that are too small to do much in the way of guessing at true talent level, but they did happen, and they still tell a story. Some of the biggest changes, like with Aaron Hill, are so enormous that they still probably say something (if just that maybe he could be traded after all).

I set out to write about Chris Owings, but this is why we look at the numbers: they sometimes change our mind. I knew Gosewisch was hitting better, but not this much better. In May, Gosewisch has been roughly league average as a hitter — which is above average for a catcher. Every hitter has his hills and valleys over the course of the season, but it may always be that solidly below-average hitters like Tuffy have their valleys look like canyons. It’s not that he’s suddenly a 97 wRC+ guy — it’s that he is who we thought he was, and not a sub-.200 hitter. Between the two months, his K rate decreased a bit from 16.7% to 15.2%, but his walk rate went down a tick too; his line drive rate was high at 27.8%, but was also high in April (23.5%) and he actually hit a greater percentage of softly hit balls in May. He deserves credit for the turnaround, but sometimes, that’s just how the cookie crumbles.

Owings may be the more interesting study. In making an excellent case that Owings and his swing were fixable about a month ago, Jeff pointed out that Owings was swinging at pitches out of the zone at a much, much higher rate than we’d seen in his previous two seasons. We also talked about Owings on The Pool Shot around the same time; I had a wild hair about how Owings got the start over Jake Lamb (through Aaron Hill) in the spectacular 12-inning game on April 16, in part because Owings had looked so lost at the plate that I didn’t see how having him face Madison Bumgarner was going to help him adjust. But Jeff absolutely was right, and I couldn’t have been more wrong: we know now that Owings could sort this out with consistent MLB at bats, because he did.

Immediately, it seems. Owings had two hits in his very next start, and other than a two-game blip on the radar at the beginning of May, he hasn’t stopped hitting. As of the end of that April 16 game, Owings was hitting .100, with fourteen strikeouts in 31 PA. Since then, he’s hit .305 with just twenty strikeouts in 110 PA. What we’ve seen from Owings from April 17 on this season is more or less the best possible version of Owings: not a ton of walks (still just 4 total), the occasional extra base hit, and that kind of batting average. Not bad, right? So let’s see if this is like Tuffy — something that might be fueled by luck — or whether he actually changed his habits or approach in the ways Jeff identified.

First: as of Jeff’s writing, Owings had an O-Swing% of 45.7%. A rate as high as 40% can be workable; 45%, not so much. What had appeared normal for Owings were rates in the high 30s, which makes sense: we know him as a pretty good hitter with batting average his main calling card, and it’s hard to hit the ball well consistently when you’re consistently swinging outside the zone. Jeff pointed out that Owings was seeing a high number of pitches low and away. That’s still true, for better or worse. Here are the pitches he’s seen by zone, presented in the same way Jeff did — the left is from the 16th and earlier, the right from the 17th through yesterday. 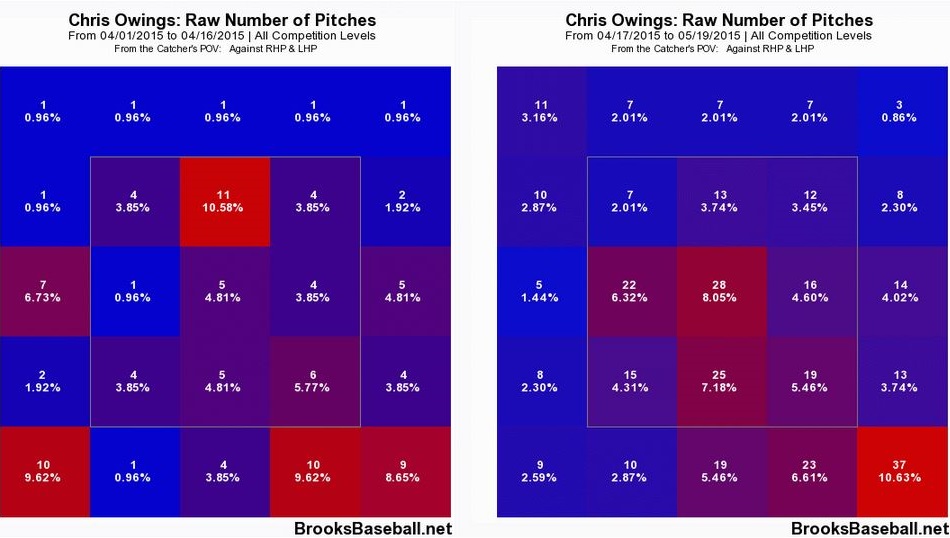 Picturing Owings standing on the left side of your screen looking out, pitchers are still hammering Owings down and away off the plate. In other words, he hasn’t been lucky with the pitches he’s seen lately, which maybe gives us more confidence that Owings has really brought his bat back from the shelf. Owings’s swing rates bear this out — despite the pitches off the zone, he’s been faithfully staying away from those lately: 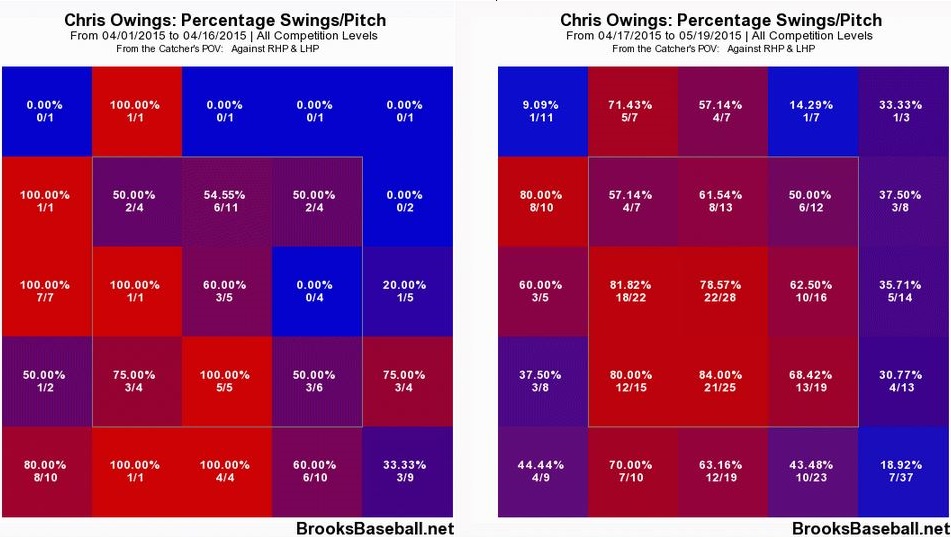 Owings is barely swinging at those low and away pitches now, about one third as frequently as he was early in the season. And he’s been able to lay off pitches off the zone in other areas as well — up and in is a bit of an exception, but it turns out that he’s been able to put those in play for hits fairly frequently anyway. This is all good news. Owings’s O-Swing% hasn’t dropped all the way back down to where we might like — he’s just under 41% in this period from April 17 to May 19 — but it’s not like the zone profiles are saying he still has multiple holes in the zone or the black hole that low and away was to start the season.

Another thing that Jeff pointed out was that as compared to 2014, earlier this season Owings was standing more upright while waiting on the pitch. Like so, from Jeff’s post:

But he also found that Owings was still more bent at the plate when he started his swing, which was extra movement that could easily have been the problem. Basically, Owings was still going to swing from that bent position, and needed to get there. It looks like as part of his turnaround, Owings kind of split the difference; that bending thing at the waist is nowhere near as pronounced, but it’s still there a bit more than it was last year. Whatever works, right? This is Owings hitting his double on Saturday in Philadelphia:

If you were watching that at bat, you may also remember this, which I include for the sake of thoroughness only:

There’s some reason for optimism here. Owings may not be a .300 hitter going forward; the fact that I up and picked a date arbitrarily to serve my purpose did have the effect of inflating that a bit. But we might have been optimistic but fair to expect something like a .280/.310/.400 line from Owings this season, and that is more or less the player we’ve seen since a horrific start.

3 Responses to The Bat Is Back for Chris Owings