Mark Trumbo is Giving Away Too Many Strikes Roundup: Recovering Pitchers; D-backs Went After Daniel Norris; Burgos Up, Way Up; 500 Posts

Josh Collmenter has gone through some unusual role changes in his five years in the big leagues. He’s not your typical pitcher to have been pitched in a relief role and as a starter; it’s not a matter of wipeout stuff that can’t necessarily be maintained in longer bursts, or a question of bouncing back and forth because he was on the bubble as one of the team’s best starting options. He had success in his first big league season, a 154.1 inning effort that saw him start 24 games and relieve in 7 others to the tune of a 3.38 ERA. He was just as effective when moved to a long relief role during the 2012 season, contributing a 92.0 inning season in long relief in 2013 with a 3.13 ERA. But as the D-backs pitching staff crumbled around him at the beginning of 2014, his role as a starter became all the more important.

Collmenter had a rocky first game this year, a 4.2 inning affair with 5 runs (4 earned) that kicked off a string of short starts by D-backs starters. A 5-inning, 3-ER game wasn’t much better, but since then, Collmenter has been at his most excellent. His shutout in San Francisco saved a bullpen that had seen every reliever pitch in the amazing 12-inning game the night before, and after a quality start against Pittsburgh, Collmenter turned in another gem last night.

Technically, Collmenter one of the fastest workers out on the mound for the D-backs; according to the “Pace” statistic at FanGraphs (measured by the space in seconds between pitches tracked by PITCHf/x), he’s in at 20.7 seconds, ahead of Rubby De La Rosa (21.2), Chase Anderson (22.2) and the most meticulous of all pitchers this year, Jeremy Hellickson (26.2). But for all that relative quickness, this year has seen Collmenter slow. down. 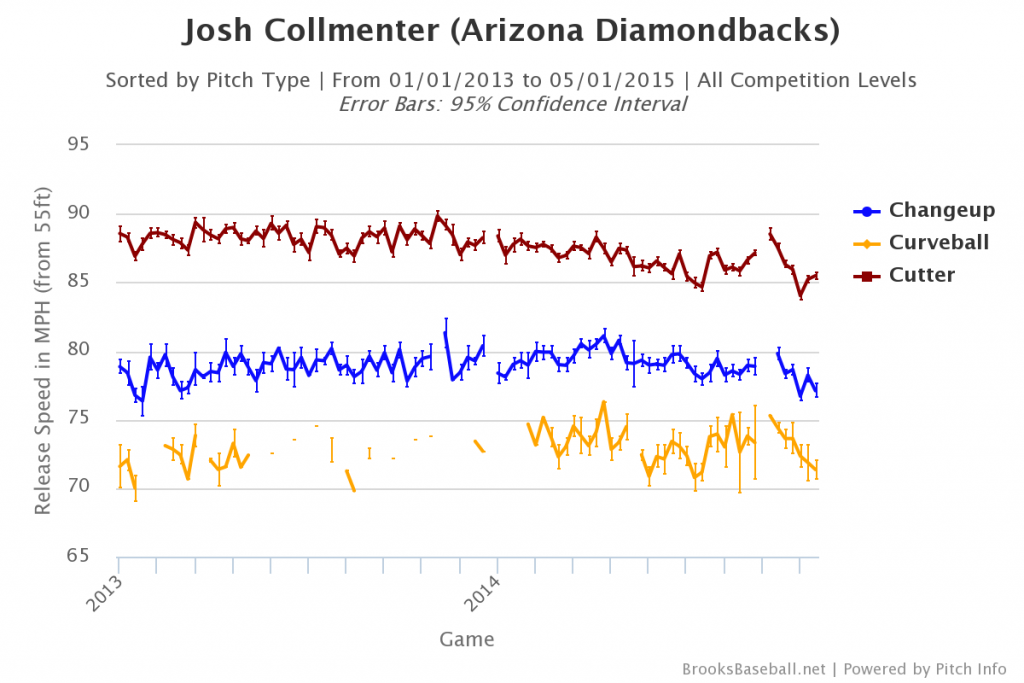 As a reliever in 2013, Collmenter’s cutter hummed along at 88 mph for most games. Remember, this is at Brooks Baseball, and so that’s release speed — what we normally get from PITCHf/x will be a little bit slower than that. So when I tell you that Collmenter’s cutter averaged 84.03 mph for the San Fran Shutout and has been under 86 mph for his last two starts, note that the readings we’d see on TV would be even lower.

We probably shouldn’t put too much emphasis on that shutout — Collmenter had a long game to pitch, he knew he’d be out there for a long time to save the ‘pen, and he had actually warmed up in the bullpen before the extra-inning game the night before had finished. Hanging around 85 mph for most of the last two games, however — that could be a thing.

In Collmenter’s return to the rotation last season, he was asked to essentially double his innings total from each of the previous two years. That’s not nothing, friends. And the velocity graph above bears that out — as 2014 wore on, his cutter velocity wore down. This season, he was fresh in spring training, but immediately sunk back down to velocity levels similar to the end of his 2014. We could be here a while.

About five years ago, Mike Fast did a “Lose a tick, gain a tick” study at The Hardball Times. The premise: what kind of effect does a gain or decrease in velocity have on pitchers’ ability to limit runs scored? After examining how pitchers fared in the majors with some year-to-year changes in velocity, Fast concluded that each mile per hour on a fastball was worth about .24 runs per 9. A pitcher with a 4.00 ERA might see his ERA rise to 4.24 if he lost a mile per hour, 3.76 if he gained one, etc. Toward the end of last season, Jeff Zimmerman found similar results, as he published on FanGraphs.

Applying these principles to Collmenter is tricky. For one, Collmenter’s “fastball” isn’t really a fastball, but a cutter; also potentially important is how “slow” Collmenter was to start with. We’ll get back to those in a moment. Also important, however: as Fast found in his THT piece, lost or gained fastball velocity seems to have a bigger effect on results for relievers (more like .45 runs per 9) than for starters, and Collmenter has been both.

Naturally, I went ahead and ran the data anyway. Using average cutter velocities from Brooks Baseball and ERA and FIP for each of Collmenter’s games from FanGraphs, I found basically no correlation at all between Collmenter’s velocity and his results. The data did lean in that direction, but there was no statistical significance to the findings; FIP had a correlation of -0.088 with cutter velo, and ERA had a correlation of -0.092.

This shouldn’t surprise us too much. As Fast found in his study, drops in velocity affect starters a lot less if they’re already pitching in the 80s. Around 85 mph, 1 mile per hour had an effect on runs per 9 of just over 0.10, nowhere near what it is for pitchers with average or better velocity. Huzzah!

But here’s the fun part: the drop in velocity does affect his pitches, at least as far as movement is concerned. Maybe that’s because it’s a cutter, maybe not. Generally speaking, the lower Collmenter’s velocity, the more horizontal movement he picks up. When I ran those two things together, I got a still-weak-but-not-as-much -0.337 correlation between the two. It’s also something you can kind of see with your own eyes. His horizontal movement for the last two years: 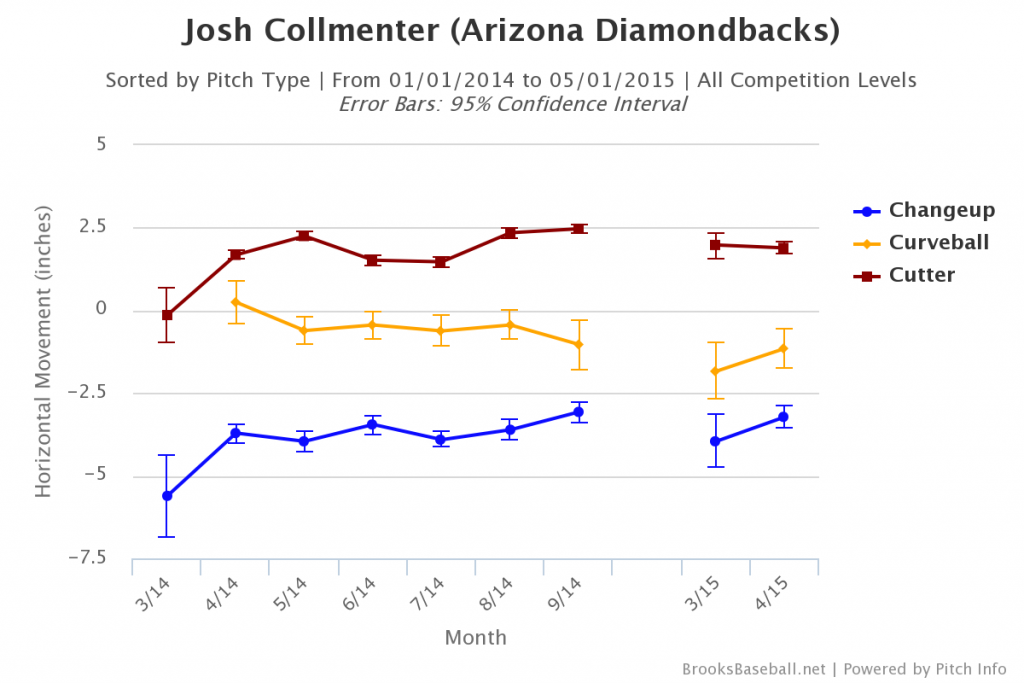 In his first two games this year, Collmenter’s cutter hung out around 1 inch of horizontal movement. Since his drop in velocity for these last three games? 1.29 inches, 3.24 inches, and 2.48 inches last night. That’s not nothing, friends — that can be the difference between a ball hit right at the sweet spot and one that’s going to be an easy catch, even in right field. We’ll stay on top of this. Just know: seeing Collmenter’s cutter light up the radar gun at 83 or 84 during games isn’t necessarily a horrible thing. It might even be a good thing.

4 Responses to The Effect of Josh Collmenter’s Lost Velocity