D-backs’ 2015 Draft: Not Altogether a Success

Through two rounds, no one could really complain with what the Diamondbacks did in the 2015 first-year player draft. Getting Dansby Swanson was a win as it provides the organization with a player who fits the timeline and is tremendously talented. Selecting Alex Young was another savvy move as he was in-demand and looks like a safe bet to make it to the majors as a staring pitcher. Both players fit right into the front half of the Diamondbacks’ Midseason Top 10 Prospect list. From a value standpoint, that’s everything one could hope for.

Yet, the Diamondbacks received some critique for how they handled the draft. Last week, I came across this and it really confirmed something I’d been interested in:

The @Dbacks underspent their @MLBDraft bonus pool by nearly $1.7 mil. Poor use of what should have been a strategic advantage.

Callis is well-respected when it comes to the draft, minor league and amateur baseball. His comments speak volumes as he’s not usually known as an alarmist but rather a good indicator of the industry consensus. If he noticed the missed opportunity by the D-backs, surely it was on most everyone’s radar. Yet, it’s hardly been mentioned.

To understand the criticism, you have to understand how the draft works. Since 2012, each pick within the top ten rounds has a value assigned to it by MLB. The sum of those picks represents a particular team’s bonus pool. Teams can sign players with every pick after the 10th round for a $10,000 with no penalty. If they exceed $10,000, every penny over that amount counts against the team’s bonus pool total. Teams can exceed their bonus pools, but there’s an escalating schedule of penalties associated that essentially keep teams from doing this. The few that have gone over have kept it under the 5% overage threshold to avoid losing their first round pick in the next draft.

Of course, that’s just the procedural part. The existing structure tends tor result in two dominant draft strategies, which we explored prior to the draft. These strategies are built around the idea that the draft provides a rare opportunity. It’s one of the few times a team can add talent to its organization. Because it’s heavily regulated, prices are supressed and teams can add this talent at far-below market rates (ex. Touki Toussaint signed for $2.7M after drafted and was dealt for essentially $10M a year later without changing his future valuation significantly. There were also rumblings that other teams would have been willing to pay significantly more than the Braves did…). When the draft rolls around, teams don’t have to deal with the risks associated with the international market or give up talent to get talent as they do in player trades – they get to simply buy players at a steep discount. Sounds pretty good, right?

Truth be told, it’s a hell of a deal, and in this particular draft, the Diamondbacks were in the driver’s seat. They held the first overall choice, then picked first in the following 39 rounds. They didn’t have any competitive balance picks (but they did get one in the 2016 draft the other day) nor did they receive any for losing players who turned down qualifying offers, but they still were in an enviable position. The main reason being that the first slot in the draft, the number one pick that the Diamondbacks held, was valued at $8.6M in 2015, yet no player was expected to sign for more than $6.5M because, as was noted a million times itself, this draft was particularly weak.

The D-backs took Dansby Swanson first and he signed him for the predicted value of $6.5M, over two million dollars less than the number one pick was allowed for. The surplus from this savings could have been used to pay higher-than-slot values to picks in subsequent rounds. The team wouldn’t have just given the money away because they had it, but they could have presumably taken talented players with high bonus demands and actually had a chance to sign them since they had the biggest surplus of any drafting team. This surplus gave them leverage – more leverage than any other team – to acquire top talent because good players are expensive. They’re generally committed to or playing for marquee college teams and will have future options to get to rich through baseball, but for the right price, can be bought. The D-backs had the most money to use for this purpose and a farm system thin on talent, creating a rare alignment of the stars. Yet they failed to capitalize, instead stating that they’d use the savings from the draft purchase free agents.

We’ll leave that last little nugget of information alone for now, but it’s important to put the potential opportunity into perspective. To do so, let’s look at the three previous drafts under the new bonus slot rule structure. Unfortunately, we don’t have a wide variety of teams to study as the Astros held the first pick in the previous three drafts. They did, however, employ a couple of different strategies at the top with mixed results. Let’s first take a look at how these drafts under this structure have gone in the top 10 rounds, since that’s where the money allowed comes from. 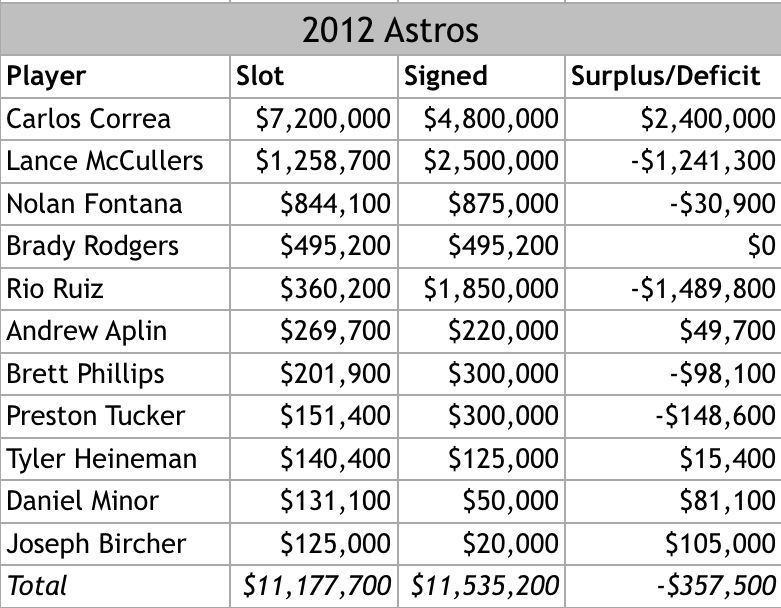 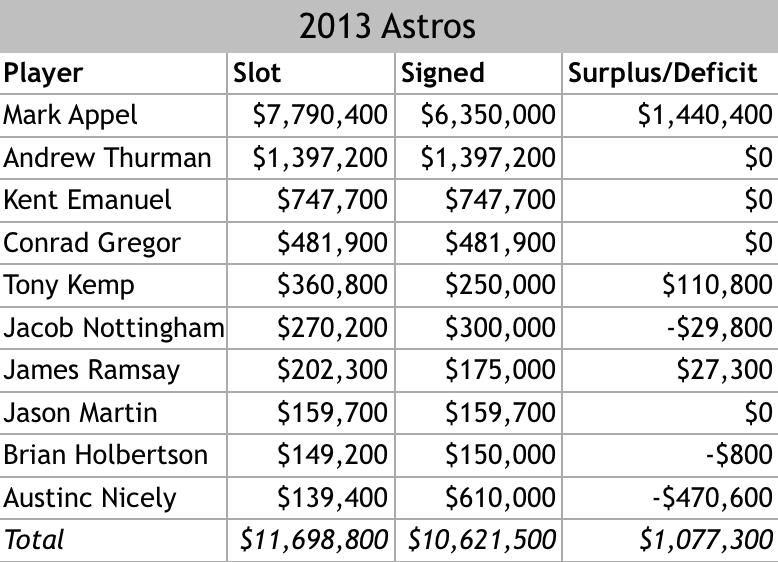 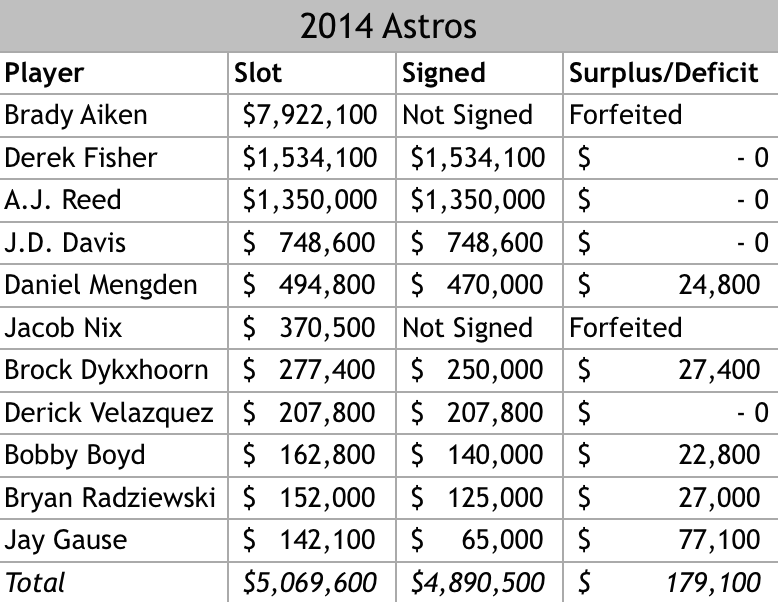 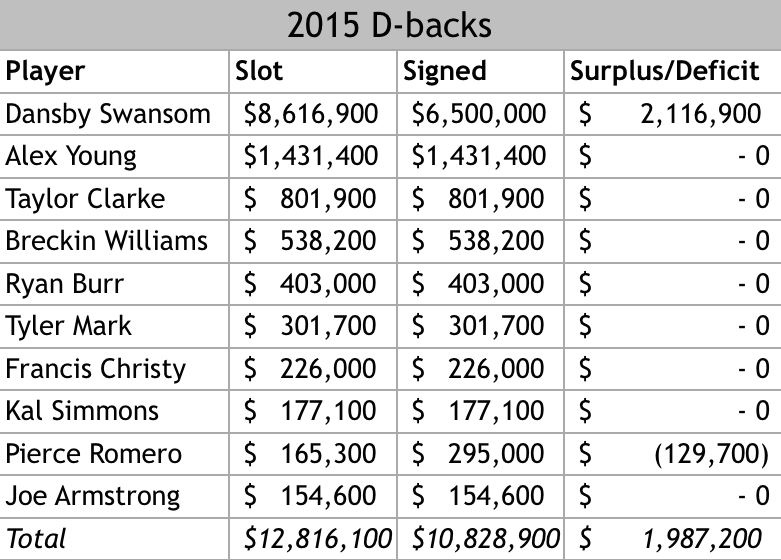 In 2012, the first year of the slot system, the Astros spent little on the first pick in Carlos Correa, opting to save money rather than picking the consensus number one talent – Byron Buxton. That obviously worked out well and they used the saving to ink Lance McCullers, Rio Ruiz and Preston Tucker, all sound decisions that are paying dividends. In 2013, they went a different route and played the draft in a pretty straightforward manner, inking Mark Appel, then using the surplus to get a deal done with Tony Kemp, a prospect who’s on the rise. With the remaining cash, they nabbed Austin Nicely away from a commitment to the University of Virginia. In 2014, some unforeseen issues derailed the Astros’ draft. They approached in a straightforward manner, but the discovery of Brady Aiken’s elbow issues get them from reaching an agreement with him. The money that the team was hoping to save on Aiken was going to be applied to Jacob Nix, but when the Aiken deal fell through due to unusual circumstances, it cost them Nix in the process. C’est la vie, I guess.

But if we look at the aggregate in each draft, we can see that the Astros did a better job of maximizing the money they were given than the Diamondbacks did in 2015. In 2012, the team actually exceeded their pool slightly and payed the tax to ink the guys who are helping them win the AL West right now. In 2013, they came in under budget, then made a run at San Diego prep pitcher Alex Schick who eventually went to the University of California instead. While they didn’t get Schick signed out of the 17th round, they were bold in making the attempt. 2014 isn’t very helpful for us since the team lost the money associated with picks one and five when Brady Aiken’s UCL was discovered to be of sub-optimal size.

The Diamondbacks, meanwhile, came in almost twice as far under budget as the Astros did in 2013, then only went significantly over-slot on 12th round pick Wesley Rodriguez. While Rodriguez was a nice selection and someone that the D-backs absolutely should have rolled the dice on, he only cost them $350,000 of the over $1.9M they had left over. With Rodgriguez in the fold, Arizona still has a boatload of cash left to spend, and no one to spend it on. Instead, the rest of the allotted money – the leveraged advantage the D-backs had – went unused and with allegedly be used for free agent purposes (just like the Touki money). Maybe this Cole Hamels thing has legs, but I’m not sure how likely he’d ever be to waive his no-trade clause for Arizona and it all seems like one big missed opportunity to me.

What should the Diamondbacks have done? It would seem that the should have been bolder in drafting highly-prized players with big bonus demands. They could have literally cornered the market here. The number one pick has such a big slot allotment that Arizona had a very significant advantage on the field. Let’s not confuse this discussion with the spending of money just to spend it. That’s not the point. The idea is that Arizona had a rare, highly-leveraged situation on their hands and they let it pass without coming close to utilizing the opportunity. We’ll never know what discussions took place with advisers, which players were simply off the board from the get-go and what the team’s long-term strategy around talent acquisition is, at least not for a while anyways. The money may or may not get used on free agents. No matter the reasoning, this feels like a missed opportunity regardless, one that will come at a cost to the organization in the form of talent, something that overwhelmingly wins when it takes the field.

19 Responses to D-backs’ 2015 Draft: Not Altogether a Success