Westbrook, Diaz and Others Gaining Momentum in the Minors Roundup: Coming Around on Saltalamacchia; David Peralta Getting Noticed; Goldy Something Else

Things haven’t gone so well for Robbie Ray lately. In his last five starts, Ray sports a 7.03 ERA, backed by an ugly 5.22 FIP. Walks have been Ray’s main issue; he’s averaged three per start over that same stretch, good for a 5.55 BB/9 that would make Allen Webster blush. That 5.55 BB/9 is the exact rate that we saw from Archie Bradley this season — and Bradley is a good benchmark for how difficult it is to compete with a walk rate like that, not entirely surviving despite fairly low hit and home run rates.

Overall, Ray’s half season (91 innings) looks very good, still. His 3.86 ERA might qualify as “good, considering Arizona,” as his 3.43 FIP attests. His 3.16 BB/9 is almost exactly league average, neither a strength nor a weakness, and his 7.81 K/9 is slightly above average. Considering his fly ball tendencies, his home run rate (0.59 HR/9) is so low that we have to start wondering if he’s doing something unusual to earn it.

As our local television broadcasters have pointed out, things started to go awry right after the All-Star break. Not exactly bad (5 walks in those first three starts, 2.70 BB/9), but worse. The main difference, it seems, is that Ray is giving up hits like an average MLB pitcher, instead of limiting them severely as he had in the season’s first half.

Per FIP, Ray was more successful than expected in the first half, but quite a bit less successful than expected in the second. SIERA, a much more nuanced ERA estimator, has Ray actually improving a bit. But you see what’s going on here: Ray has nibbled a bit more, earning a few extra strikeouts (on a batter-by-batter basis), but paying for them by walking more batters. And as a result of something, Ray has seen his batting average against skyrocket from an outstanding (and early Bradley-like) .211 to a mediocre .299 (league average is .250).

These changes correspond with a huge change in batted ball profile.

Holy hell, right? Ray went from being the so-many-fly-balls-it-starts-to-become-helpful pitcher we thought he was to having a ground ball rate like Wade Miley. What the actual hell?

This season, all things bow to the ground ball philosophy we detected very early and later in the season, the one they’ve tried to accomplish by pitching down, the one that resulted in the improbable Zack Godley promotion. It looks like Ray has been fit into that same mold, despite probably being a particularly good example of a guy you wouldn’t want doing that.

See, I happen to have a pretty good baseline here, as in late June, just before things started to get off track for Ray, we dug in very deep to see what was making Ray so successful. Still worth a look, but for our purposes: there was pretty good evidence that Ray’s fly ball tendencies were really helping him, as once you get to a certain level of fly-ball-ness, they tend to become hits less often. And when he digs in, he’s still pretty successful. Splitting based on low, medium and high leverage:

Full disclosure: we’re only talking 4 innings for the high leverage spots, and slightly more medium (45.2) than low (41.1). Still, especially when you focus on the walk rate, this has the look of a pitcher trying to help extend his outings with lesser stuff — one who can succeed when dispensing with the messing around. It’s the look of a knockout reliever, really, and I think it gives us some confidence that the problems Ray has encountered have come during those times when he’s trying to hide his best stuff, get easy outs with his defense, etc. 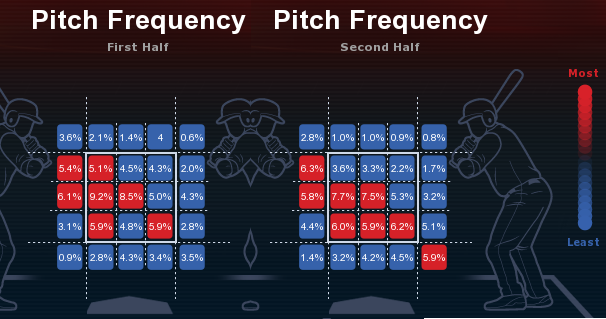 From ESPN Stats & Info, it looks like Ray has indeed been pitching down more. I’d direct your attention in particular to the box middle down, the one where the pitch frequency went up from 4.8% to 5.9%. That doesn’t sound like a big change, but the pitches in the right box total 778; that’s an increase of 8 or 9 pitches. And considering opponents have hit .524 off of Ray in that box… Ray has yielded 49 hits in the second half, and we saw that his batting average against skyrocketed. 11 of those 49 hits have come in that one box, middle down. Considering the average plate appearance goes more than 3 pitches, it’s a little ridiculous that when Ray has thrown a pitch in that spot, it’s turned into a hit 24% of the time.

One thing that stood out when investigating Ray’s success was a new pitch that we hadn’t seen before: a sinker. His usage of it has picked up, according to Brooks Baseball and Pitch Info, which sorts pitch types by hand when necessary: around 18% sinkers, both in July and now in August. 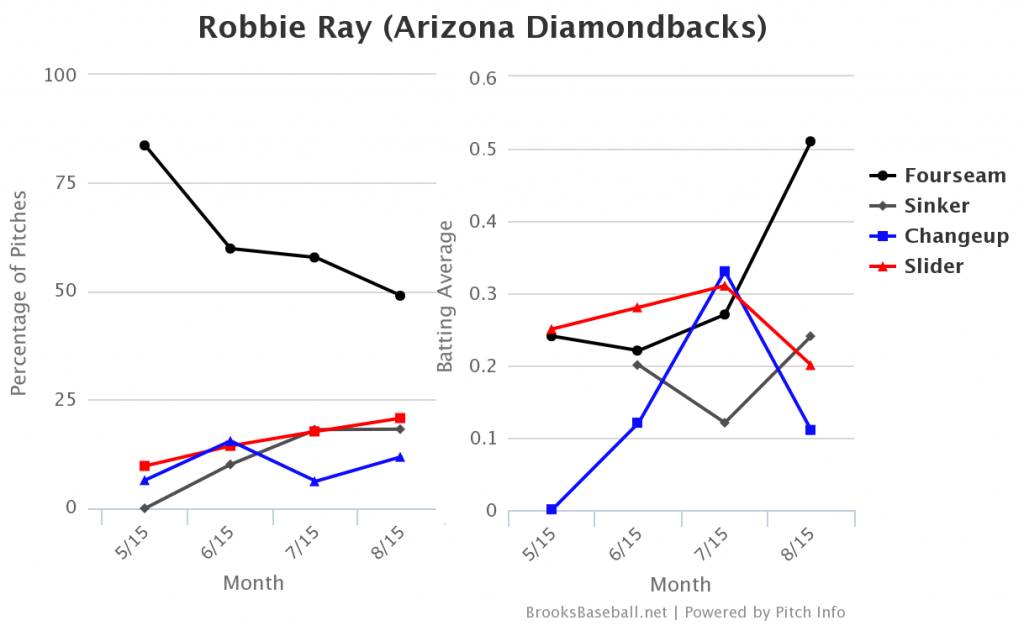 The sinker doesn’t appear to be the problem. Sure, it’s getting hit at a better than .200 clip again this month, but .238 is still below average, if not by a lot. Ray’s changeup had a big blip in July, which is a little weird in that he didn’t throw it very much that month. And I’ll be honest, I was expecting that the breaking ball was the problem — it hangs so much, that if he were asked to throw it down, the hanging version would be as hittable as a particularly grooved batting practice pitch.

No, it’s none of those things. The month of May is not equal to the other months in the graphs above; that was just that one brilliant start in Denver. Ray did throw his four-seam 83.7% of the time in that start, but we should take less from that than the 59.9% usage in June, and from the slow, steady decline in usage after that. Much more meaningful, though, is the giant spike in the black line on the right. Even in August, Ray has has thrown the four-seam about half the time. The batting average against his four-seam over the four months has been: .235, .222, .270, and .514. I don’t think I need any adjectives to make the case that that’s a pretty big deal.

And, what do you know, the two main themes so far are connected. Check out the location on Ray’s four-seam in the first half (left) and second half (right). Also, note that these are from the catcher’s perspective, so this is flipped around from the previous heat maps. 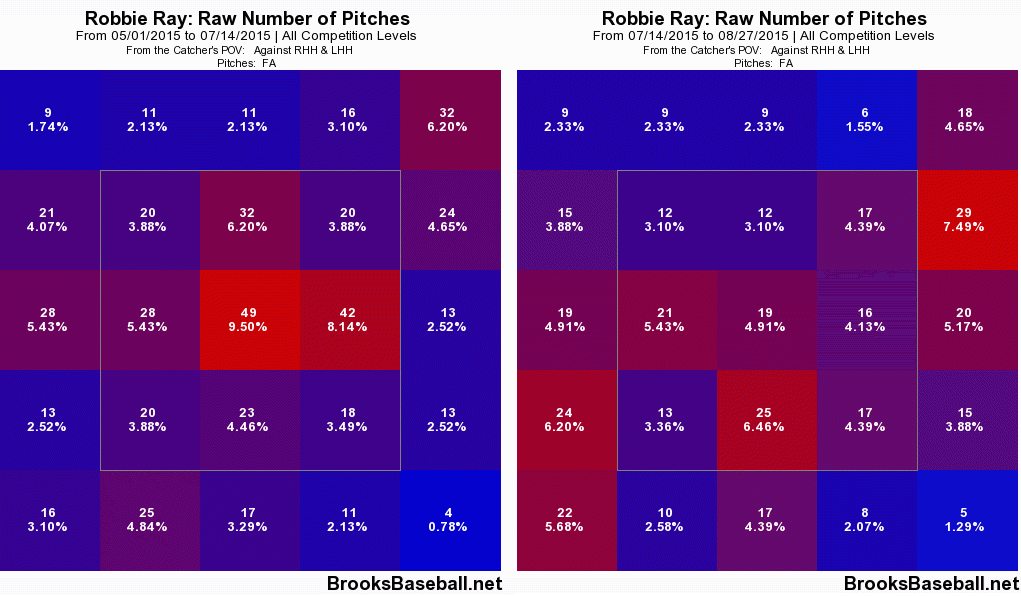 Yeah, not being middle-middle seems like a pretty good idea. But Ray traded quite a few pitches high for pitches low, and in the strike zone, rather than below it. In a vacuum, this actually looks like Ray had better command, with the map on the left looking like a bulls-eye with pitches distributed everywhere. Those increases low in the zone, though — to the sides of the zone, in addition to middle-down — those came with a price. 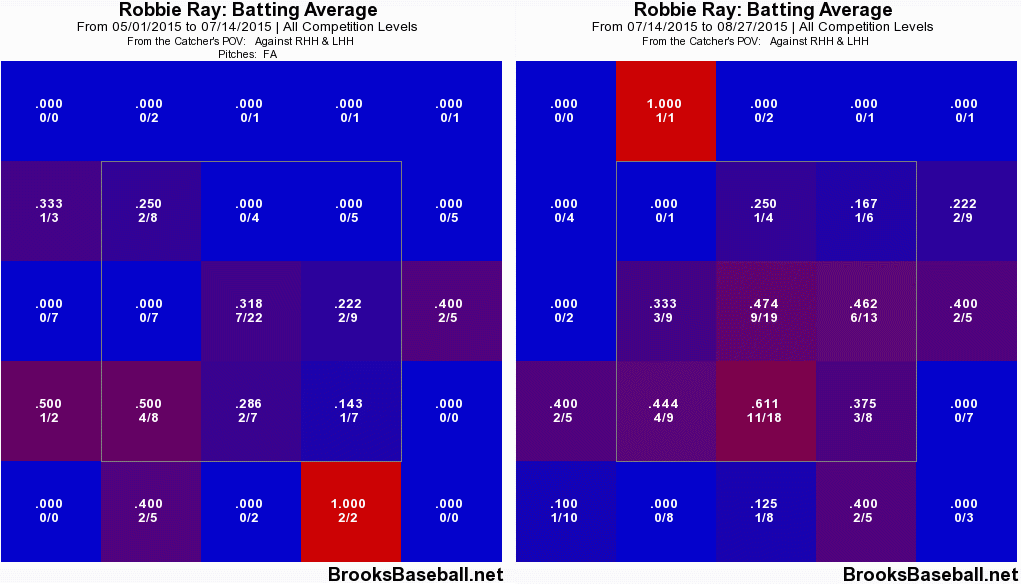 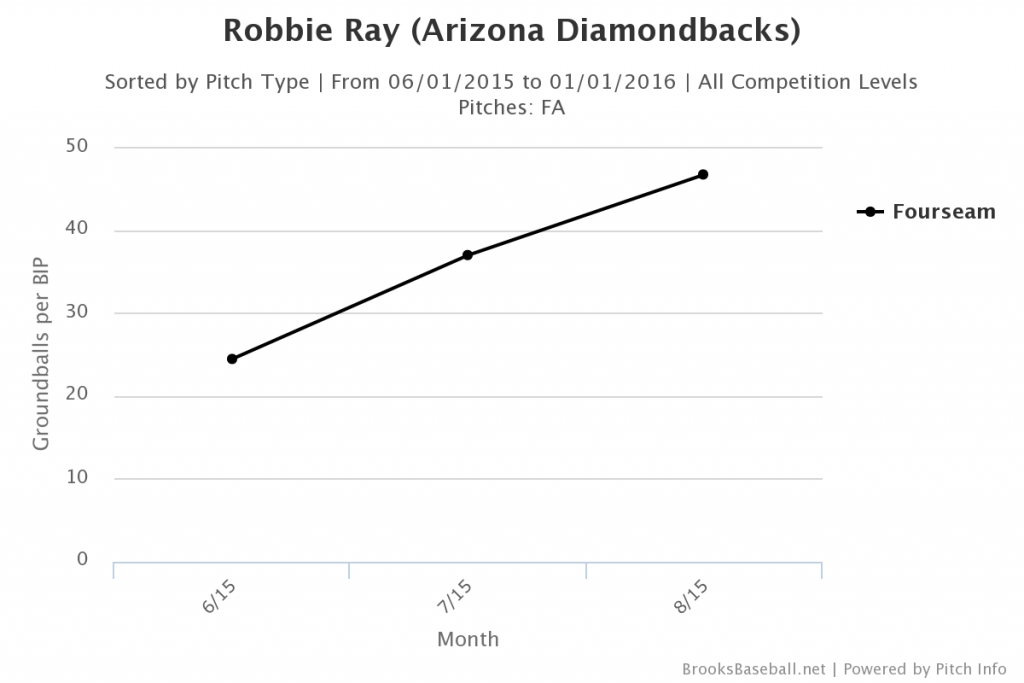 But, yes, his ground ball percentage has become higher on the four-seam. If that were the only goal, the changing location on Ray’s four-seam would be a smashing success. Unfortunately, it’s just been smashed. I pulled the batted ball velocity results on Ray’s fastballs from Baseball Savant, which includes all of his fastballs (sinkers not sorted out). It’s not great for an overall picture, since part of what we’d be looking for is higher or lower incidents of weakly hit grounders or popups, and those seem to not be included in the database. Still, as it turns out, Ray hasn’t been giving up the hardest-hit balls more, but in that middle category of balls that end up hits around 30% of the time, he’s doing much worse:

And, yeah, that hasn’t worked out so hot. Slugging percentage against the four-seam, specifically: 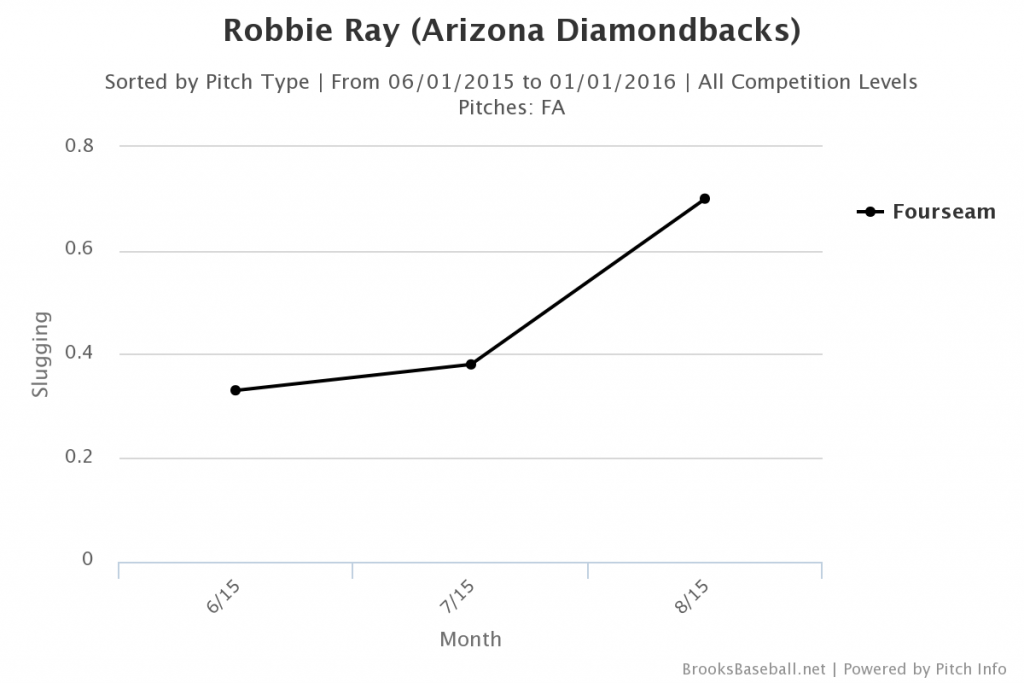 In the first half of the season, 1.36% of Ray’s four-seam fastballs became popups: 8.2% of the ones hit in play. In the second half, zero of his four-seams have been popups. That’s 7 easy outs lost, and again, the second half is bigger, so maybe that’s more like 9.

As Jeff wrote, the staff-wide pitching down experiment has not had very good results, but it’s not like it was a bad idea. Some of the guys who were around league average in terms of ground ball and fly ball rates apparently benefited from the move to ground balls, and that’s an outcome we could have expected. Making a guy with fairly above average fly ball tendencies like Jeremy Hellickson try pitching to ground balls was a little less likely to succeed, it seemed. Taking a well above average fly ball rate guy like Ray and making him fit the staff-wide philosophy, that’s just ill-advised. And unsuccessful. Here’s hoping this experiment comes to an end soon, and the D-backs use Ray’s remaining innings this season to see if returning him to who he is will right the ship.

It’s not like the only thing that has hurt Ray in the second half has been his four-seam location. The breaking ball is still pretty terrible. And I’ll renew my pitch for the team to try a hard slider out with Ray over the offseason or in spring training next year. It’s hard to say that any experiment with a pitcher is definitely a good idea, but this comes really close — because it’s hard to imagine how any pitch could do worse than Ray’s current pitch, which seems both easy to see and easy to hit once you see it.

You saw earlier that Ray’s usage of his breaking ball has actually trended up; in August, he’s gone to it more than one fifth of the time. The results have not been inspiring. Remember, May was just one start. But look at the slugging average against each of his pitches this year, month by month (from Brooks Baseball):

From ESPN Stats & Info, compare the batted ball results on Ray’s breaking ball in the first half: 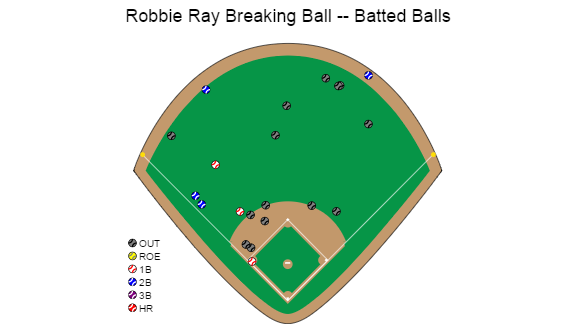 To the results in the second half: 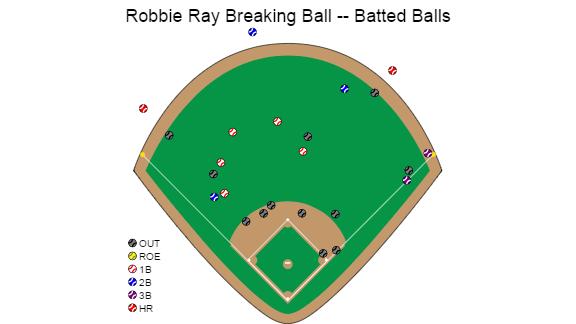 There’s probably some bad luck mixed in here, but it’s not like hitters were having a hard time figuring out his breaking ball at any point this season. For the whole year, hitters had a very high 53.9% swing rate on the pitch, which more than makes up for the sturdy 33.1% whiff rate on it. A problem, but not one that Ray hadn’t been able to survive in the first half, and one much less easy to fix than changing his fastball location back.

9 Responses to D-backs Changing Robbie Ray for the Worse