Pitching Down is Not Working for the D-backs

The Diamondbacks are not a particularly good team when it comes to pitching. By ERA, they rank 26th in the majors. Since we know that Chase Field punishes pitchers more than almost any other park, that’s probably not the best way to look at them. If we choose a defense-independent, park-adjusted metric, they’re basically the same, ranking 24th in FIP-.  Peripherals don’t really make the picture any rosier. Slice it however you want, they’re just not very good. We can talk about Rubby De La Rosa’s good starts or the emergence of a better Jeremy Hellickson of late, but truth be told, these guys just aren’t anything more than back end starters and the D-backs’ rotation is full of them. As a team, the D-backs rank 23rd in K/BB ratio and if we’re looking at this group in comparison to contending teams, it’s easy to see that there’s more than just Chase Field at work here. The overall talent level is just too low for the team to get well over the hump and a half season of a recovering Patrick Corbin isn’t going to fix that.

It’s not like you didn’t know all of this. The team has scored the 4th most runs in baseball this year and is above average in fielding. They just allow a boatload of runners to cross home plate. And if they’re allowing those runs with a reasonably good defense behind them, that’s even more concerning. Yes, we can blame Chase Field to a degree, but that doesn’t help us since the Diamondbacks are not changing venues any time soon. Something is needed to combat both the park effects and the talent level. That “something” appears to be an increased use of sinkers, at least in the team’s eyes, in order to generate more ground balls. There’s a good reason for that since grounders don’t turn into dingers and, with Jake Lamb, Nick Ahmed, Chris Owings and Paul Goldschmidt doing the work, the defenders around the diamond are all good at their jobs. The D-backs have a good infield defensively and they’re trying to put it to use. Good idea.

But there’s something that doesn’t compute here. If the infield is good and the team is trying to get ground balls, why are they still getting punished so badly? Rubby De La Rosa has been throwing more two-seamers of late, yet he’s given up 18(!) home runs in 106 innings pitched (t-3rd in baseball).  Jeremy Hellickson is near a career high in two-seam fastballs and has yielded 13 homers in 90 innings pitched (t-8th in baseball). Chase Anderson has upped his two-seamer usage big time in 2015 and has allowed 10 home runs in 97 innings pitched. You’re getting the idea here – even though these guys are using a two-seamer that sinks and runs, they’re still giving up hard contact. So, my next question was where pitchers were locating their pitches, and not just two seamers, but all pitches.

And that happened to be about the time I stumbled on an interesting nugget of information if there ever was one. Jon Roegele recently produced a fantastic breakdown of the strike zone over at The Hardball Times. As you might remember, the strike zone has largely been blamed for the lack of run-scoring in the post-PED era. Umpires are calling the low strike more than ever and pitchers are taking advantage. Think about it – if you’re a pitcher, throwing down in the zone is low-risk/high-reward since if you miss down you’re unlikely to get burned and if you hit your spot you are likely to get either a called strike or weak contact from the hitter. Those are about as good of odds as one could hope for from the mound. And how do Diamondbacks pitchers rank in terms of throwing at the bottom of the zone (18-21” above the plate)? You might guess they’d be terrible given the outcomes (think: homers) they’ve produced, but lo and behold, that’s absolutely not the case. 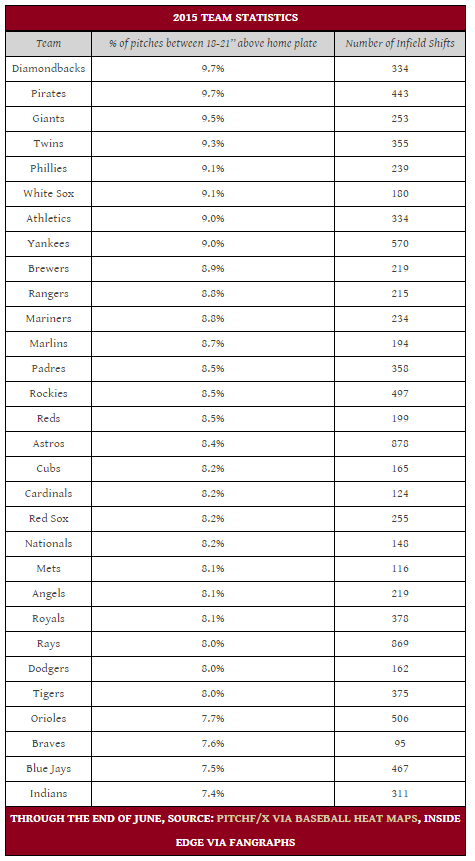 Rather than ranking poorly here, the team is actually FIRST in all of baseball in locating down in this small band of the strike zone. So, one would suspect that they’d have better results to show for it if we believe that assumption that pitching down in the zone is a good thing. Again, something here does not compute. How can they be pitching down more frequently than anyone else and still getting abused? That just doesn’t seem to make sense. We’d expect the opposite, right? Keep it down, get the ground balls, make outs. That’s what we’re used to hearing but the results aren’t bearing that out for Arizona, and as it turns out, for a lot of other teams, too.

If we take the data that Jon produced (and generously agreed to share with us here at Inside the ‘Zona) and match it up with FIP-, a defense-independent, park adjusted pitching metric, we see something interesting. The teams that have pitched down consistently have had the worst results. The teams that have pitched down the least have had better results. But the teams in the middle of the pack when it comes to hitting this narrow band at the bottom of the zone have had the best results. Take a look for yourself.

How in the heck can that be? The most readily-available answer is that we only have thirty teams and half a season’s worth of data, so that’s surely a limitation. But if this is a trend that continues, we may have another issue at hand – pitching down consistently is not that effective in and of itself, and maybe that’s because hitter’s have been programmed from a very young age to pick up on trends. By being consistently down the Diamondbacks have created a problem in that they’re predictable. Sure, there are lots of examples of guys who pitch down in the zone consistently and succeed, but remember, we’re not dealing with a high overall talent level here. Only the elite pitchers can be predictable and get away with it. Everyone knows Felix Hernandez’s changeup is coming, but good luck hitting it. The only pitcher you could possibly make that argument about is the newly-minted Patrick Corbin who’s heavily relied on a slider in the past and guys still couldn’t hit it. Hellickson has a changeup that’s good at times, so do De La Rosa and Robbie Ray, but they aren’t of the elite variety and their other pitches aren’t good enough to have their respective changeups play to maximum efficiency. This is an issue of raw stuff and the Diamondbacks don’t showcase enough plus raw stuff to get away with being predictable.

Or maybe this is just noise and there’s not signal here to be found. I don’t know. What I do know is that even in my limited mind I just don’t see the staff being able to survive if they’re not throwing hitters off. They aren’t going to throw the ball by a bunch of major leaguers, guys who can all square up 97mph if given the chance. These are guys can hit curveballs, they can foul off a changeup. Something tells me that throwing down consistently is something that other teams may have picked up on. Let’s check out how often guys are throwing down in or out of the zone. 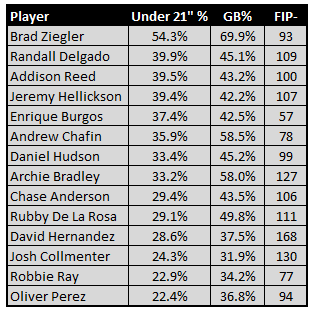 We see you Brad Ziegler, and for all intents and purposes, you’re exempt. But outside of Ziegler, we still have a bunch of low-ball pitchers. Jeremy Hellickson has the most of any starter and he’s not been good. Robbie Ray has the least of any starter and he’s exceeded expectations. Outside of that, it’s a real mashup. Enrique Burgos hasn’t pitched a lot be he gets so many strikeouts that a lot of this doesn’t apply. I don’t know what the hell Andrew Chafin is doing, but he needs to keep doing it. Read into this what you will, but if anything is clear, pitching down in the zone doesn’t necessarily mean that you’re going to generate a ton of ground balls and/or pitch well. That’s pretty damn evident.

And maybe this comes back to being predictable. Let’s say you’re stepping into the box against Jeremy Hellickson and you know that four out of every ten pitches is going to be at the bottom of the zone or below. You know that you can’t do a lot with those pitches and that he misses down a fair amount of the time. By eliminating that 40% of pitches from what you’re willing to offer at, you’ve just eliminated a lot of possibilities and honed in on your plan of attack. For example, what would you be looking for if this were his heat map? 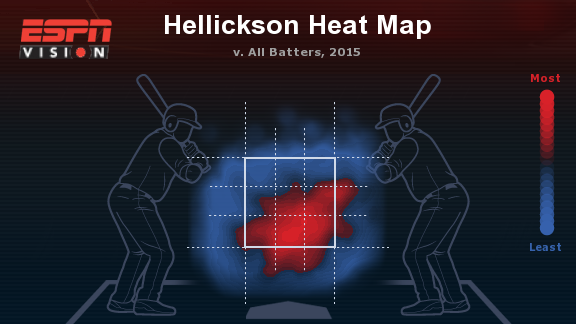 I’d don’t think I’d be fishing for that stuff that’s down, I’d be hoping to get something up. I don’t want to tinker with pitches low in the zone or just below because I already know how it’s likely to end up. Rather, I’m letting everything that looks low go – which eliminates a lot of pitches. And, it looks like batters are doing the same. Take a peek at where the pitches are that hitters are swinging at: 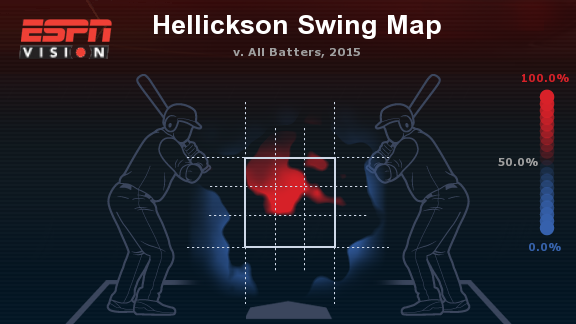 Let the low ones go, hit the ones he leaves up and out over the plate. That’s the hitter’s equivalent of what we said before about pitching down. And it’s apparently working as Hellickson, despite a decent start here are there (I’m looking at you, Colorado), doesn’t have much in the way of good results to show for his process. And, just maybe that’s because he’s throwing down in the zone so much. Maybe there are enough pitches down in the zone that hitters just know they can let them pass and wait for something else. Sequencing is huge here and while I can’t compute the pattern of the location of his pitches, I can tell you that if there’s any kind of pattern at all, a guy like Hellikckson, who lacks swing-and-miss stuff for the most part, is going to get punished. He’s throwing down, hitters aren’t swinging and when he comes up, they hack away. Sure, throwing down in the zone a lot is a great idea when we think about it abstractly, but only if you’re hitting the black consistently or guys are whiffing down there. If neither are particularly true, well, pitching down just isn’t going to help you a whole lot.

There are similar heat and swing maps for a number of other pitchers on the team and I’m not going to make this even longer by posting them, but know that just because Arizona is pitching down as much or more than anyone in baseball, while using more two-seamers and sinkers, that those pitches or their locations by themselves won’t solve the pitching problem in Sedona Red. Having crappy catchers when it comes to framing won’t help either. There are a number of things compounding the situation here. If anything, a few D-backs hurlers may benefit from mixing up their locations a little more frequently. If there’s one thing they can’t afford to be, it’s predictable, even if that predictable is down in the zone.