Patrick Corbin is Officially Back

Patrick Corbin’s 2014 Tommy John surgery was bad news for a number of reasons. First, it probably hurt like hell. Second, he didn’t get to pitch at all in 2014 and missed the first half of 2015. Third, it did cast some doubt on his ability to rediscover his role as a staff-leading pitcher. TJ’s are so common these days that many simply view it as an extended DL trip and nothing more. But while the names of pitchers on the shelf with a torn UCL start to fade away, so does our recognition of those who never return. The log of pitchers who’ve undergone the surgery is littered with names who never made it back or only did so briefly before retiring, getting re-injured or, perhaps the worst – getting jettisoned to AAAA purgatory.

Which is all to say that the kind of return we’ve seen from Patrick Corbin, over his first eight major league starts, was anything but a foregone conclusion. He could have been re-injured while rehabbing. He could have struggled to establish his previous velocity. The organization could have moved him off of his slider. He could have had severe trouble finding the strike zone. Any one of those things could have derailed his attempt to get back to Phoenix, back to the majors, back where he belongs.

But the good news is that none of those things have reared their ugly head and cost Patrick Corbin. Instead, he’s proving to be, so far anyways, another Tommy John success story. And I’m not making that assessment based on his 3.43 ERA. I’m not making on his 3.85 FIP or his 3.18 xFIP. It’s not even based on the fact that he’s been worth half a win over just 42 innings, putting him on track to regain his spot as the team’s most effective hurler. Instead, it’s built on a deeper level of analysis.

The Velocity is Back

While it’s not a perfect measurement, velocity is about as good of a proxy for arm health as we have available. If the arm is recovered and strong, the thinking goes, a pitcher’s velocity should be near the same level it was before the injury. In the case of Patrick Corbin, it appears that all is well. 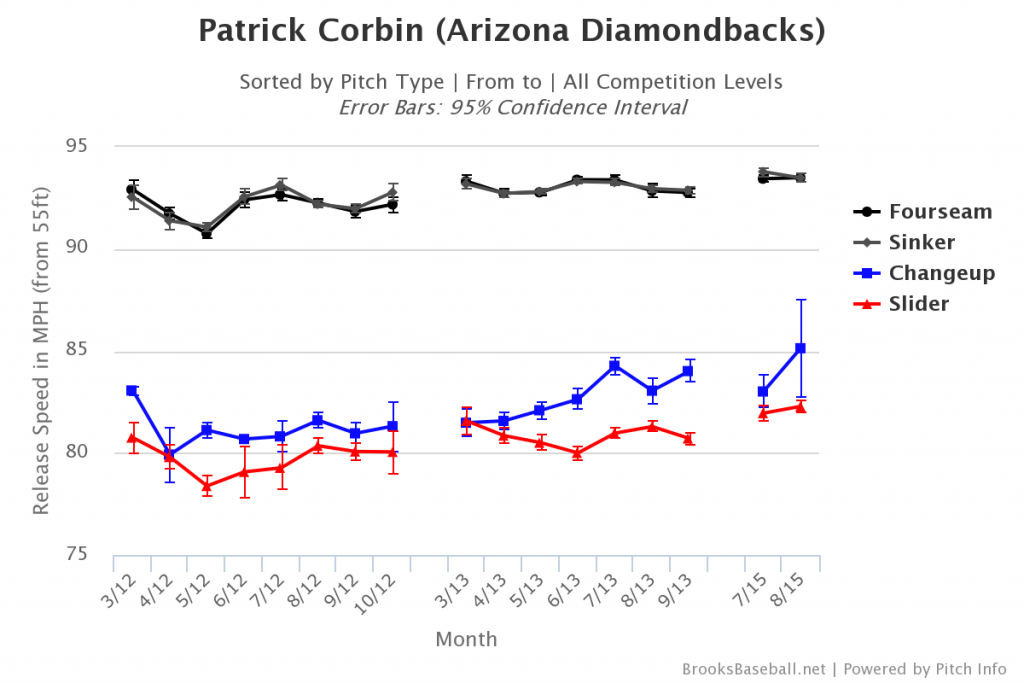 There have always been some fluctuations to Corbin’ s velocity, as is the case with virtually all pitchers, but if we look closely, we can see that he’s right back on track. Starting with his fastballs, his four-seamer ended 2013 at 92.76 and his sinker sat at 92.87. In August of 2015, Corbin has picked up velocity with his four-seam registering 93.49 on average while his sinker has clocked in at a very similar 93.48. His slider is up over a full mile per hour and his changeup has been firmer, too (although that may not necessarily be a good thing).

Putting it all together, it appears that velocity isn’t a problem. His arm is fresh now and it’s not likely that he’ll throw this hard all year long, but that’s fine. The important part is that he’s back on track and his arm is strong, right where it needs to be.

The Repertoire is (Mostly) Unaffected

The biggest question when Corbin returned was whether or not he’d continue to throw his slider with the same kind of frequency that he had prior Tommy John. It’s been surmised by many that the slider is a major culprit in damage to the elbow because of the stress that the breaking pitch puts directly on the UCL. The curveball, for example, is thought to place less stress on the ligament and be more sustainable. In 2013, Corbin threw a lot of sliders. In early 2014, his arm popped. Would he keep throwing the sliders upon his return? 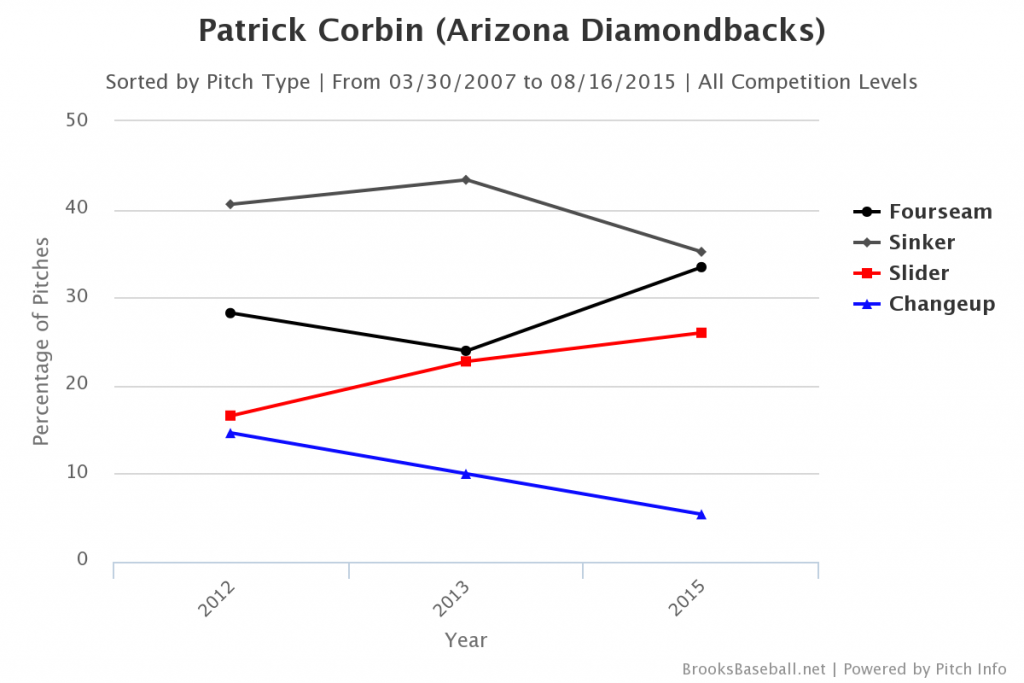 Well, that answers that. Corbin isn’t throwing his slider as often as he did previously, he’s throwing it more often. Apparently there was no mandate by the team that he reduce his usage of the pitch. I’ve long been a proponent of him throwing fewer of them and learning to really harness the changeup, but it is what it is. In 2015, he’s thrown more four-seamers and fewer sinkers, more sliders and fewer changeups. It’s just eight starts, so I don’t think there’s a ton that we can read into just yet, but it would appear that he’s able to use the pitches he wants, when he wants to. That’s another positive sign.

Of course, velocity and usage rates are just two component of a pitch. Having quality velo certainly helps, but big leaguers can hit a pitch of any speed, making movement critical. Lets’ take a look at Corbin’s movement, both horizontally and vertically. 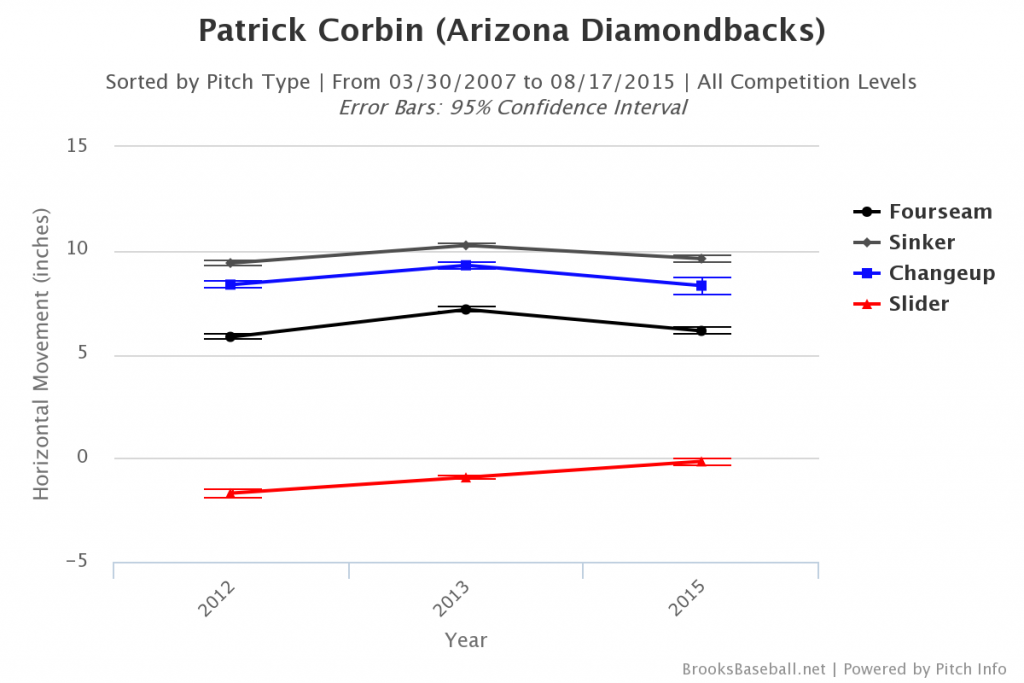 Corbin’s horizontal movement is down slightly across the board. Slider has lost about 3/4″ horizontally, while the changeup and sinker are both fading a little less. The four-seamer is also a little straighter. Keep in mind, however, that Corbin is throwing harder. When a pitch is thrown harder, it usually breaks less. There’s more rotation in-line with the plate and less moving side-to-side. Also, we’re dealing with a pretty small sample, so that’ worth remembering. 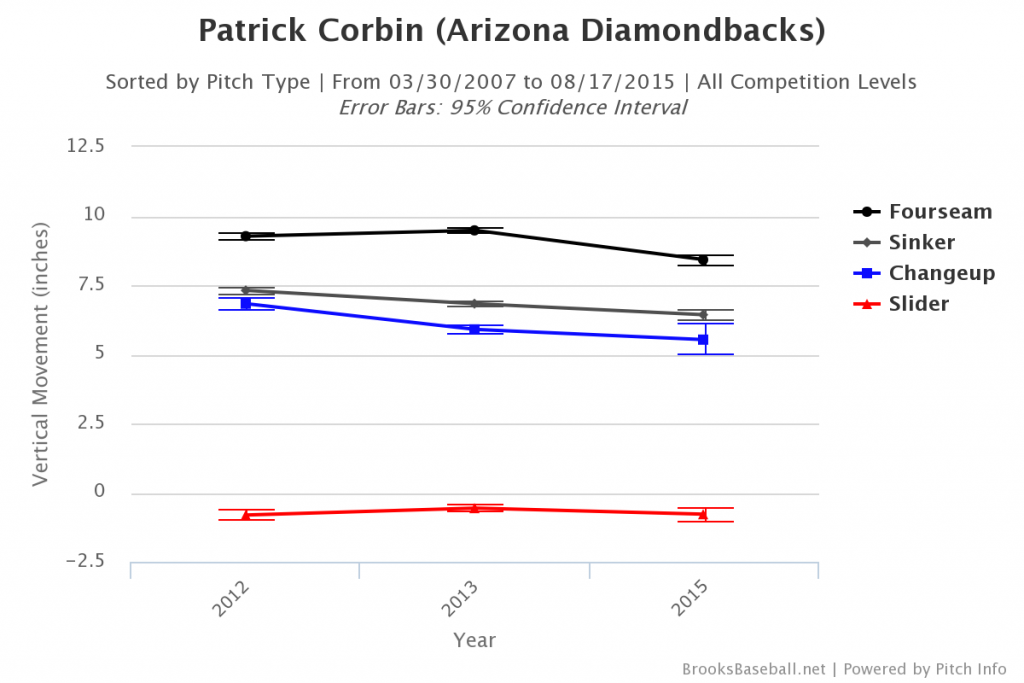 What Corbin has lost in horizontal movement, he’s made up for with increased sink. The slider is dropping slightly more while he’s also picked up extra vertical movement on the changeup and sinker. The four-seam fastball has had the largest change, dropping over a full inch more than in 2013. In terms of vertical movement, his pitches are dropping further than they did in 2013.

In sum, his pitches are harder, are moving a little less horizontally and a little more vertically. All of these changes are minute and none of them signal anything drastic. If there’s one takeaway, it’s that Corbin is pretty close to being his old self, and may even be slightly improved at this juncture, although that may be due in large part to the freshness of his arm.

Of course, the movement of his pitches are just one way of evaluating his stuff. There are outcomes to those pitches and we can also check to see how hitters are responding to them so far. Let’s examine the batted ball data for Corbin’s three big league seasons.

He’s generating more ground balls, which is good, but also allowing more home runs, which is bad. Those two things are perpendicular to one another and don’t mesh. Given that, it’s probably safer to err on the side of the grounders as we know that home runs are an unstable bunch and don’t always correlate well. Yes, Corbin’s been taken deep, but he’s keeping the ball on the ground and that skill set should carry the day, even if there is an occasional miss up in the zone that gets punished. He’s just getting comfortable again, so mistakes are not unexpected.

In terms of hit location, he’s being pulled way less as hitters are going up-the-middle and to the opposite field more often. At just 42 innings pitched, I’m not ready to draw any conclusions yet. In the hit-velocity arena, he’s getting hit less hard than before, which sounds great, but the same sample-size caveats apply. This is welcomed sign and we’ll have to wait to see if it continues. Putting his batted ball information together, his SIERA is fantastic and suggests that he’s been at least as good as before if not significantly better. Again, another welcomed sign.

So, hitters are putting the ball on the ground more frequently (good) and their hitting him less hard (also good). He’s given up bombs more frequently than before (bad), but the overall effect suggests that he’s still a very, very talented pitcher (very good).

If we look at the whole picture, we can clearly see that Patrick Corbin is back to form, at least for the most part. It was unrealistic to think he’d return without some rust or struggles, but he’s certainly minimized those things. Sure, his pitches aren’t moving horizontally as much as we’re accustomed to, and he’s given up more than his share of homers, but his velocity is up, he’s still able to throw his slider a lot, he’s generating ground balls and he’s not getting hit as hard as he did in the past.

That’s a pretty good start to The Return of Patrick Corbin. Of all the dozens of things that could have gone wrong, Corbin has emerged relatively unscathed. He’ll probably finish the year somewhere between 80-90 innings and be ready to go on Opening Day of 2016. This is all we could have asked for and the Diamondbacks are either good at rehabbing pitchers or incredibly lucky. Either way, it’s nice to have Corbin back in the fold and dominating once again.

6 Responses to Patrick Corbin is Officially Back