Beef Mode on Overdrive Patrick Corbin is Officially Back

Moving the roundup to Fridays has worked out quite well, thank you. At least, it did until the D-backs made two trades on a Saturday that didn’t necessarily warrant their own posts. So since it’s been six days, allow me to refresh your memory:

Neither of these moves are showstoppers, but both are solid little moves that were the result of a good approach, it seems to me. I’m guessing the D-backs shopped these players in advance of the trade deadline, held the line at a certain price, and found no takers. No problems with that. These moves are selling at the buyers’ desired prices, but it’s not like they jumped out and made these moves in early July; I think we can be really happy about the maneuvering here. Add another feather in the front office’s cap, along with the Mark Trumbo trade that brought Welington Castillo to town, which is paying out more and more by the day, as Jeff wrote yesterday.

Perez to the Astros is fun, in part because they’re cornering the market on “guys who got lefties out sometimes with the Diamondbacks,” adding him to LHP Tony Sipp, RHP Will Harris (who fit well versus LHH), and also LHP Joe Thatcher, who was re-signed by the Astros three days prior to the Perez trade after being designated for assignment and electing free agency. Fun times. When they picked up Sipp and Harris, those moves came off as “why not” kinds of things — the Astros weren’t necessarily close to contending, and short-term relief pieces would be the crown molding for a house still being renovated. At this point, though, considering how much brain power they seem to put into everything — see the Collin McHugh story as an example — do the Astros know something we don’t?

I’m not your guy to help you with Junior Garcia, but there’s probably some kind of story there — he hasn’t pitched much in organized ball, and this year, the Astros had kept his appearances/starts very short (3 innings, 42 pitches last time on Aug 5, 5 innings, 55 pitches on July 31, and no outing longer than 5 IP this year). Help yourself to some stats. He’s young, he has an arm, and some day we’ll learn more. Perez wasn’t going to do much to help the club this year, and he could still come back next year (I saw one such rumor, but I apologize, I can’t remember/find the source on that). Until we learn more about Junior Garcia (he’s not this guy), maybe we can just say: at least they didn’t get Senior Garcia.

As for the Pennington trade — good on them for cashing out and moving on. I threw out some thoughts on trading Penny in our trade deadline version of the roundup, and those still seem on point. There’s also this, more recent transaction:

I’ll also defer on Dawel Lugo, who may have a similar ETA to Garcia (2019?) — he’s a little older, but has been slow to advance and may need more time than average for his bat to develop (although I’ll note decent numbers for extra base hits). As Jeff noted, the Blue Jays bounced him back to Low-A after moving him to High-A to start the season, so there are some blemishes on his record. He also doesn’t necessarily look like your typical shortstop, but again, why am I even still typing things right now? Here’s a video with some still images of Lugo panning and scrolling, with a narrator reading the mlb.com scouting report (also, love that url).

More on both trades in a fresher format with fresher mouths in a podcast that isn’t but should be sponsored by Mentos:

Over the last 30 days, David Peralta is slashing .413/.440/.675, which is stats for “Ted Williams in a particularly good month.” I happened to see Adam McFadden mention Peralta in a piece today, and he pointed out that a .536 BABIP is not sustainable. It’s true. But if you’re reading this, you probably saw my case last week for how Jake Lamb‘s unusual collection of very hard hit balls warranted his high BABIP, even though his average batted ball speed was not spectacular.

We can run Peralta’s last month through the same wringer. We’re talking 40 tracked batted balls, so this is a bumpy ride, but:

Lucky? Not really. Add or subtract one hit from the meager numbers here, and you’d be pretty much on target for the D-backs. The part that is TOTALLY (#*$@#&^ ABSURD is the NUMBER of hits in the top buckets. This graph shows the percentage of batted balls in each bucket for Peralta in the last month, and for the D-backs overall through the Lamb piece last week: 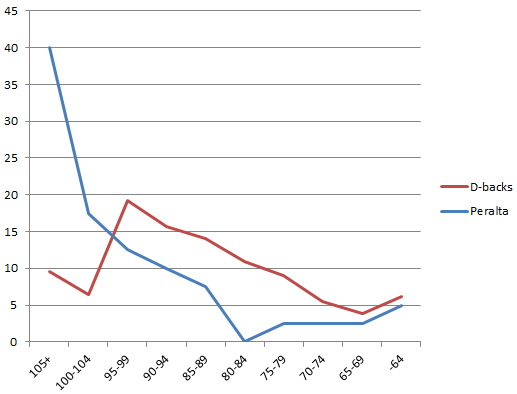 The red line bends up at the ends only because I cut off the buckets — the 105+ bucket is really 105-120 or so, etc. The bucket with the highest frequency of hits has been 95-99, which is also quite good. Not too many hitters can hit more than a few balls over 100 mph.

Over the last month, MOST OF PERALTA’S BATTED BALLS HAVE BEEN OVER 100 MPH!!!!! For the D-backs as a whole, the percentage of balls hit 100+ mph is just under 16%. For Peralta in the last month, 57.5%. Considering batting average on those balls has been around .765, that’s enormous.

In other words, Peralta may be doing something unsustainable, sure. But don’t call him lucky. He’s earned every single one of those hits.

It’s partly a result of approach, as I wrote on Monday. He’s jumping all over 0-0 pitches (remember the home run off Matt Harvey?). The grand salami on Tuesday was also a smoked 0-0 pitch.