When Goldy made the Near-MVP Leap from a 124 wRC+ 2012 season to the 156 wRC+ level he attained in 2013, it seemed almost too good to be true. Here he was, this guy who was supposed to be pretty good but probably not great, and his hot start that year just never seemed to disappear. It was a new normal — he showed us that by coming right back in 2014 at a 155 wRC+.

I love wRC+ because it weights everything according to how much they actually matter to scoring runs, but it’s hard to keep track of what “55% above average at creating runs” actually means. That new 2013 standard was as different from Goldy’s 2012 as Ender Inciarte (90 wRC+) has been from Nick Ahmed (64 wRC+). When Goldy broke through that year, he had more PA than in his previous season (from 587 to 710). But even accounting for that, that massive 30 point leap in wRC+ was the difference of just 20 Runs Created, which probably doesn’t sound as impressive as it really is.

You knew where I was going with this — Paul Goldschmidt has played four months in this 2015 season, and he’ll eclipse his plate appearance total from last season this coming weekend. The level he’s played at this season is as different from 2013-2014 as those seasons were from 2012. It’s another 20 Runs Created, over a full season again — prorating to 710 PA, from 108 to 128 to 148.

I can’t tell you whether this 179 wRC+ is a new normal, but I can tell you it would be patently ridiculous if he did. Once again, we find ourselves asking who Goldy really is. I don’t know. But a question that maybe we can answer is whether he can keep this up even if he is something new.

It’s Lonely Up There

Nelson Cruz started the season ridiculously hot, and has been back to mashing at a confusing rate again lately. Joey Votto, Mark Teixeira and Alex Rodriguez are having big time returns to big time production. And none of them can hold a candle to what Paul Goldschmidt has done so far this season. With respect to players qualified for the batting title, Miguel Cabrera and his 182 wRC+ have nearly slipped off the list; that would leave Mike Trout (185 wRC+) and the probably incomparable Bryce Harper (206 wRC+) as the only players that have something on Goldy’s 179 wRC+ so far this season, with 103 games played and 457 PA tallied.

With so much playing time to go around, the top guys at any one position can only do so much to bring up the average. But I think it’s still worth nothing that this is kind of a Renaissance for first base, this 2015 season. Of 24 first basemen qualified for the batting title, probably 13 or 14 have produced at level we might call “way above average.” 14 have a higher wRC+ than A.J. Pollock, anyway, which is pretty crazy. 7 have a wRC+ of 150 or higher, which is stupid crazy. Last year, the total at the end of the season was: 3. And Edwin Encarnacion and Anthony Rizzo really just scraped by. It’s a big year, and the fact that Goldy can still distinguish himself within that crowd is pretty remarkable.

His season so far has really been an outlier. Over the last five full seasons, a player has qualified for the batting title 598 times. Only 5 of those 598 seasons hit 175 wRC+ or above, and only 41 were at 150 wRC+ or above. The baseball world is a different place now — fewer runs are scored per game. But because wRC+ is keyed to league average, it really is the perfect way to look at how unlikely a season really is. The extent of Goldy’s greatness this year is the first reason to suspect it can’t be sustained.

Better to be Good and Lucky

The fact that what Goldy has done thus far is so unusual over a full season should also cause us to question the role of luck. After all, if seasons at this level are that rare, and if it’s possible for great players to get lucky, then maybe we can conclude that players who reach a level like 175 wRC+ over a full season are probably both great and lucky. Luck could entail the quality of the pitching in your division (thanks, unbalanced schedule!), or whether there are great hitters around you, or whether you’ve caught a few extra breaks in terms of where the ball falls.

As for Goldy’s quality of competition, I rely on the “oppTAv” stat at Baseball Prospectus, which uses their catch-all rate stat for hitters, calculates the TAv yielded by individual pitchers, and then weights that to tell us how tough a task a hitter has had. It’s one way to tell whether a batter’s small sample success is a mirage, but over the course of a season, these things tend to even out. The .263 oppTAv for Goldy suggests that he’s faced pitchers just a touch easier than he might have had he played in the AL East, but we’re talking about the difference of maybe one hit or walk over the course of a whole season.

Really, it comes down to two things: BABIP, and walks.

Batted balls have turned into hits 29.8% of the time this season (that’s a bit down), for a .298 BABIP. Few players can stay far on top of .300 for long, and usually when we’re saying that we’re referring to fast players who can stick around .320 or even .330. Goldy’s is .395 this season, up from .368 last year and .343 and .340 the previous two seasons. This is exactly why I’ve been so hot for Jake Lamb, too: guys who consistently hit the ball hard seem to be able to maintain high BABIPs, just like fast players. Home runs are not “in play,” and that’s not what we’re talking about — and yet many big time home run hitters tend to fall in this category. Are you swinging for the fences constantly and sometimes getting there, or are you just hitting the ball hard and collecting those deep bombs as you go?

Goldy doesn’t destroy baseballs the way that a Giancarlo Stanton or even Mark Trumbo does. Average batted ball velocity isn’t equal, because the relationship between batted ball velocity and BABIP isn’t linear; there’s very little difference between 50 mph and 70 mph on a ground ball, but there’s an enormous difference between 85 mph and 90 mph. We’ve been over this ground before, but nothing has really changed: Goldy’s batted ball velo justifies what is really an insane BABIP of .350 or so, among the tops in the game, but that doesn’t get us all the way to .395. He definitely looks at least a little lucky, and 50 points of BABIP, if that’s really what it is (I suspect his type of loft is also particularly effective), is a substantial difference of about 14 hits right now, enough to drop Goldy’s average from .342 to .302.

We’ll see on BABIP; poking holes at that is kind of begging the question, since that’s usually what making The Leap actually means (Bryce Harper’s .370 BABIP this season is more than a little higher than his .328 career mark). But what about walks?

At this point, Goldy is running circles around the notoriously patient Votto in terms of a walk rate, reaching first via the free pass a whopping 18.2% of the time. Goldy’s 83 walks lead the majors by 6 right now. He’s tied for third in plate appearances, but 61st in at bats. Ridiculous.

Lineup protection is a hard subject to pin down or refute, but maybe we can all agree that it’s all relative. No doubt, a pitcher would rather throw to Chris Owings and his 52 wRC+ than to Ender Inciarte and his 90 wRC+. But if the hitter you’re opting to pitch around is a 128 wRC+ David Peralta, does it affect your decision very much whether the next guy is either Owings or Inciarte?

Maybe. But Goldy enables us to make a fact set much more absurd. He does, after all, have that 179 wRC+ and the .592 slugging mark that helped him get there. Does it really matter who the next hitter is, Owings, Inciarte, or even Peralta? The gap is just so enormous. Maybe if you have a 140 wRC+ type and you’re afraid of Goldy circling the bases. It has a lot to do with the situation and what the pitching team stands to lose, but maybe, suffice it to say that there’s no second hitter on the D-backs that would make another team feel obligated to pitch to Goldy, short of the bases being loaded. Sure seems like more and more pitchers are acting that way, anyway: 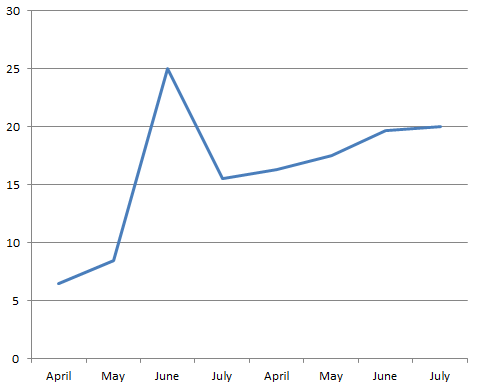 That’s an extremely high walk rate and it does seem to be reaching a new normal of its own, but how different is 20% from, say, 17.5%? In a single month, that’s: two extra walks. Maybe we can pump the brakes in terms of jumping to conclusions.

In fact, I’d like to offer an alternative explanation: 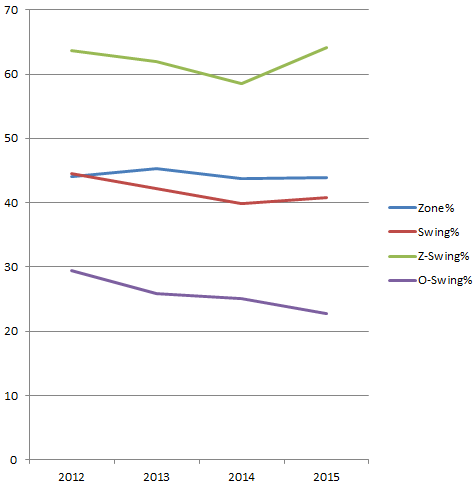 The blue line — that’s the percentage of pitches seen by Goldy in the strike zone, and that has changed almost not at all. Really; last year it was 43.8%, and this year it’s 43.9%. Both rates are low, no doubt about it, but that’s not the Big Difference this year.

It’s also not really a matter of swinging more, as the red line shows. It’s up one percentage point, but even if you were trying on purpose to swing at an identical rate of pitches, I doubt you or I could get within 1% even if it were the only thing we were trying to do.

It’s all about the other two lines. Goldy has stopped swinging at as many pitches outside the zone, going from a selective 25.1% swing rate to a “how, even” 22.7%. Good for him, right? But couple that with the green line. It’s as if Goldy was fed up with seeing more pitches outside the zone last year, decided that he couldn’t force pitchers to throw in the zone any more than he was already, and decided that he would find a way to do more with the pitches in the zone that he did get. That’s what it looks like.