As Hitters Figure Out Daniel Hudson, a Challenging Puzzle Looms

Daniel Hudson dominated in his first few outings by dominating the zone. He had that catch up with him at the end of April, but he saw his velocity rise for excellent stretches in May and June. His July results were also great, but maybe partly through some luck — and his August appeared pretty bad. Hudson has tallied just 55.1 innings, but there’ll be enough plot here by the end of September for Hollywood or Tolstoy, ending to be determined. Such is the life of a major league reliever, I suppose, but whether that’s the life he should be leading is, I think, an open question.

The short outings have definitely helped Hudson attain a new level, in terms of velocity. In each of his seasons before 2015, Brooks Baseball has max release speeds for his four-seam between 96.35 mph and 97.44 mph. This year, it’s gone nowhere but up: 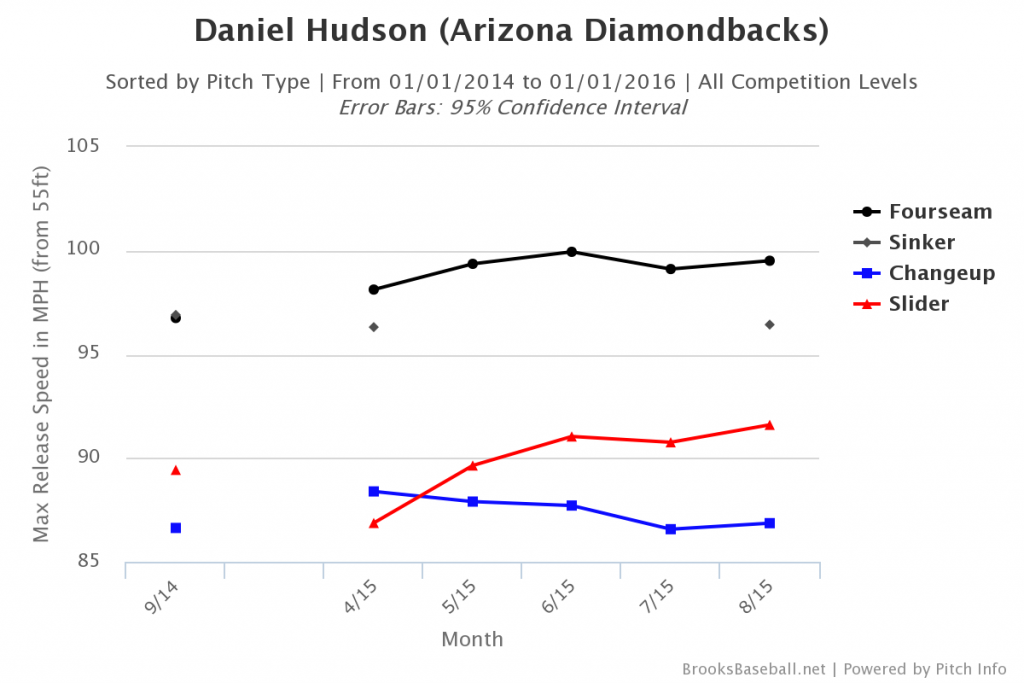 And that’s just threw August. Just now in Denver, Hudson hit 99.6 mph on a four-seam, according to Gameday; that’s not up at Brooks yet as it just happened a few minutes ago, but in terms of release speed, you can bet Huddy’s new max will get over 100 mph. He just keeps pouring it on.

The month-to-month samples are oh-so-tiny here, and even though FIP was as freaked out by Huddy’s August as ERA was, SIERA takes his fairly high ground ball percentage that month (50%) and worries a little less about the three gopherballs he happened to give up in the month.

Note the blue line on the graph above, though. While Hudson’s average release speed on the four-seam is more like just over 97 mph, that’s still a pretty big upgrade from years past — and yet the average speed of his changeup has not ticked up to match, instead trending somewhat downward. In April, Hudson had an average four-seam velocity of 96.19 mph, changeup 86.23. By August, that had increased beyond 10 mph to nearly 12 mph (97.18 and 85.36). It’s not a huge thing, but opponents slugged much better against both pitches in August than they had for most of the season (.737 for the four-seam, .400 for the change).

It’s a long way of saying that while Hudson’s uptick in velocity has been something to behold, it may not have made him a more effective pitcher. The fact that he may return to the 95 mph range should he be moved back into the rotation is not something to worry about a whole lot, probably. There’s a good chance that by pumping up that velocity, he’s been easier to figure out.

What to do next with Hudson could be a much more difficult puzzle. That turned out to be a key consideration in stacking up next year’s rotation and how close it is to where it needs to be for a probable playoff berth. There, it looked like about 15 wins would be needed from the rotation, an average of about three per slot. In discussing in-house candidates:

the one with the best major league season as a starter is: Daniel Hudson, who spun a 4.6-win season in 2011. He can’t and won’t repeat that 222 inning performance next season, not with the strong likelihood that he’ll be four and a half years removed from throwing more than 70 innings in a season once spring training starts in February. He does offer upside, though. If he could pitch a half-season of 4-win quality, with someone like Blair filling in as a 2-win guy for the other half of the season — that would meet the 3-win threshold. It looks very likely that the team will need to make sure no value slips through the cracks, that it’s not taking on water anywhere in the rotation. This could be an upgrade that makes sense.

With just under five weeks left in the season and Hudson not currently stretched out, he’d probably only end up at 80 innings, at most, even if the D-backs transitioned him into a starting role right now for the rest of the year. It wouldn’t be a platform to starting all year next year, at least not necessarily, but maybe it could be a springboard. After all, Hudson’s few outings at the end of last season, in relief, seemed to set the stage pretty well for this year (compare Matt Reynolds, who was only two weeks behind Hudson in rehab).

Hudson is only under contract for this season, but even though he was briefly a free agent after he got non-tendered at the end of the 2013 season and the contract he signed shortly thereafter will soon expire, he’s still under club control next year but eligible for arbitration. Still just 28, he’ll be 29 when he hits free agency, assuming he’s tendered a contract this fall [sidebar: if he doesn’t settle early, his arbitration case could be one of the most interesting thought puzzles in these parts this winter]. Assuming no setbacks, whatever happens next year, it’s unlikely to lead to a one-year deal in 2017. The D-backs might be able to bring him back on a three year pact or something of that nature, but should they bet to win with him next year, they might not be frittering away an opportunity to go below-market with him after 2016.

I don’t know Hudson’s thinking, but assuming he’d like to be a big league starter again, he probably needs to start next year, at least for part of the year — his only other option would be to jump from a reliever-ish 65 or so innings in 2016 to whatever was needed from him in 2017 as a starter. Even if he avoids major injury in the process, he’s likely to have some flare ups along the way to a full starter-ish 170 or so innings in 2017. It just makes for a less than ideal situation for Hudson to go out on a limb on a one-year deal for 2017, because he’s unlikely to be in a much better bargaining position in the 2017-2018 offseason. If Huddy is gunning for a return to the rotation, he kind of needs to start for part of the year next year — or else hit the market as a reliever looking for a starter’s deal, while carrying with him the baggage of possibly needing a bridge year in year one of his new contract.

So there’s a real tension here. Hudson’s best position for free agency is probably just over a year from now, but only if he starts for part of the time between then and now. Meanwhile, the team doesn’t really have a long term interest in his long term success, other than the responsibility I’m sure they feel for protecting his livelihood. Teams don’t tend to buck convention in ways that we generally connect to injury, at least not more recently — and yet in Hudson’s case, there is no convention. Any answer, including starting him all year next year, could be the right answer. There’s no way for them to look wrong, I think.

I’m glad it’s not my decision, and I hope Hudson and the D-backs work together on a solution that makes sense to and for everyone. My guess, though, is that he may start part of the year next year — he’s not looking like the closer heir apparent, at least not right now, and he’d be an uncomfortable fit for a role that required such an irregular schedule. Not sure whether it’d be at the beginning of the season with the benefit of spring, or at the end of the season, when timing can match need but he’d need time to stretch out — but chances are, the team will use him in a starting role for part but not all of next season.

5 Responses to As Hitters Figure Out Daniel Hudson, a Challenging Puzzle Looms