The Undoing of Chris Owings Double Plus: Robbie Ray and “The Slurge”

This bizarre game that we love offers a good chance to use statistics because so much happens. Hundreds of plays in the field for most starters, hundreds of trips to the plate. Random things still can and do happen, along with things we can’t or don’t measure as we look at those events. Even more common than events on the field — balls in play, walks, strikeouts — are pitches. And just as we can study a pitcher’s velocity or movement or sequencing in smallish samples, the pitches seen by individual hitters really starts to add up. Through Tuesday’s games, Ender Inciarte had seen 1,855 pitches. A.J. Pollock, 2,185 pitches. And Paul Goldschmidt has seen 2,677 pitches — stretch those out to one per day, and that’d be over seven years.

Look at individual pitch types, though, and the samples get smaller. To stay meaningful, I’m going to look at five D-backs position players that have topped 800 PA with the team over the last two seasons (for more on the other guy, Chris Owings, check this out — he has normal pitch splits). For a baseline, here are the D-backs’ team pitch splits so far this season, from ESPN Stats & Info: 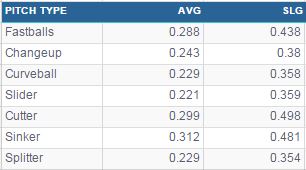 Here are the numbers for the other four NL West teams, averaged together: 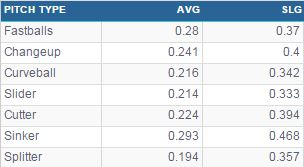 There are very few splitters, so don’t dwell on that — and these pitch types come straight from the PITCHf/x algorithm, so there are fewer sinkers (and probably cutters) than we’re used to when working with Brooks data (the rest are in “fastballs”). Suffice it to say that the sinkers here probably tend to have more sinking action than the average. And while the D-backs don’t do as well against breaking stuff, they’re still above average — and we expect that, because breaking stuff ends out of the zone more often, and pitches out of the zone have lower AVG and SLG because when they’re swung at, it’s often a mistake swing or a poor one.

You can see, though, that the D-backs are slightly better across the board, with the exception of cutters, which they’ve seen about 5% of the time, but which they’ve completely dominated. This completely fits with what we’ve seen in terms of the D-backs hitting the ball hard more regularly than other teams, led by the top five of Goldy, Peralta, Lamb, Tomas and Pollock. A lot of it is bat speed, and refusing to slow the bat down — but a lot of it is barrel skill, moving the bat in or out horizontally to sweet spot the ball more regularly. If they were great at that skill, we might see better than average numbers against cutters. 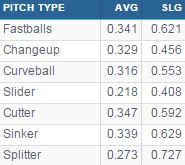 Hey, what do you know — Goldy is awesome at everything. Or, almost. Sliders can still get the man out, but his results against every other pitch are superlative. Curveballs are one way that he really sets him apart — and he does that by not swinging at curves out of the zone. An underrated skill, probably. If you were an opposing pitcher with a fastball/changeup/curveball repertoire, maybe just give up. And as for the D-backs — if they follow through and actually do rest Goldy a bit more next year, it wouldn’t be the worst thing in the world if some of his sits were timed with opposing starters who feature sliders. 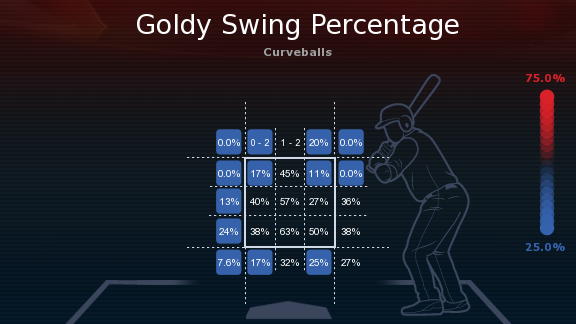 The Freight Train punishes hard stuff. He’s not in the zone very long with that bat speed, but there’s nothing wrong with the man’s timing, or his ability to barrel the ball. The struggles against off-speed pitches aren’t really struggles; and at any rate, he has a pretty great record with not swinging at pitches out of the zone.

There’s still the platoon splits to contend with; these numbers are from both 2014 and 2015, and Peralta’s liabilities against lefties in 2014 were very real. This is a guy, though, that in reality moved very, very quickly once he became a full time position player; he’s a quick learner. Getting on top of lefties this year is a truly amazing feat. Looking at the pitch by pitch splits, you wonder if the pronounced platoon splits played into Peralta’s hand. Maybe the pitchers he went up against pitched to him as if he was a guy with a big platoon split? At any rate, Peralta had 4 hits on 6 AB-ending cutters, and 4 hits on 22 AB-ending curveballs. Cutters and changeups, pitches that live or die based on their movement being unexpected, might play right into Peralta’s sweet-spotting hands. 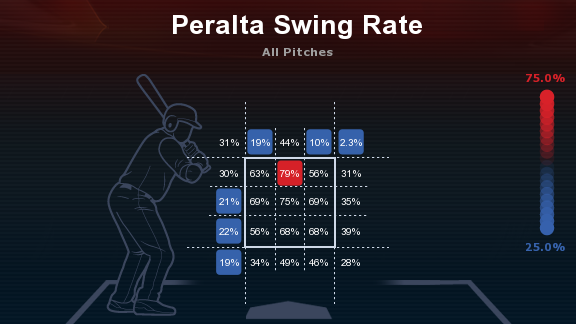 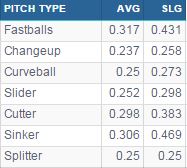 This is a very vanilla readout, here. The only things that stick out to me are 1) not much sticks out to me, and 2) it looks like Inciarte looks to drive different kinds of fastballs and collects his doubles that way, but he may be more concerned with getting the bat on the ball with offspeed pitches. It’s working; Inciarte has shown an especially good vertical bat to ball skill, juicing a few extra line drives than the average hitter. Leading up to his DL stint, that skill had evaporated a little bit — maybe he was feeling it before he was feeling it. I think the takeaway, though, is that Inciarte is the guy to whom you say yes. He’s not off the charts for any particular element of a pitcher’s repertoire. Compared to the average hitter, Inciarte does disproportionately well against off speed stuff, at least from a batting average perspective. Compared to his outfield mates, however, Inciarte’s profile is very bland — I think we can safely say that other players’ strengths and vulnerabilities might be better used as the considerations for playing time. Inciarte, you can just plug in. 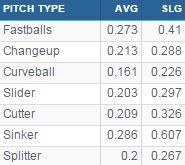 This is where we are now with Hill: not very far. He’s down below average across the board, still pretty effective when making contact on fastballs and not standing there with the bat on his shoulder if he gets a fastball with two strikes. If he’s slowed down, he hasn’t compensated at all by starting earlier; if that were the case, we might expect him to be doing comparatively better on the off speed stuff.

There has been one pretty big change to Hill’s game this year: after being a fly ball hitter for his entire career, his ground ball percentage has jumped from 34.3%, 38.6% and 34.4% in his first full seasons with the club to 44.3% in 2015. He’s getting on top of the ball a bit more, and probably a bit too much given his swing. It’s good to have the tendency opposite the pitcher you’re facing; if a ground ball pitcher gets players on top of the ball especially often, a batter who gets under the ball especially often matches up well.

Or, maybe there’s a simpler explanation: Hill is putting the bat on sinkers more often than he used to. Yep. Probably. 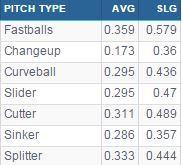 Pollock capitalizes on fastballs more than the average player, but it looks like a lot of his success can be attributed to handling breaking pitches. We’re talking 334 curveballs here and 706 sliders, 78 at bats that ended with a curve (doesn’t count walks) and 200 that ended with a slider. A difference of 80 or so points in average is not insignificant, and probably represents skill. Pollock did handle sliders in his 2013 playing time (.319 with a .462 SLG), but he had very poor results against curves (.114, .114). Maybe Goldy rubbed off on him a bit?

With the success against sliders and cutters, the high BABIP and a growing batted ball velocity record that does show he hits the ball hard somewhat more often than average, it looks like Pollock has that horizontal bat-to-ball sweet spot skill. Continued struggles against changeups, though, could be a straight up timing issue. It’s a fast bat but maybe a longish load. On changeups after a fastball, though, Pollock is not nearly as bad on changeups — .250 average and .500 slugging (20 such AB-ending changeups). It’s probably not so much getting lulled into being surprise; it might be a thinking thing. Two of the classic pitch side dishes for pitchers with a fastball buffet are changeups and sliders (I feel like curveballs are kind of off on their own island, unless the pitcher is throwing high fastballs to mask them). After a changeup or slider has been thrown, maybe Pollock is thinking fastball instead of just seeing one; and when he’s ended an at bat on a changeup after seeing a change or slider, he’s hit just .077 with a .192 slugging percentage in 26 chances.

Would you even risk trying to change him, though? I don’t think so. He’s a finely tuned machine that excels at everything at the plate, trading a bit of patience for extra hitting success. The man already seems to get extremely frustrated when a call gets missed for a called strikeout, so we probably wouldn’t advise more patience, either. Some lesser performance against changeups is not anything to lose sleep over (and some of them are hard to hit, as Chase Anderson demonstrated last night). Still, assuming there’s an outfield playing time crunch again next year — good changeups would be something to keep in mind when finding a day off for Pollock.