How Much of Greinke’s Sparkling 2015 Was Luck? Double Plus: Weird Sauce Bench Candidates

It would appear that Robbie Ray is some kind of Inside the ‘Zona favorite. In the short time that he’s donned Sedona Red, he’s been covered here at length. Initially it was talking about the trade that brought him to Arizona. Then it was talk of his new breaking ball and how he was getting the job done with fly balls. Ryan had the fantastic idea of teaching Robbie the Dan Warthen slider, which was one of the smarter things he’s written here (which is saying quite a lot). But after all the tweaking and struggles with his breaking ball, we eventually deemed it The Slurge in honor of the great comedian Will Farrell. You might have heard of him.

It’s hard to tell from the tone of these suggestions that Robbie Ray was a good pitcher last year. He really was. The rotation was a sore spot for the team, obviously, but you had to feel good about how well Ray transitioned to pitching in Arizona and the steps forward that he took. Despite really living off of the fastball and the changeup, he managed to mix enough command and control with good stuff to get the job done most nights out. The breaking ball remains a work in progress, but all-in-all, it’s hard to complain about the lefty’s first full big league season. He heads into Spring Training with a rotation spot to lose and has 127.2 more innings under his belt. As logic would have it, things should be looking up for him.

For things to truly take off, though, there is one big improvement that needs to be made. That improvement is getting him out of innings more efficiently. This is likely linked to the breaking pitch (give him a cutter?), but regardless of his repertoire, it’s worth noting just what a tough time Ray had logging innings last season. Of 133 starters with 100 innings or more pitched in 2015, he ranks 115th by averaging just 5.5 innings per start. For the Diamondbacks to get more production from him, he’ll have to get through the sixth inning regularly, and hopefully get himself into or through the seventh on more than a few occasions.

With this in mind, I got to wondering why he had such a hard time getting through more than five innings. He was above average as a pitcher when on the mound, he just wasn’t on the mound all that much (in terms of innings pitched) compared to most of his peers. So what held him back?

To get rid of opposing hitters, the pitcher needs one of several outcomes to occur. One of those outcomes, to simplify, is to get hitters to put the ball in play early in the count and hope for an out. That is both economical and often productive. The problem is, sometimes hits fall in or just leave the yard altogether. So trying to keep them from hitting the ball becomes more advantageous, especially if you’re not an extreme fly ball or ground ball pitcher. As we explored earlier this week for relievers, controlling batted balls and staying out of the middle of the distribution pattern is helpful if you’re not going to strike a large number of batters out. Ray’s strikeout rate was good, but not great.

Putting the ball in play early and often wasn’t a strength for Ray as you probably noted, hence all of the short outings. Instead he played keep-away, but played it almost too well. He wasn’t one to allow balls in play easily, many times to his own detriment. To examine this, I looked at how Robbie Ray fared in two-strike counts. But I needed some context, so I grouped him with two other Diamondbacks pitchers. One was Zack Greinke because, well, if we want to know what the fantastic end of the spectrum looks like, Greinke is the guy. The other was Patrick Corbin since a significant step forward for Ray might make him Corbin-esque. No one would complain if Robbie Ray turned into Patrick Corbin 2.0. In fact, most of us would celebrate this. 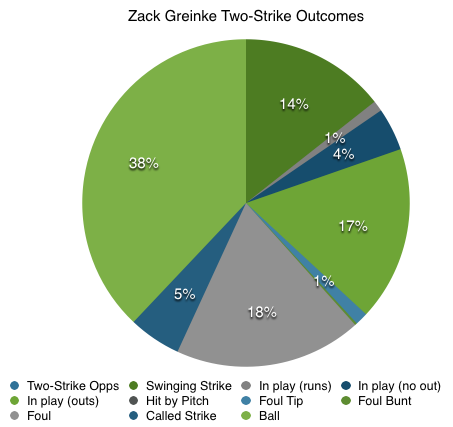 Greinke logged a lot of innings in 2015. 222.2 to be exact. He found himself in over 950 two-strike counts over the course of those innings. Because he got ahead often, the followed up those two-strike counts with balls frequently (38%), trying to get hitters to chase. That worked often as he got 14% swinging strikes. He got 5% more called strikes in two-strike counts, meaning he struck the batter out nearly 20% he got them to two strikes. Hitters fouled off two-strike pitches 18% of the time. They almost never notched runs off of him in these counts and hit into outs over 17% of the time.

Now let’s have a look at Mr. Corbin in the same situations: 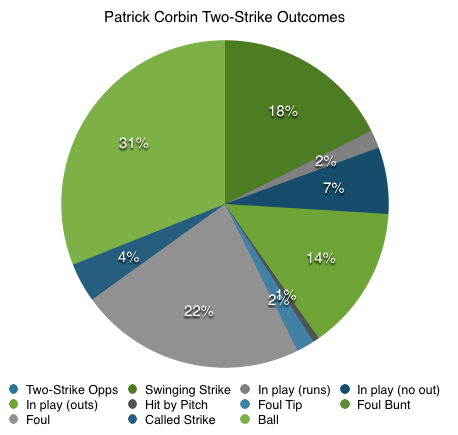 Corbin only threw 85 innings and didn’t have nearly the chances that Greinke did, but that’s why we’re using percentages and not raw counts. He threw balls in two-strike counts only 31% of the time. Batters swung and missed at two-strike offerings nearly 18% of the time. Hello, wipeout slider. Corbin got a called strike nearly 4% of the time and 22% of his two-strike attempts were fouled off while they hit into outs 14% of the time.

Now for our course, Robbie Ray: 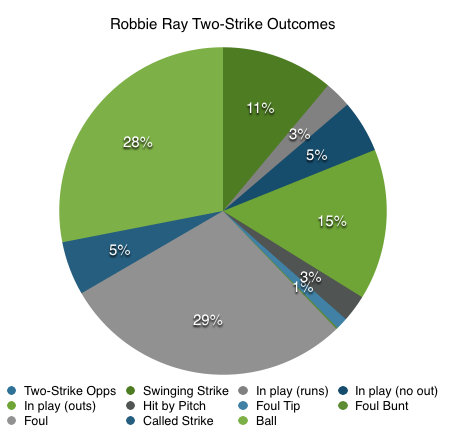 Ray got more opportunities than Corbin did but not nearly as many as Greinke. He didn’t throw as many balls in two-strike counts as the other guys (28%), nor did he illicit as many swinging strikes (11%). Batters hit into outs as often as they did with Corbin, but there’s still some outcomes missing. Look no further than two-strike pitches hit foul (29%). Ray’s two-strike attempts were fouled off 6% more often than Corbin and over 10% more often than Greinke. I can assure you, those are big gaps.

The great thing about any two-strike pitch is that it has the potential to end the at-bat. The problem with fouled two-strike pitches is that the do anything but create the desired outcome. Instead, they extend at-bats. Longer at-bats means more pitches and, yeah, you can see where this is going. If we need a reason for Robbie Ray’s lack of innings pitched per start or, rather, high pitch counts in the fifth inning, this is a big part of it.

This isn’t breaking new ground. Instead, I think it’s a reconfiguration of something we witnessed time and again in 2015. It has to be addressed if Ray is to take a step forward or even reach a level where he can be counted on to keep from ensuring that we see the middle of the team’s bullpen put to work in most of his starts. Frankly, Ray needs a way to get out of these counts without the foul balls. More could be put in play or more could be swung at and missed. I don’t really care. Okay, I care a little – more strikeouts would be best. But some kind of improvement is absolutely paramount.

If you’re looking for a way for Robbie Ray to improve, this is it. He has fastball command. He can turn over a pretty good changeup. The velocity is strong from the left side. A breaking pitch that can prove a reliable piece of the repertoire could be even bigger than we’ve imagined. Maybe it’s time to scrap it and give him a cutter. I don’t know – I’ll leave that to the experts. But an improvement here is needed or it’ll be more decent, albeit short, outings for Robbie Ray. The team is in a better position to handle those in 2016, but can you imagine the benefit of not having to mess with them in the first place?

This is surely something to watch in the coming weeks as Ray takes the mound in Spring Training. Is the breaking ball sharper? Are hitters fouling off a lot of pitches. What happens in two-strike counts? The answers could prove quite telling of what’s in store for Robbie Ray as he begins his sophomore campaign.