Double Plus: Friday Fun Facts (Or Not) An Attempt at Making Sense of Rubby De La Rosa

Double Plus: Out of the Schedule Woods Atop Mount Five Hundred

Unless you were born on an April 29th, the date probably doesn’t have any special significance to you. It’s not a Major Baseball Event. But it is a nice little D-backs milestone, because as others have raised repeatedly — especially Jeff, on The Pool Shot — the team had a borderline cruel schedule for this month, and yet things are pretty okay right now, right?

Let’s talk it out, but first, I want you to think back. Back, to how the D-backs started the 2014 season. The team had just let the 2013 season slip through their fingers by finishing .500 for the second consecutive year — after leading the NL West by 4.5 games as late as July 7. Hope was borne anew, Mark Trumbo was the signature offseason acquisition, and March revolved around Australia. But things didn’t go so well right out of the gate, and on April 29 of that year, the team moved to 8-22, a horrific .267 winning percentage.

Getting swept by the Dodgers didn’t help, but there were three overlapping culprits to the Great April Disaster two years ago, it seemed.

The fact that the D-backs faced a similar situation to what they saw in 2014 is no coincidence; that’s the unbalanced schedule biting the team in the ass. If you have 17-18 games against all four other teams in your division (as has been the case since 2001), you pretty much have to schedule a lot of those in April and September; otherwise, midseason would seem like it was only intradivision games. But the D-backs have the Dodgers, and the perennial contender Giants, and the dangerous (to them, anyway) Rockies, with only the Padres to show for their troubles.

Through 24 games in 2014, the D-backs were at 6-18, and the season was all but lost. This year, the D-backs weathered a similar storm and survived with a 12-12 record. Small victories, friends. It’s not like it’s all smooth sailing from here, but look how April (with a couple more Rockies games) stacks up against the season’s other months. Each opponent is listed in the month from top to bottom in descending order of projected winning percentage: 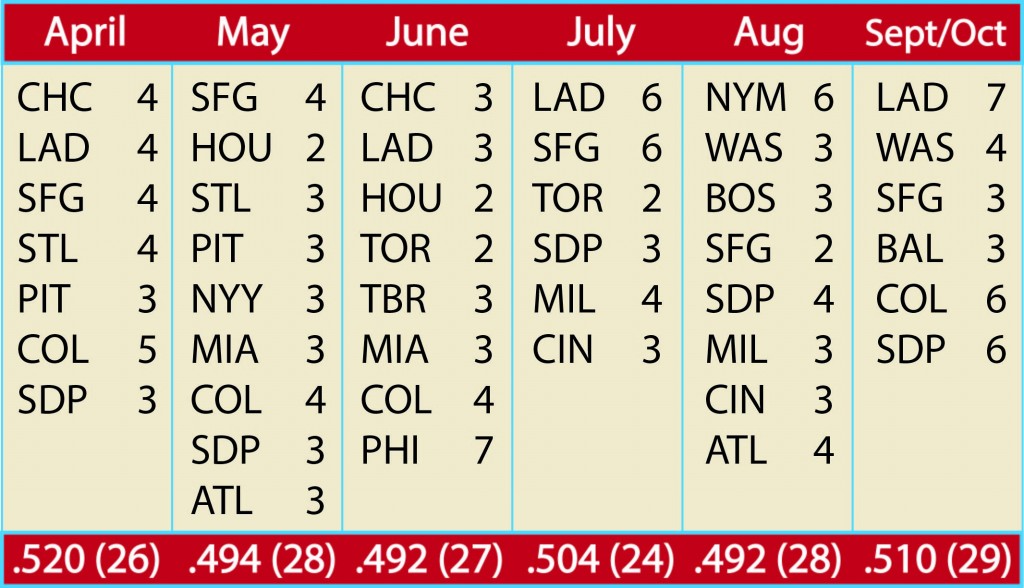 From today until a two game set against the Giants starting on August 30th, the D-backs face teams with an average projected winning percentage of .494 — not too shabby. It’s not a huge advantage (it’s like facing 80-82 quality teams throughout), but it’s a big change from the games to date (which was like facing 85-77 caliber teams for 24 games running). Add in only having one single off day after the season started, and you can start to see the challenges. From here on out, the D-backs have exactly three scheduled off days in each of the last five months, plus the All-Star break in July (that’s a four game break, but the D-backs have an off day the week before, and two the week after). Sure, being on pace to contend would be better. But by riding the carousel of optionable relief help, the D-backs kept themselves in a position to contend with how they handled their schedule to date.

One Response to Double Plus: Out of the Schedule Woods Atop Mount Five Hundred