Has Nick Ahmed Improved at the Plate?

The beginning of the season is such a weird time for all of baseball. There are guys like Jeremy Hazelbaker, who played seven minor league seasons without seeing the majors until this year at the age of 28, hitting .351/.381/.730. There are also guys like Kyle Seager, a multi-time All Star, hitting .119/.245/.238. Our intuition tells us that these things will even out. We’ve all seen enough baseball to know that two and half weeks of performance doesn’t tell us a whole lot most of the time, at least when looking at surface level indicators like the triple-slash lines above. Instead, if we’re seeking clues, we’re best off to examine the process by which these things took place. If the process is the same but the results have been wildly different, we’re inclined to think luck is wreaking havoc. If the process is different and the results are wildly different, well, there might be some causation going on. Emphasis on “might.”

On the latest episode of The Pool Shot, Ryan and I talked about Nick Ahmed helping lead the offensive charge for the Diamondbacks. If you saw that coming, congratulations. There was talk of a new swing and some borrowing of ideas from A.J. Pollock and, if you had to start somewhere, asking Pollock is a pretty good move as he’s always showcased solid bat-to-ball skills going back to his college days at Notre Dame.  There’s also the notion that Ahmed has been a bit of a slow starter at nearly every minor league level, but over time, has adjusted and found comfort before being moved up. He did rake at Reno pretty much right away, but that’s Reno and nearly falls outside of our consideration. Still, you get the point: Ahmed has been actively trying to get better at the dish, and early on, it’s paid off.

Let’s have a quick look at two different events and see if we can characterize any differences in his swing. Here’s Ahmed from a game last summer, going deep against the Nationals. It’s a fastball, center-cut.

And now a game from last week against the Dodgers. Again, fastball right over the plate.

Now, the first clip is against a righty and the second is against a lefty, but both are similar pitches in similar locations with similar results. That’ll have to do. Can you spot the differences? If you said “no,” don’t be alarmed — the difference aren’t stark. He hasn’t vastly altered his stance or added an entirely new timing mechanism. Instead, he holds his hands a touch higher, has a slightly bigger leg kick, coils a bit more now in the load phase and the swing path has a tiny bit more loft. All of that should correlate to Ahmed being able to transfer more power into the baseball.

A look at StatCast data shows us that these tweaks have paid off. The average MLB exit velocity from 2015 through where we stand in 2016 is essentially 92mph. In 2015, Ahmed had 258 tracked batted balls and 83 of them were launched at 93+mph (above average). This equates to 32% of his tracked balls being hit harder than average. Fast forward to 2016 and we see that Ahmed has 33 tracked batted balls and 13 of them have been hit at 93+mph (again, above average). This makes up 39% of his tracked balls in play. Since we know that the harder a ball is put into play, the more likely it is to go for a hit (in general, ignoring launch angle), this 7% increase early in the season helps explain the uptick in batting average a little, but more importantly, explains the uptick in isolated power (2015: .133, 2016: 229).

So, yay! We’ve fully explained why Nick Ahmed has been better, right? As it turns out, not quite. The swing changes are great, but Ahmed did have some pretty significant flaws in his approach last year. He’s a contact-oriented batter by nature and swinging somewhat aggressively is always going to be a part of his game. Choosing when to use that new swing does matter because no swing is so flawless that you can just flail at everything. Nick Ahmed needed to change his approach to some degree and it looks like he has.

In 2015, he had a lot of problems on pitches at or above the top of the strike zone. He swung at them often and either missed or popped them up a lot of the time. Given his line-drive oriented swing and aggressive nature, these pitches caused him trouble. Right-handers in general gave him fits, as well. Through an extremely small sample, it looks as if Ahmed is hunting pitches in different locations this season. Observe his swing rates from 2015 against righties: 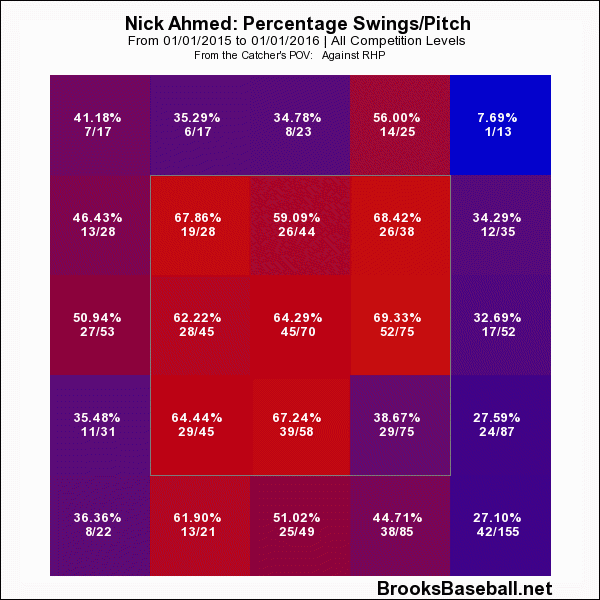 And now his swing rates from 2016 against righties: 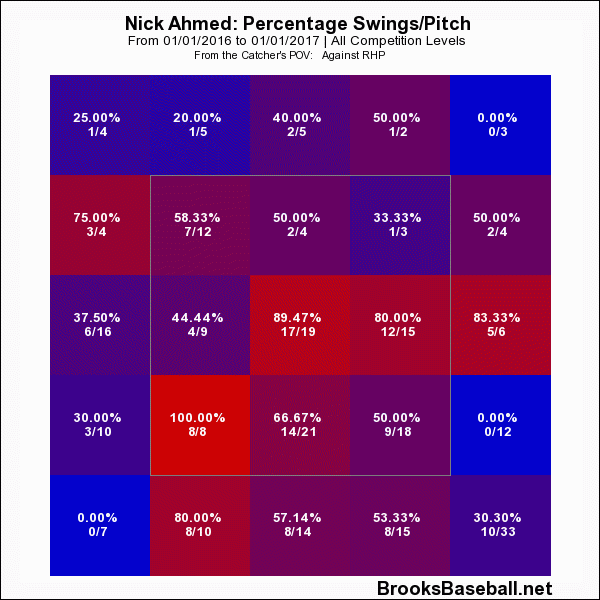 Again, tiny samples here, but notice the top of the zone. His swing rate is down slightly, especially on the pitch that is high and on the outside corner. He’s let a few more high pitches go by in general, which could be a sign of things to come or just a result of how few pitches he’s seen in general. I’m not ready to call it a major change by any means, but perhaps there’s something to this. We’ll have to keep watching to find out.

And if we want to hedge even further into uncomfortably murky waters, we can make one other small observation. Nick Ahmed struggled on inside pitches last year. As is often the case, pitchers threw him stuff away until he proved he could either hit it or lay off. Ahmed did that somewhat well, and pitchers responded by coming inside where he didn’t necessarily have a “hole,” but he did find himself often over-matched. I’m not a big fan of batting average for all of the obvious reasons, but look at how Ahmed hit on the inside part of the plate last year (pay attention to the average more so than the color): 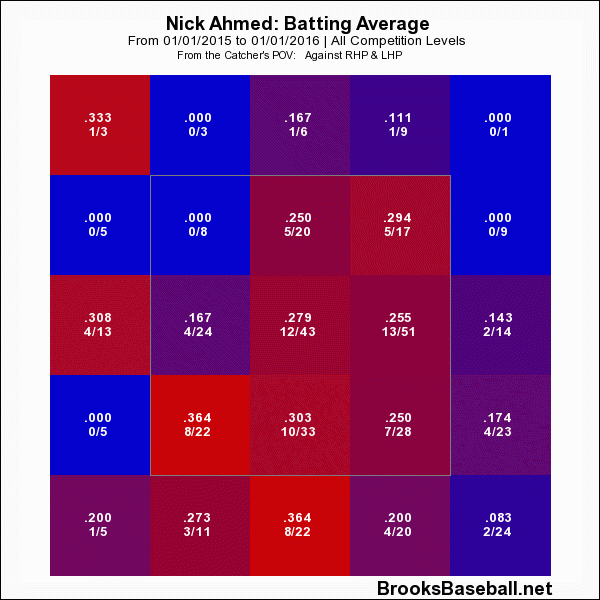 And note how he’s hit on the inside part of the plate this year (again, focus on the average): 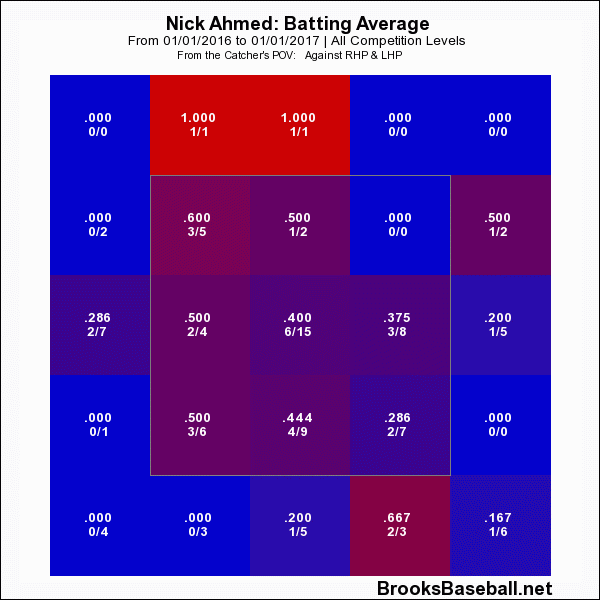 To repeat, I’m not saying Nick Ahmed has mastered the inside pitch and hurlers had better stay out of his wheel house, but the early returns look good. Maybe the new swing is helping him here as he’s staying a bit more compact in the box. Maybe he’s expecting that pitch a bit more and cheating it a little. Maybe this is just luck — it is based on batting average, after all.  I’m not sure what exactly to make of it, mostly because we have such little to work with at this point. We almost have to just sit back and wait for a few more weeks’ worth of data.

There’s just not enough here to say that Nick Ahmed has significantly improved as a hitter. What I will say is that the rise in hard contact is likely tied to him refining his swing some and possibly looking to do damage in different parts of the strike zone. Even batting ninth most nights, he’s getting the same number of pitches in the zone overall as he did last season, so it’s not like they’re now throwing him gourmet meatballs when they were previously throwing him rotten hot dogs. Either luck or some nuanced changes have led to a bit more success. It’s up to us to keep our eyes peeled, continue to observe the process and see if the results continue to fall in Ahmed’s favor. The indicators look positive, but there’s a ton of baseball left to be played before we can really come to any kind of hard conclusion.

6 Responses to Has Nick Ahmed Improved at the Plate?