Prospects to Watch in A+ Visalia and A Kane County Has Nick Ahmed Improved at the Plate?

Once upon a time, Archie Bradley was a top prospect with two plus or better pitches, a developing change and command issues that seemed to be improving. In June 2013, he rose to become Keith Law’s “best pitching prospect,” ahead of a recently-drafted Mark Appel and hit-or-miss types in Taijuan Walker and Dylan Bundy. Nothing was guaranteed, but with a tremendous mid-90s fastball with exploding movement and a curve that had the break of a 12-6 and the velocity of something harder than that — the tools were there. Although Jeff probably rightfully shut me down, there was enough there at the time to wonder if Bradley should finish the 2013 season as a reliever in the majors, as co-draftee Bundy had the year before. Bradley needed better control, and probably additional time to develop as a starter to work on his change as well.

Bradley was so highly regarded because he was one reasonably foreseeable adjustment away from being a dominant pitcher. To the chagrin of his agent, he wasn’t called up in April 2014, despite a pitching apocalypse at the major league level — to try to make that adjustment. We assume he worked on command in the minors, but as Jeff put it, “2014 was a step backwards for Bradley”:

…here’s the problem: Archie’s yet to take a step forward in terms of command. The stuff is big and no one doubts it. That said, he is still learning how to utilize it and his progress has been relatively slow. In 2014, he dealt with injuries and expectations, ultimately finding himself back down in AA after flirting with the big league rotation in Spring Training and getting shelled in AAA. The walks were a constant problem…

As Jeff noted in writing up the AFL that year, Bradley’s command definitely didn’t take a step forward that season, and arguably got worse — perhaps largely because of the injury issues that brought him to the AFL to get innings in the first place. The D-backs had decided to give Bradley a chance to improve command in the minors before giving him a shot, and to the extent injuries derailed that progress in 2014, it seemed reasonable to go back to the same plan in 2015.

Of course, that didn’t happen. Despite publicly flirting with the idea of using Bradley as a reliever to start the season, the D-backs shipped out Trevor Cahill, opening up a rotation spot that Bradley immediately filled. In spring training last year, Bradley was not the guy we knew in 2013; his velocity was down from averaging around 95 mph (Brooks release speed) to averaging around 93 mph (same). He was walking more guys, not fewer. And as the D-backs preached ground balls, Bradley fit a plan that later got Zack Godley a shot in the majors: he pitched low in the zone, relentlessly. As Bradley started the 2015 season, he had impossible-looking box scores in every start, with a truly weird number of hitters either hitting a ground ball or getting walked.

In short: Bradley was pounding one part of the zone, and getting away with it because of tremendous but inconsistent fastball movement. Pitching to a corner meant pitching out of the zone a lot; his fourseam movement really is that inconsistent, as we explored at the time. Pitching to the center of the zone to guarantee a strike when he needed it was also not working.

We’ll never know what would have developed with Bradley last year if he hadn’t been struck in the face with one of the hardest-hit balls on record last season. Maybe he would have gotten healthier, and the fastball would have recovered those lost miles per hour; maybe hitters would have adjusted to his obnoxiously simple approach at the plate, and maybe he would have made another adjustment. That last part — that would have been fascinating. But it’s a moot point now.

And this is the lede I tried not to bury by stuffing it into the title: last year’s Bradley is gone. The Original Bradley is back. Good signs were there last fall, and in San Francisco last night, he had velocity marks that were almost exactly the same as his 2014 AFL work, an average release speed of almost exactly 95 mph and the fastest Bradley pitch captured by PITCHf/x since he threw briefly in the 2013 Futures Game: 97.4 mph at release.

More good news: the curve that was so dominant last year looks exactly the same. Last night, he averaged 7.3 inches of “drop” with it, with an average release speed of 82.8 mph. That’s crazy, friends. In the history of PITCHf/x — 2007 to the present — 343 starting pitchers have thrown at least two hundred curveballs. They’re all big-breakers that are slow, fast versions that don’t break, and quite a few that are slow and don’t move much at all. 79 pitchers averaged more “drop” than Bradley averaged last night. But none of the pitchers who have a curve with more break have averaged more than 80.5 mph in release speed, and that pitcher, Alex Cobb, is the only one of the 79 pitchers to throw it as hard as 80 mph. Bradley is a big-time outlier. They call it a hammer curve for a reason.

I was curious about Bradley’s command last night; you probably were, too, what with his track record and the four walks he tallied in 4.1 innings. We use walk rates as a proxy for control, but we don’t have a great metric for command — that’s a matter of harnessing your pitches and hitting the glove. It’s not perfect, but one thing we can look at is how consistent Bradley was on the movement of his pitches (we’ll come back to location in a second).

The April 16, 2015 start that Bradley made in San Francisco was eerily similar to the game last night, so I pulled that out as a comparison. On the left is the 2015 game; on the right is last night. Red squares are fourseam fastballs, with some blue diamond changeups and the separate field of green triangle curveballs. The plots aren’t the same size, but they are the same scale. So ask yourself: does one have individual pitch types clustered more than the other? Does one have more pitches that didn’t move as much? Those are the command-type questions we can ask, in terms of movement. 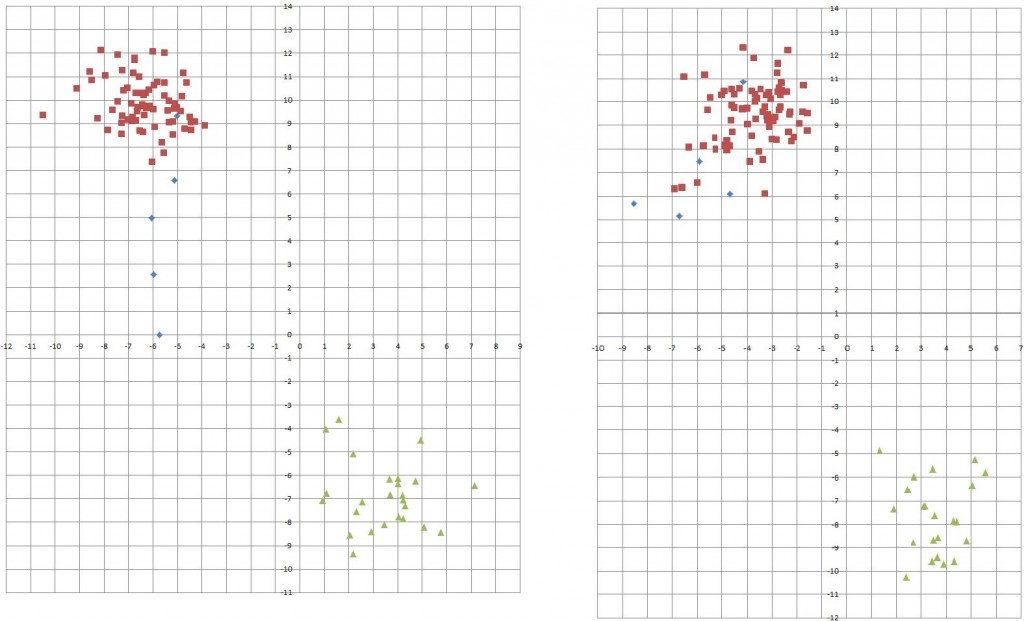 Maybe you would say that there were a handful more fastballs last night that had no “rise,” although the changeups look better, and the curveballs look fine. The 2016 cluster of fastballs on the right also doesn’t have that tremendous arm-side run that stuck out so much a year ago; it’s a little closer to zero. Theoretically, that should make it easier to hit the glove with the fourseam, but the main thing is consistency. By the way: the barrel of the bat is about three inches across, and you only have about an inch of real estate on there (or less) to hit the ball at a vaguely useful launch angle. Good luck sizing up Bradley’s fastball, even if you recognize what it is.

In terms of location — again, to test out command, we’d probably prefer a measurement of how close Bradley was to where his catcher set up his glove. We don’t. But we can still look at pitch location, and what it means about effort; last year, it seemed like Bradley had that “Bradley Zone” down and to his arm side, but that he also had another hot zone in the center of the plate (presumably in hitter counts). Once again, the 2015 start against the Giants on the left, and last night’s game on the right (note: the curve is the same pitch, it’s just that the PITCHf/x algorithm has more categories now):

There’s more evidence of a plan on the left, I guess; there’s a tight cluster down and to the left (Bradley’s arm side) in the 2015 plot, and another in the center. There aren’t many high pitches, either. The 2016 plot is the one that shows a better curveball command, I think; they’re mostly off the plate and down, whereas the 2015 has curveballs dotting the zone all over. Maybe the 2016 plot has a fair number of pitches on the edge of the zone to Bradley’s arm side, but it’s hard to tell.

Where Bradley succeeded last year, he issued walks, but limited hits. He had a very specific pitching plan that he wasn’t able to execute flawlessly, but part of that plan was that when he failed, he’d fail in a way that wouldn’t hurt. Last night, Bradley didn’t limit his hits, but he also didn’t seem to have so inflexible a plan. I don’t know if Bradley’s fastball movement will be enough for hitters to miss even if it’s in the middle of the plate; the Giants didn’t miss yesterday. But if command is to continue to be a problem, that’s the choice he faces: pitch more central in the zone more often, or continue to walk an unconscionable number of hitters. Let’s see if he makes an adjustment his next time out, and if hitters aren’t missing on movement going forward, it may be time to give Tyler Wagner a shot if a starter is needed — and turn Bradley into a bullpen ace.

One Response to Archie Bradley Returns as Originally Advertised