It’s the the third season of team-initiated instant replay in baseball, and it’s becoming old hat. As you’re watching, the announcers remark on how close a particular play was. The manager walks up to the front step of the dugout, looking like he regrets waiting to hold the door open for someone who’s taking way too long to get there. The bench coach gets off the phone and shuffle passes the news from the video room, and the manager challenges the play on the field. It feels like a toss-up; without seeing the play, you might as well flip a coin. And if you’re rooting for a call to be overturned, chances are you feel like you already know it will be, or you don’t feel like you have cause to gripe if the umpires in New York let the call on the field stand.

One reason it’s becoming old hat, though: it’s happening more often. There’s a decent chunk of replays initiated by the umpires on the field, but in terms of those started by teams — in 2014, there were 1052 challenges, but that increased almost 11% to 1166 in 2015. This season, teams have played 379 games, just under 1/6 of the season (15.6%). They’re on a pace to shatter the mark last year — if things stay steady, teams will have made 1519 challenges by the end of the year, an increase of 44% off Year One.

Baseball is so fascinating because it’s a constant combination of strategy and skill. You can have the best game plan, but it’s not going to work every time — and you won’t execute it every time, either. There’s skill involved in successful use of replay, but let’s put that aside to talk about strategy. Because as of this writing, the D-backs are on a pace for 77 challenges, more than double the 33 challenges they leveled in 2015. Part of that is an increase of challenge-able events, for sure — these games have been high-scoring affairs, with lots of plate appearances for both teams. Part of it is not. 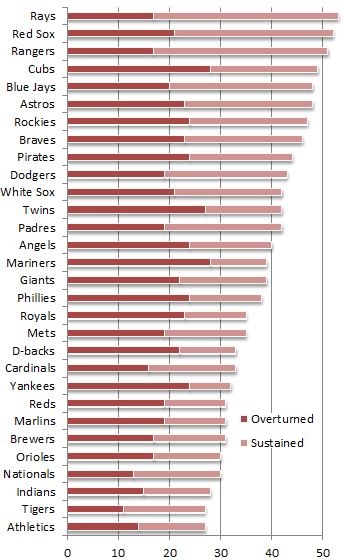 Overthinking it is underthinking it. You want as many plays overturned as possible, but in a strategic sense, there’s something lurking in the back of our minds: the chances that some very obvious replay play will occur after a manager has challenged and lost in the same game. Chances are, in the obvious cases, the umpires may initiate a review of their own accord, anyway. But it’s also a problem we tend to overemphasize. Successful challenges happened for a team on average every 8 or 9 games. If it’s in the first inning? There’s a 12% chance of another one of those plays coming up. And by the time you get to the 6th inning, those chances have dwindled to 4% or 5%.

Yes, it’s not like all of the extra challenges are turning into extra overturned calls at the same rate. But who cares how many challenges you lose? It’s a lot like how a third base coach probably should send a runner home with two outs even if he thinks there’s only a 40% chance of success. If 6 out of 10 runners in those circumstances are called out, the third base coach gets lambasted by fans and the media — but that would be right on target (since the next batter probably has a better than 60% chance of making an out). It’s not about what it looks like to lose, it’s about what it actually means to win.

Unsuccessful challenges are on pace to increase by 226 (32.7%), and successful challenges are only on a pace to increase by 75 (11.2%), but who cares about that first number? As of right now, the D-backs have challenged 12 times and won 6 overturned calls. That 50% success rate is down from the team’s 66.7% rate last year, but there’s no guarantee they’d have all 6 of those overturned calls if they hadn’t increased their challenge rate. Big time kudos to the D-backs. It’s not something that’s going to win or lose the whole season, but by challenging more often, the team is more likely to get more calls their way, which means preventing more runs or scoring more runs — and that does mean better chances to win.