Paul Goldschmidt is (Not) Broken

As a few D-backs fans have noted, one Paul Edward Goldschmidt hasn’t really been himself to kick off the 2016 season. These feelings come from a place of privilege, it should be noted, because Goldy is still a perennial and current top performer in the National League, producing offense at a rate about 40% higher than league average. But this isn’t the Goldy we’re all accustomed seeing. A .239/.424/.489 line (before yesterday’s game in Miami — he went 2-3) would be great for most players, but seems a bit low for America’s First Baseman. So what gives? Is Paul Goldschmidt really struggling?

The easy answer is “no.” Goldschmidt’s .424 on-base percentage is tenth in baseball and his 22.9% walk rate is tops. Paul Goldschmidt is getting on base like nobody’s business. Rather than use his slugging percentage, we can and will do better by looking at his isolated slugging. He sits 26th in the league here and his .250 ISO is essentially identical to the .249 ISO he posted last season. His six home runs are tied for sixth in MLB and the team lead, plus they put him on pace to tie a career high with 36 bombs. Is Paul Goldschmidt getting on base at a prolific rate? Yes. Is Paul Goldschmidt hitting for power? Yes.

But let me guess, the .239 batting average still strikes a cord with you. I mean, there’s a reason for that and it’s primarily because we’re used to seeing a number that starts with a three. It’s also because, no matter how much we try to get ourselves away from valuing batting average, it still permeates our perception of the game. He’s only hitting .239? Oh my goodness, what a slump. Something must be wrong. Before you get defensive, know that I’ve had the same thoughts, only to slap myself (mentally) and try to look at the bigger picture. We’re inundated with batting average on every telecast, website and baseball card. It’s no wonder that’s where our eyes go. We’re conditioned for it.

So let’s ask a different question: what makes batting average, given that’s the only area where Goldy is down? It starts with pitch location. As you’ll see, nothing’s changed. First, where pitchers have thrown to him 2013-2015, the second all 2016. 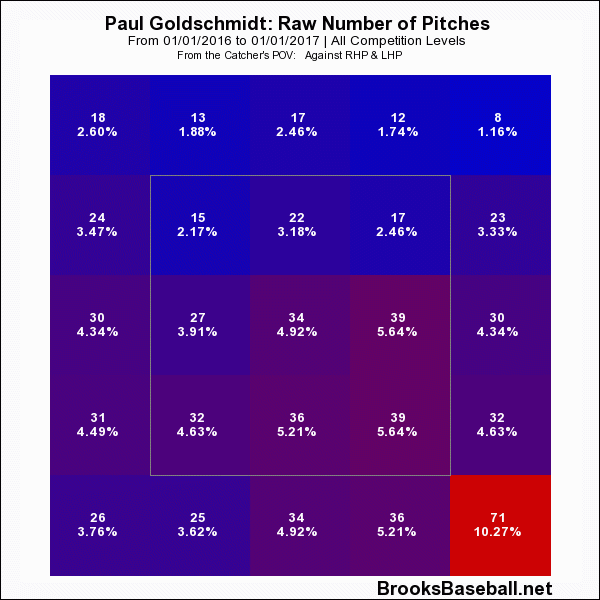 The book is what it’s been — stay low and away from the MVP candidate. Pitchers are doing what they normally do and so far, he’s been taking his walks. Last season, Goldschmidt took 45.1% of pitches in the zone. This year it’s 45.8%. Yeah, things are eerily similar all the way around.

Once the pitch has been thrown, the hitter has to make contact, but again, nothing doing. Goldy’s contact rate is exactly what it was a year ago. Sure, he’s making a little less contact out of the zone, but he’s made up for with more contact in the zone. Luckily, he’s swinging at even fewer pitches out the zone than normal, which is really saying something for a guy with Goldschmidt’s plate discipline. Overall, it’s not like there’s a contact issue — he’s making a normal amount of contact at the plate.

The type of contact matters, though. As we know, line drives are great, but unpredictable and fly balls go for outs more often than ground balls. There’s a little something here. Goldschmidt’s fly ball rate is down six percent while his ground ball rate is up the same amount. It’s counterintuitive, but the way Goldschmidt runs and the way he can drive the ball, the extra grounders are actually a bad thing and the drop in fly balls means fewer opportunities for extra base hits. But this isn’t a drastic change and his line drive rate is in line with his career average. So okay, a few too many grounders, getting on top of a few too many balls. We’re working such a small sample here (about 90 balls in play) that six percent is something like five extra grounders that could have been put in the air. Five balls in play is hardly worth getting worked up about.

Directionally, there’s also been a small shift. Goldy is hitting the ball to left, center and right at rates of 39%, 32% and 29%, respectively. Last year he was incredibly balanced at 30%, 40% and 30%, so this year he’s pulled the ball more. But in 2014, a year in which he was incredible before being derailed by injury, he was spraying the ball from left to right at a 39%, 32%, 29% clip, identical to what he’s done in 2016. So even though there’s a change from 2015 to this season, it’s not like we haven’t seen Goldschmidt tear the cover off the ball with this approach.

But let’s put those last two nuggets together: more grounders and more balls pulled. That sound a lot like “rolling over” on the baseball. A cursory look at his soft, medium and hard-hit rates reveals the smoking gun:

That’s a huge change right there. Paul Goldschmidt is not making Paul Goldschmidt-like contact. Pitchers are doing the same thing, he’s hitting where he’s hit it before, he just hasn’t hit it with the same authority as before. This is clearly an issue.

And when we’ve seen Goldy scuffle, as rare as it is, he seems to be “in between” pitches. He’s fouling a lot of them off, checking his swing, and just looks a bit less sure of himself than he does when he’s raking. Sample sizes make it tough to compare, but he’s fouling a few more pitches off than we’re used to seeing, especially pitches in the zone. Goldy is always a patient hitter who has the ability to work the count, foul off what he doesn’t like and then drive something he does. Right now, he’s doing the first two things and skimping on the latter.

Hard-hit balls go for hits the vast majority of the time. Paul Goldschmidt has been making hard contact less consistently than what we’ve deemed The Gold Standard (how have I never used this awful pun before?). A track record of nearly five years would suggest that he’ll revert back to form and there’s no reason to think he’s injured. The rest of the indicators are holding steady, and so we should resist hitting the panic button. Instead, maybe the pitcher’s he faces in May should be extra-worried, because regression to the mean is bound to occur and April’s pitchers got away with a couple that should have been pounded. Goldy’s .268 BABIP is partly a function of the weaker contact, but also partly bad luck. This is bound to change, and when it does, the opposition would do well to duck and cover.

7 Responses to Paul Goldschmidt is (Not) Broken