Making a Monster: How to Turn Chris Owings Into Paul Goldschmidt

It’s Friday in these parts. Maybe it’s Friday in your parts, too. If it’s not, maybe you wish it was Friday in your parts. Friday’s are great because that’s when the fun is about to begin. And let’s face it, those moments before the fun begins are quite often better than the fun itself. Realities like these are part of the problem with getting older as more perspective isn’t always an asset to a person’s demeanor, leading to life’s frustrations taken out upon the things and people surrounding someone. Kind of like how Paul Goldschmidt reserves all of his anger for hitting baseballs really exceptionally hard. That quality makes him the Diamondbacks’ best player heading into 2017 (again), but wouldn’t it be great if the team had two Paul Goldschmidts? I’m sure they wouldn’t mind that happening. I’m not talking about cloning players like we did with Gerardo Parra that one time, but rather creating another Goldy-like performer from someone already on the roster. Who should that be…?

Chris Owings, obviously. From his days as a prospect, Owings has always had some level of offensive aptitude, generally a level surpassing that of his peers. In the majors, that’s changed to a degree because Owings has a couple of flaws, but it’d be out of line to say he’s not had value. There are some things he does well, even if the hitting component is just okay. For his career, Owings owns a .254/.294/.376 batting line, good for something like 25% below league average. He’s projected to hit .262/.302/.390 next year by way of Steamer and .263/.301/.394 by ZiPS. Those are basically the same thing, but they’re taking a season into account where Owings was still recovering from injury (2015). You could reasonably expect him to perform better and he is entering just his age-25 season. Chris Owings might still be getting better as a hitter even “better” is still pretty unremarkable in the end.

But we’re talking about making Chris Owings very remarkable today. Paul Goldschmidt remarkable. How do we do that? Luckily we have some tools to determine how many runs a player is worth. This is done with the help of linear weights, something you can read more about if you’re so inclined (recommended). Through the use of linear weights, it is possible to assign a standard, average run-scoring value to different events on the baseball field. Take a base on balls? That’s worth half a run. Strikeout? That’ll cost you about a third of a run. Hit a double? That’s worth almost a whole run. And so it goes, with homers and stolen bases and times caught stealing and getting plunked and on and on. (For simplicity’s sake, and this is important, we’re not counting a few items here because that would just make this whole thing more complicated than necessary for what’s intended to be a fun exercise in tomfoolery. Not included in the math today are passed ball, wild pitches, reaching on error, defensive interference, defensive indifference, balks, bunts, sac bunts, pickoffs and grounding into double plays. In fairness, these events make up a small proportion of the events on the baseball field, so we’re not missing out on a lot here.)

The first thing to do is find out how many runs Paul Goldschmidt is worth. To do so, I added up all of the walks, HBP’s, singles, doubles, triples, homers, steals, times caught stealing, strikeouts and regular outs for Goldy over the last three seasons, then normalized them by plate appearance, seeing how often they occurred on average. To find a season’s worth of run production by way of these events, I found how many times we’d expect them to happen over 600 plate appearances, which equates to something like 145 games or roughly a full season taking into account some rest days, bumps and bruises. We’re trying to be reasonable here as we’re turning Chris Owings into Paul Goldschmidt, after all. Here’s what I determined for Goldy based on his last three seasons, per 600 plate appearances: 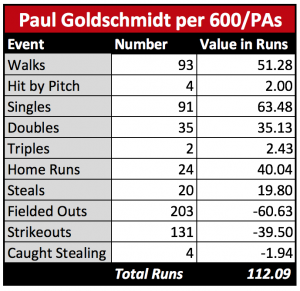 If any of these event totals look low, keep in mind that Goldschmidt often logs more than 600 plate appearances (he had 705 last year). In sum, using our linear weights values, we get 112.09 runs produced by the events we’ve chosen to calculate. So, we have to get Chris Owings to that number, but first, let’s identify where he’s been using the same three-year retrospective. 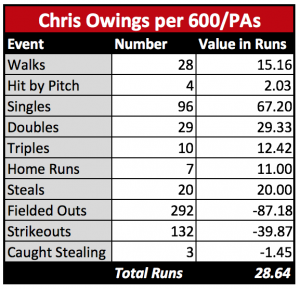 Uhhh… That’s a lot of value to replace. Owings’ offense checks in with just 28.64 runs produced, which is about 83.5 runs below what Goldy is producing. That’s a pretty amazing gap, but perhaps shouldn’t be considering Goldschmidt is one of the game’s best and Owings is your basic role/bench player. Putting our astonishment aside, I set out to create a way for Owings to reach Goldschmidt’s level of production. Thinking about the two players, I didn’t want to just assign all of Goldy’s stats to Owings. That’d be unfair. Instead, I thought about their tools, their skills, their propensities, and set about creating Chris Owingschmidt. Behold. 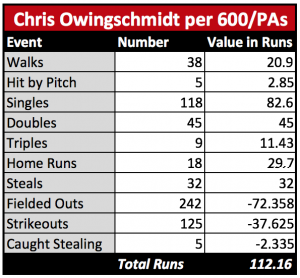 Owings will never walk as much as Goldschmidt, or hit for as much power, but what he can do is hit a large number of singles, avoiding making outs in the process, and upping his power by a level that’s certainly substantial, but also not all that different from what Jean Segura did last season (in fact, I had to tamper down some of the stats based on Segura’s breakout). He’d need to snag some more bases, but getting on base more often in the first place would help as Owings has the speed to swipe. Yeah, he’s getting thrown out a few more times thanks to the extra attempts, and he probably doesn’t cut his strikeout rate much if he’s swinging enough to make this much contact, but the totals above result in something Golden even if it comes in different colored packaging.

Unfortunately, it’s a bit outside the norm. Referencing some aforementioned numbers, this would be, um, an outlier for CO.

That’s pretty close to what Jose Altuve did last year, and he finished third in the AL MVP race, which is really like finishing second because Mike Trout. In fact, over the last three years, only two batters have hit .338 or better over 600 plate appearances or more (D.J. LeMaheiu did it last year and Altuve did it in ’14 and ’16), so perhaps that’s a reason to throw this whole thing out from the start. That would mean more reliance on power output, which doesn’t bode very well. Can he steal 60 bases in a season? Probably not without being thrown out so much that it’s hardly worth it. You get the idea, this is really hard to do. It’s hard to be a singles hitter who doesn’t walk much and produce like you’re a middle of the order masher who’s on track to be a Hall of Fame candidate. You already knew that, though. So while this was all in good fun, it looks like we won’t be saying hello to Chris Owingschmidt anytime soon. And if the real Owings does break out and wins the NL MVP award next year, well, I’m taking some of the credit for laying out the blueprint.

2 Responses to Making a Monster: How to Turn Chris Owings Into Paul Goldschmidt