Early D-backs MiLB Standouts Include Wilson, Duplantier, Lugo, Clarke and More Playing the Long Game: How Can the D-backs Afford to Compete?

Lineout: Is Fernando Rodney This Bad?

Last night was fun. The Diamondbacks punished Jered Weaver just like they should have, launching three homers off the diminished right-hander. But after a late Ryan Schimpf home run, the D-backs’ lead shrunk to the three, resulting in anxiety. Would Torrey Lovullo get Fernando Rodney up? Just the night before, Rodney surrendered five runs on six hits while recording just two outs. It was ugly, and even Tom Wilhelmsen, in to relieve Fernando, retired the only batter he faced via a fly ball that was caught up against the fence with runners on base. As bad as it was, it was close to being worse.

Jake Lamb ended up scoring in the bottom of the eighth on a wild pitch last night, pushing the lead back to four and assuring Diamondbacks fans that Rodney wouldn’t be used. And while Rodney has come under scrutiny, I’ve been at least one voice saying I don’t think he’s been that bad. For the record, he’s not been that good either, but that’s what you get with a 40-year old closer coming off a tough second half of 2016. The bullpen is still the team’s biggest trouble spot, even if they have exceeded some expectations thus far. If you want to look for a quick way to undo the team’s excellent win-loss record, the bullpen is the shortest route (a team BABIP of .344 — highest in baseball over second-place Washington at .323 — falling is the second).

But back to Rodney. What’s the truth? Has he been miserable? Has he been unlucky? All we have are nine innings pitched to work with, but let’s do our best.

First and foremost, his stuff has held steady. His four-seamer is still averaging nearly 96mph. His swinging strike rate (12.7%) is above his career average (11.4%). He’s throwing first pitch strikes nearly three quarters of the time. His strikeout rate is a tick above his career average and his walk rate is a tick below his career average. His changeup is showing about an inch less fade but the fastball is still “rising.” From a raw pitch standpoint, not much has changed, aside from the age-related decline that’s taken hold over the last several years.

When it comes to throwing strikes, he’s hitting the zone as frequently as he’s done in the past. He’s not throwing too many strikes or necessarily catching too much of the plate. His heat maps look like they always have — lots of pitches down and/or off the plate to his arm side. It’s not like he has grooved a bunch of pitches. Instead, hitters have had better than average success on balls at the bottom of the zone or above. Six of the 14 hits he’s allowed have come from the bottom of the zone or below. Take a look at the percentages (ignore the colors for now) of balls put in play that have gone for hits this season compared to the rest of Rodney’s career. 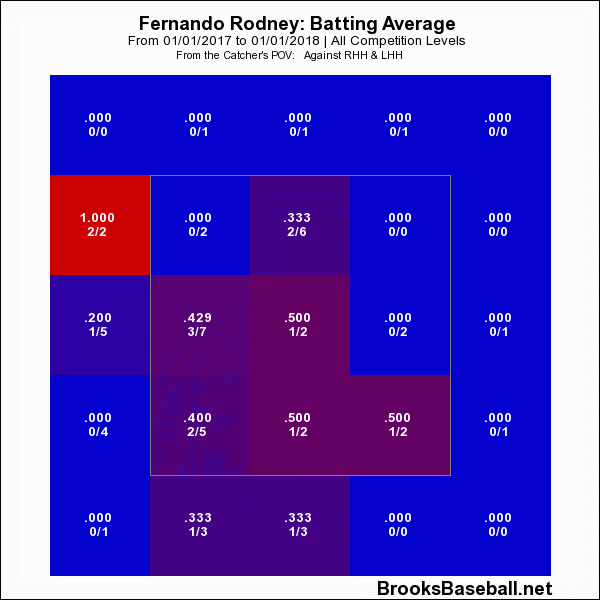 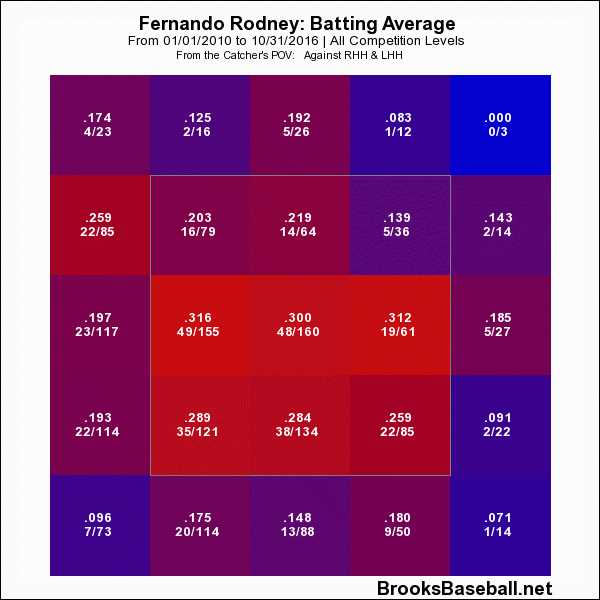 If we look at the three boxes at the bottom of the zone and the three boxes below the zone, we notice something interesting. This season, hitters are 6-15 (.400) in these zones. Prior to this season, hitters have gone 137-592 (.231) in these zones. Considering Rodney isn’t necessarily doing anything different in terms of his location and pitches, this starts to look like a bit of bad luck crammed into a small sample. Since that bad luck usually comes in the ninth, things get magnified — but that’s part of being a closer. He’s not the pitcher he was in his early 30’s, so that plays a role, but this just looks like some bad breaks.

In ten appearances, Rodney’s pitched a scoreless inning six times. He’s allowed one run once, two runs once, three runs once and, of course, he had that five-run ninth on Wednesday night. He’s posted a DRA of 3.38 and cFIP, the best predictor of future success, has him sitting at 96, 4% better than league average. Sure, Rodney’s made some mistakes and so far, hitters haven’t missed. Maybe that’s part of him aging, maybe that’s just bad luck. He doesn’t appear to have changed much and looks like he can remain a reasonable option going forward. The sky isn’t falling, Rodney’s not broken. He’s not a lockdown reliever anymore, but we knew that. The ERA is ugly, but don’t expect it to hold. Fernando Rodney is better than his ERA suggests even if he’s far from elite.

8 Responses to Lineout: Is Fernando Rodney This Bad?