Using RE24 as a Counting Stat for D-backs Relievers Roundup: Roster Shuffling; Anderson and Peralta Dominate; Who Put the Lamb?

Chase Anderson Proves that Change Can Be Good, But Changeups Can Be Better

Things didn’t go so well at the outset of the season, and with playoff chances somehow disappearing in the middle of April before their eyes, the D-backs quickly replaced the struggling Trevor Cahill and Randall Delgado in the rotation. On came the parade of replacements, with the club clearly hoping that something would stick. When Mike Bolsinger had seemingly proven that he wasn’t a solution, the D-backs dug deeper.*

How deep? Deep enough to pluck a 26-year-old pitcher who had struggled so much at Triple-A Reno in 2013 that he was tried as a reliever there, and then demoted to Double-A Mobile before the start of 2014. Reno and the Pacific Coast League are tough, but not tougher than the majors. And make no mistake — this was a leap. Yes, Trevor Cahill was struggling in this, his sixth major league season.

Chase Anderson is older than Cahill. But despite the 2013 fiasco and being ancient by Double-A standards, Anderson must have been pretty enticing in early May; he had a 0.69 ERA through six starts, showing impeccable control (1.38 BB/9), a solid strikeout rate (8.77 K/9), and generally weak contact with only one home run allowed.

So far this season, Anderson’s MLB peripherals are almost identical to those of his terrible 2013, and the fact that he’s had much better results is not necessarily his fault. On some level, though, results speak for themselves. And what Anderson has been so far this season is, quite possibly, the best pitcher on a terrible staff. Here’s what I mean on 2013 (AAA) versus 2014 (MLB):

The numbers make it look, though, like the Anderson we’re seeing might be a mirage. A 4.47 FIP is not particularly good; among all D-backs pitchers with at least 50 innings this year, Anderson’s FIP is 9th out of 9, and it’s not that close.

His ERA, though (3.19), is 2nd-best out of that 9, behind only Brad Ziegler (3.16), whose ERA gets a nice little bump because he gets used mid-inning fairly frequently. So what the hell is going on with Anderson, and who the hell is he?

We have a handy little checklist for figuring out when a player is getting lucky. The difference between Anderson’s FIP and his ERA is what caused us to ask this question in the first place: that’s one pretty big sign, because it means that, typically, a pitcher with Anderson’s walk, strikeout and home run rates fare quite a bit worse than he’s done so far.

League-average BABIP is just a hair under .300 (.298), and Anderson has enjoyed a .286 BABIP so far. That could be a little lucky, but it’s nothing to raise alarms about. But Anderson has been lucky: he’s left 82.1% of runners on base, which is ridiculous. Only superlative strikeout pitchers can outperform the league LOB% consistently, and that’s just not who he is. The league-average 73% left on base percentage is what we should expect for Anderson moving forward. And he’s allowed 97 runners so far in MLB — the LOB% luck cost opposing teams about 9 runs, and 9 runs would raise Anderson’s ERA from 3.19 to 4.30. That 4.47 FIP is all of a sudden looking much more accurate.

But things aren’t as bad as all that. Maybe the best estimate of what Anderson’s ERA should be comes from SIERA, which has him at 3.91. SIERA doesn’t just compute component stats like FIP; it takes into account that not everything is linear. For instance, walking 4 men per 9 innings is not twice as bad as walking 2; it’s much worse than that. With SIERA, we strip out the LOB% but keep things that FIP doesn’t quite capture, like the fact that Anderson’s BB/9 is low enough that it’s not really much more concerning than if it were even lower. You can read more about SIERA at FanGraphs, but it’s kind of the pitching equivalent of wRC+, which is kind of a “house stat” here at Inside the ‘Zona. Embrace it!

So is Anderson’s success a mirage? It’s exaggerated, but it’s not fake. A 3.91 ERA pitcher would still be a pretty good pitcher, especially for a staff as thin as that of the D-backs.

Back in June, RG examined Chase Anderson’s repertoire, explaining how Anderson had had success in some ways, but not in others, and how he might do better by throwing more sinkers. I won’t re-tread that ground, but a new trend has emerged that I wanted to share. Before that, briefly: Chase Anderson is a true four-pitch pitcher. One can’t throw each of four pitches more than 25% of the time, but his least-frequently-thrown pitch, the curveball, has still been thrown 18.6% of the time so far this year. Anderson appears to be keeping batters guessing, and that may be a big part of his success. More on that in a minute, but first, a look at Anderson’s pitch mix: 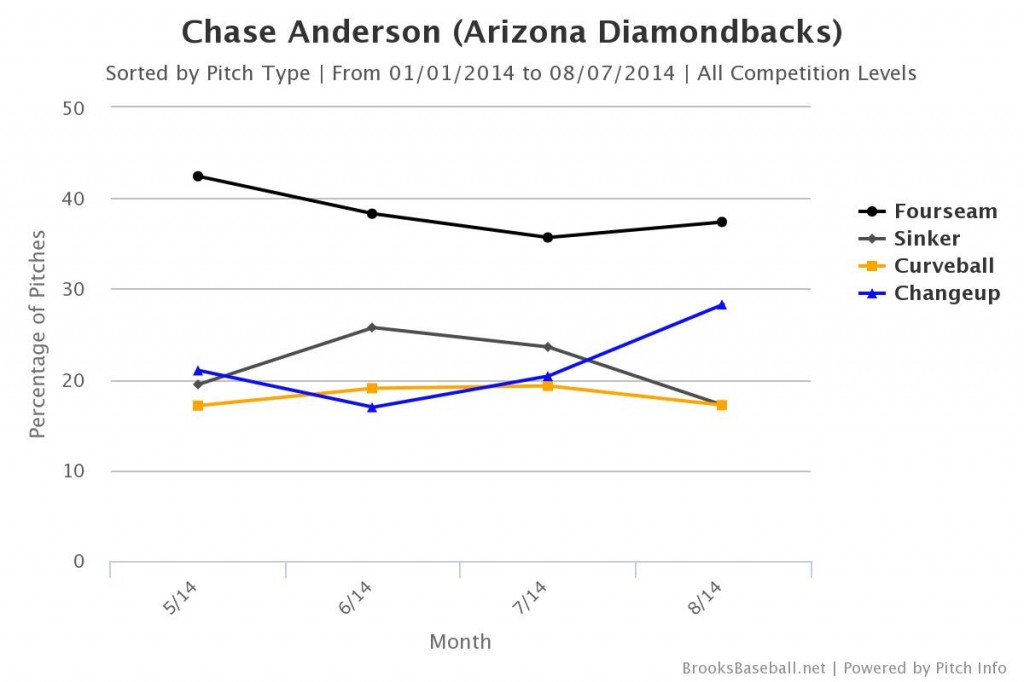 When we last checked in on Anderson, RG made a great pitch to Anderson to start using his sinker more. RG’s advice still holds; the sinker is still killing it, and going sinker instead of fourseam more often could be a key to unlocking a new gear for Anderson. Anderson did make a small change, but a different one. Sorry to dump two more charts on you in quick succession, but take a look at these; first is whiff rate on each of the four pitches, and the other is slugging against. A strong, new trend has emerged more recently. 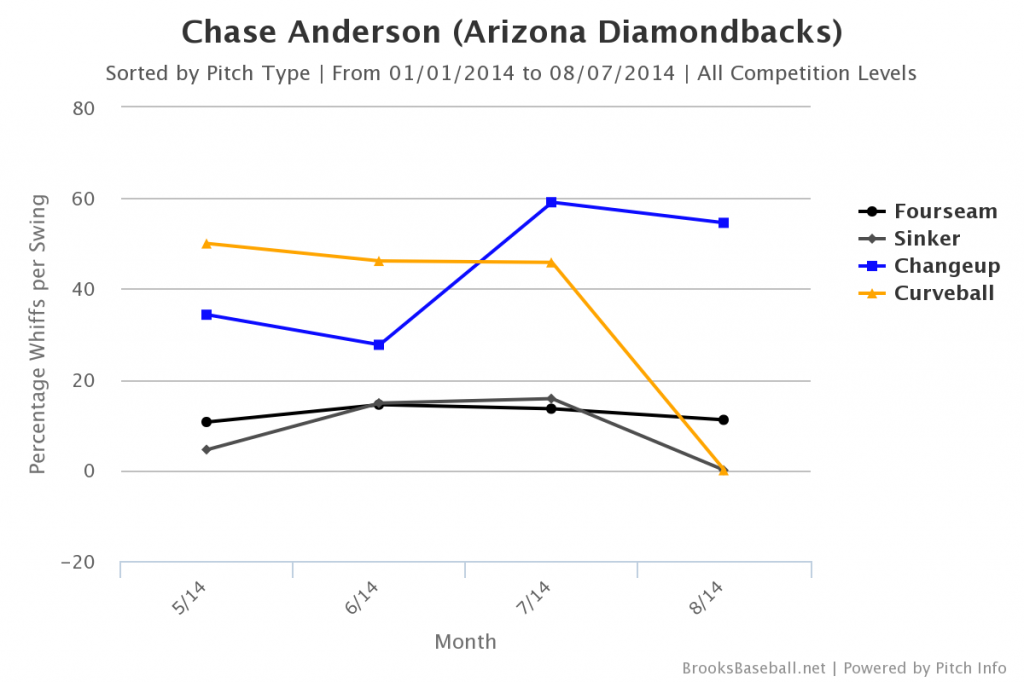 So that was whiff rate. This is slugging against. Focus on July: 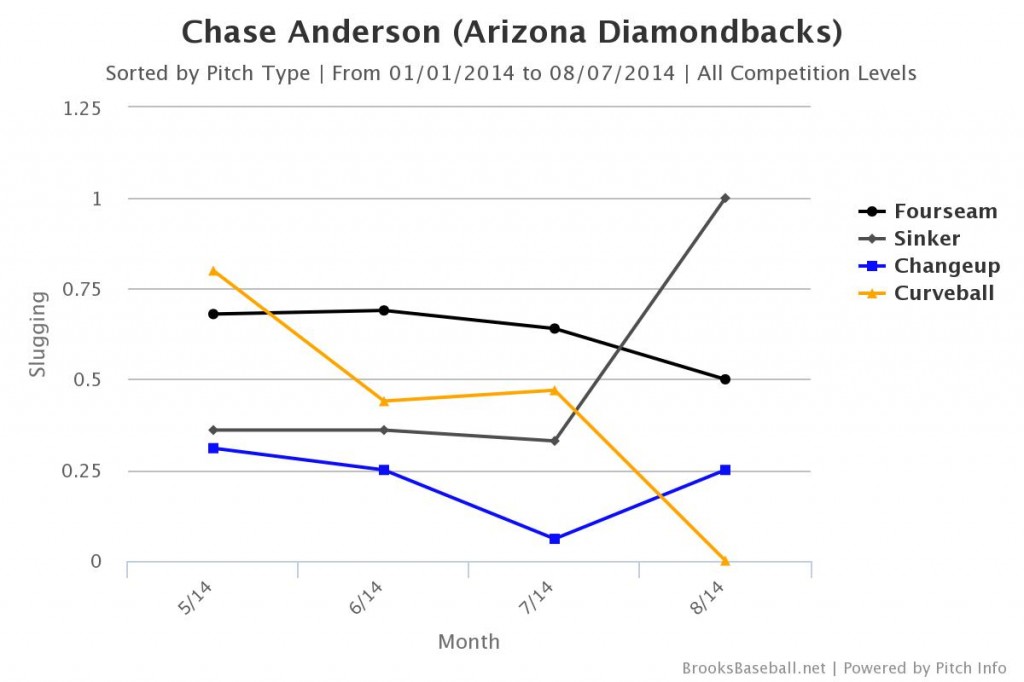 In July, slightly more sinkers, slightly better results. As RG noted, part of that the sinker’s success against right-handed batters, which is something Anderson wasn’t doing particularly well at that point.

Anderson still throws his fourseam fastball more than any other pitch. He works off of that. And it’s terrible.

FanGraphs has “Pitch Values” and “PITCHf/x Values” for every pitcher’s pitches. To better compare every kind of measurable baseball skill, we like communicating statistics like this in terms of runs or wins. And both of these statistics are communicated in runs units. Both statistics agree: Anderson’s fastball, in just 73.1 innings of throwing it, is more than ten runs below average.  Turned into a “per 100 pitches” stat, Anderson’s fastball is worth nearly 2 runs less than the average fastball (-1.86 wFA/C). That is incredible; it means that if Anderson were to throw a 100-pitch start and throw only fastballs, based on the past success he’s “enjoyed” with the fastball, he’d give up 2 runs more than the average pitcher. Since the average pitcher gives up more than 4.5 runs per 9 innings (that’s what league average ERA is, roughly), we can guess that if Anderson threw a 100-pitch fastball start, he’d give up, on average, about 6 runs. No MLB pitcher is that bad.

Of course, no pitcher throws only their worst pitch — and you can probably see now why Anderson is a 4-pitch pitcher. And the good news is that Anderson has a touch of greatness about him.

In the first two charts above, you can see that Anderson has started to throw his changeup more (first chart), back up over 20% of the time. He also had extraordinary success with it in July, with hitters who swung at the changeup completely missing it nearly 60% of the time (second chart). This entire year, hitters have slugged just .212 against the changeup (third chart), which is like saying that hitters only get one base per 5 AB. Remember those pitch value stats from a moment ago? PITCHf/x Pitch Values has Anderson’s changeup worth more than 8 runs above average, which is stunning in that Anderson has only thrown it 239 times. The per-100 stat has the changeup worth 3.5 runs better than the average changeup. That’s like saying that if Anderson threw only changeups in a 100-pitch start, he’d give up, on average, only about half a run.

Against Anderson’s fastball, every hitter is a god. Against Anderson’s changeup, every hitter hits like Bronson Arroyo. These two things are most assuredly related, as you’ve probably also guessed. And in reality, if Anderson threw only fastballs, he’d be punished even worse than 6 runs per 100-pitch start, because hitters would sit on it; that stat already includes whatever value Anderson has garnered from keeping hitters guessing. Conversely, if Anderson threw only changeups, there’s a pretty big chance he’d get punished on those, too. It’s really encouraging that Anderson has slightly ramped up his changeup usage, and that its success didn’t diminish. It would not be ridiculous if, in this lost season, the D-backs experimented with Anderson throwing it even more.

Put it this way: Anderson’s no-movement, 91-mph fastball is a very spicy meatball for opposing batters. They could eat those meatballs for days. But Anderson’s changeup is so good that it also looks like it’s slathered in marinara sauce.

Of 92 qualified pitchers this season, only 7 have a changeup runs-per-100 of better than 2. R.A. Dickey leads the pack at 3.28, Felix Hernandez is second at 2.83. If Anderson were qualified, he’d slot in first with his 3.50, and third place would be miles away. As we saw before, Anderson is probably not a great pitcher, but more of a fairly good one, a 3.90 ERA type. But Anderson does have a touch of greatness about him, and that can be great to watch, too.

11 Responses to Chase Anderson Proves that Change Can Be Good, But Changeups Can Be Better