According to Western Civilization’s finest accomplishment—Wikipedia—Abraham Maslow considered a “self-actualizer” to be “a person who is living creatively and fully using his or her potentials.” The idea of potentials is easy to conceptualize in our beautiful game of baseball, maybe especially for pitchers: getting as many outs as possible, pitching as deep into games as possible, winning the maximum number of games. Two years ago, I’m not sure too many people would have pegged Chase Anderson‘s potential where his success has been. It certainly seems like he could be a self-actualizer, after the success he’s had more recently after a rocky late June and early July.

You follow the Diamondbacks, so you know the nature of the problem: last year, Anderson came up throwing a four-seam fastball that might have looked fringe-average for a lefty, but from a right arm it looked more like it’s served with spaghetti and marinara. Per the PITCHf/x pitch values at FanGraphs, Anderson’s fastball was worth -1.38 runs per 100 thrown, as compared to the average MLB fastball. Had he ranked among the 87 qualified starters last year that threw four-seams (Kyle Kendrick does not), he would have ranked 86th, or third-worst. But as limited as his success was with the pitch, it seemed almost limitless with the changeup; 1.85 runs per 100 thrown would have tied him with Stephen Strasburg for 8th on the same list.

One can only throw a changeup so often, though. Last year, we thought the gap between the pitches was so great that Anderson could potentially throw the change more often and still end up with better results, even if the changeup itself wasn’t quite as successful. It’s a self-actualization question, through and through. With an iffy four-seam, great change, usable curveball and a blank canvas, what is Anderson’s potential, and how does he actualize it?

Again from Wikipedia, some of the characteristics of self-actualizing persons, according to Maslow:

In spring training, Anderson was working on making the sinker a more pronounced part of his arsenal. In 2014, he had let up a whopping 16 home runs in his 114.1 innings, averaging nearly one per (short) start. That’s nearly Rubby De La Rosa-esque. Three were on curveballs that may have been hanging; four were on changeups when the batter appeared to guess right. But just one was on his sinker, which he had thrown 21% of the time, even more often than the changeup. The four-seam was the culprit with eight home runs. Adding the sinker, Anderson noted at the time, was an attempt to limit the gopherballs.

Anderson centered on the task. None of his 21 starts last year were without earned runs, but eight involved just one earned run, another six starts with just two earned. The other seven starts, not so good. Put them in three categories: great, decent and not so good.

Not a whole lot of signal here, right? No clear pattern, the only even thin conclusion being that fewer curves might be a good idea. Still, the idea that a sinker would be harder to hit out of the park makes a ton of intuitive sense, and whether or not it was driven by the coaching staff, it certainly made Anderson look like a self-actualizer, based on the characteristics above. That he was homer-prone, Anderson was sensitive to — instead of stubbornly insisting that the problem was one of luck, he embraced reality and committed to change. I’m not sure we would all do the same thing in the same circumstances. After all, Anderson did have success last year after his career seemed to stall out in 2013 somewhere between Mobile and Reno. Whatever he was doing last year was worth more than nothing.

So Anderson set out to improve anyway, with an increased sinker reliance. It didn’t really show up in his April, but Anderson hammered away with that sinker a quarter of the time between May and July. 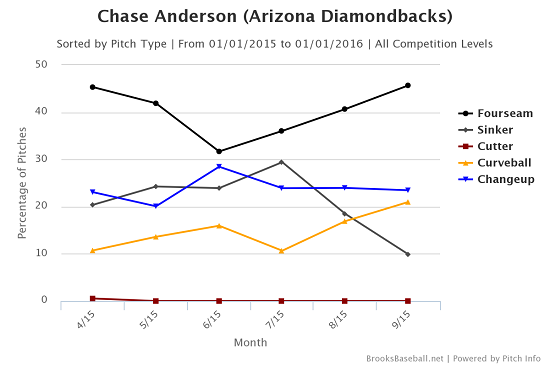 Pretty big drop in four-seam usage. As Anderson’s home run rate didn’t meet his expectations, he doubled down on the sinker approach, it seems. That didn’t work out so well. Although he’d given up just one home run on sinkers last season in about the same number of innings as he had through the All-Star break this season, at that point Anderson had given up 12 home runs — 4 of them on the sinker. There’s very little disagreement between Brooks Baseball/Pitch Info and the PITCHf/x algorithm in classifying Anderson’s fastballs, but Brooks actually had it at 5 sinkers turned into home runs.

In those last six starts, Anderson has still given up three long balls — but none on the sinker (two on four-seam, one on the change). And my impression from the broadcast was that Nolan Arenado probably would have hit that last one at Coors Field last night even if Anderson had fired the ball out of an actual cannon, so, ¯_(ツ)_/¯.

The D-backs staff has preached ground balls so incessantly this year, and the sinker hoopla had to be a part of that. But Anderson went his own way.

So you tell me: is Chase Anderson self-actualized? He doesn’t need to be a god-like pitcher to be the best version of himself. And if he can keep this up — there’s a place for that next year.

One Response to Chase Anderson Finds Himself