Coming into this season, Rubby De La Rosa was heavily reliant on his four-seam fastball, adding a few sinkers in 2014 but really only using a slider and a change to break up the fastball monotony. Both of those secondary pitches tend to be the kind that you can only get away with throwing about 20% of the time, each; Patrick Corbin has been something of an outlier throwing his slider 25% of the time, and although Chase Anderson might have the most compelling case in recent memory to cross the 20% changeup threshold, he’s done so only barely. If you’re doing the math at home, that would leave about 60% four-seams for RDLR, and what with plate appearances offering more balls than strikes, if a hitter is able to sit on the fastball like that, maybe good things aren’t likely to happen.

But RDLR hadn’t really bumped up against those thresholds, at least with the slider, which he threw just 12.4% of the time in 2014. As Jeff has observed, there might be a good reason for that: the slider wasn’t all that good. RDLR threw 216 sliders in 2014, and hitters slugged .674 off the pitch, “better than Goldy” territory. Last season wasn’t a full big league season for De La Rosa, but at 101.2 IP, there’s still plenty of data there. And so here’s the puzzle: check out slugging percentage against on the three pitches he’s thrown most.

A slugging percentage against in the low .400s is not much to write home about overall, but for a four-seam fastball, it’s well above average. On sinkers, you look for numbers just a bit better. On secondary pitches, however, if it’s not in the .300s or lower, it’s not much of an asset. In 2014, RDLR combined troubling slider results with very solid results on the four-seam and a kind of fringe-average success with the change. In 2015, the four-seam took a very real step forward (consider that he’s thrown 1,130 of them already this season), and the slider has played like a plus pitch — but the change has been completely punished. RDLR has thrown 19.6% changeups in 2015, 499 total — and 32.2% of his home runs allowed (10 of 31) have come on the pitch. Looking at some of the same numbers a little differently:

RDLR is tied for most home runs allowed this season, with former D-backs great Dan Haren — at 31 HR, they’re both ahead of a three-way tie at 29 HR between Anibal Sanchez, former D-backs great (stretch?) Ian Kennedy, and truly not a D-backs pitcher in tonight’s starter against the D-backs, James Shields. Based on general run values for events, if you replaced 10 of RDLR’s home runs with an assortment of outs, he’d have an ERA more like 3.91 than his current 4.75.

If home runs have been RDLR’s undoing this season, it stands to reason that we ought to focus our attention on his change and sinker. As Jeff explored a couple months back, RDLR has thrown his change and sinker much more against lefties, and the lack of success with those pitches is closely intertwined with his splits, which have continued to be poor. RDLR has a stellar .209/.260/.350 line against RHH, and a horrific .318/.380/.581 line against LHH.

An adjustment was made to help handle lefties: RDLR backed away from the sinker and change against them, and started throwing his slider more. A lot more. Toward the beginning of the season, RDLR’s slider usage was in line with that 12.3% figure from 2014: 14.2%, 13.0%, 24.2% and 18.3% in the season’s first four months. That catapulted to 32.2% in August, and so far in September, it’s stayed right up there, at 29.6%. And while he is throwing it more often against RHH (that little spike in June to 24.2% comes from throwing it 41.6% of the time against RHH), that increase comes largely from throwing it more often to LHH. 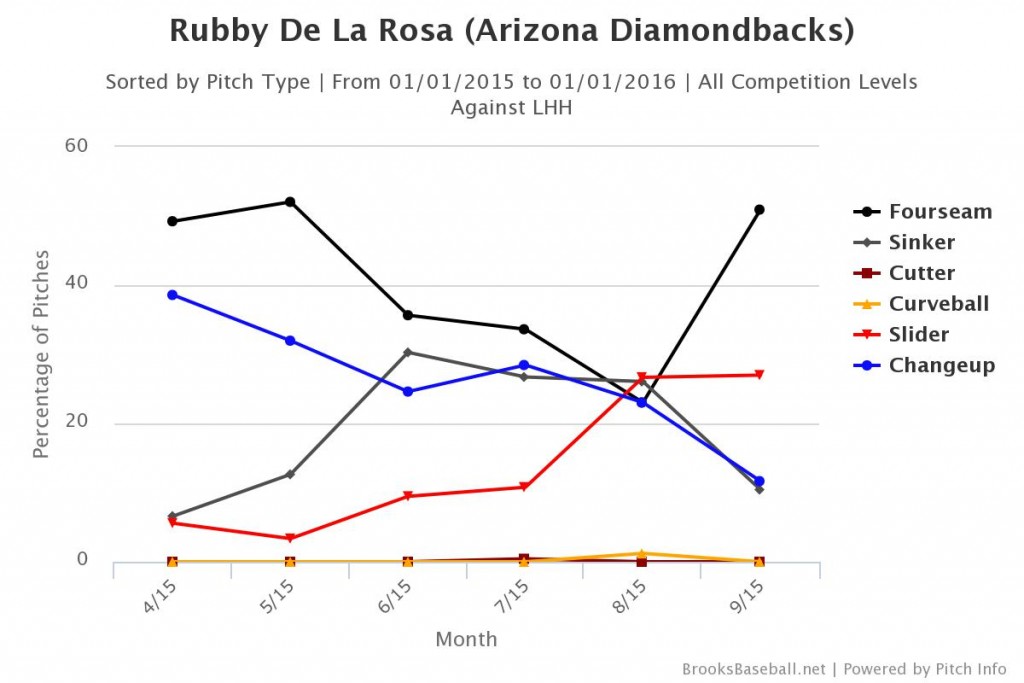 Definitely go back and look at Jeff’s Bad/Good Rubby post from the end of June for why this last graph is so interesting — but those slider percentages are the main part of the story. And while slugging stats on individual pitches just against lefties in single months is… not much to hang our hat on, it’s worth noting that in August, lefties did some damage on the slider but nothing major, and his results on the change did improve (but regressed quite a bit in September). Improved results against lefties in August help explain why it was his best month with Arizona (3.90 ERA), but as things have deteriorated again in three starts in September, the jury is still out on whether the adjustment has long-term promise.

De La Rosa may not be long for the rotation; he’s already surpassed his 2014 innings total by about 13 innings, and while he has faced fewer batters per inning this season, outings like his 6 ER, 2+ inning performance on Saturday probably shouldn’t count only a third as much as a 6-inning outing. Indeed, the D-backs may skip RDLR’s next turn, according to reports. With maybe just two starts to go in 2015, then, maybe we can start to make some broader conclusions of what we’ve seen from him.

On that last point, De La Rosa has thrown at least a handful of beautiful changeups this year — and yet both RHH and LHH have completely torched it this season, and it’s probably worth going back to the drawing board with the pitch. To this point, De La Rosa’s history is not all that different from Dave Stewart‘s — and a splitter could be an intriguing option, if RDLR has the fingers for it.

As RDLR has enjoyed limited success with the change, the sinker has been even worse: .327 AVG against, .600 SLG. I came into this with prejudice against RDLR’s sinker, as it is part of a growing body of evidence that the D-backs have had more failure than success in getting their starting pitchers to adopt one (more on that soon). Maybe throwing one has made RDLR’s four-seam better, but if so the difference has been slight. RDLR didn’t really throw a sinker before, and could probably live without one. With a whiff rate on the sinker that has declined from 16.67% of swings in April to 4.55% in September in an almost straight line, there seems to be a better chance that RDLR’s sinker results in 2016 would be even worse, and almost definitely not as bad as whatever he threw instead.

But there’s a silver lining to RDLR’s trial-but-mostly-error 2015 season (a sinker lining?). Sure, overall the sinker has been awful — but as Jeff pointed out, he was both 1) throwing it much more to lefties and 2) seeing lefties handle it easily. Only 123 of RDLR’s 388 sinkers this year have been against RHH, and while it was just this month, only one of those 123 sinkers against RHH have been deposited over the fence (OMG NOLAN ARENADO IS SO GOOD).

Simply put: lefties have managed a .760 slugging percentage against RDLR’s sinker in 265 pitches, but even with the recent home run, right-handed hitters have slugged just .194. Sure, that’s so ridiculously low that it’s not sustainable, but that’s kind of the point: even if it regressed toward the mean, there’s a ton of room beyond “ridiculously low” that still could land the pitch in “well above average” territory. We’re gathering information here, and that’s one bit worth keeping.

5. Rubby’s sinker has some promise against RHH.

RDLR’s slider may or may not be at least functional as a secondary pitch against lefties, and RDLR will probably always maintain a healthy platoon split. We should have little doubt that he could be as dominant against RHH in a relief role as Andrew Chafin has been against LHH — with vulnerability to LHH an open question. “Tied for first in the majors in home runs allowed” is not typically synonymous with “promising closer candidate” but if in that role RDLR were to shelve the change completely and never throw sinkers to lefties… maybe we shouldn’t rule it out.

It’s a little odd that with almost a full season behind him, RDLR probably has done nothing to increase or decrease his stock with the D-backs Powers That Be. He’s now shown that he can maintain an average fastball release speed above 95 mph over a full season, but just like last offseason, there seems to be no promising roadmap to get through a lineup with secondary stuff. The good thing about guys with tools like this is that they can be just one adjustment away from above average (the splitter thing might be a good idea). At this point, though, he’s at least that far away.