Look, the Diamondbacks need a shot in the arm from the pitching staff. While a lot of the offseason talk is sure to focus on which starter the team can sign or trade for, they’ll still need help from within. And a man, now somewhat forgotten in this post-hype world, who may provide that boost is Archie Bradley. You know, the former top prospect? Tell me you’ve heard of him. He’s just 23 and has, presumably, a lot of development left. We’re starting to catch a glimpse of that development with reports out of Instructs, the somewhat-informal fall league for a bevy of prospects.

Bradley finds himself there with a whole host of lesser names thanks to time missed in 2015 due to injuries: a fractured face and shoulder issues. To make up some of those innings, Bradley was assigned to Instructs so the team can, a) build up his workload, and b) make adjustments to the mechanics that may have led to his wildness. Control has long been Bradley’s bugaboo, and with some new insights via Nick Piecoro, it appears that he’s made some adjustments. Here’s Bradley from early in the season. Notice the full windup:

Now if there’s one thing to take away, it’s that there’s plenty of movement in his mechanics. We have the pitter-patter to get his feet set, the high leg kick, the arm motion, the trunk rotation, then the unleashing of the pitch. Those things have to work in perfect unison, every time, for him to be effective. Some pitchers love working from the windup as the rhythm helps them find a groove. But for others, a more simplified delivery means fewer moving parts and less to screw up (KISS). In Archie’s case, he wasn’t entirely consistent in his eight starts last season. 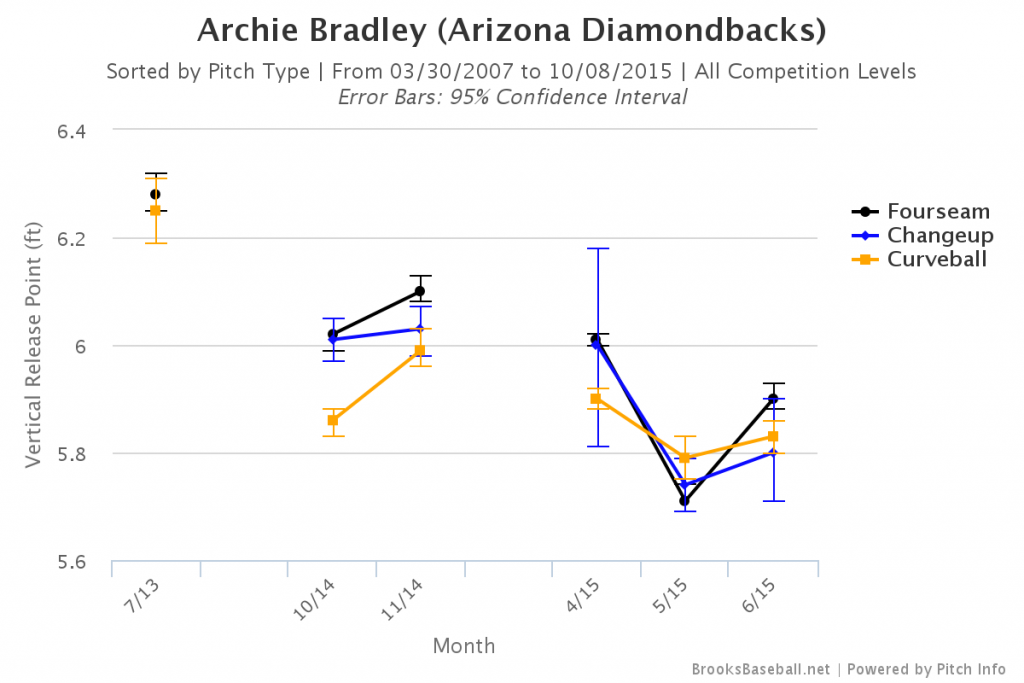 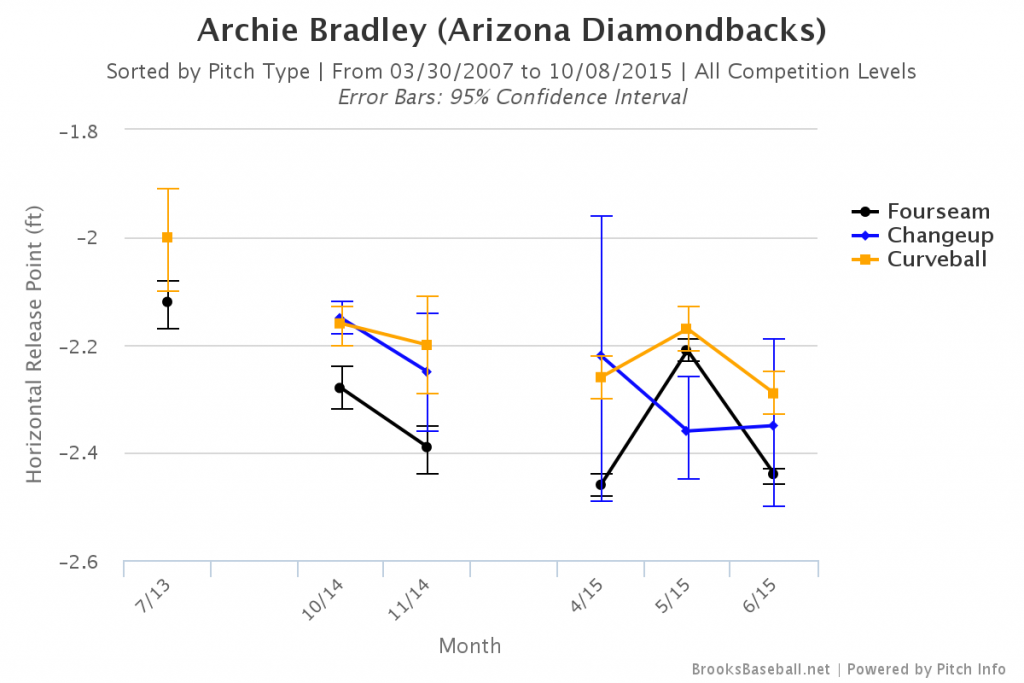 Perhaps the new, more simplified, “half-windup” that Piecoro talks about will help him iron out some of the problems. Like a hitter simplifying a swing, it may come at some small expense, but consistency is critical in baseball.

As I discussed last week, Bradley could also see a large benefit from reintroducing his cutter/slider, a pitch that drew rave reviews in the fall of 2014 when he was in the AFL. When Bradley debuted in Spring Training, then in the majors, the pitch was no where to be found. I, like many others, was befuddled. The organization clearly didn’t want him throwing the pitch – that or he’d lost so much faith in it, seemingly overnight, that he never ever threw it again. With a changeup that didn’t do anything well, this left Bradley with two pitches – a fastball with tremendous are-side run and a curve that could be effective at times. Now, it appears, the cutter/slider is back, according to Piecoro. Add in the notes that he’s throwing in the mid 90’s again and you get the feeling that we might just be in for a much different, potentially improved, Archie Bradley.

It’s easy to forget a player who’s hype is all but gone and hasn’t played (remember Jurickson Profar?). But still in his early 20’s with five more years of club control to come, Bradley is far from a finished product. And when we consider the changes being made and the desperate need for improvement in the pitching staff, he might be just the ticket. Or not. There’s so much we don’t know. But the signs are all pointing in the right direction for now and we’ll have to wait until March to know how much progress has been made. Should he take a demonstrable step forward, the D-backs could be in for a great surprise, one they need badly.

3 Responses to Double Plus: Archie Bradley Making Strides in Instructs