Chase Field is not exactly hospitable for pitchers, but compared to Chase, the Coors Field accommodations are about as nice as an O.co Coliseum clubhouse. Yet from his first MLB game in 2009 through the end of the 2014 season, Jhoulys Chacin managed to pitch to a 3.78 ERA over 672 innings — despite a FIP of 4.03. A SIERA of 4.25 over that same span also suggests that Chacin should have been worse, not better. That’s a long period of time for fooling ERA estimators, and the fact he did so with the odds stacked against him is all the more strange.

But Chacin would have looked even better if I hadn’t included his 5.40 ERA performance in 2014, when he made just 11 starts. The Rockies aren’t in a position to be choosy with pitchers in general, and since Chacin had seemed to catch lightning in a bottle for the three prior seasons, they made a deal to keep him out of arbitration with a $5.5M deal. Great! Only, as Zach Buchanan reported a few weeks ago, the Rockies didn’t actually pay him that. It’s a rule obscure enough that I had never run into it before, and I fancy myself kind of knowledgeable about this stuff: the Rockies were able to cut him early in the season despite the negotiated salary (earlier than a quarter of the way in), and were able to pay Chacin just $1.36M or so of that figure. Live and learn (and take advantage?).

Chacin has presumably made a bit more than $1.36M in 2015 (he earned a prorated league minimum salary for his time on the D-backs Active Roster, at least), but not a lot more. That explains why in the recently-released MLBTR arbitration projections, Chacin looks to be in line for a salary of $1.8M or so next season — assuming the D-backs tender him a contract. And that’s not such an easy proposition, as Buchanan explored in that piece.

On Wednesday when looking at Josh Collmenter‘s return to greatness, I referenced a point about how declining velocity has a lower ERA “price” for pitchers whose heat was already more of a simmer. I reference my recent reference to it now because: 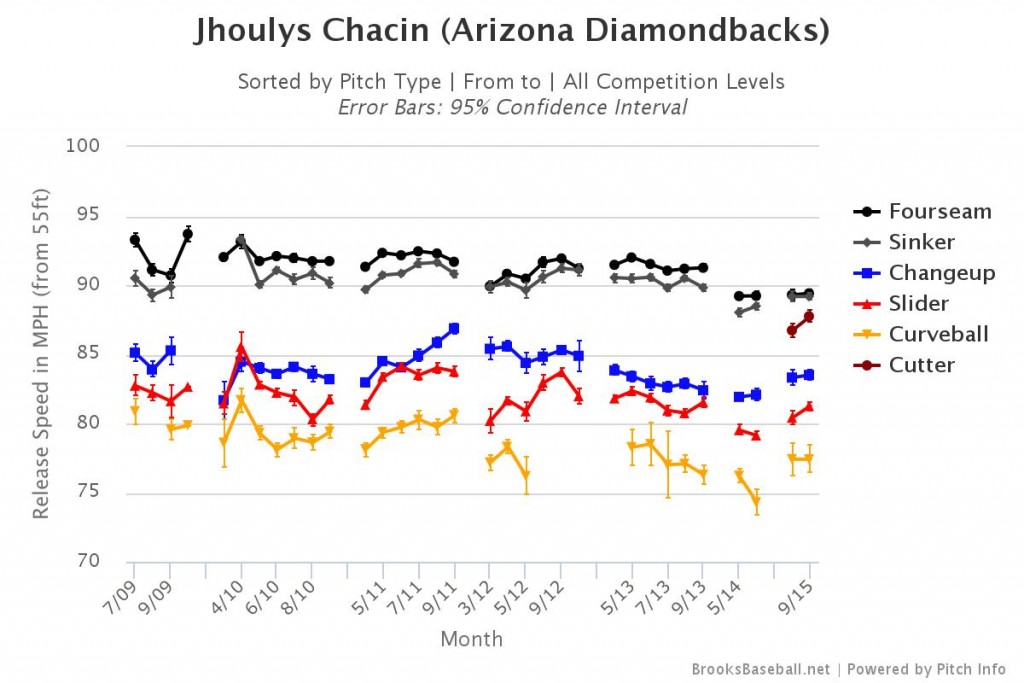 Sad trombone. Chacin hurt his shoulder in 2014, and his resurgence hasn’t been about reclaiming lost velocity. Five games is a super-small sample, but despite Chacin’s past history in beating ERA estimators, it may be that Chacin’s 4.63 FIP or 4.28 SIERA are better indications of how he’s likely to pitch in 2016 than his 3.38 ERA. Chacin tuned up Triple-A hitting in yet another inhospitable environment in Reno (where he also beat a 3.81 FIP with a 3.22 ERA), but it could be that snapping hitters’ brains at that level doesn’t translate to the majors quite as well as other skills.

Or does it? We’re just off of the Collmenter piece, and like Collmenter, Chacin isn’t going to be throwing 90 mph+ anytime soon. It’s time for a new normal for Chacin. And… well, Collmenter manages to miss bats. Can Chacin? If that were a skill he already had, it would show up almost exactly this way, with ERAs consistently below the estimators. In Chacin’s very last game this year, we saw something new, something we would oh-so-desperately want to track for a longer time, and something we’ll be quick to revisit if he does in fact pitch with the team next year. That new thing, only in his single appearance in (long) relief: pretending to be Josh Collmenter.

Chacin threw each of six different pitches in all of his D-backs appearances this year, but according to Brooks Baseball and Pitch Info, he’d never thrown a cutter in the majors before that. He may always be something of a junkballer from now on (just, maybe, not with Bronson Arroyo‘s salary), but could leading with the cutter as his primary fastball be the way through for Chacin, as it has been for Collmenter? He seems poised to find out. 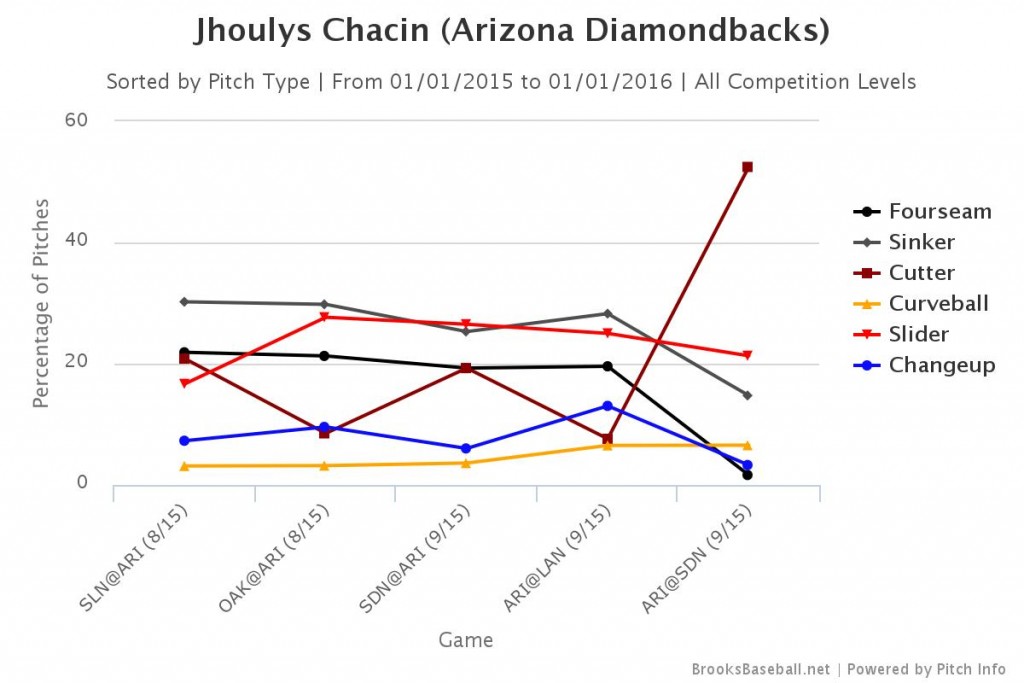 One Response to Double Plus: Jhoulys Chacin Might Be Different