Johnny Cueto: If You Can’t Make Him, Buy Him?

If you could add any player to the D-backs without regard to feasibility, who would it be? I wondered that question out loud on Twitter on Saturday, and got a mixed bag of different kinds of responses. Among the pitchers named in response: Carlos Carrasco, Sonny Gray, Zack Greinke, Kenta Maeda, Clayton Kershaw, and Chris Sale. Among the pitchers not named in response: Johnny Cueto.

That’s probably where feasibility comes in. Kenta Maeda can happen, and it looked to us like there was room to add two pitchers in the $15M-$20M a year range — but only if one of them came on a short term deal. That’s why we liked Scott Kazmir for the Offseason Plan, since there’s a chance 2 years could happen (unlikely, but maybe with a vesting option), and there’s a solid chance that 3 years could happen. But oh how we worked to see if Carlos Carrasco could ever make sense (David Peralta is the sticking point there), and while we included a Sonny Gray trade, the chances that that could happen depend completely on whether or not Billy Beane sees Yasmany Tomas as a player worth buying.

Part of the point is: the Contention Window is 2, maybe 3 years large. And the aforementioned Tomas is a big part of that: although more money may be coming in and salaries may be higher by 2019 and 2020, the $32.5M total that Tomas may be due in those two seasons may end up being hard to work around, as the D-backs are only on the hook for that money if Tomas thinks he can’t improve on those figures (either in dollars or years) at the end of the 2018 season. With Paul Goldschmidt potentially a free agent after his 2019 option year and A.J. Pollock no longer adding value at a discount after 2018, the payroll crunch looming at the end of the Window could be crushing — and the farm system isn’t exactly bursting with high-ceiling, low-minors prospects who may arrive around that time.

All of that makes the D-backs’ pursuit of Johnny Cueto curious. On one hand, we know the D-backs couldn’t be more serious about contention within this Contention Window, and Cueto may be the best pitcher they could afford right now. On the other, he may not be so good that when added to the Tomas commitment and a likely play for Maeda, one would be comfortable betting the entire outcome of the Goldschmidt Era.

So why, then, did the D-backs make a 6 year, $120M offer to Cueto earlier this month, as reported by Steve Gilbert? Why does it sound like GM Dave Stewart would be willing to improve on that offer to land Cueto (depending on ownership’s decision on whether they “can go there”), per Nick Piecoro?

In some ways, Cueto is exactly who you’d think the front office might like. He can still throw hard; Brooks Baseball has a top release speed of 97.27 mph for Cueto last season, which is pretty great for a 29-year-old. And it seemed a year ago that the D-backs were hoping to rebuild their staff in Dave Stewart‘s image, training pitchers with big fastballs to make The Leap from MLB quality to front-of-the-rotation quality.

Cueto started his career getting more strikeouts, but otherwise not missing barrels or pitching efficiently: 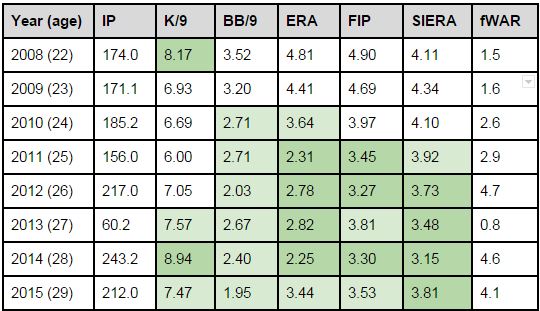 Cueto’s record is very good, and it shows steady improvement, up until last season. He really broke through, though, in a shortened 2011, the first year in which he became much harder to hit. He’s pitched like an ace in terms of results for most of the last five seasons. In the table above, I colored in just the middle five columns — the ones with rate stats. But take a look at how his record looks a little different when I turn everything into rate stats: 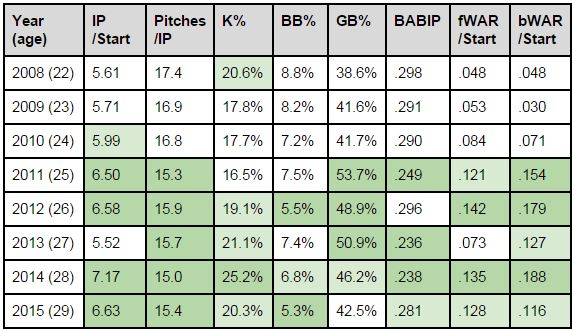 Cueto’s efficiency improved in 2010 somewhat, but the real change was from 2010 to 2011. Last year, the average start lasted 5.81 innings; Cueto has bested that with plenty of room to spare now for five seasons running, except for when he was working his way back from injury in 2013. That increased efficiency is part of why it looked like Cueto’s strikeout and walk rates took a huge dive in 2011, per K/9 and BB/9 — once you use batters faced instead of innings to get K% and BB%, the dropoff looks nowhere near as significant.

But from the perspective of an engaged observer, it looks like Cueto got to where he is by adhering to his own plan. To wit:

Cueto’s stuff flattened out a bit in 2015, especially at the end of the season, and especially with respect to his changeup, as Eno Sarris explored in embarrassing (to other writers) detail. But to get an idea of Cueto’s ace-level junk-baller-ness, here is the average movement on his six pitches in 2014 from Brooks Baseball, along with average velocity and BABIP for each pitch: 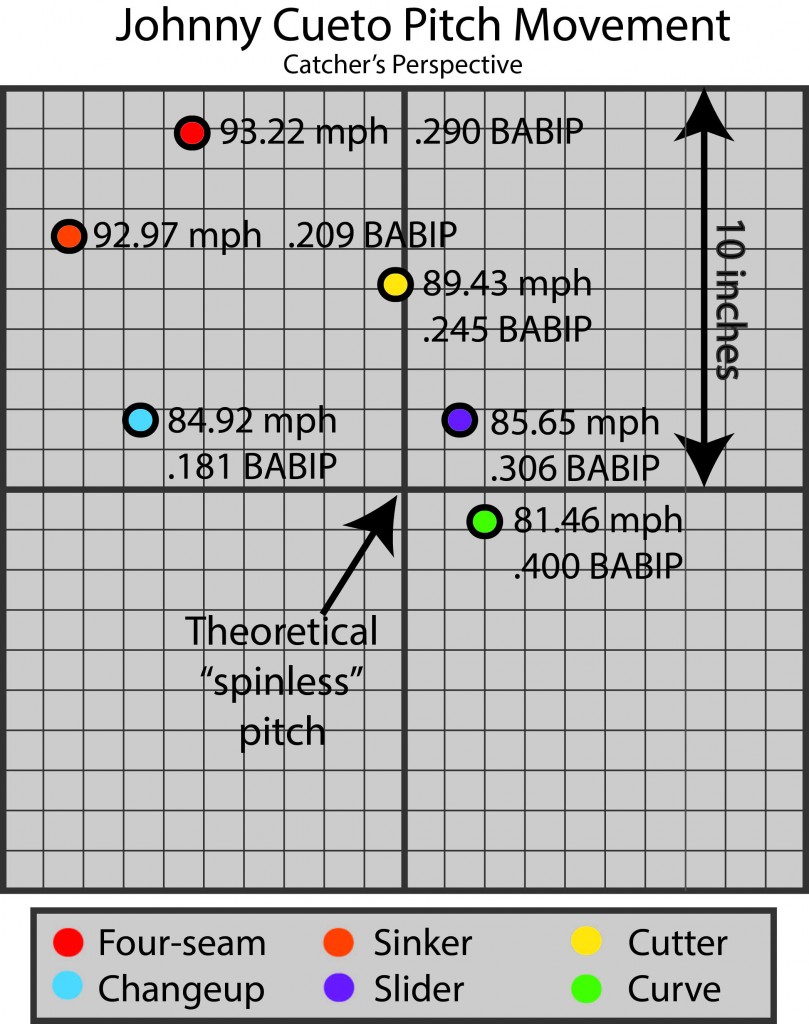 What the D-backs may get in Cueto is exactly what they were hoping to get in Rubby De La Rosa. Unlike RDLR, though, Cueto managed to do it, and he did it consistently. He did it mostly in a notoriously homer-friendly bandbox in Great American Ballpark, something that also checks a box on the D-backs’ shopping checklist. It also doesn’t hurt that Cueto has been able to do something much, much more valuable than what Bronson Arroyo did in avoiding the DL so long: soak up major innings when in the rotation. That 243.2 innings mark in 2014 led the NL.

Maybe the team can’t have a Kershaw or a Sale, a pitcher that makes his own luck by striking out enough batters to not need any luck. If the cupboard is bare of those kinds of starters, though, the D-backs could do a lot worse than picking up a pitcher who has shown himself capable of managing contact so well. Over the last five seasons, Cueto has held batters to a .269 BABIP — third best among all starters with at least 500 IP in that span, just behind Jared Weaver and Matt Cain and just ahead of R.A. Dickey and Clayton Kershaw.

There’s no starting pitcher who offers guarantees, and for the D-backs, an injury to a $20M+ man would obviously hurt the team’s chances of staying in the race. If the team were to go six years on a starting pitcher entering his 30s, though, maybe it could do far worse than spend money on a pitcher who might, at worst, pitch like an Arroyo type at the end of his career. Missing barrels does seem to age better than missing bats, although there’s hefty survivor bias in drawing conclusions from pools of late-30s pitchers.

Cueto has managed to pitch like an ace without “ace stuff” — and a pitcher who can fix himself is particularly welcome in Arizona. It seems like it would be fair to say that Cueto has made the most of his talent, something you’d rather not pay for if you don’t have to, but something worth at least as much or more than doing well the Nuke LaLoosh way. It would have been great if RDLR or Allen Webster or Randall Delgado or Yoan Lopez or even Mike Bolsinger could have gotten more out of their talents in Sedona Red. But the Contention Window is here, and that means imperfect bets can still be great moves.

6 Responses to Johnny Cueto: If You Can’t Make Him, Buy Him?