Stacking Up The D-backs Rotation

We know that the Diamondbacks’ rotation will be better in 2016. Part of that is because it would have been hard to be worse, but there have also been some notable additions. You may have heard about this. I’m guessing you did. For a team with big aspirations, a boost to the rotation was at the top of the holiday wish list and everyone knew it. Zack Greinke’s agent knew it, even if he only considered it on short notice. The Braves knew it and had plenty of time to think about it before dealing Shelby Miller. Other teams and players probably knew it, too, but it’s Greinke and Miller that have been settled upon as the key upgrades. Is that enough for this team considering their competition?

A rotation of Patrick Corbin and Friends was not going to get it done, mostly because his friends aren’t very good. That’s not his fault, but as Ryan examined first, then I discussed second, there really was a target magnitude for improvement. The team wasn’t grasping in the dark for just anybody who could help. No, they needed a pretty-specific boost, something to the tune of six or eight more wins. If you think the team was .500 without the additions, six or eight wins would put them in the contention conversation.

But, no team plays in a vacuum (no, not even Tampa Bay). While the Diamondbacks have been upgrading their rotation, so have the Giants and the Dodgers have at least tried to upgrade theirs. The Padres were thought to be potential sellers but have held onto their arms thus far while the Rockies are, well, off signing non-elite mid-to-late-30’s right-handed relief pitchers. The Rox gonna Rox, I guess.

Using 2016 Steamer projections from FanGraphs, here are the initial rotations for the NL West as of the end of the 2015 season, accounting for free agency.

Using those same 2016 Steamer projections from FanGraphs, here are the new rotation as of this very minute, accounting for all completed transactions.

Of course, each team will need more than five pitchers to make it through the season. If you’re interested in the larger picture, I’d suggest visiting the FanGraphs Depth Charts page. But it’s not the sixth or seventh-best pitchers on these staffs that’ll turn the tide, in all likelihood. They’ll be worth something, but a very small something. The only way their something really matters on any larger level is if one of the top-end pitchers gets hurt, which will probably happen a time or two throughout the division this seasons because these are pitchers and pitchers routinely break.

The real takeaway here is how much each team has or hasn’t improved since the end of the 2015 season up to this very moment. That can be summarized here, again using Steamer’s 2016 projections: 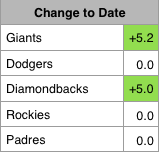 The Giants have added something like five wins and the Diamondbacks have added something like five wins. The fractions of wins aren’t important here. But what is important, and you may have noticed above, is that the new raw total for the Diamondbacks is a full win behind the Giants and about four and a half wins below the Dodgers. As I talked about two weeks ago, I think there’s room for a little more optimism than the projections are acknowledging. There are certain things that the system can’t take into account, and while that doesn’t invalidate the system, it does mean that we might have to tweak the outputs slightly if we know the information has changed beyond what’s presently accounted for.

So, with this in mind, I’d like to put myself on the record as having the Diamondbacks’ rotation closer to 13-14 wins. I think Greinke, Miller and Corbin will exceed what’s currently projected by Steamer and I believe Robbie Ray has a chance to improve on his 1.4 wins, too. That said, I don’t think Rubby De La Rosa is a 1.4-win starting pitcher. Then again, there are maybe some reasons to like him, as Eno Sarris pointed out last week. Archie Bradley may fit in here somewhere and Chase Anderson is certainly a viable number five, plus Zack Godley is just hanging around and maybe Randall Delgado and Daniel Hudson would like to start again, so who knows at this point? This will be a Spring Training decision for sure.

Even though the Dodgers lead the division in the pitching department after losing Greinke (which really just speaks to how good Clayton Kershaw is), there’s significant risk for Los Angeles. Betting on Brett Anderson and Hyun-jin Ryu to stay healthy is like betting on Paul Goldschmidt to stay in a slump. So while the Dodgers might be the most talented on paper, they may not end up the most productive on the mound. This is why they’ll eventually swing a trade for another mid-rotation option. The Jake Odorizzi rumors make a lot of sense while the Jose Fernandez ones make less. The Sonny Grays and Carlos Carrascos of the world might also be in play. Given the volatility of what they have in place, including feeling uncomfortable about former D-back cast off Mike Bolsinger, the Dodgers are currently stockpiling prospects to make a move.

The Giants, on the other hand, might have a claim more similar Arizona’s. One could easily see more than 4.2-wins from Madison Bumgarner given his talent. Johnny Cueto could exceed 3.2 wins, too. Jeff Samardzija is kind of hard to peg, but he should fair well in that ballpark. Meanwhile, an aging and Jake Peavy and a diminished Matt Cain aren’t the worst 4/5 options in the world. They certainly know how to pitch  and have had some productive streaks in the not-so-distant past. Like the Diamondbacks, the Giants are sort of “the top three guys and then ¯\_(ツ)_/¯,” although some would argue that’s unfair to Robbie Ray. Maybe it is, but then again, one short season of production with some glaring holes is hard to feel super comfortable betting on to repeat. The Giants and D-backs are pretty similar in the starting pitching department.

I won’t even bother writing about the other two rotations in any depth. Instead, I still expect San Diego to deal at least one starter and it’s probably Andrew Cashner once some of the other market options have dried up. The Rockies are still waiting to see if Jon Gray can do something notable, which he hasn’t so far. Steamer seems to like him, though. The end.

So if you’re handicapping the rotation race, maybe we summarize it like this: it’s all a big mess right now because the Dodgers are good but unstable, the Giants and the D-backs can keep pace with or exceed them and until the Padres make a trade, they’re in the mix, too. This all culminates with the NL West having the deepest pitching coffers of any division in the game. No one’s really departed the division (Greinke just moved teams and did you really expect me to count Jeremy Hellickson?) while Cueto and Samardzija have been added and we’re all waiting to see who the Dodgers bring aboard. So while the Diamondbacks have gotten a lot better on the mound, so have/will have the teams that they play most frequently. Maybe that helps them keep up with the pace, but it surely won’t have them running way out front by themselves.

So, you can kind of take away from this what you will here. The Diamondbacks have gotten better, even more so than I believe Steamer gives them credit for. When ZiPS and PECOTA come out, we can have a different conversation. The rest of the important teams have gotten or will get better, too. It’s kind of like when you got new toys for Christmas and you felt like a little 8-year old badass only to find out your friends all got the same stuff and now you’re just back to being a little 8-year old regular kid again. Then again, at least you actually have toys, something you should maybe just be thankful for in the first place. And maybe that’s where we should be on this whole pitching rebuild: the D-backs aren’t going to blow away the competition, but we should probably be thankful that they won’t be blown away either.

9 Responses to Stacking Up The D-backs Rotation