Stacking Up The D-backs Rotation Patrick Corbin is the New A.J. Pollock, Maybe

With Daniel Hudson‘s second TJ continuing to haunt the team in the background, Patrick Corbin was brought back very gingerly in 2015 — he made his debut more than 16 months after his surgery, with a unusually high number of simulated games and a handful of minor league rehab appearances. As a result, Corbin threw just 85 innings in the majors, short of what we’d think of as a platform for a full season. On paper, Zack Greinke will be the leader of the staff, and there are reasons to think that Shelby Miller can again pitch like a top of the rotation starter. Whether the rotation merely keeps pace with the rest of the NL West or is a real strength of the club depends in large part on whether Corbin can be the same kind of force he was in 2013 and in more limited time in 2015. 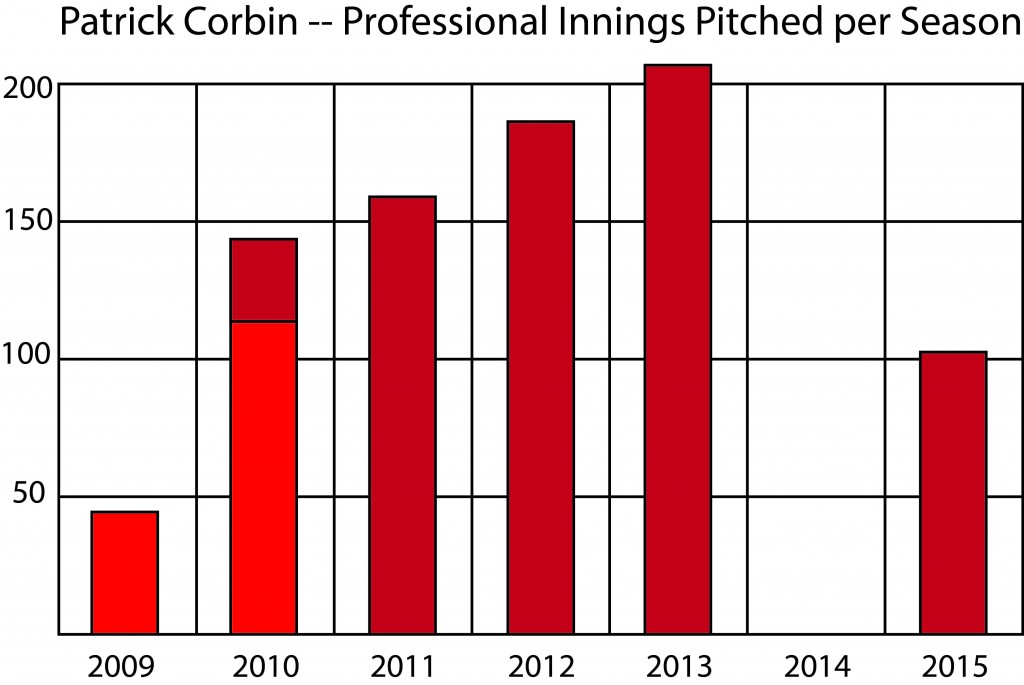 Corbin made his return on July 4 this year, with three months left in the season. It wasn’t too long before it looked like the Corbin we knew and loved from 2013 was back in full force. In one important way, the D-backs let Corbin be Corbin: he threw his slider even more often than he had in the past, an unusually high 28.9% of pitches after 22.7% in 2013. But in many other important ways, the kid gloves never really came off in the D-backs’ handling of Corbin in 2015.

One way: extra rest. Corbin made 16 starts in 2015, leaving 15 gaps between starts. Just 5 of the 15 gaps were “normal rest” — 4 days’ rest. Corbin most commonly pitched on 5 days’ rest (7 times), a symptom of the D-backs keeping their rotation in order around scheduled days off. As Corbin eased into the rotation, however, he got extra days off — 6 days’ rest between his first and second starts, and 7 days’ rest in between his second and third (thanks, All Star break). As the season wound down, he also got 6 days’ rest before his final start on October 1st.

More than that, though, we saw the kid gloves in just how far the team was willing to let Corbin pitch. Corbin pitched with a limit of about 90 pitches in 2015 by design, crossing that threshold just once in throwing 91 pitches on August 15th. That was probably Corbin’s best start of the season, one in which he let up just 3 hits while allowing 3 walks and ringing up 8 strikeouts. But Corbin wasn’t allowed to pitch his way out of the 7th inning after loading the bases with a second consecutive walk, yielding to David Hernandez, who recorded a strikeout to end the inning and the threat.

It’s not that Corbin really ran into trouble in 2015, although he did have that one start on August 4 where nothing seemed to be working and he was removed in the second inning after allowing 8 baserunners. The 90 pitch threshold, though, had a bigger effect on Corbin’s work than you might expect. In 2013, Corbin averaged just over 6.5 innings per start — in line with many top-of-the-rotation arms — but in 2015, he averaged just 5.3 innings per start. 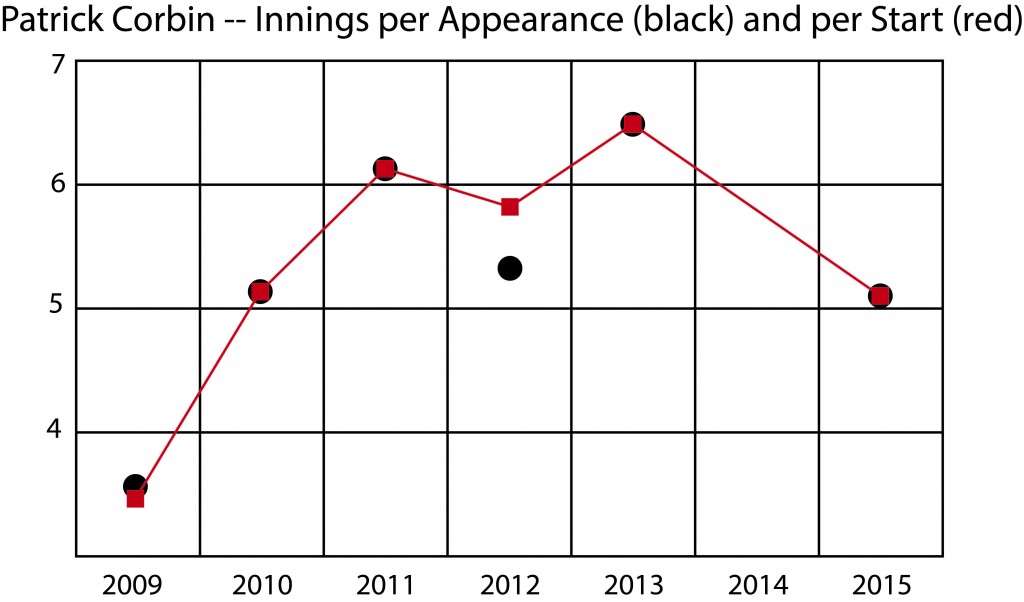 We can guess that the D-backs will work around Corbin when they can, especially if it looks like his playoffs attendance is likely to be requested. But a repeat of his 2013 season would have him pitching a whopping 106 innings more than in 2015, and they can only pitch around him so much. Let’s say they manage to use him for just 30 starts by skipping him over the All Star Break and starting him 5th to start the season. At just 6 innings per start, we’re still talking 180 innings, a bump of 78 innings over 2015. And if he were to repeat the kid gloves 2015 average of 5.3 innings per start, we’d still be talking 159 innings — a bump of 57 innings.

So what can we expect from Corbin in 2016? Stephen Strasburg had a very publicized innings limit in 2012 in his return from Tommy John surgery, and his return is instructive if different. Strasburg had gone under the knife toward the end of 2010, and managed to pitch his way back to 44.1 professional innings in 2011. The next year he pitched 159.1 innings in 28 starts — an enormous jump still (he’d thrown just 123.1 professional innings in 2010 after signing late in 2009).

More recently, another Scott Boras client in Matt Harvey had his innings scrutinized in 2015, pitching 189.1 innings in the regular season and another 26.2 in the postseason (216 total). As with Strasburg, Harvey’s first full post-Tommy John season had him pitching more than 35 innings more than his previous career high. Harvey’s surgery was after the season, not permitting a cameo the next year the way the Strasburg timing allowed — and yet Harvey may be the better comparison for Corbin, as 2015 was Harvey’s age 26 season (and Corbin will not turn 27 until July 19th next year).

Maybe we’d feel safer if we had the benefit of seeing Harvey in 2016 before reaching any conclusions with Corbin’s “safe” innings total next year, but the D-backs kind of will have that benefit. And while it would be uncomfortable for the D-backs to try to limit Corbin to 160 innings like Strasburg was, that is doable. Corbin has one other advantage on Strasburg and Harvey: he’s pitched much more than they had before they returned from surgery.

Corbin’s 208.1 innings in 2013 is still a mixed blessing, at best. Corbin was left to go 5.1 rounds with the Phillies on August 25, 2013 despite taking a beating (9 runs, including 8 earned), because the pitching staff had taken a beating by stretching for 18 innings the night before. He had a rocky next turn, was decent in his next two starts, but then seemed to tire badly at the end of the season, yielding 15 ER in his final three starts (11.1 IP). The Phillies start was… unnatural. But if you only subtracted Corbin’s final three starts when he was clearly tired, his season ERA would stand at 2.92, rather than the 3.60 ERA on the back of his baseball card.

When Corbin ramped back up at the start of spring training, he got hurt — an outcome that probably was not unrelated. And since the principal findings of Dr. James Andrews and Dr. Dan Fleisig are that pitching fatigued is the single most likely thing to result in injury, if the D-backs’ main priority with Corbin in 2016 is to prevent re-injury, avoiding fatigued pitching might be the key.

Looking back at 2015, it looks like that’s exactly what the D-backs were trying to do. Extra rest is great, but maybe it feels like extra rest only after regular rest. The same goes for pitching with pitch limits of 90 pitches. Still, if you were trying to avoid fatigued pitching as much as possible, you’d probably be better off with slightly shorter outings throughout the season than by hoping he returns to 6.5 innings per start, but skipping him a few extra times.

Corbin is very unlikely to pitch 200 innings in 2016, but instead of taking advantage of the D-backs’ depth to use a Triple-A starter to spell Corbin every once and a while, we should expect the team to use the same quick hook they used with Corbin in 2015. We may never see Corbin throw as many as 100 pitches next season, as he works his way fully back. And while pitching Corbin 5th in the rotation to start the year would be a way to limit his total starts, it’s even more likely that the team will pitch him second, right after Greinke. If the team knows it wants the bullpen especially available on Corbin Day, wouldn’t you want Corbin Day to come right after Greinke Day? I think so. If Corbin runs into trouble more than once, he’ll probably be pulled. If he crosses the 90 pitch threshold in a difficult 7th inning, he’ll probably be pulled. If the D-backs do those things, Corbin could be in line for about 170 innings in 2016. Given the Mets’ recent experience with Matt Harvey and the D-backs’ intentions for 2016, that seems like a workable outcome — and one that still might leave something in the tank for a possible playoff run.