The D-backs Are Better Than This, Right? Double Plus: Non-Roster Invitees Will Add to Spring Training Intrigue

This offseason, the D-backs aren’t inclined to leave as much to chance — they shelled out the dollars for Zack Greinke, shelled out a different kind of capital for Shelby Miller, and by trading Ender Inciarte, they made it look like they know who their starting outfielders are, and that they think a fourth just isn’t that important. A year ago, however, was all about chance, at the highest volume. With a year of major league playing time to burn and Patrick Corbin starting out on the shelf, last year was like an extended tryout for most members of the pitching staff. There was even a tryout for those tryouts, with the team entering camp with something like fifteen starting pitching candidates (not including two others that ended up making 4+ starts last season).

From December 16 through January 13, the D-backs made no roster transactions at all, at least according to the team web site’s transactions page. That’s a solid 28 days between transactions, the longest gap since another 28-day gap from December 21 to January 18…in the 2010-2011 offseason five years ago. Through the Winter Meetings, the D-backs were focused on the best possible Plan A for the roster, paying high prices in the process.

In terms of Plans B, the D-backs are back to the see-what-sticks model, as it appears with the trade yesterday for Cody Hall, and with signing today of Sam LeCure. Few of the top offseason free agents and trade targets are still available — and those who are would probably admit that things haven’t gone exactly to plan. Plans A get set in December. Plans C get set in February, and in March. Plans D are kind of like a year-round project, I guess. But January is about Plans B.

We noted last month that the D-backs had been gobbling up minor league pitchers with very high ground ball percentages. Those aren’t necessarily pitchers that will get plugged in after just one or two injuries or poor performances (what I’ll call Plans B), but more of that kind of year-round, Plan D thing. Would it be a shock if Kyle Drabek, Adam Loewen or Jake Barrett saw MLB time for the D-backs in 2016? No more so than it was to have Jhoulys Chacin wearing Sedona Red in August.

Plans B are a little different. Plan A might provide for 8 or 10 relief pitchers — it’s such a mortal lock that someone will get hurt that it’s not like you can have fewer than that. Plans B cover the less certain or important contingencies that are still very likely, relief pitchers 11 and 12, maybe, a third catcher at spring training, a veteran starting pitcher recovering from injury. The way I’m thinking about Plans B guys, they’re much more likely to be on the 40-man roster than Plans C or D (but hey, there’s always one Will Locante that blows up those kinds of bright lines). 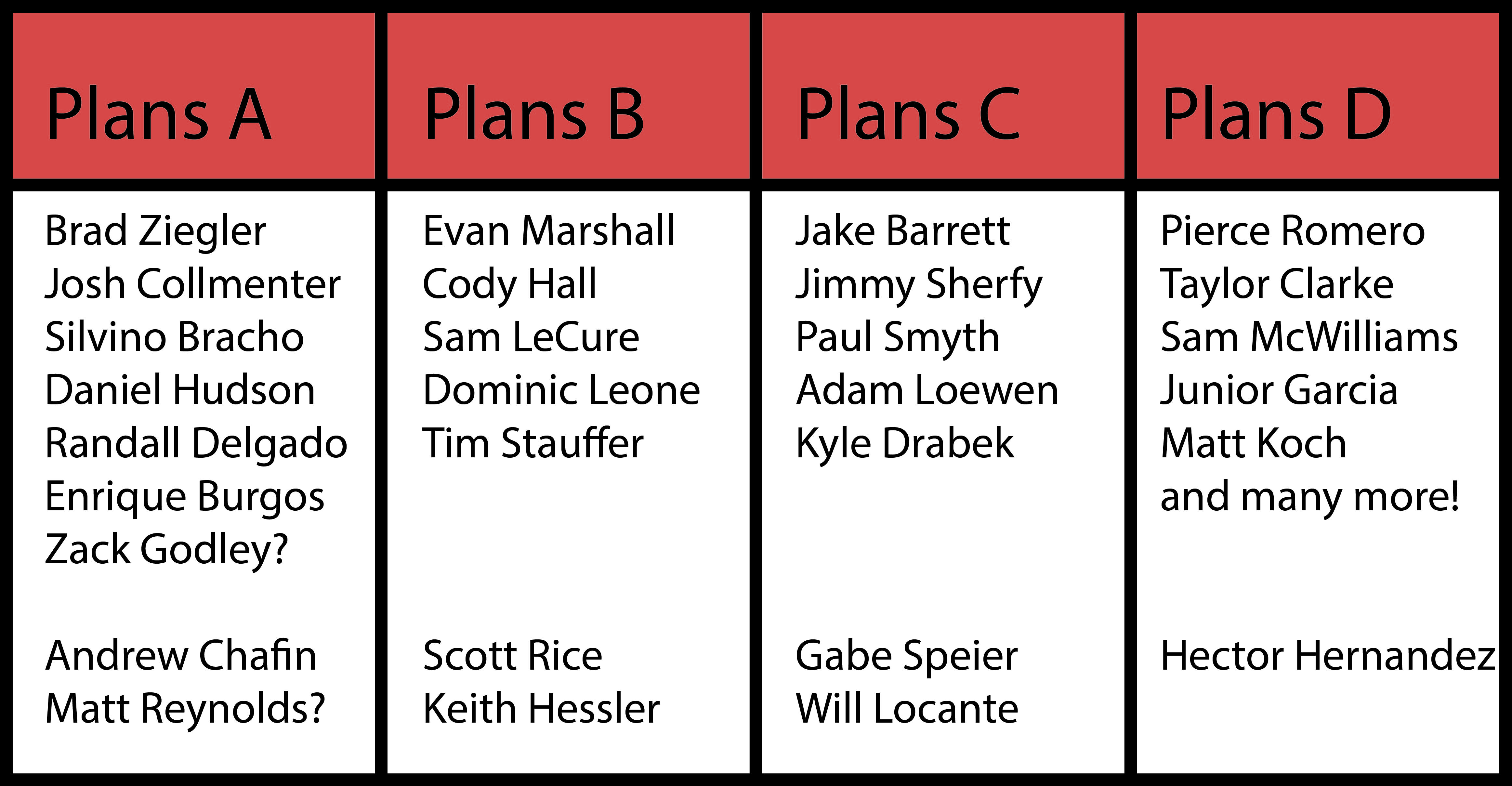 This is all a very long way of saying: LeCure is a fairly important piece, but we’re still in the background here. You need these first guys to get plugged in, and you need the Plan C guys, in case of emergency. Never hurts to have Plan D guys, because someone can surprise you (wouldn’t Zack Godley have been there a year ago?), but also because Plan B guys are so important that you need a plan in place for the next generation of Plan B guys. You can always add Plan C guys on minor league deals, the guys that plug the holes that only happen if things have gone wrong. Plan B guys, though, maybe not.

The D-backs signed Sam LeCure in part because they could sign him. In mid-January, it’s time for free agents to consider backup plans, too, and while Chase Field is no picnic and competing with so many other pitchers is less than ideal for a free agent, the D-backs could sell LeCure what they reportedly sold Yoan Lopez: “sure, there are a bunch of guys. But very few of those guys are actually blocking you. We’re signing you for a pool out of which we will promote based on merit.” As the D-backs showed with the contract they gave Greinke, you can make a Plan A happen. But you can’t make a guy take your offer to fill a Plan B spot; for them, the distinction between majors and minors is much bigger than the difference in minor league salary you might offer.

The D-backs were a little lucky to land LeCure, in the sense that the fit happened largely on chance. Whether they’ve found a steady arm for the bullpen, though, will also depend on luck.

Sam LeCure: Remaking Himself As the D-backs’ Kind of Guy

In terms of stocking the cupboard with minor league pitchers, we might as well call the D-backs’ strategy “Plan GB.” That’s what most likely caught the D-backs’ eye this month with LeCure: the chance that despite building a track record as a high strikeout/low walk pitcher, LeCure is now someone else.

Prior to 2015, LeCure’s career went a little like this: Bad, Decent, Very Good, Excellent, Decent. The wheels came off during LeCure’s 2014 season, and after struggling for the last four months of 2014 and presumably failing to impress in 2015 spring training, the Reds started LeCure off in the minors. 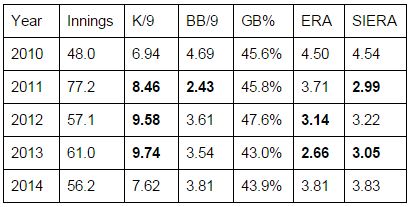 LeCure’s ground ball percentage skyrocketed in that late-season cameo. It’s not like he was working on that in the minors; the data at mlbfarm.com reflects a lowish 41.9% GB% up through the date of his call up. That 58.3% GB% and LeCure’s past success had to look like catnip to the D-backs, especially on a minor league deal.

The fall-off in success that LeCure experienced in 2014 doesn’t seem that mysterious. Never a fireballer, LeCure’s fastball reached new lows in 2014: 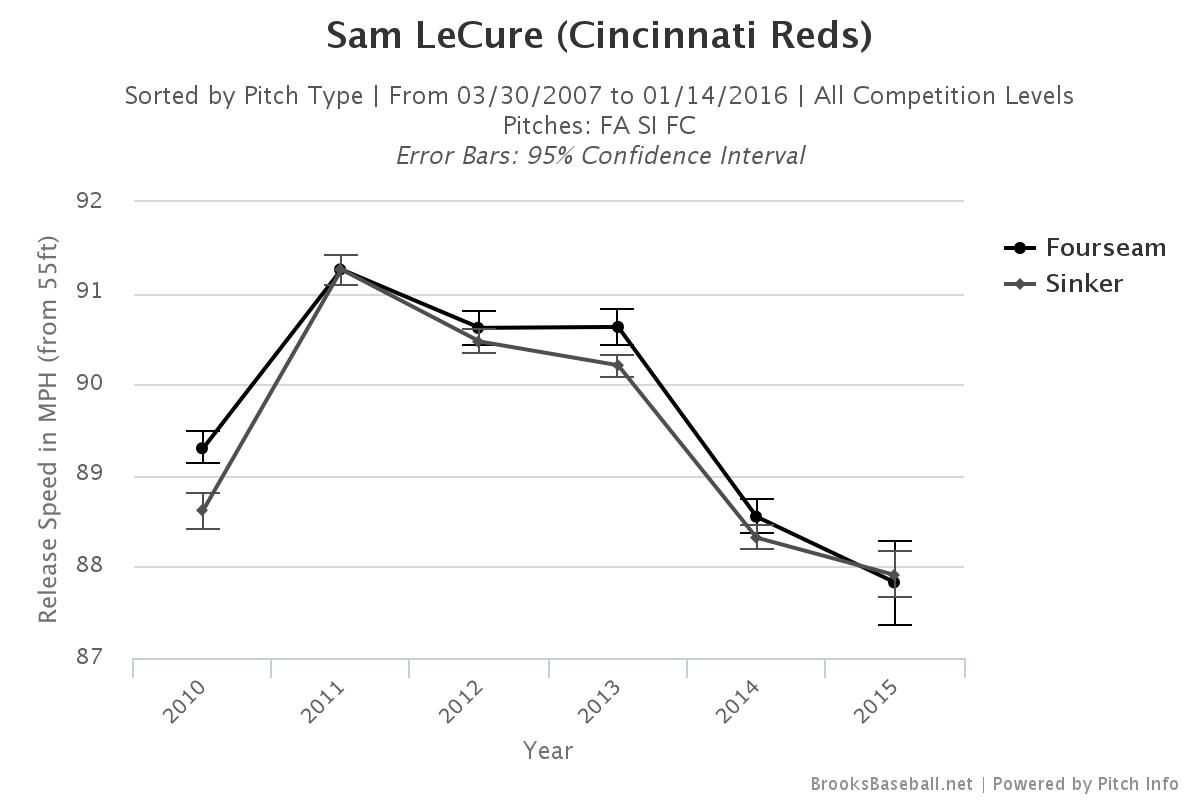 That doesn’t bode too well for the future — since pitchers in their 30s rarely see velocity improve, if velocity was tied up with LeCure’s effectiveness, success could be irretrievable. The spike in ground ball percentage, though, does give us some hope that he can succeed a different way. Like many pitchers with below-average velocity, LeCure has always favored throwing his fastballs low and away. Here’s his fourseam and sinker to lefties on the left and righties on the right: 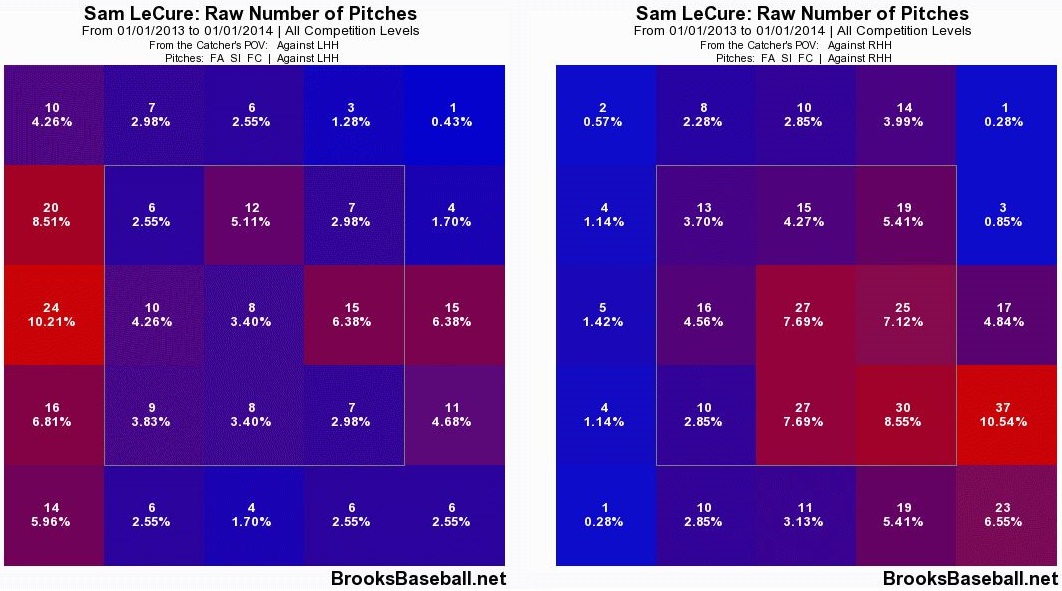 LeCure’s 20 innings in 2015 isn’t much of a sample size, but for what it’s worth, it doesn’t look like he generated more ground balls by pitching lower. Hugging the middle of the plate more shouldn’t have resulted in more ground balls. 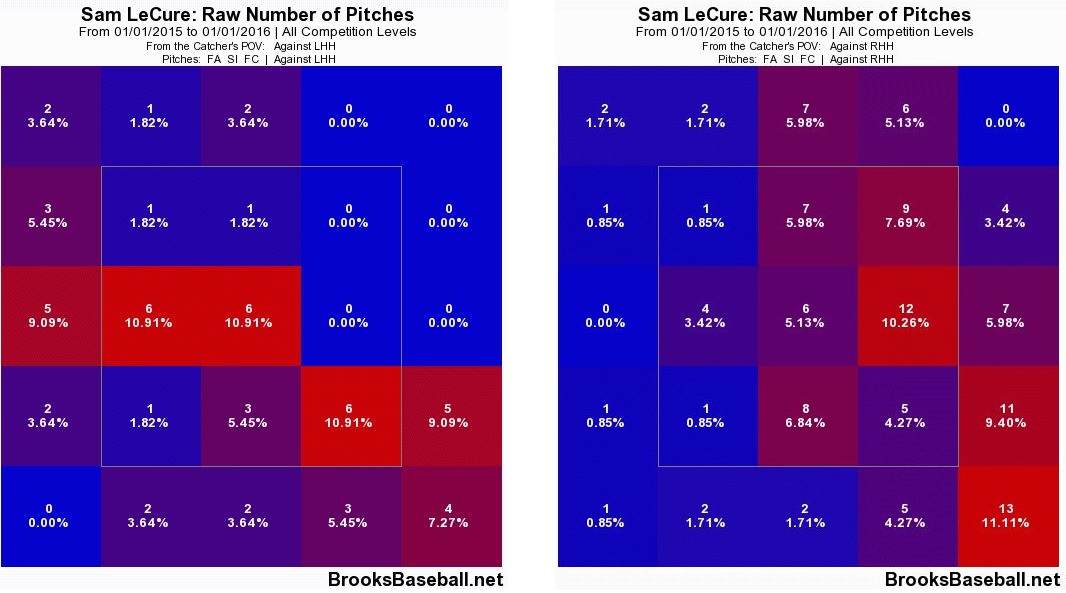 LeCure has relied on his sinker as his primary fastball for the last four seasons; he seems very comfortable settling in between 37% and 39% usage for that pitch. If he keeps up with the splitter 20% of the time or so, that’s two pitches that may continue to strongly favor ground balls — and as it happens, hitters haven’t actually put his fourseam fastball in play nearly as often as those two pitches.

LeCure does look like he may have reinvented himself enough to hang in the majors as a decent relief option, one that could keep his ERA under 4.00 even with Arizona. There’s a lot of “if” to that scenario, though, and the D-backs are trying to eliminate as much “if” as they can from Plans A. That makes LeCure a strong option among Plans B — but only that.

The D-backs have to love everything about LeCure’s sinker. But even though it sure seems like they were attracted by LeCure’s spike in GB%, and even though that seems splitter-related — I’m not sure we can make the same assumption about the split. No one actually throws one on the D-backs staff, which feels meaningful considering the great number of pitchers the front office has cycled through in the last fifteen months. In the spring, we’ll be watching for LeCure’s splitter usage for some clues as to what the D-backs are looking for. If the team suffers more injuries in its Plans A relief crew than it anticipates, chances are pretty good that LeCure will be there as the next guy out of the gate.

3 Responses to D-backs Sign Sam LeCure for Plans B