The Inside the ‘Zona 2015-2016 Offseason Report Card Double Plus: Evan Marshall’s Reemergence

Double Plus: D-backs Could Have Effective Catcher Platoon

Considering the D-backs’ struggles to build a pitching staff, it’s strange and probably unfortunate that the catchers the team has in camp right now are likely to rate poorly on the defensive side of the ball. At the plate, though, the story could be a lot different. Welington Castillo will undoubtedly lead the way, barring injury; his 17 home runs in 80 D-backs games last year was remarkable, and it powered a .496 slugging mark. Castillo probably won’t be that effective this year, especially since he’d hit just 29 bombs in his other 316 career games. PECOTA’s projection of a .249/.317/.418 slash line with 18 homers feels about right, and that would still be a solidly above average hitting performance.

You’ve probably heard that Castillo has been much better against southpaws in his career, with a bigger platoon split than average. That’s true. You’ve also probably heard that Chris Herrmann bats left-handed. That’s also true. You might have imagined that they’d make a decent pair at the plate, and you’d be right, again—but maybe for the wrong reason. The D-backs could have a decent hitting platoon on their hands at catcher, but that would probably need to be more nuanced than a simple left/right platoon.

In other words, a right/left platoon really wouldn’t work and it really wouldn’t be helpful to the extent that it did work. That’s not, however, the only way the catchers can be aimed. As Jeff has explored before, pitchers’ launch angle tendencies can form the basis of a platoon; fly ball hitters tend to do better against ground ball pitchers than they do against fly ball pitchers, etc. And as a commenter pointed out Tuesday (thanks, anonymous), we can also trace how hitters fare against feast-or-famine pitchers with high combined K and BB rates (called “power pitchers”) versus pitchers with low combined K and BB rates who pitch to contact (called “finesse pitchers”).

Try this on for size, using career OPS numbers: 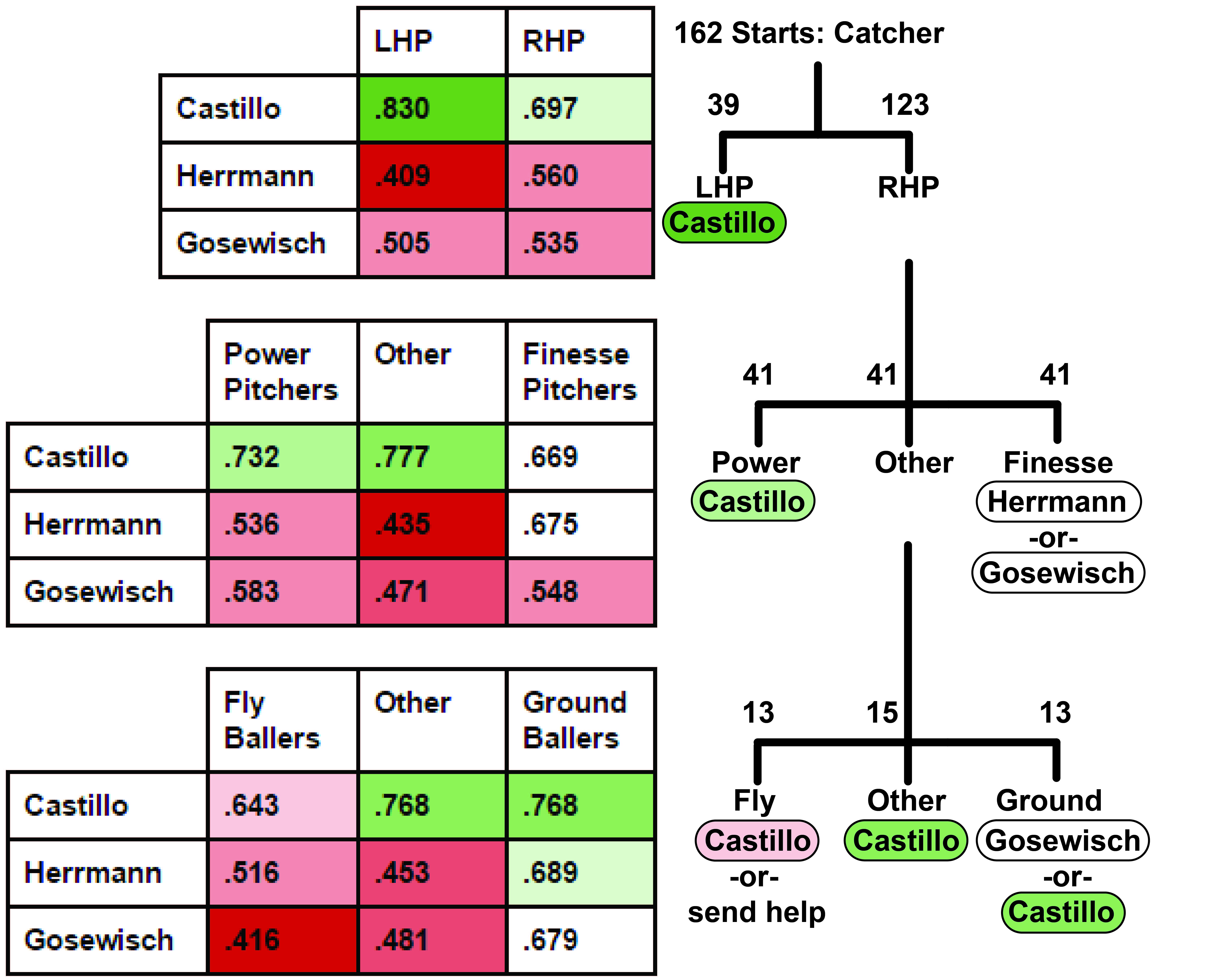 Seeing this should make you suspect a few things. One: I might be color blind, or I secretly like purple. Two: it can’t possibly be this simple.

Chances are you’re right about all of that. Playing around with it a little, I strongly suspect that there’s a lot of overlap between “power” and “fly and between “finesse” and “ground” — and RHP may be skewed in the direction of “finesse” and “ground.” Also, it’s definitely not clear which of these three things mean the most if they’re all in play. Still, it looks a whole hell of a lot like there isn’t much here that Herrmann can do that Tuffy Gosewisch can’t, especially when considering a sizable difference in defense.

As is nearly always the case: we can do better. So after assigning all of the LHP starts to Castillo, I simply acted like Power/Finesse and GB/FB were equally as important. Last year, catchers faced lefties about 22% of the time, and so for the RHP-specific starts, I also drained away 22% of each catcher’s platoon split in hopes of more accurate RHP-only numbers. Career defensive numbers suggest that Gosewisch would be worth zero to -5 runs on defense over a full season, with Herrmann more like -8 to -13, and Castillo -13 to -18—so I also resolved to give the better defender the nod if he were within 70 or 80 points of OPS of the next-worst defender ahead of him. 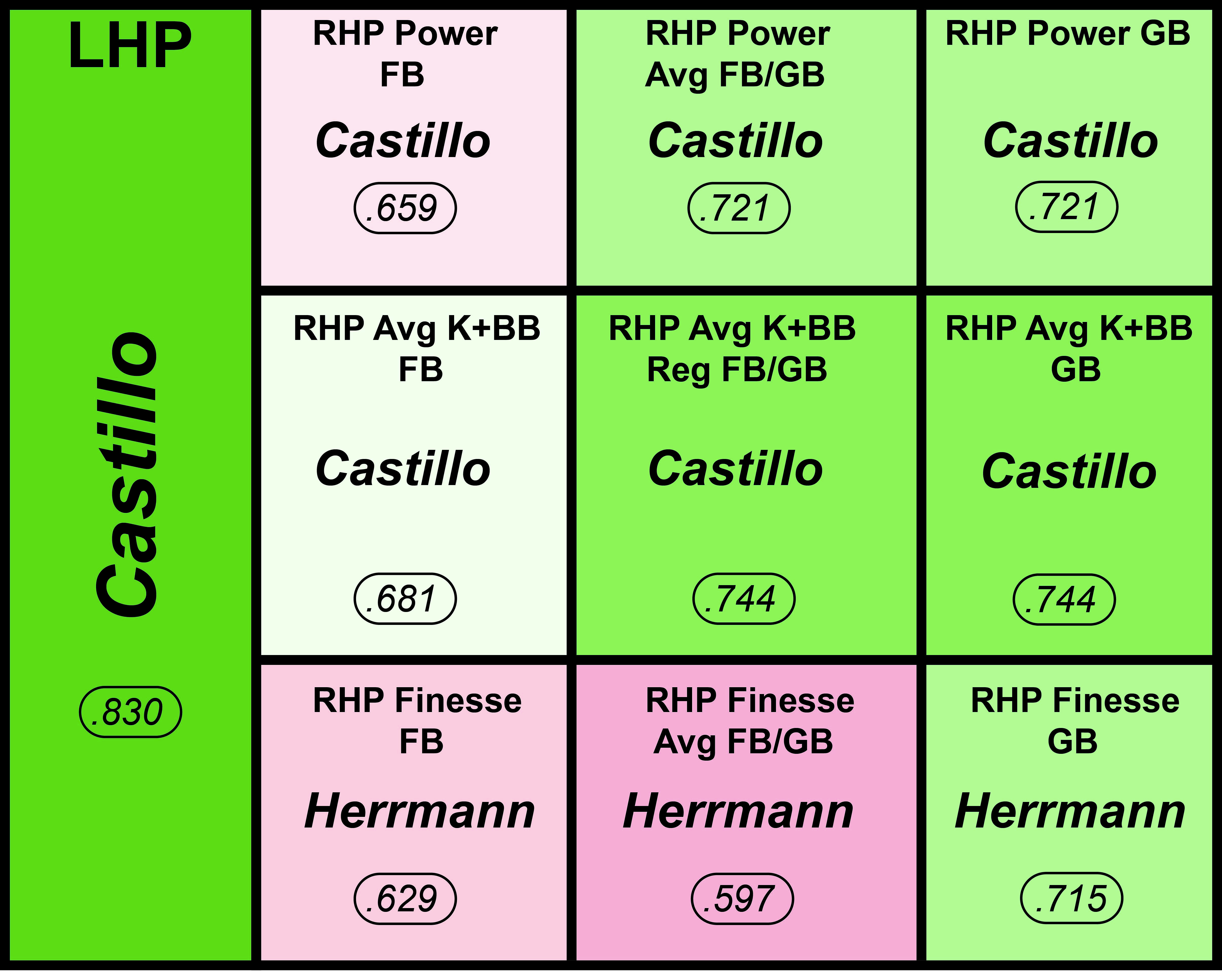 As it happens, this would put Castillo on track to start 120 games, and that’s a hell of a lot of green. If things worked out this way, D-backs catchers would have a .721 OPS, at least against opposing teams’ starters. There were a number of close calls, though. You could make a strong case for Gosewisch in the box on the far right, halfway up: his OPS worked out to a .582 there, and his defense makes that a close call with Castillo. Moreover, Finesse/GB and the Finesse box next to it with league average FB/GB did not give Herrmann heavy advantages over Gosewisch. There’s appeal to adding that bottom right green with Herrmann in the fold, but there’s also a lot of appeal to having him available for Finesse/GB — it’s a good place to rest Castillo, whose .626 OPS there is not better than Herrmann’s (and whose defense is a step worse).

I don’t want to pretend this is more accurate than it is, because it’s really not that accurate. It’s also too simple in a lot of ways, including pitching changes — Herrmann looks like the top guy to spell Castillo for starts, but if he’s asked to face a lefty late in the game, Herrmann’s two pink squares turn into the orangest pumpkins: a .478 OPS for Finesse/FB, and a ridiculous .446 OPS for the other box. It could really be helpful to carry three catchers, if possible, because despite many similarities, there are a lot of ways to mix and match Herrmann and Gosewisch. And, if the D-backs choose—they could get above-average offensive production out of catcher after all.

3 Responses to Double Plus: D-backs Could Have Effective Catcher Platoon