Few things in life seem to make sense. Why do bad things happen to good people? What makes rational people do irrational things? How do I always manage pick the slowest checkout lane? Well, at least there’s an answer for that last question. That notwithstanding, life loves to sprinkle in little bits both of mystique and brooding.

Nevertheless, this is a baseball blog, not Ask Marilyn, so allow me to transition towards Daniel Hudson (don’t worry, I’ll wrap this all back around). Daniel has been quite a bright spot on an otherwise thoroughly mediocre team thus far. He is a joy to watch. Heck, look at this reaction shot – how fun was that?!

Ladies this is the reaction that I get when he sees me every time … Eat your hearts out #iwish @DHuddy41 pic.twitter.com/xTh1RqRKAt

According to Statcast, he has the 24th and 31st fastest pitches in baseball in his four-seam and two-seam fastballs respectively. My goodness, all this is just on the field, off of it he’s been chronicled in Jeff Passan’s excellent new book and even on Twitter he’s more fun than a barrel of monkeys – most notably starting the #slaphands hashtag to christen each Diamondbacks win. He is a five-tool personality.

Nonetheless, his success in this still young season has been quite nonplussing. An odd concoction of adjustments that seem totally confounding and at times contradictory to his results. Both his strikeouts and walks per nine have dropped by around a third, he has yet to yield a home run, and though his BABIP is at an obviously unsustainable .163, he’s allowing hard-hit balls 11% less often than last season (i.e. 9% below his career average). This is quite a mixed bag. But remember, Daniel’s a fun guy – what could be more fun than bedazzling the masses in different ways? And while a 6% increase in contact and 3% decrease in swings and misses combined with the large drop in strikeouts may be concerning on the surface, it may be closer to the product of a fruitful adjustment than a cause for concern.

Hudson’s decrease in walks and avoidance of mistakes might be the first signal in a change of approach. In the supplementing chart, I’ve highlighted the three spots where he tends to make mistake pitches. 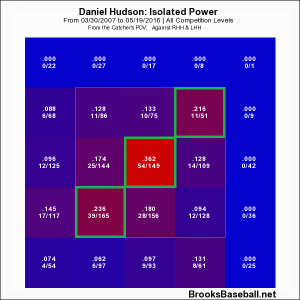 Over his career, he’s thrown pitches in one of these three areas 12.26% of the time. Last year, he located in said spots 11.45% of the time and this season he is down to 10.23%. Though two of every hundred pitches might not make a grandiose difference in such a small sample size, that is, explain how he’s been able to suppress power so well this season, it is a marker that illustrates awareness of where the happy zones for hitters are and discipline to avoid them. 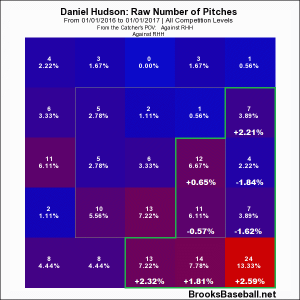 Bold percentages at the bottom show the increase or decrease in frequency of pitches thrown in the respective zones compared to career averages.

Looking specifically at his approach for right-handed batters, there has been a noticeable shift as well towards pitches down or away – an overall increase of 5.55% over his career averages in the highlighted area. Additionally, while he threw pitches below the strike zone only 27.62% of the time to righties in 2015, he’s enlarged that to 37.21% this season. Comparing this trend with the accompanying isolated power chart against right-handed batters and it’s easy to see why this shifting in location has paid dividends thus far. 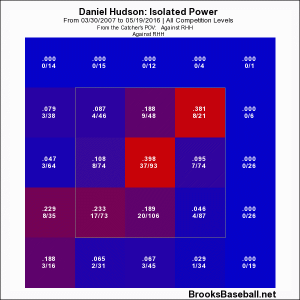 Not only is Hudson pitching to locations where hitters have a tougher time making solid contact with his stuff, he’s also inducing more swings and more swings and misses in these spots. Going back to the right-handed batters in the area I highlighted (second chart), hitters are swinging 38.04% of the time and missing 14.13% of the time in 2016 compared to 29.59% and 11.23% respectively in 2015. Again, although hitters are swinging more at these pitches, and thus making more contact, they’re starting to miss more as well.

While this level of success is probably not sustainable in the long-run, think BABIP, Daniel Hudson seems to be evolving his approach for the better. In perhaps trading some of his strikeouts from last season, he has found a way to weaken the contact allowed against him while inducing more swings and swings in misses in spots that have proven less consequential for him when mistakes are made. It’s quite fun to see someone make these adjustments – maybe it does make sense that Daniel Hudson is the one apparently making them.

One Response to Damn Daniel: Hudson Shoeing a New Approach Against Righties