Something weird is going on in MLB this year. Per FanGraphs, the rate of pitches in the zone has gone up sharply, from 44.7% to 47.1%. That may not sound like a lot, but 139,949 pitches have been thrown this year — that’s an extra 3,359 pitches in the zone, and it’s not even one fifth of the way through the season. It’s not unusual for April to have a higher zone rate, but that would be something in the order of 1% — not 2.4%. And either as a consequence or a cause, there’s been a really big change in swing rate this season, too.

Hitters swung at 46.9% of pitches last year, but that’s way down to 45.6% — over 1,800 fewer swings than we would have expected. Why? I don’t know. Because zone rate is up, there should be more pitches to hit — and yet there are fewer attempts to hit them. Maybe it’s that hitters are swinging at first pitches less often, and have fought their way to hitters’ counts more frequently — that could cause a higher zone rate, since there are higher zone rates when pitchers have fewer balls to burn. No matter the cause, it’s happening. And it’s having a pretty big effect on the D-backs.

Last week, we looked at what seemed to be a team trend. Aggressive hitters like Jean Segura and Brandon Drury were taking the league by storm, and other hitters on the high end of the swing rate spectrum like Yasmany Tomas, Chris Herrmann and maybe Chris Owings also seemed better than expected. Hitters who have tended to be more selective, like Phil Gosselin and David Peralta, were not doing so hot. There are exceptions, to be sure: Jake Lamb and Welington Castillo are selective hitters that got slightly more selective, and they’ve been better than fine. Nick Ahmed is a big exception (more on that later this week). Paul Goldschmidt is not. In the end, it seemed like the safest takeaway was that hitters who moved toward the middle on swing rates were reaping dividends — but that doesn’t change that it was the more aggressive players in the first place that have done well this season.

Doesn’t that connect with the league wide trend? Pitchers have been faced with a changed approach that has seen almost 4 fewer swings per pitcher/game, and while we’re not sure which has caused which, Zone% has risen as well. Plate discipline is different this year. Doesn’t it make sense that the more aggressive D-backs hitters have done well if pitchers have expected fewer swings, and have pitched more in the zone to combat that? I think so. Pitchers have thrown 3.88 pitches per plate appearance this year, up from 3.82. Again, that may not sound like a lot — but that’s like saying that all of baseball last year would rank 27th this season. It’s a big change.

Let’s say for the sake of argument that in this changed Zone% environment, being aggressive is something that can help a hitter a great deal. It would stand to reason that a significantly more patient approach could backfire. Last week, Jeff put Goldy’s 2016 under a microscope, and found that while his drop in batting average probably shouldn’t be alarming, a large decrease in “hard” contact and an even larger increase in “soft” contact is the Goldy smoking fun. Last night in Colorado, Goldy showed some signs of life, recording two hits (including a double), both of which registered as “hard” contact. Even with that considered, though, things have snowballed since last week.

Yes, Goldy has been very patient, and yes, Goldy was already patient. Last year, Goldy’s swing rate was just 39.4%, which was the 10th-lowest of 141 qualified hitters. By the Thursday game last week, Goldy’s swing rate had plummeted to just 35.5% — a rate that would have ranked him as the lowest of those 141 hitters last year. As of today, Goldy’s swing rate is down to just 33.8%. Basically, last year Goldy swung at more than 39 out of 100 pitches, and this year, it’s been less than 34 out of 100. Smaller samples have more variance, so it’s not as weird as it would be if he did it over a full season — Goldy doesn’t have the lowest swing rate of 194 qualified hitters, but he’s pretty close.

The “changed heat” map on the right is from the perspective of the pitcher — Goldy would stand on the right of it. So while he’s been pretty consistent all over the place with a decreased swing rate, it does look an awful lot like it has to do with pitches inside. As Jeff pointed out, pitchers are still clobbering the part of the zone low and away against Goldy (here, down and to the right), and it looks like Goldy is biting on them a little more often. But that’s come in conjunction with a healthy cut in swings inside, as well.

Why? This looks psychological, for sure, as hitters rarely change their approach this drastically. And back when Goldy made the leap from “good player” to “MVP candidate,” he did it by dominating down and in, in addition to up and in and even up and away. Goldy has a large wheelhouse, but there’s not a lot of spinning going on there. 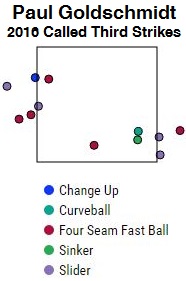 Whatever the story, it looks like it’s snowballed; considering Goldy’s tentative approach was widely talked about a week ago, it is super weird that he’s down to an extreme 29.5% swing rate in the last seven days.

Could it be having calls go against him? Maybe. Goldy has struck out looking 12 times already this year, but only a handful of those final called strikes were solidly in the strike zone. Arguably, half of them were not — although all but three or four are routinely called strikes (note: zone on left is from the catcher’s perspective, from Baseball Savant). But wouldn’t that have the effect of encouraging a hitter to swing more, not less?

We can get more clues by cutting up Goldy’s swing rate even more. We saw it seemed to have something to do with location — Goldy swinging at fewer inside pitches. It doesn’t seem to have everything to do with pitch type — Goldy’s swing rate is down on hard, offspeed and breaking stuff, although it’s down more against breaking stuff. The handedness of the pitcher seems to matter more. Goldy’s swing rate against lefties is low, 35.5% this season, but while that’s a drop from 37.3% last year, it’s not actually all that strange — and he swung against pitches from lefties 35.5% in 2014, too. No, it’s mostly about right-handed pitchers, it seems. In the previous two seasons, Goldy was right around 40% against righties. This season? 33.4%.

Everyone is throwing Goldy more fourseam fastballs: lefties, from 27% to 38%, and righties, from 36% to 43%. Even more telling, righties have completely changed their approach when they get ahead of him — he’s seeing fourseam fastballs half the time when righties are ahead, even though they only dared in that scenario 28% and 32% in 2014 and 2015, respectively.

Maybe there are more contact-oriented pitchers installed in the game? I believe the biggest contributor to the downturn in offense we’ve seen in the last 5-7 years is teams’ appreciation of defense, which seems to have led to defense getting used to help make playing time decisions — which, in turn, helps decrease run prevention on both sides of the ball (slightly better hitters benched in favor of players with larger defense advantages, lowering offense, and also making defense better in general). Teams have now had Statcast data for a full season, and you have to wonder if contact management pitchers are getting more widely appreciated as they get more completely understood — maybe as a league-wide trend, pitchers are relying more on their defense, because more contact managers are getting chances to pitch. Maybe.

Whatever the cause, though, pitchers are living in the zone much more than they have in the past. As noted above, that could be because hitters are in more hitters’ counts. But it’s just as possible that hitters are swinging more because pitchers are in the zone more. The one trend gives you more confidence in the other. For a selective hitter like Paul Goldschmidt, those two trends seem to have caused a problem.

You’d have to ask Goldy to be sure (and even he may not know), but it’s hard not to connect the increase in fastballs from right-handed pitchers with the drastically decreased swing rate against them. That’s a league trend — pitching in the zone and more fearlessly than in the past — bearing fruit in Goldy’s case. It’s an unexpected swerve from the pitchers, and it’s one he hasn’t seemed to expect — he’s always done well forcing pitchers to give him pitches to hit by taking balls, and now pitchers have turned the tables. It’s too much of a good thing, and now, Goldy is swinging at the first pitch much less than he has in the past, just 17.9% of the time, down from 24.3% last season. He doesn’t swing, and it’s a ball, or it’s a strike. Either way, he gets more balls until the last pitch of the at bat, since he also has only been swinging at pitches out of the zone 17.0% of the time.

It would make sense if it were psychological: lack of success when making contact could lead a hitter to wait on better pitches to hit. The problem: Goldy isn’t getting better pitches to hit. Either he goes back to swinging at the garbage, as he always has with runners in scoring position, and as he did when he made his MVP-caliber leap — or he won’t. If he does, we better hope the weaker batted ball profile that Jeff identified is just a blip on the radar. If he doesn’t go back to swinging at more garbage, we’re in for more of the same. With a soaring walk rate, Goldy is still a dangerous hitter, even if it’s not hitting — but teams would much rather face the 2016 super-selective Goldy than the 2015 hitter that brought the house down on their heads.