Snakebitten: Though Relatively Healthy, Injuries Confounding D-backs Outfield What the D-backs Can Learn From the Rest of the West

Peter O’Brien is Not Working Out

Peter O’Brien‘s MLB call-up this season was completely warranted. The guy had slugged his way into some big league action and based on the response of his fans, it was even a month or more late. He’d been crushing it in Reno through the first two months of the season, just like he crushed it in 2015. He was on a pace that would surely have had him threatening for the all-time AAA single-season home run record. Through June 10th, he had 17 long balls for the Aces and if that had held, he would have been looking at something like 45 home runs by year’s end. Ron Kittle had launched 50 in the PCL back in 1982 and O’Brien wouldn’t have been far off. One could even argue that as the months warmed, his home run rate might have increased.

But there’s no real benefit to the parent organization launching all of those bombs in the minors if they could have most of them launched in the majors. So, O’Brien was called up. Given the depth issues in the Diamondbacks’ outfield, there was playing time to be had. David Peralta continues to miss time, Chris Owings is hurt and All-Star A.J. Pollock is likely out for the year. Socrates Brito had scuffled, and has since been injured, clearing the way for Big Pete. When your outfield is so dinged up that your current catcher plays center field and your failed catcher plays in a corner, well, you’re in trouble.

Truth be told, O’Brien has launched four homers in just 15 games this season. If that were sustainable, you’re looking at something like 42, maybe 43 home runs over a full season. That’s undeniable home run ability. But with those home runs have always come strikeouts. That’s been the story since day one (at least at the plate). These two things, hitting for power and striking out, have seemingly always been juxtaposed. Some guys are searching for contact, and in an effort to hit the ball consistently, don’t hit it very hard. Some guys are searching for loud contact, and in swinging damn-near as hard as they can, sacrifice the bat control needed to make that contact consistently. It’s not a coincidence that these two things, strong contact rates and strong power rates, rarely align.

It’s rather clear that Peter O’Brien is not Miguel Cabrera. One’s skill set landed him in the majors at 20, the other at 25-year old though both are capable of hitting 40 homers a season in their primes. This is to say, that sacrifice, the one where you swap contact for power, comes at a cost, even when big league clubs will do almost anything to add power to their lineups. If you need any proof on that, just look at Chris Davis‘ contract this winter. While the Orioles are noted for having bid against themselves en route to a 7-year, $161 million offer to Davis, they were willing to stomach a poor fielding out fielder that could help carry the offense by himself some nights. O’Brien is, unfortunately, a worse outfielder than Davis and has struck out 10% more frequently in his limited sample.

To date, even with four bombs in just 15 games, O’Brien has amassed a wRC+ of 29. Nick Ahmed is carrying a 48. At a time when the Diamondbacks are piling up the strikeouts, O’Brien is carrying more than his weight in the whiff department. His lack of ability to recognize and lay off of pitches outside the strike zone is doing him in and threatening to end the Peter O’Brien Experience before it can even fully get off the ground. He’s swinging at 63% of pitches thrown to him, while just 42% are thrown in the zone. His 47% chase rate is something to behold. While he’s swinging at more pitches in the zone than he did in his brief 2015 audition last September, he’s simply swinging more overall. O’Brien did not come here to watch pitches go by. He did not come here to try to work counts. He came here to hit as many baseballs as hard as he can.

And that’s not exactly working out. O’Brien’s zone rate, the rate that pitchers throw him strikes, is in the bottom 5% of the majors. He’s getting more balls than almost any other hitter. Meanwhile, he’s swung at more pitches than any other position player (the only players ahead of him are pitchers Carlos Martinez and Wei-Yin Chen). Those two things do not mesh. Rays shortstop Tim Beckham is the only player making less contact than O’Brien at the plate, but at least Beckham swings 15% less of the time. Put these things all together and Peter O’Brien might just be the worst hitter in the major leagues right now. 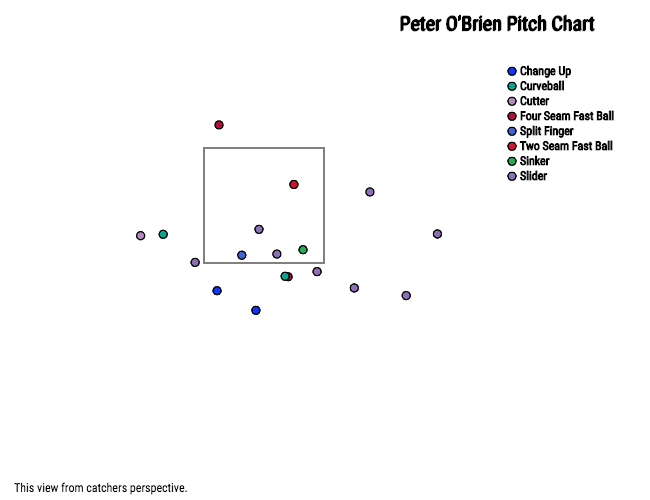 Some of these K’s aren’t even close. Pitchers are well aware of the damage he can do on balls he squares up, so they’ve thrown him breaking balls (sliders and curves) nearly as much as they’ve thrown him fastballs. All seven of his hits (four homers, three singles) have come on fastballs, six four-seamers and one cutter. All have been over the plate, more or less. 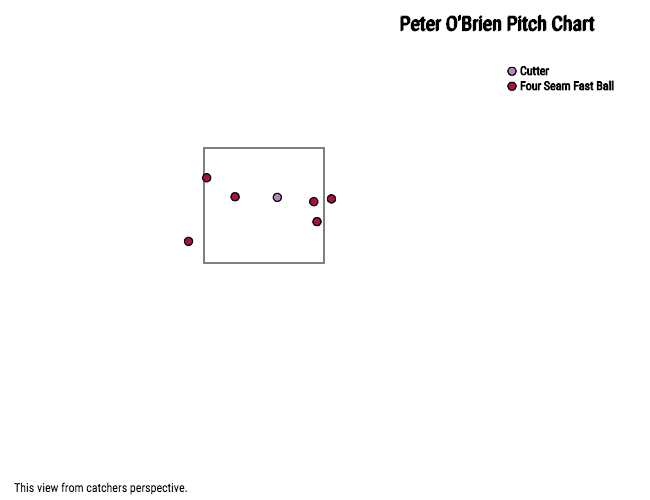 Herein lies the problem: Peter O’Brien is not going to get more fastballs over the plate if he doesn’t stop swinging at everything off of it. When do pitchers most often throw fastballs? The first pitch of an at-bat and when they’re behind in the count. With his raw power, O’Brien may not see a ton of first-pitch meatballs, so it would stand to reason that the best thing he can do is try to work the count in his favor. If pitchers cave in and give him a heater or two in the zone, he can swing away. If they try to make him chase, he can walk, which is contingent on his ability to recognize spin in the first place. Given that he has just one non-intentional walk in his 15 games, I’m doubting this ability.

It’s worth pointing out here that the type of player O’Brien is, the big power/low contact type, may not be the best fit for a place like Chase Field to begin with. As my esteemed colleague Ryan pointed out just last week, the NL West is full of big outfields, providing extra fielding challenges for a lumbering slugger. At the plate, Chase Field (and Coors, too) tend to lift marginal power guys, giving a benefit line drive hitters who can use the park to stretch singles into doubles and doubles into homers. O’Brien has the ability to hit the ball out of any park, and most of his home runs are of the “no doubt” variety. Does it really matter that they end up in the 15th row rather than the 5th? They make for better highlights, but by being a player that doesn’t put the ball in play as regularly as most, the park itself isn’t fully utilized by this type of player. Jake Lamb doesn’t have 70-grade power, but he sprays line drives all over the place. This is surely something to keep in mind.

So what the hell do the Diamondbacks do with Peter O’Brien? Maybe it’s too soon to pick on a guy that’s worked hard to get to this juncture of his career. 15 games is surely a small sample. But we also know that things like strikeout and walk rates tend to stabilize very quickly, which should give you some extra concern in O’Brien’s case, even if you think he’s a better hitter than this (he probably is). This approach of his, the swing at everything one, may have worked in Reno, but it’s not working in the majors as predicted. His audition could have been a worthwhile platform to trading to him at the deadline, but finding a buyer now might prove difficult. Rickie Weeks Jr., Phil Gosselin and Brandon Drury are all better fielders (albeit still below average) and hitters, but there’s not much benefit to making O’Brien a bench player or sending him back to AAA to rake. If Arizona is adamant about getting something out of Peter O’Brien in the short, medium and long terms, there’s really nothing else to do beside keep playing him, even if it makes us cringe. He’ll have to gain some traction over the next week or two, or the team will be forced to move on.

7 Responses to Peter O’Brien is Not Working Out