Finding Another Brad Ziegler Peter O’Brien is Not Working Out

Yeah, it’s no secret, injuries are a part of the game. They suck, we all hate them, and life would be better without them, but they are still very much there. Considering how prevalent injuries are within the game, our understanding of injuries and what causes them, especially with pitchers, still leaves a lot to be desired. About the only thing we can measure in more certain, though not totally exhaustive, terms is the impact and lost value they have on a team.

Nathan Currier’s site, Man-Games Lost, has been near the forefront of attempting to track and quantify injuries across sports. In relative terms, the Diamondbacks have been fairly lucky with injuries. So far, the Diamondbacks are 21st in disabled list games missed with 258 coming into Thursday. Compare that to the Athletics who have lost about 400 more games to injuries and things don’t look so bad. However, the quality of games missed are not distributed equally. In context. the Diamondbacks have certainly suffered as much, if not more than, most other teams. 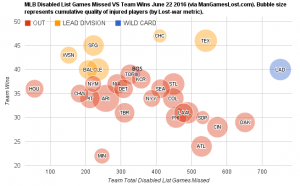 Using Nathan’s IIT-war (i.e., injury impact to team WAR, which “attempts to quantify the impact of a player not playing for their team due to injury”), he estimates the Diamondbacks as having lost over 5.5 wins due to injury so far this season. That’s nearly a full win more than the next most battered team, the Rays, and over four wins more than the aforementioned Athletics. Certainly an imperfect measurement, but it’s not hard to see the loss of A.J. Pollock as a loss that might give a team a large figure head-start in the value lost column. Nonetheless, value lost is certainly dependent on the depth of the team. For the Diamondbacks, the outfield depth has been pushed to the limits this season.

This isn’t to go down the rabbit trail of should haves, because no team plays without injuries – well, maybe except the Astros. Though lost value to injuries isn’t distributed equally, blaming injuries for a poor season is a bit simplistic. The Diamondbacks have made themselves more susceptible larger losses of value to a devastating injury by trading away from a position of strength, the outfield, without addressing the talent gap that has been created. The drop off from A.J. Pollock to his replacement is probably always going to be a decently sized gap. Nonetheless, some parts of that gap can be mitigated.

The loss of Ender Inciarte reduced the team’s defensive flexibility for outfield arrangements and that was never really addressed. The loss of Pollock still would have cast quite a shadow if Inciarte was still around, but the competency of the outfield defense wouldn’t have been near as dire off that loss alone. With the need of having Chris Owings play center to maintain some respectable level of defense, the team’s infield depth has been disadvantaged. The Diamondbacks have either had to give Gosselin that utility slot or have Drury on the bench while awkwardly trying to shoe him in some at-bats – ones he should be getting on a daily basis somewhere else – at the expense of Jake Lamb and others.

Moving from an outfield where Yasmany Tomás is the fourth option to one where Tomás is starting is another primary example of this depth issues. While I have advocated of late for the team to give Tomás an everyday role now that 2016 is probably for naught, that equation looks quite a bit differently if the team is needing to maximize their wins this year as a result of being in a playoff chase. It probably wouldn’t be prudent for a contending Diamondbacks team to start someone who gives up any offensive value he produces with his defense.

Roster construction is messy and there are several interdependent parts. Perhaps the way the injury luck turned out stacked the deck so heavily against the team that the extra outfield depth still wouldn’t have made a large enough difference independent of the other issues the team has had. However, the process is what’s of note – a process that allowed Yasmany Tomás to be a starter with Rickie Weeks Jr. and Chris Owings as the next men up. Flexibility plays a role in a team’s building of depth, and in the outfield, the Diamondbacks don’t have much of either.