If the baseball season was akin to a round of golf, the Diamondbacks would have spent Thursday at the clubhouse, refreshing their supply of balls and grabbing a quick sandwich after just finishing the first half of their round. With the team now 50% of the way through the season and heading for the back nine, now feels like an arbitrarily nice time to see how the offense has performed relative to expectations.

2016 has not been the season the Diamondbacks wanted, but it’s roughly been the one many prognosticators had assigned to them prior to the season. Dave Stewart, before the season, lashed out at the notion of the Diamondbacks projections of 78 and 79 wins by PECOTA and Fangraphs respectively, “To think we will only win 78 games? That’s a joke.” Certainly at this point, Stewart looks the part of the fool, with the team on pace for a meager 72 wins by their winning percentage or 74 by their run differential and PECOTA and Fangraphs both forecasting the team to finish with 75 wins. There’s consensus any way it’s sliced, this hasn’t been a very good team. Nonetheless, it’s tough to make the case that the projections deserve much credit for their apparent accuracy, as Dave Cameron wrote at the end of May:

Of course, the pitching has been a disaster, but it’s not like Shelby Miller was obviously going to turn into a pumpkin overnight, or that Patrick Corbin was going to obviously regress after pitching well in his return from Tommy John surgery in the second half of last year. If Greinke, Miller, and Corbin were pitching to the level that our forecasts projected before the season instead of combining for a 5.15 ERA over 178 innings, the D’Backs would be north of .500, and right in the middle of the wild card race. It wouldn’t be fair for us to proclaim that we saw this coming when the D’Backs season has gone wrong for reasons that have nothing to do with why we thought the team would struggle.

Simply put, the team isn’t failing for the reasons that might have been foreseeable, if relying on the projections. A month later, with respect to Cameron’s article, and the story is pretty much the same, the pitching has been the anvil around the neck. Before the season, PECOTA pegged four of the current starters with ERAs well below four and Bracho, Burgos, Chafin, and Marshall as all being serviceable out of the bullpen. In actuality, the starters have a combined ERA of 4.80 and the bullpen isn’t looking much better with their 4.43 ERA – both have been walking batters at concerning rates. Heck, Jeff has written not once but twice about the pitching woes within the last ten days, obviously for good reason. The pitching was supposed to be a possible strength for this team.

Nevertheless, the team is roughly on pace to hit pretty close to that 78 win mark as things stand. But in a sense, things have to be somewhat zero-sum. If a perceived strength is actually a great weakness but the outcome is roughly the same as expected, it would appear to follow that there was some perceived weakness that has actually been closer to a strength. One could reasonably make the latter out to be the case of the Diamondbacks offense. Though perhaps not a powerhouse, the offense has been relatively productive. The position players as a whole are 6th in MLB in wOBA, 13th in wRC+, and 7th in base running.

While the team is directly in the middle of the pack at 15th in runs scored, that doesn’t really capture how good the offense has been. Using BaseRuns, which attempts to take out the randomness of hit sequencing with regards to runs scored, essentially the order in which teams accrue their hits, allows us to have a better understanding of how much this team might be getting unlucky. There’s a pretty notable difference between a team having two deep fly outs followed by three singles and another fly out. Depending on the sequencing, or order, of those hits and outs, a team could score anywhere from two to no runs. BaseRuns tries to account for that randomness. It calculates the Diamondbacks as being 7th in runs scored, averaging 4.87 runs per game – about a third of a run per game difference from their actual number, 4.53 runs per game. Another measure that offers some support to this notion is the wonderful statistic of Cluster Luck, be sure to read that carefully. Through June 29th, the Diamondbacks were second to last in offensive cluster luck, being a dismal 30.4 runs worse than the average assumption of luck. Comparing that with BaseRuns that sees the Diamondbacks as being 27.5 runs better than what they’ve scored, and there is at least some corresponding evidence that would support the notion that the team has been a bit better on offense than what the bottom line would show.

However, there could be an alternate explanation for the team’s apparent inability to score as many runs as they should be, one that was thrown around on the Diamondbacks radio postgame show Diamond Talk. After Wednesday’s game, it was suggested that the hitters, more specifically the younger ones, need to improve their approach with men on base. On the whole, the offense (this will be just position players for the purposes of this discussion) has certainly had worse results with men on base opposed to the bases being empty – the team’s wRC+ drops from 107 with the bases empty to 98 with men on base. While the team garners more walks and fewer strikeouts with men on base, the team’s BABIP drops from .336 with the bases empty to .316 with men on. Perhaps that’s another case of luck or lack-thereof, but without comprehensive exit velocity data, it’s certainly plausible that the attempts to put more balls in play with men on base results in a greater proclivity for weakly hit balls – balls that are more easily converted into outs, thus lowering a team’s BABIP. 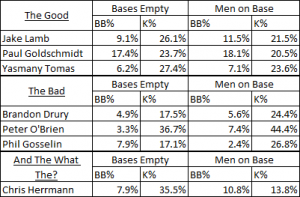 n an individual basis, there certainly is some merit to the idea of some of the Diamondbacks players needing to improve their approaches with men on base. While guys like Jake Lamb, Paul Goldschmidt, Chris Herrmann, and yes, even Yasmany Tomás have been more selective with men on base, others like Brandon Drury, Peter O’Brien, and Phil Gosselin have regressed in their approaches, proving more apt to strikeout with men on base. While the ability to draw walks and strikeout doesn’t perfectly capture the hitters’ approaches in varying circumstances, it at least provides a basal look.

Now that we’ve broken things down to the individual, let’s go back to Dave Cameron again, “Our projections didn’t like the Diamondbacks because it had a negative view of their role players, thinking that this was basically a stars-and-scrubs team that relied too heavily on a few elite players. But so far, those role players have been carrying the team, keeping it afloat while the big names struggle.” He goes on to list the contributions from Jake Lamb, Jean Segura, and Welington Castillo as being notable contributors to the team. They’re also players who’ve been overplaying their projections. For their part as a unit, most of the offensive players have overplayed their PECOTA projections. Of the top 10 players by plate appearances, eight of them have higher true averages, Baseball Prospectus’ all-inclusive offensive metric. Combined, their OPS is .795, quite a bit higher compared to what PECOTA projected before the season, .737. As far as the two main contributors who’ve underplayed their projections, Peralta and Ahmed, it’s at least been by relatively small margins.

People seem to fall into the trap of evaluating outcomes without consideration for the process. The outcome for the Diamondbacks thus far has been a predictable one for many, until the process is considered. Really, the team has been a confounding one on a variety of levels. Perhaps most confounding is the utter failure by the pitching unit. What shouldn’t be lost, though, is the promise shown by this Diamondbacks offense. We’ve written a lot about Jake Lamb here and for good reason, but the offense as a whole deserves some recognition as a unit. Heading into the back nine, they’ve been in fine form.