Sweating the Details of the D-backs’ New Humidor

It’s not often that ballparks undergo major changes, especially not in-season. Tal’s Hill was removed in Houston but it’s not like the took a bulldozer out there in the seventh inning against the Mariners to get the job done (trust me, it wouldn’t have helped the M’s). Renovations have continued at other venues, including Chicago (Cubs) and Kansas City. And while the Diamondbacks may be arguing that Chase Field is in need of upgrades and should be transferred to someone else’s control other than Maricopa County, they’re moving forward with their own changes. Except, these are changes you won’t see. Or maybe you will. You probably will.

The Diamondbacks are installing a humidor.

When I tell people about Inside the ‘Zona, I tell them, “we’re the website that has advocated for installing a humidor at Chase Field.” Some make a cigar joke, but for many, it’s a reference point to what this website is all about: thinking about the D-backs differently. Maybe nothing epitomizes that notion more than changing the park factors in Arizona. Known for hot, dry air, the ball notoriously flies. That knife cuts both ways, however, and for every bit as good as it’s been for D-backs hitters, it’s been just as bad (or worse) for D-backs pitchers. Granted, no one has it worse than the Rockies at Coors Field, but pitching at Chase is the next-worst alternative. The idea of pitching half the season in a place where the ball has reduced grip and flies extra far is less than encouraging.

That’s not new information — you’ve probably come to understand it by now, even if all you’ve ever done is watch a dozen ballgames. But Ryan P. Morrison has dug into this arena extensively in the past as it pertains to the Diamondbacks, and I’m going to borrow liberally from him. So let’s refresh our memories (or make new ones!) and pull some nuggets from deep in the files to figure out how this is going to impact the Diamondbacks.

The humidor is set to be completed in the next 4-6 weeks, “before the summer months set in,” according to Derrick Hall. And to get at that, we have to understand what a humidor is. The best I can explain, it’s a storage chamber where baseballs will be stored before games. It’s climate is controlled to sit at 70-degrees and 50% humidity (governed by MLB). Compare those numbers to average game time temps and humidity at Chase Field and yeah, that’s a stark contrast. It’s routinely 95-degrees-plus at first pitch in Phoenix with humidity in the teens or single digits. If you’ve got a wet pair of shoes, you can leave them outside, in the shade even, and they’ll be dry in short order. Put them in a humidor and they’ll remain damp for a very, very long time.

Baseballs aren’t shoes, but you get the idea. The balls will stay relatively cool and will absorb the moisture created by the humidity. This has two effects: the balls will weigh more because of the added moisture from their artificial climate, and they should have a bit more grip as the moisture makes them tackier. From here, there are some obvious takeaways, which I’ll summarize from Ryan:

All of this adds up to balls traveling a bit less when hit. How much less? Dr. Allan Nathan tackled this subject in his work back in 2011. From Ryan:

You can read the piece to get his “rough analysis,” through which he concluded that the number of home runs at Chase Field might be reduced by 45 percent (error bar of 9%), 1.5 times that at Coors. When he did a more detailed analysis (not published, unfortunately), he concluded that the Chase Field reduction would be 37% (error bar of 6.5%). (In 2013), 146 home runs were hit at Chase — if we apply that 37% plus or minus 6.5% reduction, that 146 HR figure would get reduced to 92 home runs, or between 82 and 101 home runs (using the error bar).

If that sounds like a pretty drastic reduction in home runs, that’s because it is. The humidor could have massive consequences at Chase Field as we’ve been chirping about for nearly three years. Now we’ll get to test the hypothesis and see the results right before our very eyes.

Keep in  mind, the humidor won’t likely be installed for a few weeks, so let’s call it June 1st. With only four months of the season remaining, roughly, after the humidor goes into action, we won’t see the entire penalty described by Dr. Nathan above. Still, it should have a pronounced effect. On average, since the beginning of the PITCHf/x era (2008), nearly 63% of the season’s home runs at Chase Field have occurred on June 1st or after. 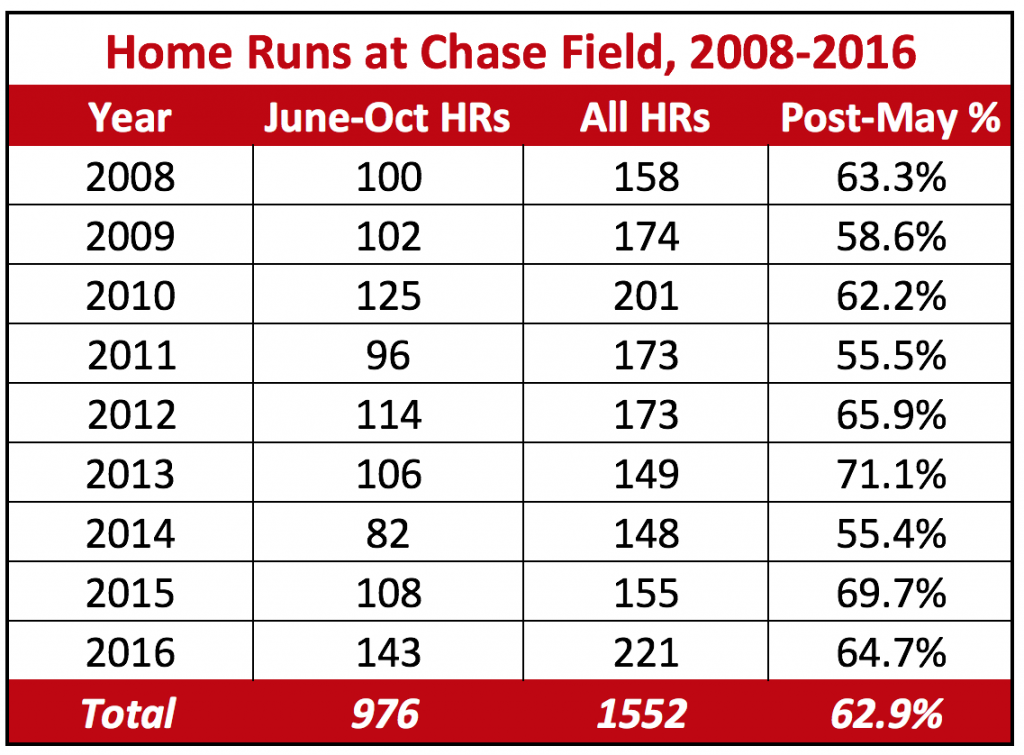 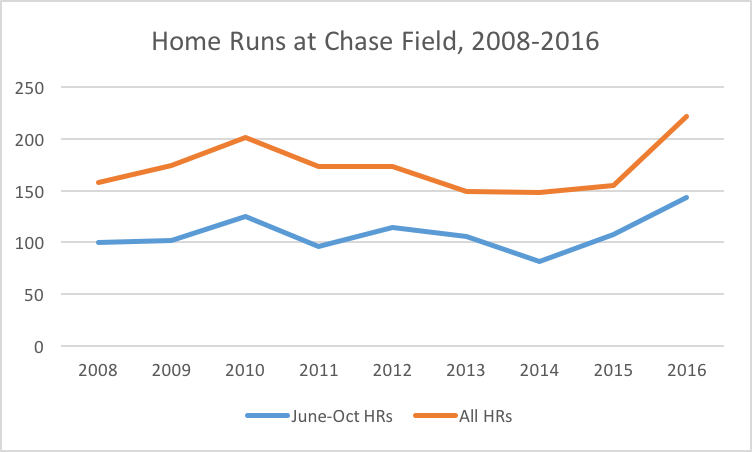 In the new era of increased home runs in baseball, which saw a massive uptick last season and prompted questions about the integrity of MLB’s baseballs, maybe we project that a similar number of home runs will be hit at Chase Field this year as occurred last year. Let’s call it 220 for the season. If we take our 62.9%, the average percentage of home runs hit on or after June 1st when we can safely expect the humidor to be in place, that would project about 138 homers to be hit at Chase once the humidor is installed. And, if we apply Dr. Nathan’s findings and reduce the frequency of home runs (37% +/- 6.5%), perhaps we see somewhere in the neighborhood of 77-95 home runs instead of the non-humidor-effected 138. That’s a drop somewhere in the between 43-61 home runs after June 1st, surely a stunning total.

Now, I should state that there are some inexact estimations in there. Dr. Nathan’s model took the entire season into account, which includes the cooler months of April and May. Applying the entire model to just the hottest months of the year complicates matters far beyond what I’m able to replicate, so perhaps we see a few more homers than what was calculated above. Still, we’re looking at sharp decline even if we give a little back due to the climate of June-October in Phoenix.

Obviously the drop in home runs will benefit the pitching staff. If they can surrender 20-30 fewer homers at home from June through the end of the season, that’ll drop some ERAs. The biggest beneficiaries are those who surrender the most home runs, including Shelby Miller, Taijuan Walker and Robbie Ray. Relievers will get the benefit, too, notably those with fly ball tendencies like Silvino Bracho, Jake Barrett and Randall Delgado. No one is going to complain about D-backs pitches giving up fewer #DINGERZ.

On the flip side, this will impact the hitters. As I’ve said before, the knife cuts both ways. Those who hit the most fly balls will see the biggest penalty. Power hitters who derive a good chunk of their value from the long ball will also see a big impact (looking at you, Yasmany Tomas). But here’s the thing that may just help ease the pain: the Diamondbacks aren’t built upon batters looking to hit towering fly balls. Instead, the team is built upon a line-drive approach, hitting the ball hard to all fields and taking advantage of Chase Field’s large dimensions. We’ve talked about the merits of this approach before, and now that a humidor will be in play, line drives may become even more valuable at Chase.

This is all a long way of saying that while both the home and road teams will pay an equal penalty to the humidor, the D-backs may come out ahead. They have a staff of pitchers that have had trouble with the long ball who should receive some added benefit. Meanwhile, they don’t rely on hitting home runs to put tallies on the scoreboard and use a line drive approach to get the job done. Just maybe, at least in the short term, this can push the ballpark in the favor of the Diamondbacks ever so slightly.

Long-term, we’ll learn more about the effects of the humidor at Chase Field. While it’ll surely cut down on some home runs and maybe some long doubles in the gap, it may allow a few extra balls to fall in front of outfielders rather than carrying out to them. We don’t know yet, but that’s one possibility (though I’m sure the pitching staff will trade some extra-base hits for singles).

It may also impact the way that Mike Hazen chooses to shape his team down the road. More forgiving home run rates in the team’s home park will allow some wiggle room when acquiring and developing pitchers. It may also shape which types of hitters the team acquires and develops, prioritizing those who hit the ball hard to all fields rather than your prototypical sluggers. We don’t know for sure yet, but after even four months of data, we should have a better idea of the humidor penalty on batted balls and be able to analyze the team with this in mind.

The humidor is just the latest of many ideas from this website that we’ve seen implemented since Mike Hazen took control. We’ve seen an increased focus on catchers that can frame, we’ve seen changes to pitch repertoires, and we’ve even seen some changes at the minor league levels transitioning prospects into the roles that suit them best. On the one hand, that’s exciting to see. On the other, we’re now in a position to evaluate if these strategies have the kinds of benefits we’ve long predicted. Single, and even partial seasons of data can be tough to read, but we’ll finally get to test some theories this season and the humidor just the latest experiment. It’ll surely be a fascinating one.

Dr. Nathan recently published a piece at The Hardball Times updating his projections for the humidor effects on Chase Field. He used a new model using StatCast data to forecast the humidor’s penalty on batted balls and came to some new conclusions, though they’re still widely variable. I suggest reading through the link above for a new, although not wildly different, take on what the humidor may do from the authority on the matter.